The Policy and Conflict Resolution Studies Center in Arab American University hosted the well-known Palestinian intellectual Prof. Rashid Khalidi - Edward Said Professor of Arab Studies at Columbia University to an online symposium via Zoom to launch his new book “The 100 Years’ War on Palestine: A History of Settler Colonization and Resistance, 1917-2017” 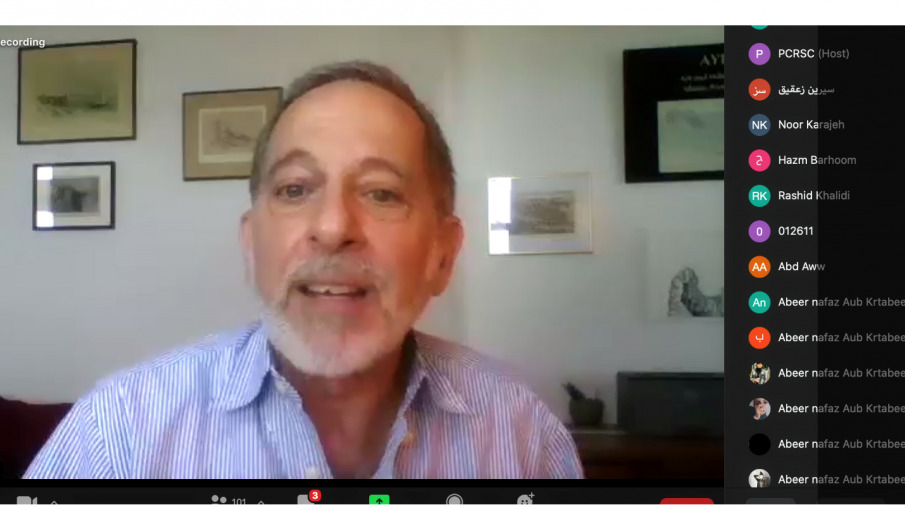 Ms. Rula Shahwan – the Director of the Center started the symposium by welcoming the guest and the audience. She indicated the importance of such dialog and academic seminars and its role in enriching the knowledge of AAUP students in specific and the Palestinian students in general.

The dialog was moderated by Dr. Nahid Habiballah- the Social Sciences Professor and a Faculty member in the Faculty of Graduate Studies in Arab American University.

In this symposium, Prof. Khalidi talked about his new book and asserted on the specificity of this book as he used a historical narrative methodology for the first time which was different than any of his previous books about the Palestinian cause. Prof. Khalidi asserted that he aimed for this book to be directed to the American and western audience trying to gain their position to be in favor of the Palestinian cause and to show the falsehood of the Zionist narrative that is dominant in these societies.

Prof. Khalidi clarified that the conflict is not between two different nationalities or peoples, but it is a targeted attack from the world's largest dominant force against Palestine. Also in his book, he talked about some personal experiences for his family and friends considering this to be a new framework and approach for the American reader in particular.

Prof. Khalidi asserted that there are some people that were completely annihilated as the Native Americans in North America, and said that this is impossible to happen to the Palestinian people as the colonialism settlement has become unacceptable and illegal, and the Palestinian people resistance against the Israeli occupation is now guaranteed by the international laws. And so he thinks that Israel will not be able to succeed in destroying us and uprooting us from our land.

Moreover, Prof. Khalidi compared the Palestinian situation to that of the Algerian people and the Irish people situation along with other countries that faced colonialism, withstood it and finally liberated. He clarified that Edward Said talked about the cultural dominance of Zionism and that this dominance in education and in the academic field is about to end, especially that the Zionist narrative that occupied the world for the last 100 years is now not easy to be believed in as it was in the past. He asserted that Palestinian academic and culture presence is very strong and this allowed the Palestinian narrative to be strong and see the light in a way that was not possible in the last 100 years’ of war on Palestine.

This symposium gathered a wide participation of students from the graduate programs of the Conflict Resolution and the Intercultural Communication, in addition to the participation of academics from different Palestinian universities including University of Hebron and the Islamic University of Gaza. The audience showed a great interaction with the guest speaker and asked him many questions about his book and about the Palestinian case in general.

At the end of this meeting, Dr. Habiballah thanked Prof. Khalidi on behalf of the Board of Directors of the center, and expressed her appreciation to this rich and valuable dialog. She also invited Prof. Khalidi to visit Arab American University as soon as possible. Prof. Khalidi expressed his happiness with this participation and thanked the Policy and Conflict Resolution Studies Center for this meeting that gathered academics and students from different places in Palestine.