AAUP and the Palestinian Youth Association for Leadership and Rights Activation- PYALARA have organized an electoral debate for Arabic Language and Media students. This debate was organized in partnership with the Palestinian Journalists Syndicate and the Central Elections Committee and aims to form a pictorial syndicate for youth journalists. 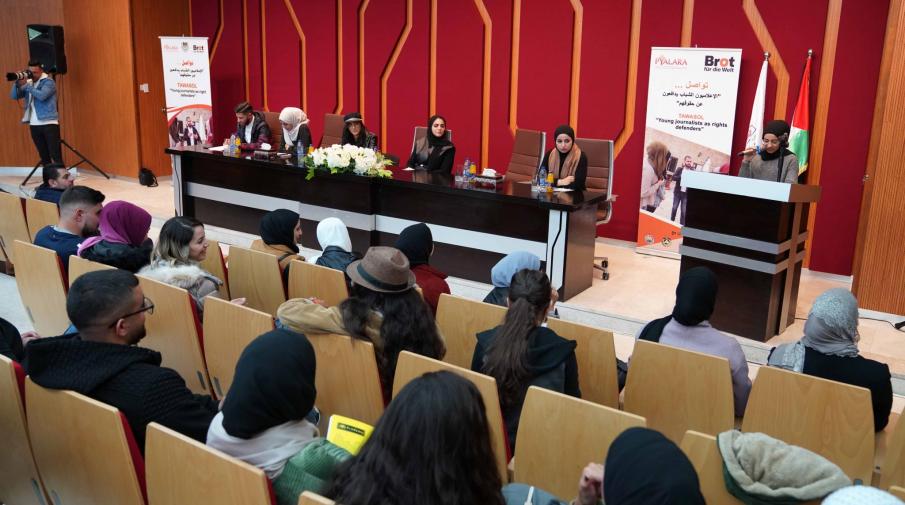 PYALARA has launched this initiative entitled “Communication”, aiming to engage youth in the syndicate work by forming pictorial syndicates in the Palestinian universities.

The project started after signing an agreement between AAUP and PAYALARA, and then interviewing some students from the Arabic Language and Media Dept. in the Faculty of Arts who applied for this project. 30 students were chosen to be trained on many aspects that will raise their capabilities as media students to understand the syndicate concepts, the election process, freedom of speech and the rights and duties of journalists. After this, the nomination for the youth journalists syndicate will open for them where 17 students can be nominated and compete against each other, but only 7 to be chosen to join the syndicate.

The duties and tasks for the Youth Journalist Syndicate members will be to defense the Arabic Language and Media students’ rights in specific and journalists in general, and to improve the education in the department. In addition to implementing many media related activities that help in improving the youth media professionals.

Dr. Marwan Abu AlRub- the Dean of the Faculty of Arts started the activities of the debate by welcoming the guests and explaining this initiative that is compatible with the goals and the vision of the AAUP which aims to build partnerships with local community and institutions. Dr. Abu AlRub added: “in AAUP and in the Faculty of Arts, we have a distinguish department which is the Arabic Language and Media Dept. that many students graduated from it and became journalists, media professionals and teachers, who proved their competences.”

Yanal Nabali- the Project Coordinator and the Representative of PYALARA appreciated the role that AAUP does in hosting the initiative and engaging students in the youth activities. He explained that this syndicate activity will teach students how to get their rights. He added that after electoral advertizing where nominated students will present their electoral program to convince students, 172 students of the Arabic Language and Media Dept. will be allowed to vote to form the youth journalist syndicate.