Prof. Ali Zeidan Abu Zuhri- the University President received a delegation from the Palestinian Businessmen Association headed by the Head of the Association, Mr. Mohammad Al Amour who visited the university to see its buildings, facilities, academic programs and the services that AAUP provides to the local community. 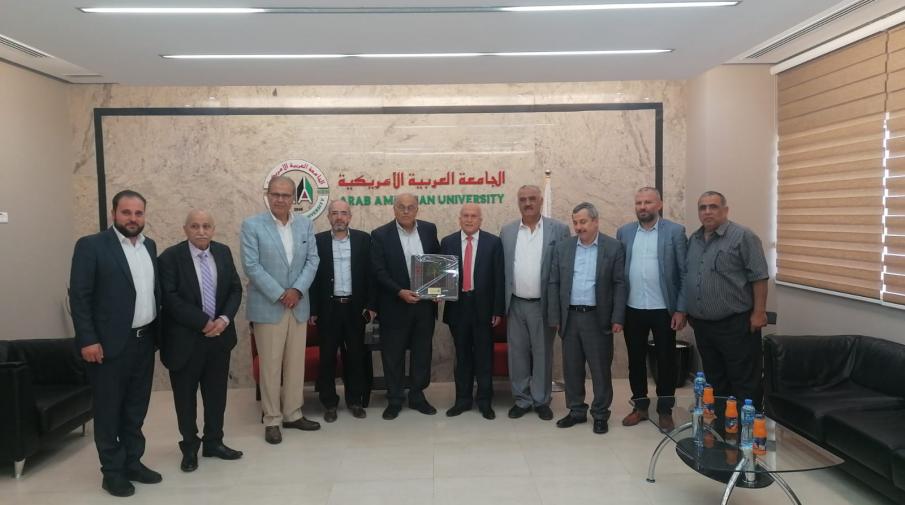 Prof. Abu Zuhri welcomed the guests and talked about the university, its academic programs and the services that it provides to the local community and to its students. He ensured that AAUP has embodied a unique social fabric as it combined between Palestinian students from all over Palestine under one umbrella, and added that the university had faced many obstacles during its growing but the investors' insistence to go on with building this edifice and to not giving up was great. Arab American University has reached this great stage and now is seeking to opening new and one of its kind programs according to international and modern standards.

Prof. Abu Zuhri added that when putting the founding stone for the university, this area was empty with no people living around, but now you can look around and see buildings, facilities and a whole college city that can provide all the needs for its people. This in turn encouraged the businessmen to invest in the area; especially that AAUP has many academic relations with other Arab and global universities.

Mr. Mohammad Al Amour- the Head of the Palestinian Businessmen Association expressed his pride in one of the most famous places in Jenin city, which graduated many Palestinian students. He expressed that he and all the members of the Palestinian Businessmen Association are ready to support Arab American University in delivering its academic, patriot and social message. Mr. Al Amour also talked about the Association that contains people from the different industrial, commercial, agricultural, medical and health sectors who have a mission to support the steadfastness of Palestinians on their land.

During the meeting, Arab American University presented a documentary about the university and the members of the association expressed their admiration in this great edifice and their pride in having a university in Palestine that competes other Arab and international universities, and how AAUP has put itself on the global map despite all the obstacles that it faced.