Deputy Ayman Odeh: “The Arab American University is a National Project and a Pride Testimony for the Palestinian People

The Chairman of the Arab Joint List Member of Parliament (MP) Ayman Odeh said that the Arab American University is a pride testimony for the Palestinian people, and a purely Palestinian National Project, and is one of the prestigious institutions that embrace the Palestinians from different parts. 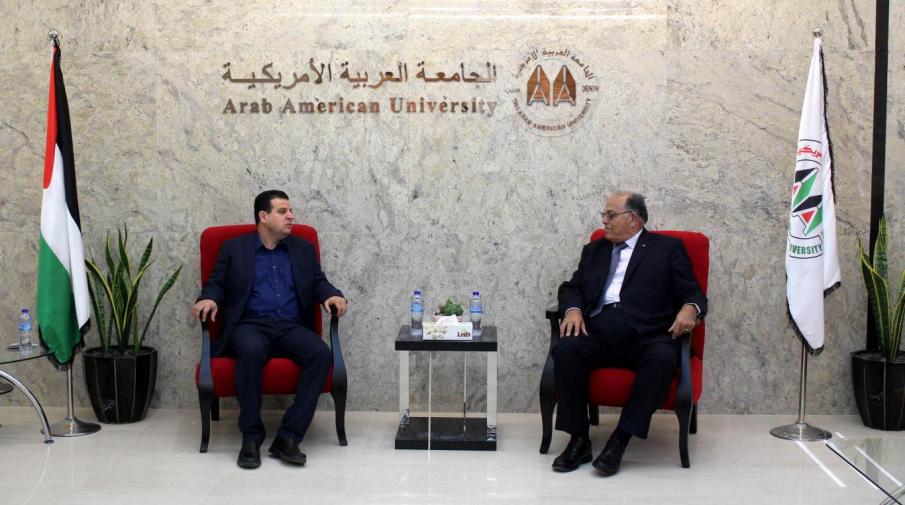 This was during his visit to the Arab American University, which hosted him in a seminar entitled, "Palestinian identity and belonging," and to meet with university students.

Deputy Mr. Odeh was greeted by the President of the Arab American University Prof. Dr. Ali Zeidan Abu Zuhri, in the presence of member Board of Trustees of the University the businessman Walid Afifi, and the head of the Nazareth Association for Culture and Tourism Mr. Tareq Shehadeh, and a representative of the Communication Committee in the Palestinian Liberation Organization Mr. Annan Addik, and deputies and assistants to the University President, and Deans of Faculties, and Heads of Departments, and the chairman and members of the student council.

The President of the University Prof. Dr. Abu Zuhri has welcomed Deputy Mr. Odeh and he provided him a detailed explanation on the establishment of the university, and its faculties, academic programs, facilities, developmental projects, future plans, noting that the university is heading towards universality.

This was followed by a symposium moderated by the Professor of Media at the University, Saeed Abu-Mu'alla, and was opened by Rector Prof. Dr. Ali Zeidan Abu Zuhri with a speech where he stressed that the Arab American University will never surrender and does not accept division nor differentiations and descriptions of racism, and that the university is a national project par excellence and will remain a model to all the educational institutions, for it compiled all spectrums of the Palestinian people under its shade.  He then praised the role of Deputy Ayman Odeh who is known as the valiant fighter in defending the Palestinian rights in the territory of 48.  He explained that the importance of this symposium is to emphasize the embodiment of the relationship between parties of the homeland.

For his part, Chairman of the Arab Joint List MP Ayman Odeh began his lecture by expressing his great admiration to the Arab-American University, pointing out that is  a national project and a testimony of pride for all Palestinians wherever they are, and it is one of the prestigious Palestinian institutions which everyone testified for it, and which will be a key supporter for the independent Palestinian State, expressing his willingness to provide any service for this university and to provide it with whatever it needs because it deserves.

He said, "There are some people who name us 48 Arabs, or Arabs of the inside, or the Palestinians of the occupied territory in 48, and many other different names, but I'm saying here, that we are deeper than 48, because our history is beyond this year and the Revolution in 36, and even we have Al-Shafe'i.  We were not born only in the year 48, and we did not go beyond its wall, but we are Palestinians Arabs, and we as a people we have national affiliation as well as we belong to the Palestinian Issue. "

Deputy Odeh added, "The israeli establishment has launched on us the name of Arab-israeli and in this equation they want to distort our nationality, which means that we are Arabs talking our mother tongue, and distract from us the concept of nationalism, in that we are distorted Arabs.  But our formula equation is that we are Palestinians Arabs 100% and at the same time 100% citizens.  That is their equation, and this is our equation."

He wondered how can we build a Palestinian identity under the divisions 48 and 67 and the Gaza Strip and the Diaspora and so on, pointing out that it is necessary to issue a collective decision for all Palestinian factions, explaining that the Palestine Liberation Organization include all Palestinians except Palestinians of 48 for  several considerations, and stressing that the Organization cannot be bypassed but we must strengthen its role, and therefore, it has to propose and there has to be collective decision that brings together all the Palestinian factions.

Deputy Odeh pointed out that there isn't functional-sharing and communication between Palestine parts, but we share in ties and visits, but, institutionalized functional-sharing is non-existent, calling for the preparation of an action plan for advancement of the Palestinian people in order to move forward, and here comes the role of the Palestinian youth in the embodiment of relations and strengthening the communication between all parties.

At the end of the seminar Deputy Odeh listened to the questions and queries of students and the audience, and he met with students from the inside territories and listened to their needs.

This was followed by introductory round about the university faculties, its departments, laboratories, facilities, and its developmental projects. 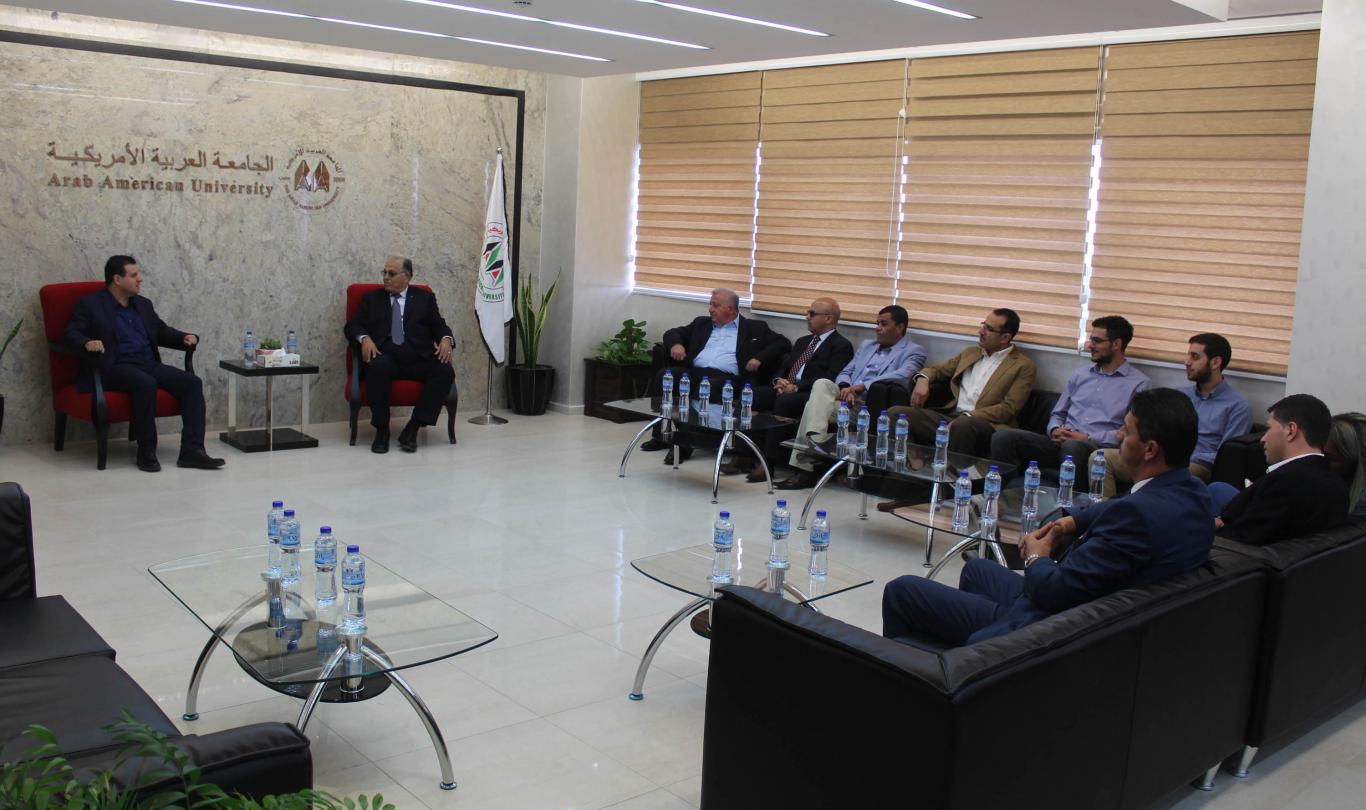 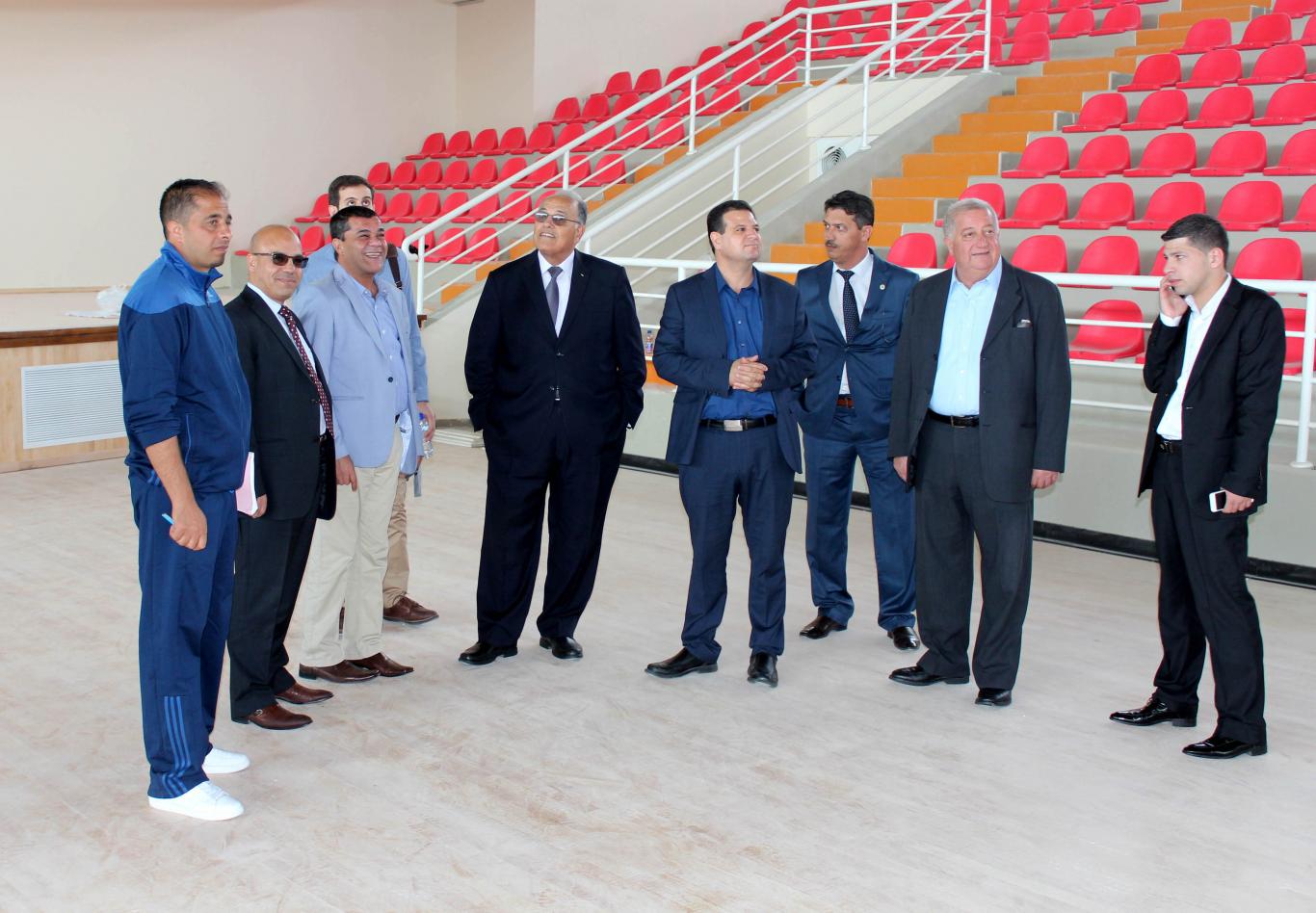 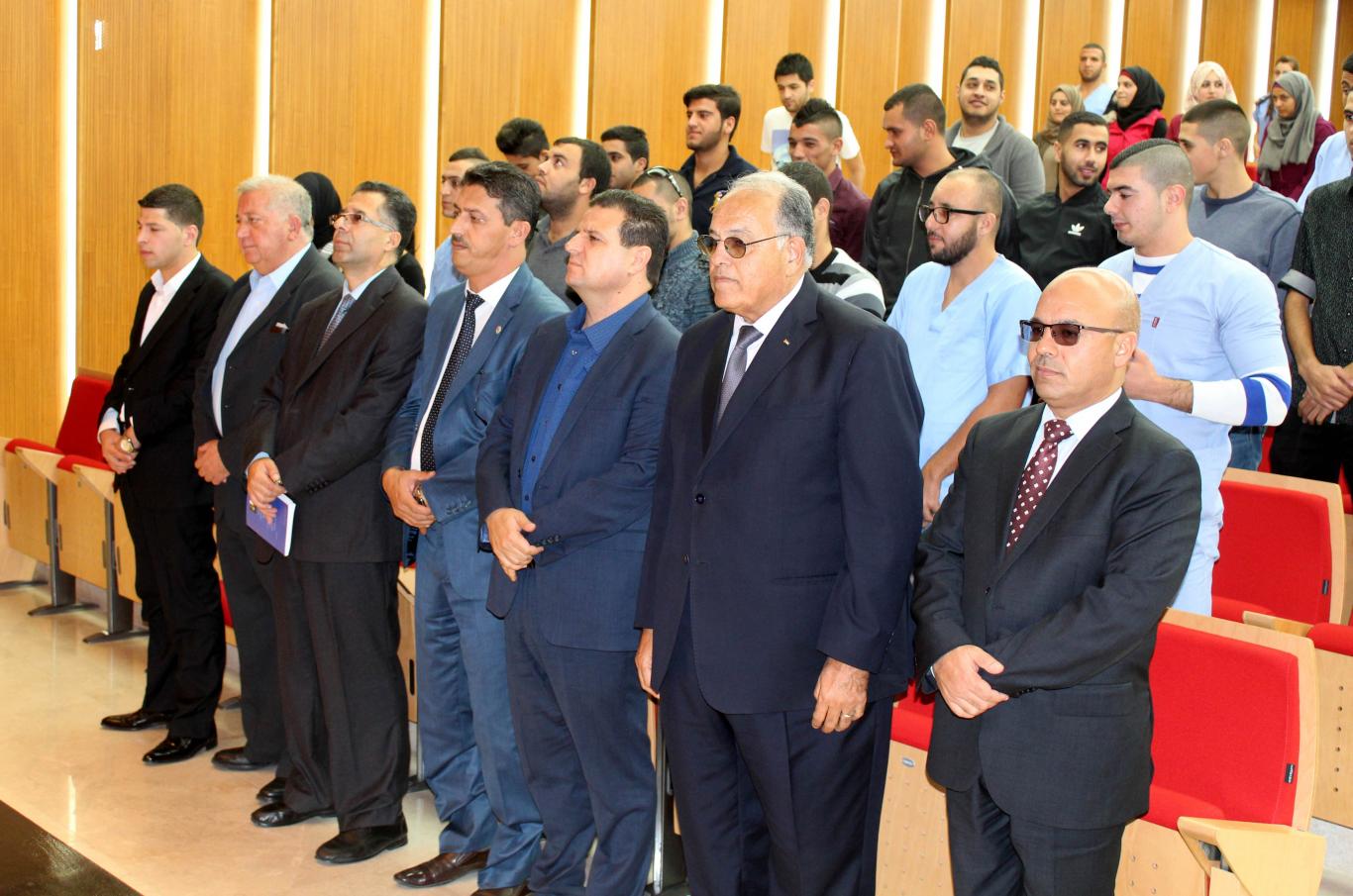 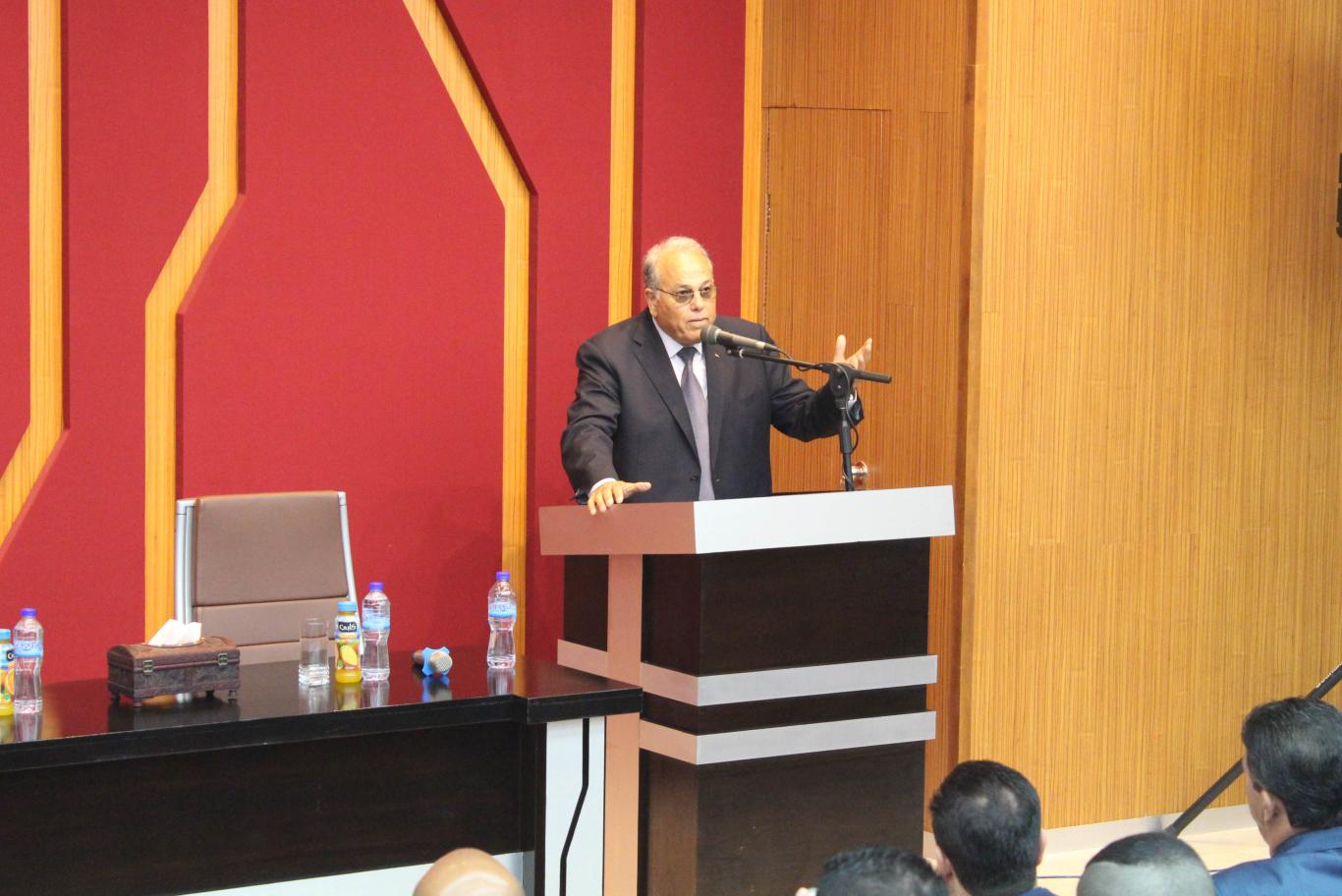 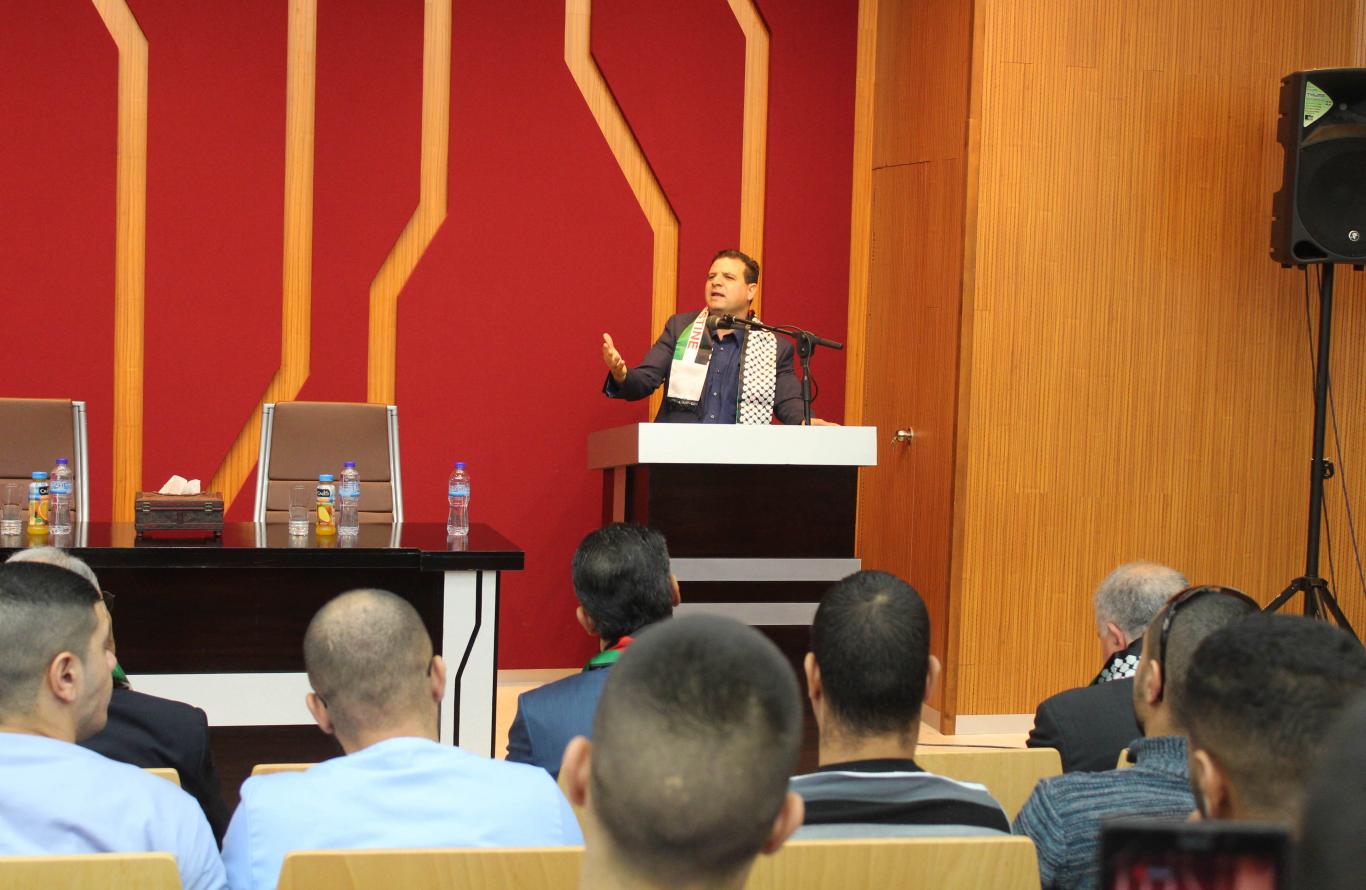 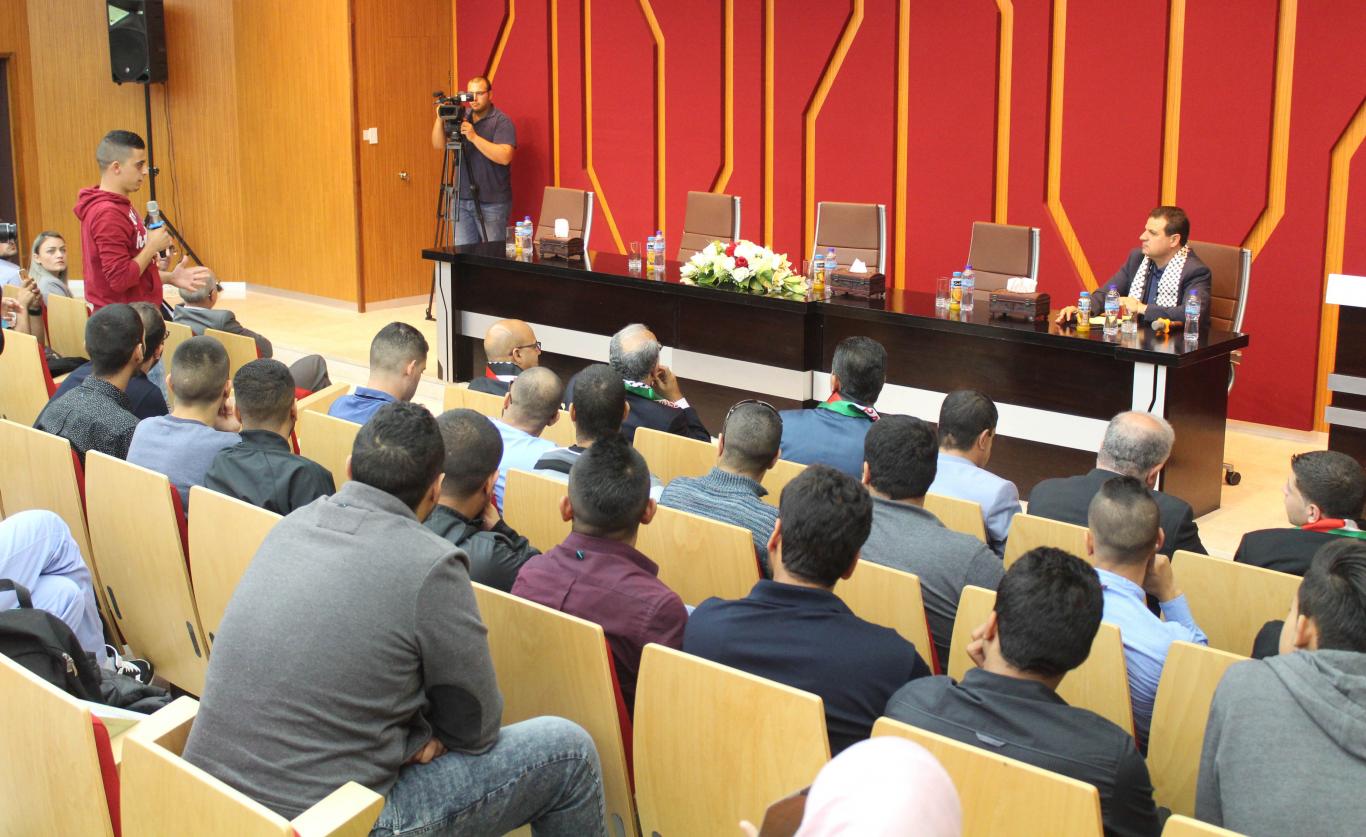 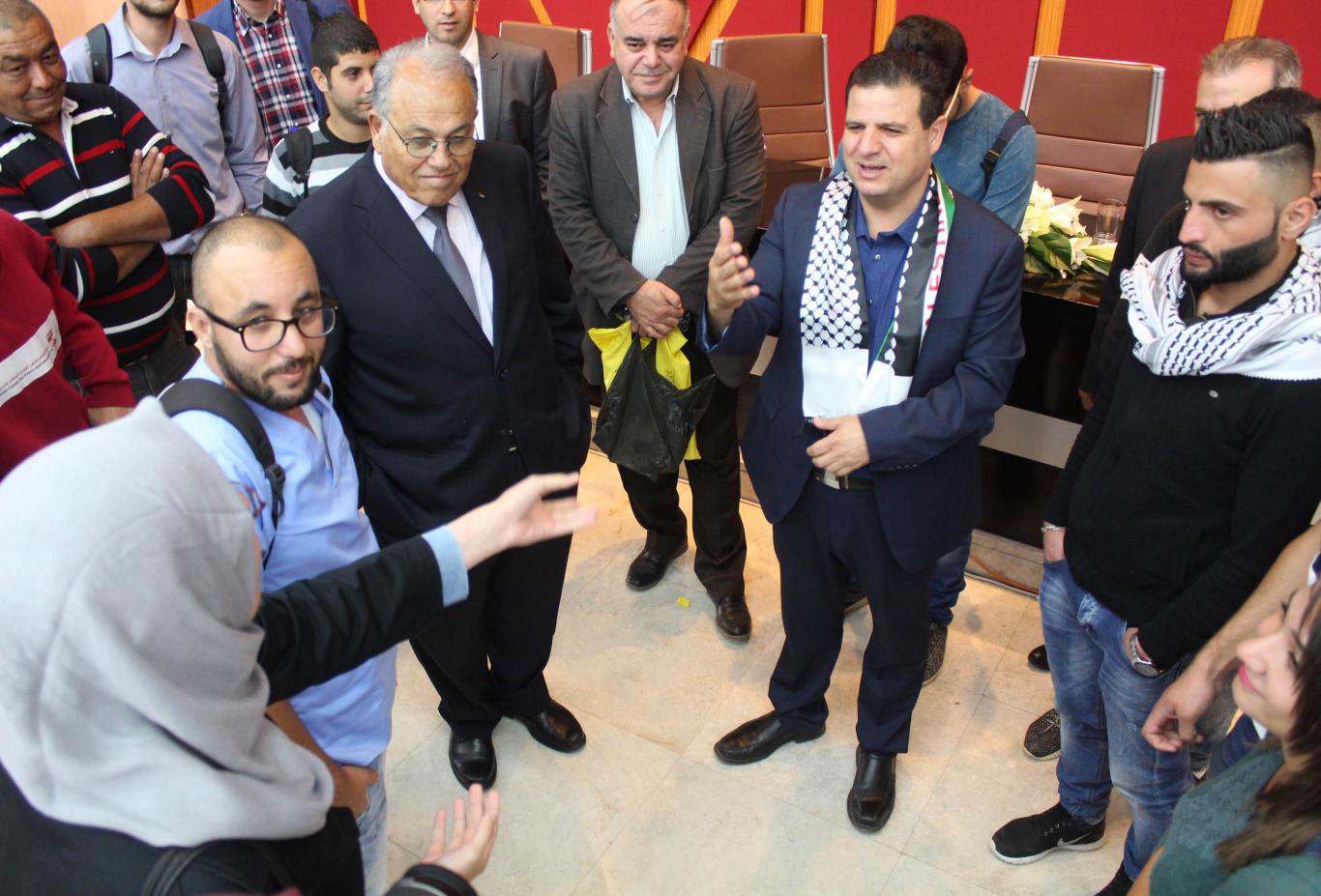 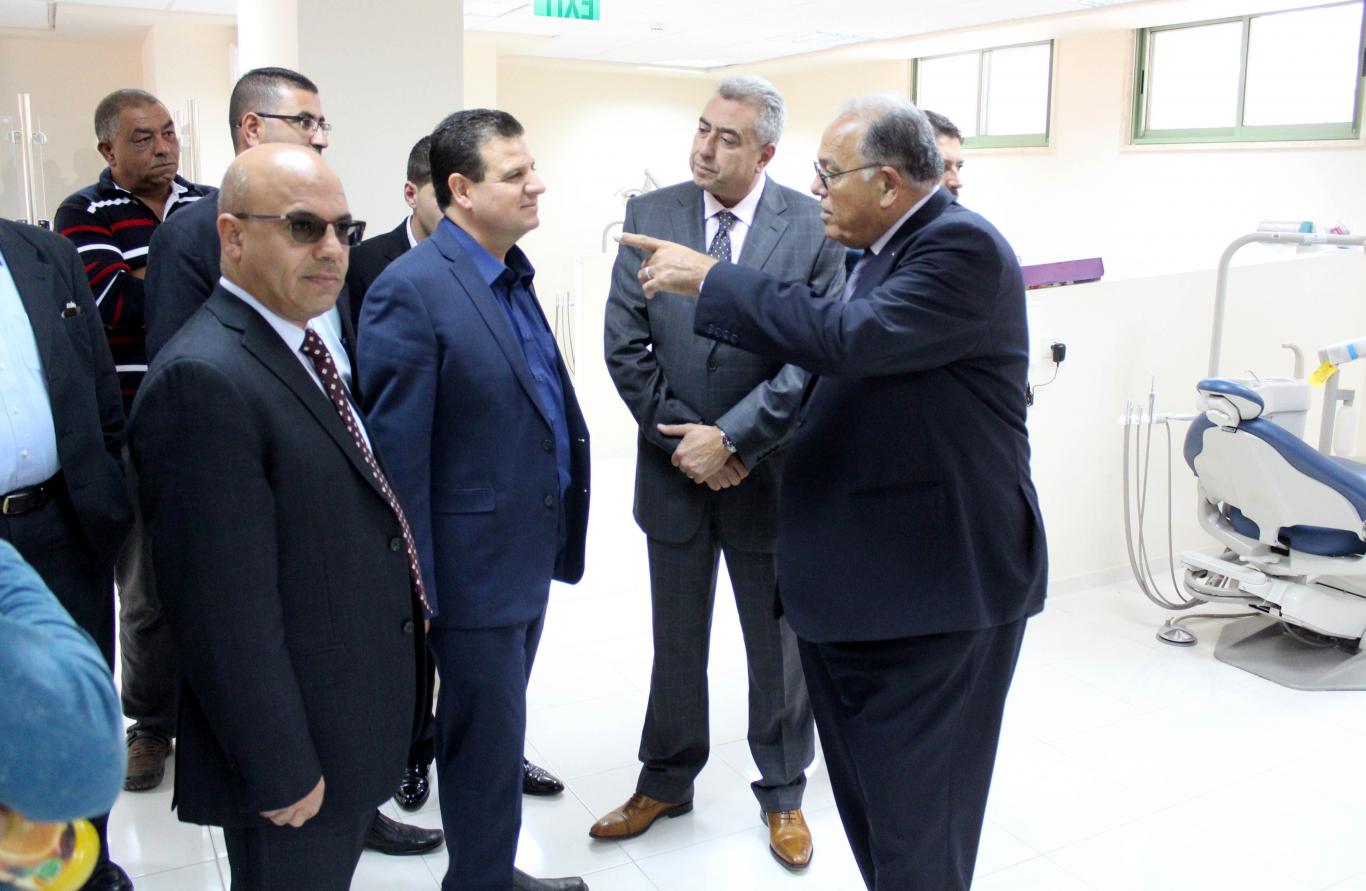 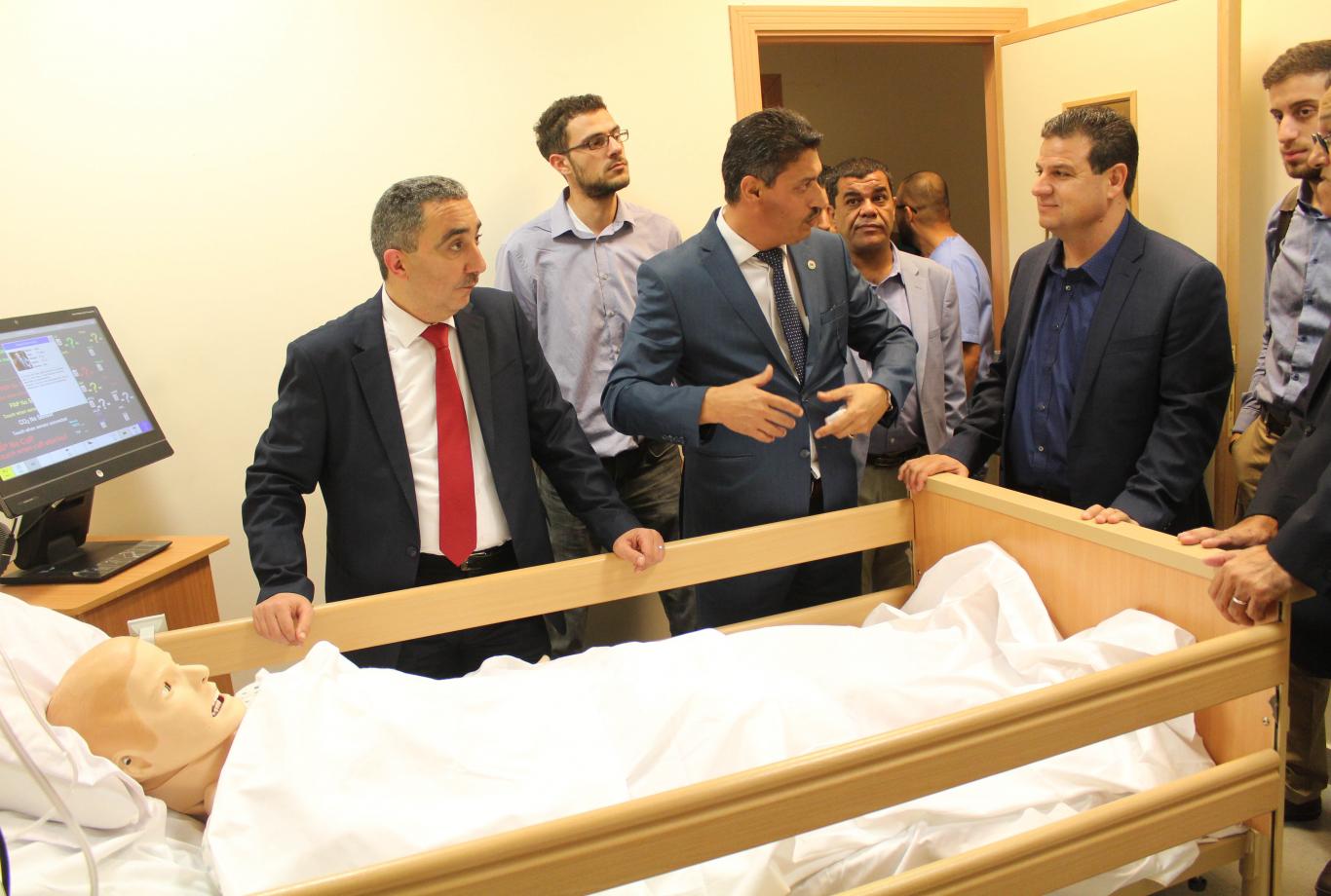 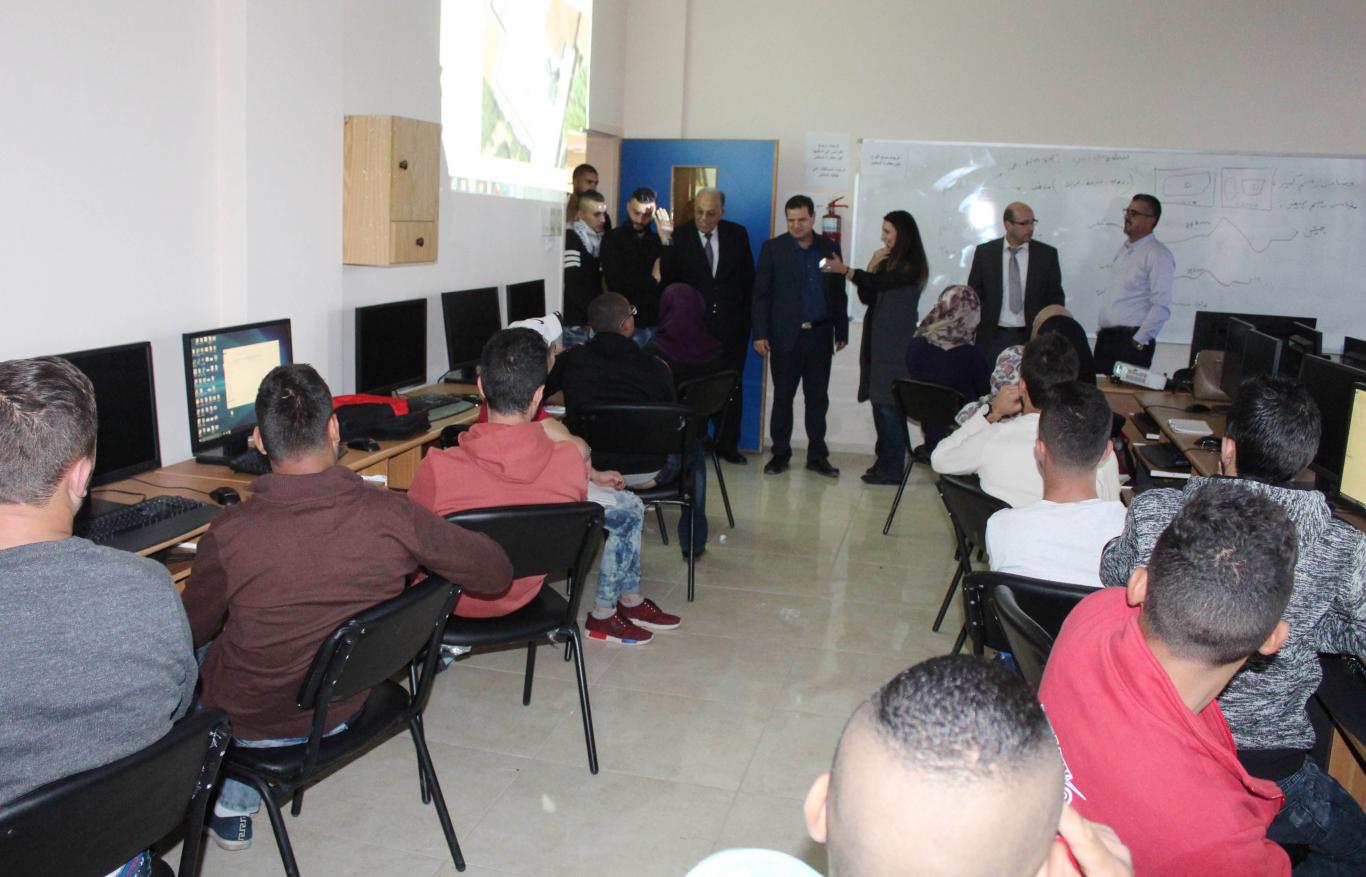