During the Official Opening of the Medical Center …. The Minister Awad Announces That the University Has Received Accreditation Of Two Dental Residency Programs in Oral & Maxillofacial Surgery and Prosthodontics

The Minister of Health Dr. Jawad Awad announced that Arab American University has received accreditation of two Dental Residency Programs in Oral & Maxillofacial Surgery and Prosthodontics, after its recognition by the Palestinian Medical Council. As he praised the efforts of the university, saying that this recognition is a pioneer in the academic development, especially in the disciplines and the medical fields. 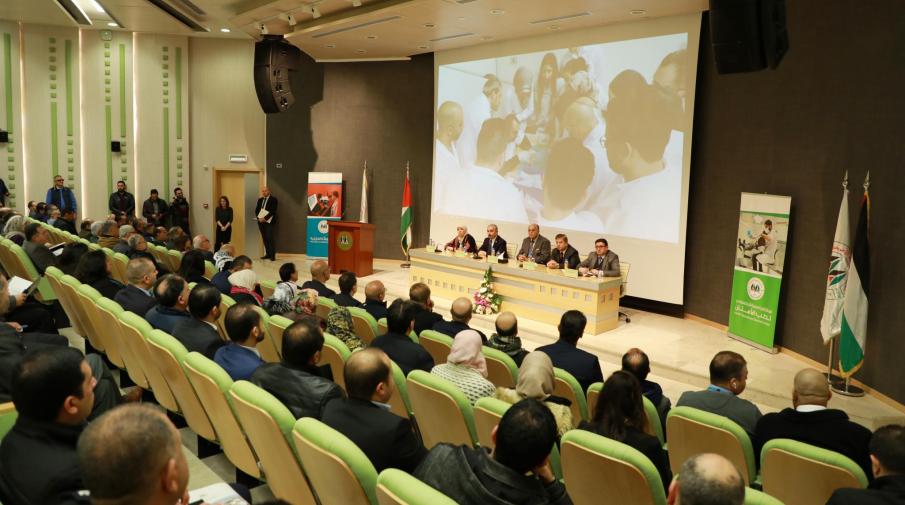 This special announced was during his speech at the opening ceremony of the Medical Center, that contains (the Dental Center, the Genetic Genetics Center and the Analysis Lab) at Arab American University - Ramallah campus in the presence of Chairman of the Board of Trustees of the University Dr. Mohamed Ashtia, Dr. Yousef Asfour Chairman of the Board of Directors, the Governor of Ramallah and Al-Bireh Dr. Laila Ghannam, President of the University Professor Ali Zidan Abu Zuhri, Assistant Undersecretary for Higher Education at the Ministry of Education Dr. Ihab Al Qubaj, Member of the Executive Committee of the Palestine Liberation Organization Saleh Rafat, and Members of the board of directors and secretaries of the university, directors and representatives of official and medical institutions, insurance companies, security sectors and a large number of national and scientific figures.

The President of the University Speech

The President of the University opened the ceremony after welcoming the guest by saying "Today we are celebrating the opening of the specialized medical center at Arab American University, which includes clinics and laboratories equipped with the best medical equipment with international standards, some of which are the first of its kind in Palestine and the region, which is a qualitative value to higher education, health sectors and health institutions”.

He added that the university searches for new specialties and programs needed by the local community, where the university campus in Ramallah contains 12 unique programs in graduate studies and soon will develop other disciplines after obtaining accreditations, as he assured that the graduate studies programs are qualitative and have a remarkable demand where about 750 students have enrolled in these programs.

Dr. Abu Zuhri declared that the university has partnerships with international and local educational institutions such as MBA program, Ph.D. in business with Indiana University in Pennsylvania, and public relation program with Al Najah University. He pointed out that the university is one of the most open universities to the local community for example, the sports facilities at the university campus in Jenin receive all the local clubs in the governorate of Jenin for training and playing games, in addition the Palestinian team Al-Fedaey has took the football stadium as it home, where they play more than 6 international games in Asian and Arab tournaments. Aslo the Faculty of Dentistry at the university campus in Jenin offers free treatment to school students and various segments of the community through its clinics.

He added “We are officially opened the dental center at the university campus in Ramallah, which will enable students to obtain a higher degree in a number of dental specialties, using the latest technology in dental clinics. He added that the university is planning to open a Center for genetic and genetic analysis, and work on providing services to medical institutions, and the Ministry of Health and hospitals.

Dr. Abu Zuhri said: "Arab American University is the first private university in Palestine and has a great influence in developing higher education systems. It is the first experience in investing in higher education sector. As a result of these unique achievements The President honors the National Economist Dr. Yousef Asfour “the chairman of Board of Directors” the Merit Star from the Medal of the Palestinian State.

The Chairman of the Board of Trustees speech

In his speech Dr. Ashtiyeh said “"Palestine, has the best medical performance  among the neighbor countries,  As a result the President Abu Mazen gave his directives to raise the share of health from the public budget to reach up to 11%. this sector is a humanitarian sector, and every citizen and his safety is a matter of the country where it always seeks ways to develop the health sector.

He added that this university, which is celebrating today the opening of its medical centers is a bridge in the Palestinian geography, where nearly half of its students are from the Palestinian 1948 territories, hoping that by the beginning of this study year students from Gaza Strip will be able to enroll in the university.

On the political side, he said: "Fatah is ready to hold the elections and respect the choice of the people, assuring the keenness of President Abu Mazen and the Palestinian leadership to hold elections and ending the prevailing internal division."

He added that President Abu Mazen asked the head of the Central Election Commission Hanna Nasser to go to Gaza Strip and start election consultations. He also said that Israel should respect the agreements signed regarding the elections, especially the city of Jerusalem, and allow the elections to be as in 1996 and 2006. Indicating that the efforts of the solution is by holding elections accompanied by the formation of a political government, including the factions of the Palestine Liberation Organization.

he confirmed that the upcoming elections will be elections for the parliament of the state of Palestine, which was recognized by 138 countries around the world, and the embodiment of this state through a combination of economic, political, legal and security joints.

He said: "We will break the reality through a comprehensive national unity, a gradual withdrawal from the economic dependence imposed by the occupation, and re-formulation of the relationship with the occupation legally, politically and security."

The Governor of Ramallah and Al-Bireh speech

the Governor of Ramallah and Al-Bireh, Dr. Laila Ghannam, conveyed the greetings of President Mahmoud Abbas Abu Mazen and said to the Chairman of the Board of Directors of Arab American University Dr. Yousef Asfour was honored by the Merit Star from the Medal of the Palestinian State for his recognition of his national role and economic contributions in the field of Higher education, she added that this honor is also an honor for Arab American University for success and excellence with a great will and management.

She added that she was proud of the health sector in Palestine, as she welcomed the the opening of a new Health Directorate in Ramallah and Al-Bireh with the support of the local private sector, providing world-class medical services.

The Deputy Assistant Undersecretary for Higher Education Dr. Ehab Al-Qabaj conveyed the greetings of the Minister of Education and Higher Education Dr. Sabri Sidem, and the Ministry's family congratulating the University for opening its medical center. This is an important message, despite the vicious attack by the occupation, we are proud of the existence of institutions capable of building, developing and coping with science in all academic aspects.

He assured that Arab American University consistently proves that in the research and academic studies there is continuous integration and in this integration the results are positive, adding that this center, which includes laboratories will be a qualitative value to higher education.

The Minister of Health speech

The Minister of Health Dr. Jawad Awad assured that the Ministry of Health aims to support and institutionalize the planning process in the health sector, including the levels of planning in the health facilities. He added that the medical and health services provided at the ministry facilities have witnessed significant development in recent years as a result of well reform policies, hard work and perseverance for the better and the creativity, excellence and giving of the competencies and national staff.

He pointed out that the results of the development in the medical and health field were distinct especially in Care of pregnant mothers, vaccinations, disease prevention programs, anti-drug and smoking programs, food control programs and environmental health, which reflected positively on the health standards in Palestine, which is the best in the region through the testimony and reports of the World Health Organization.

He added that the Ministry of Health plan is providing services to Palestine through the identification of needs and guidance of future expansion of medical centers, clinics and hospitals and attract competencies and training staff taking in consideration the population growth and geographical distribution and medical and scientific development.

He ended his speech by saying “"The achievements of the Ministry of Health in the field of medical and health were supported by President Mahmoud Abbas Abu Mazen, and the Prime Minister Dr. Rami Al-Hamdallah. In addition to the recognitions of international institutions and health organizations of the Palestinian Health Sector, as a result the World Bank has returned to support and provide projects with the ministry after being held back for many years in addition to many international institutions. Due to our policy of strict transparency, accountability, control and the raise of quality services in addition to building bridges of mutual cooperation and exchange of experiences.”

At the end of the ceremony, the Minister of Health and the attendees took a tour at the dental center, the Genetic Genetics Center and the Analysis Laboratory. 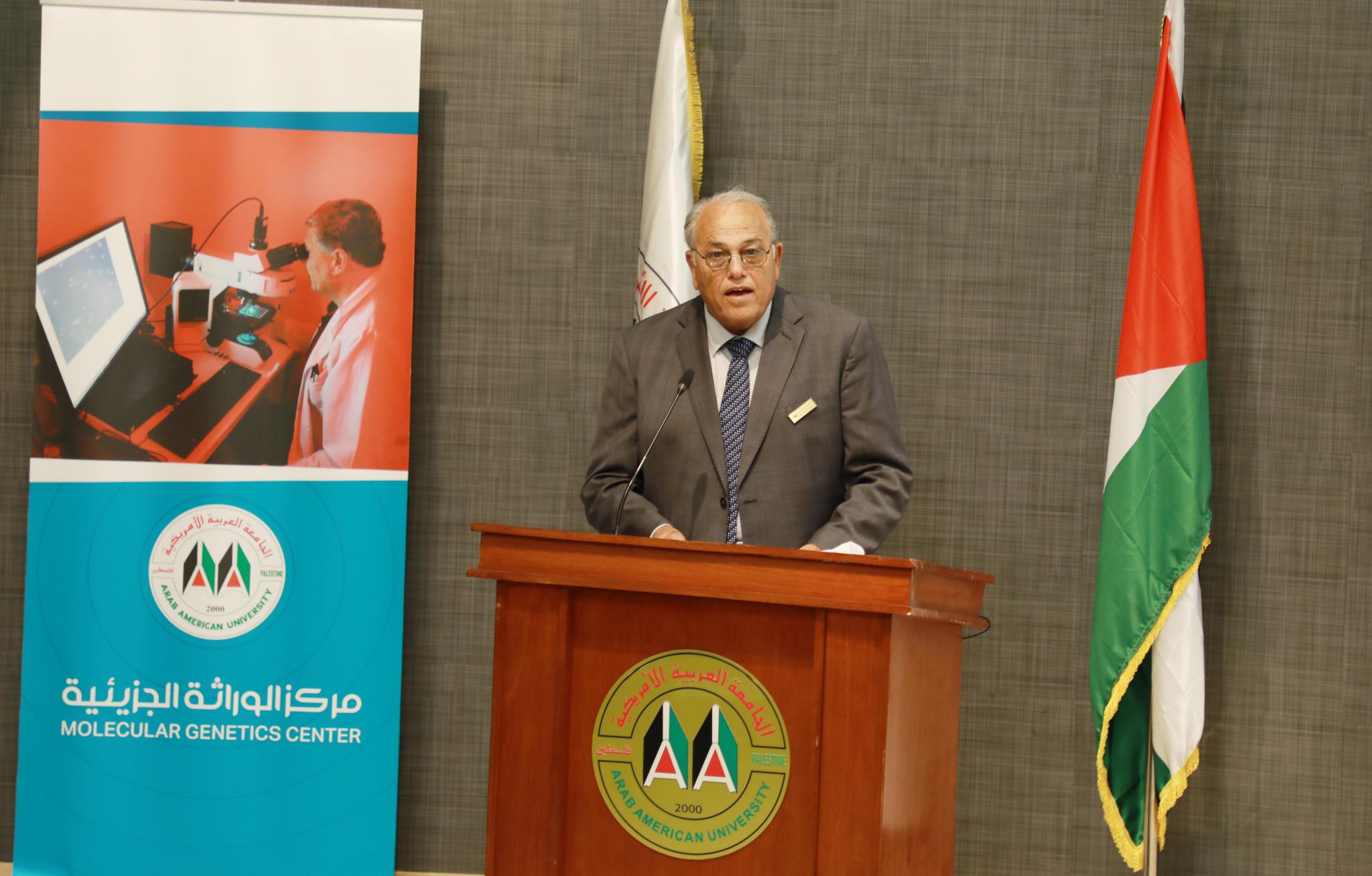 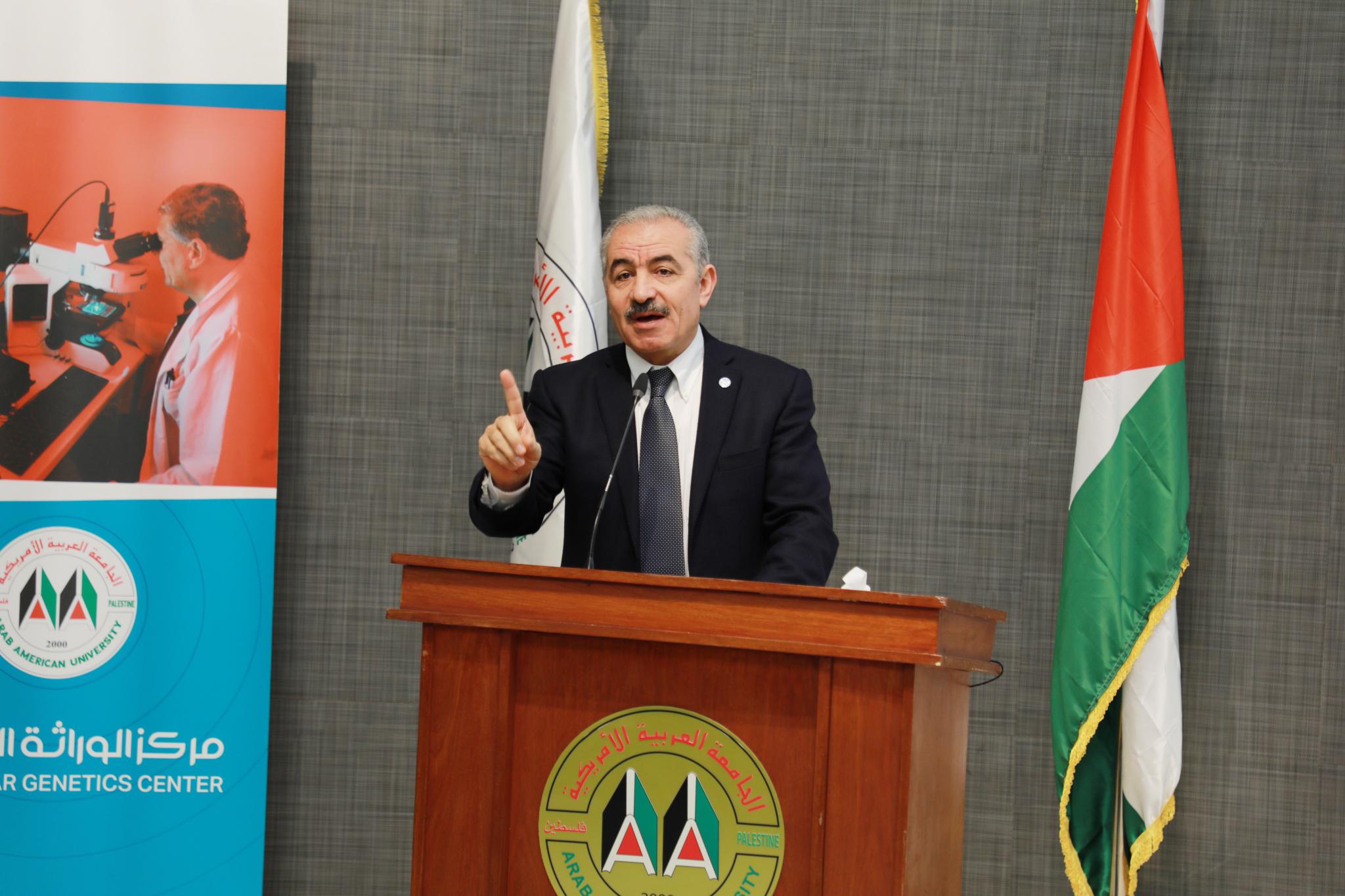 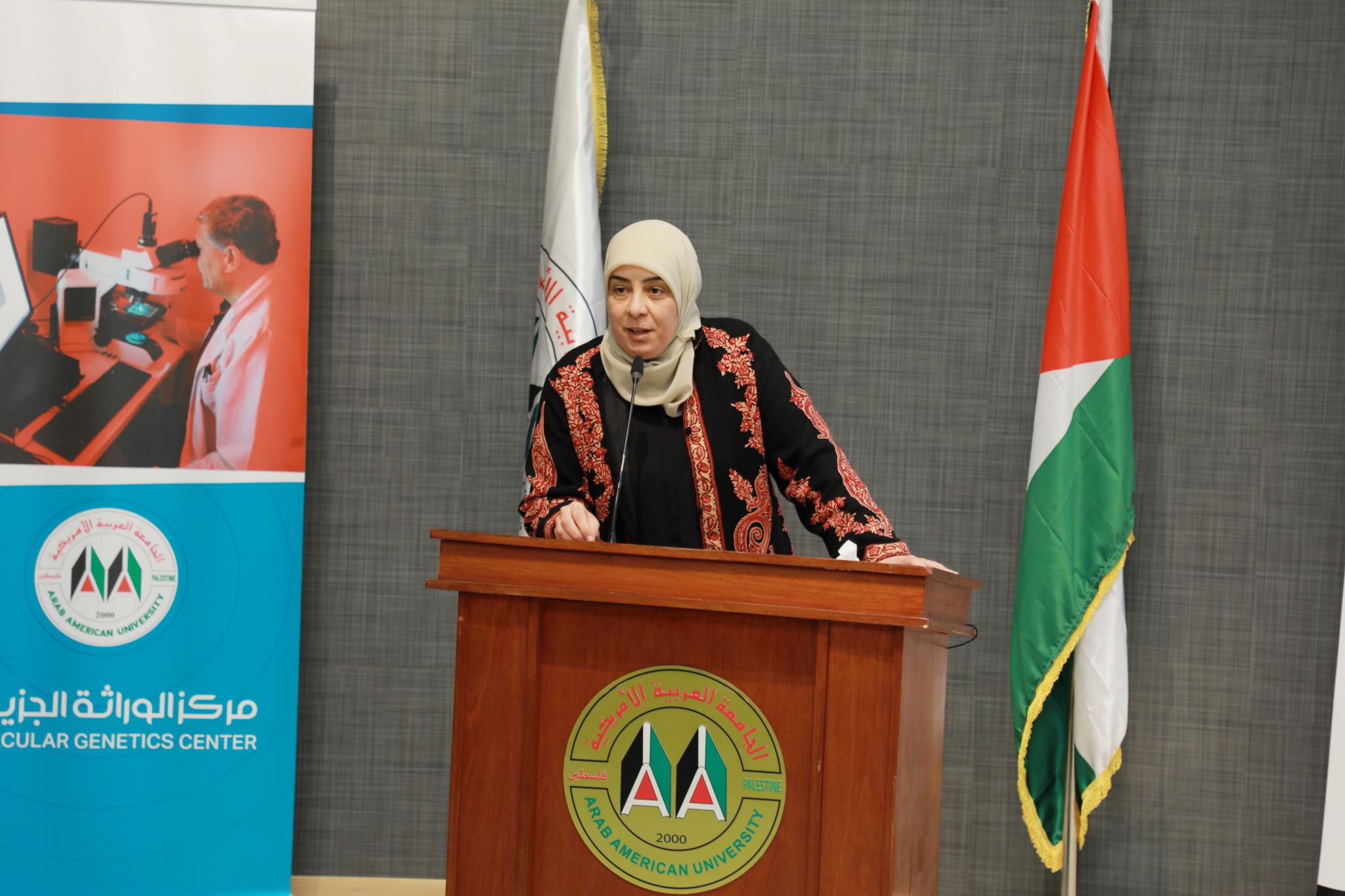 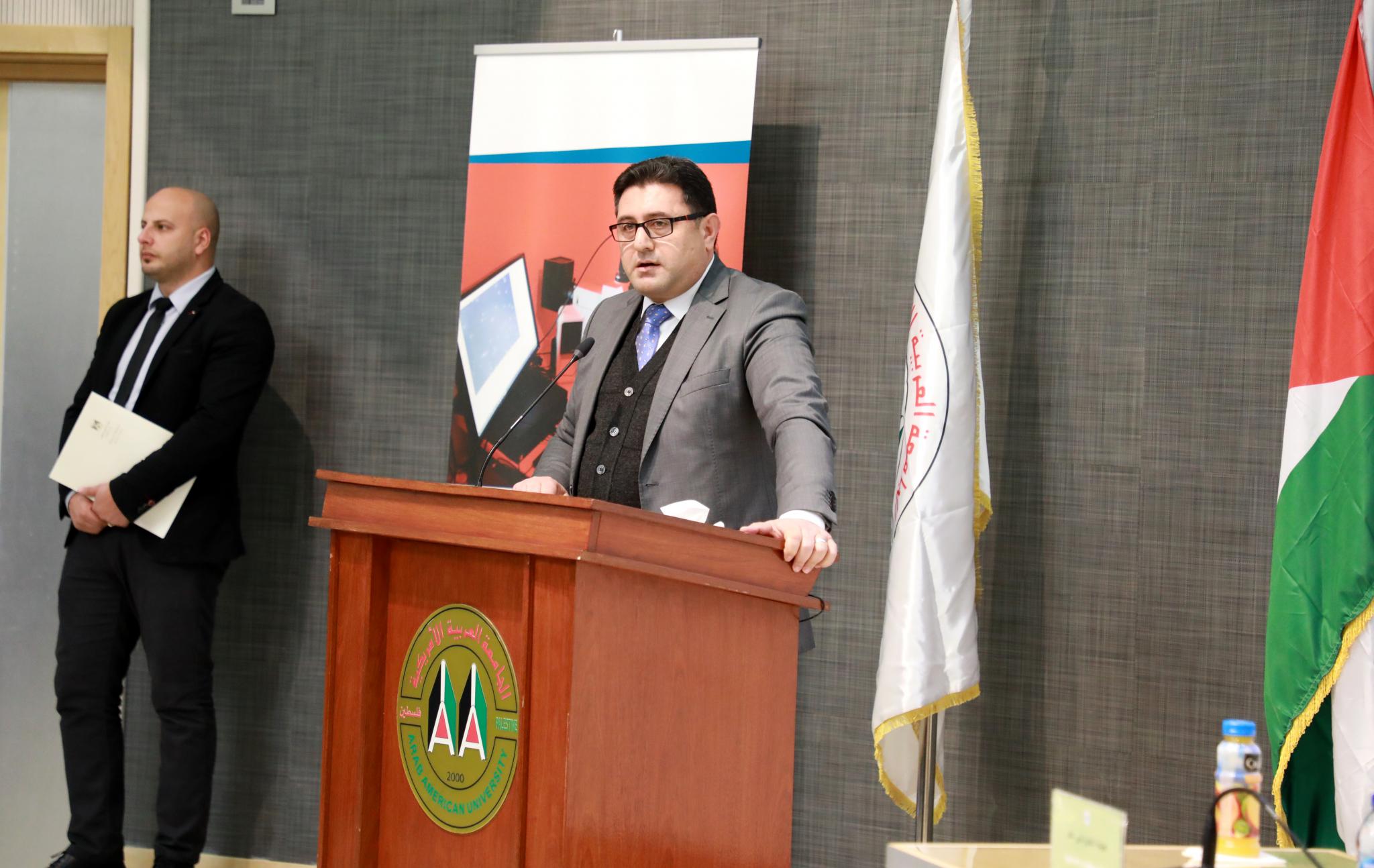 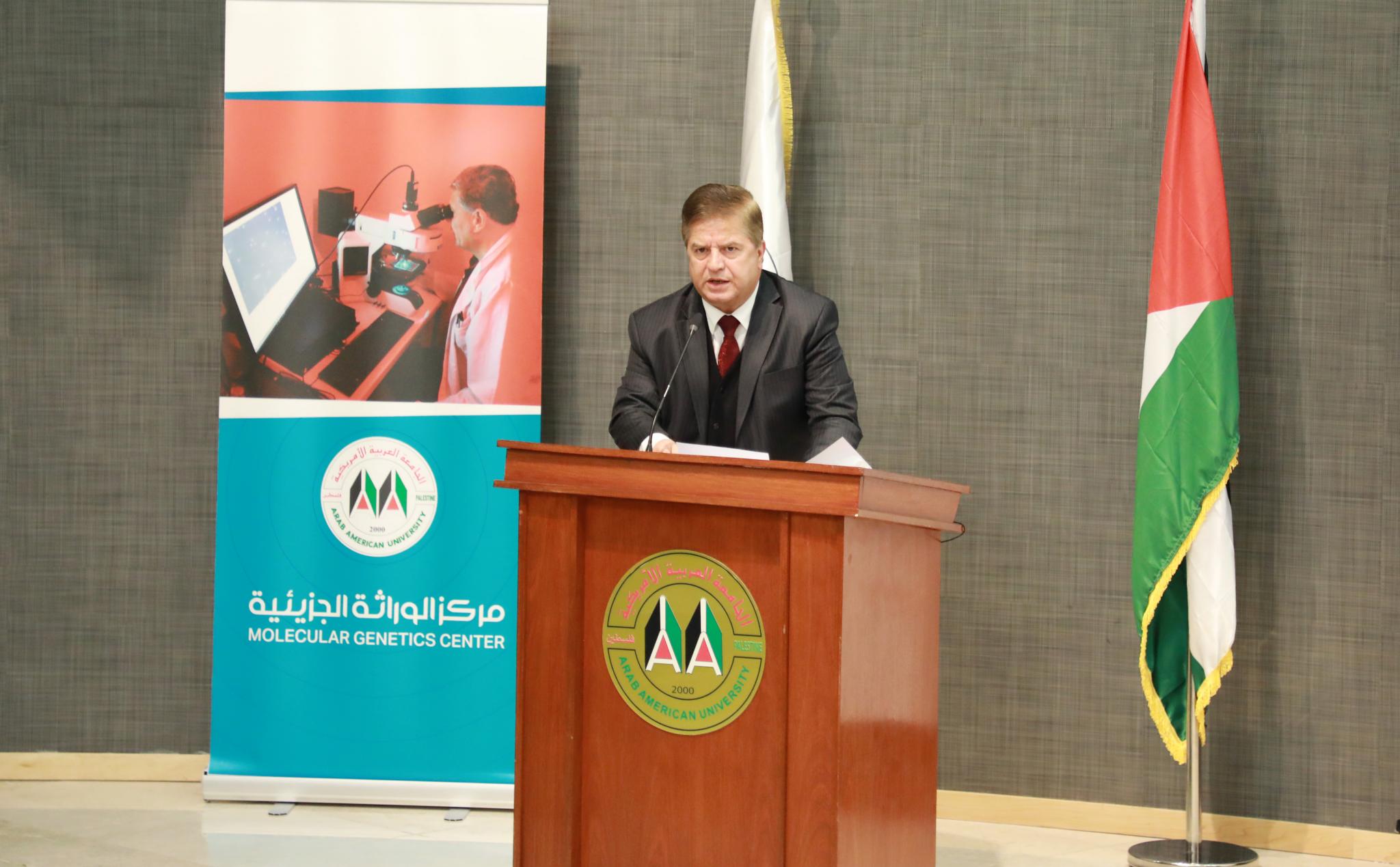 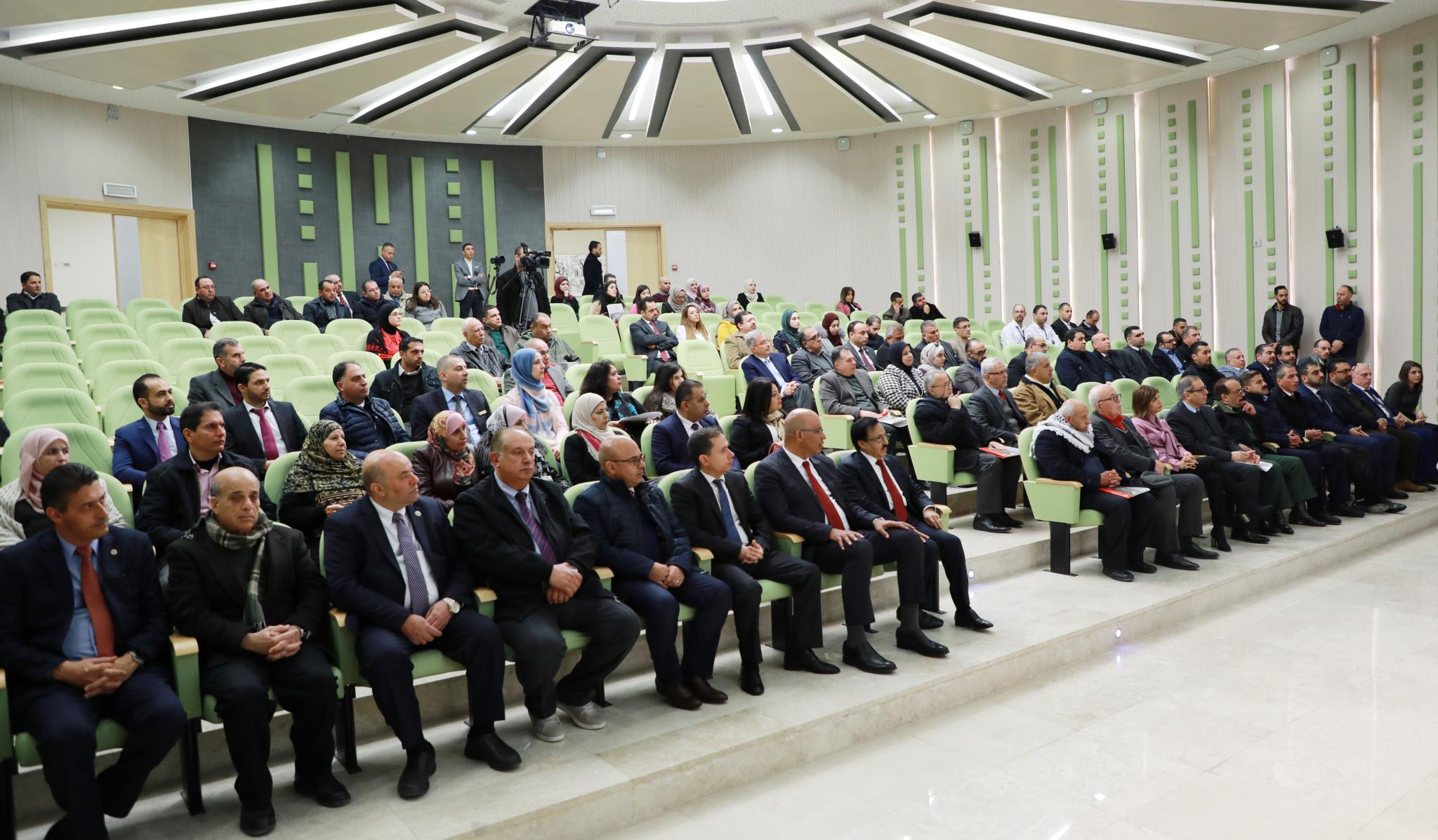 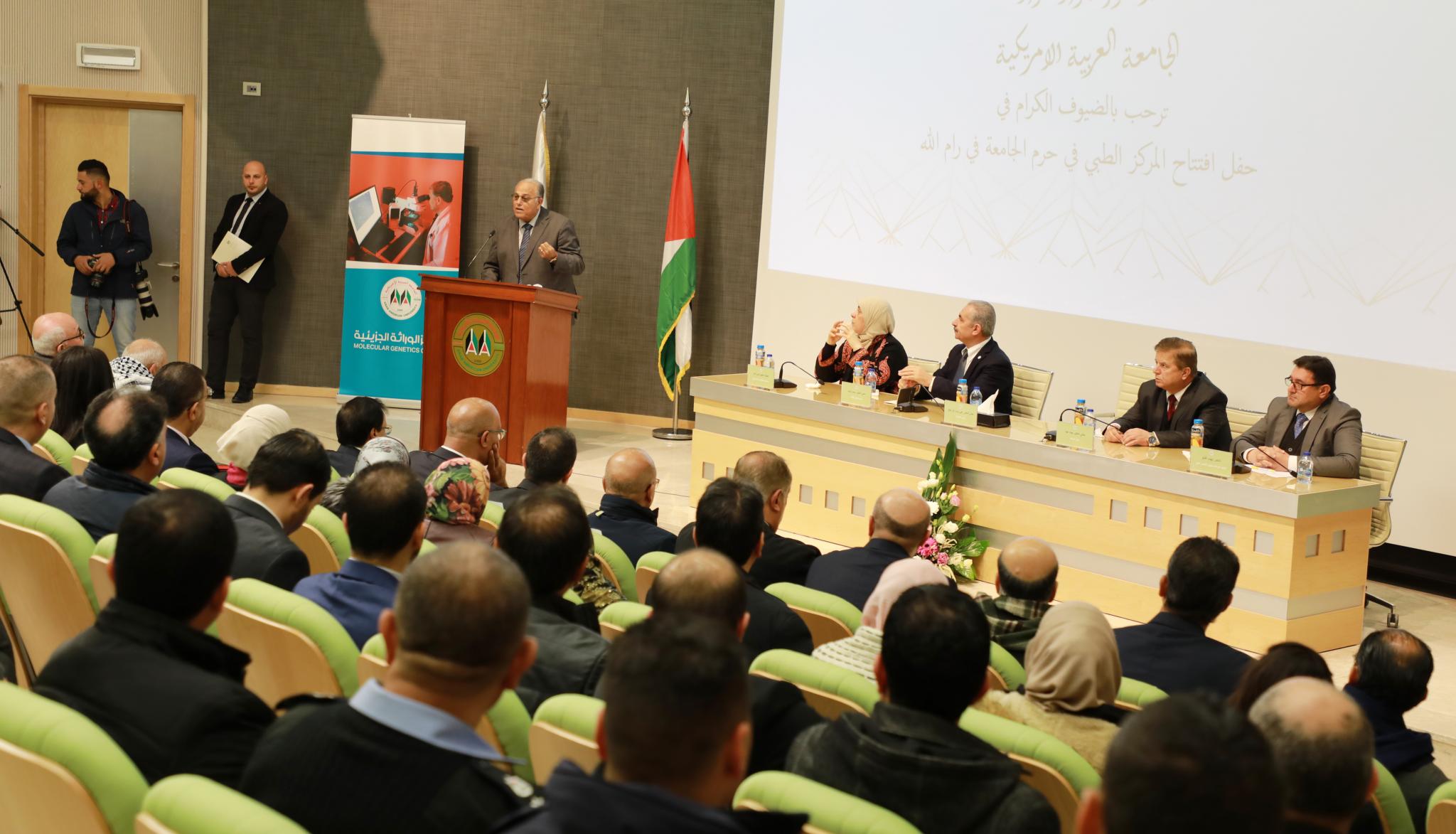 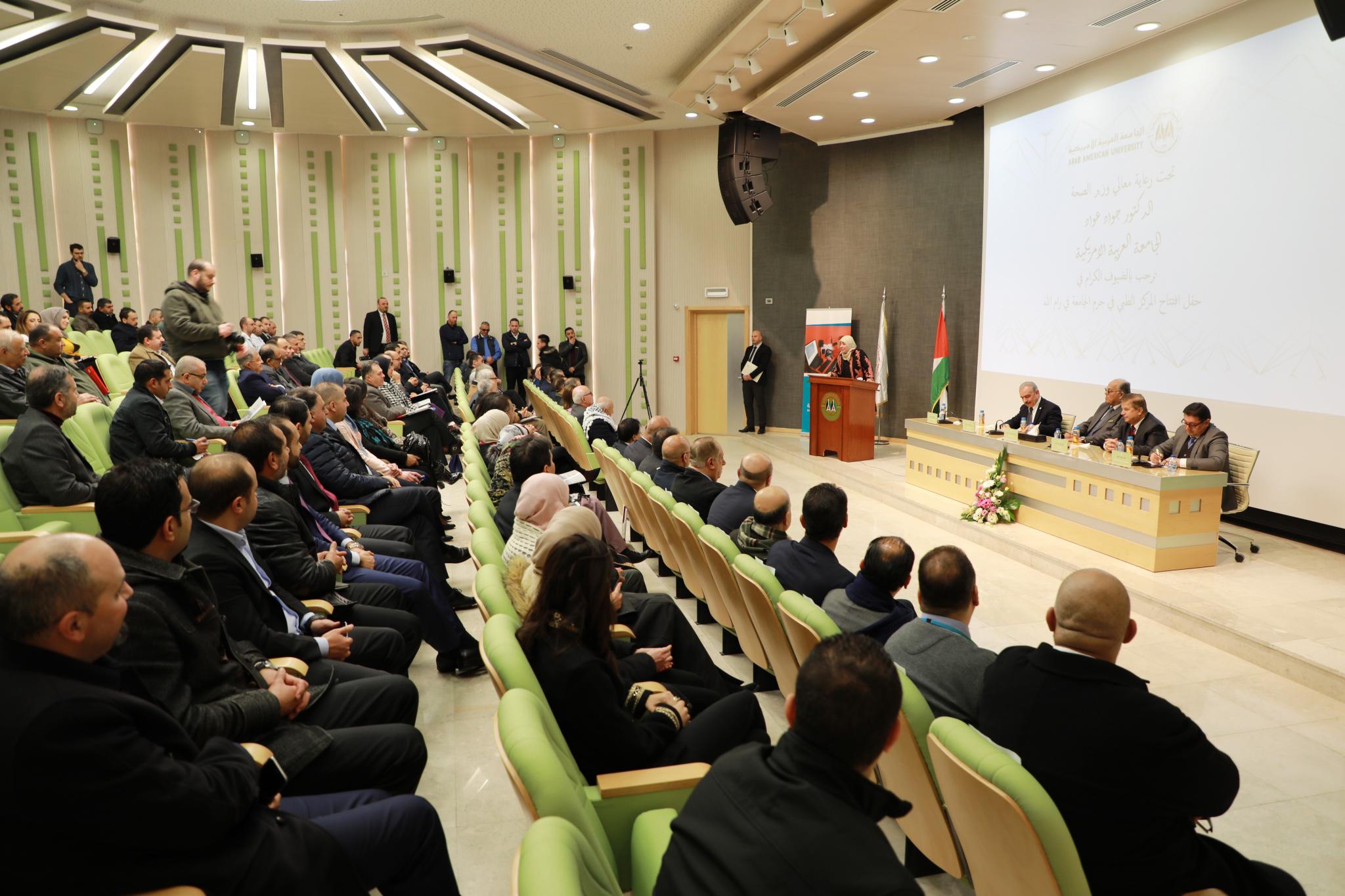 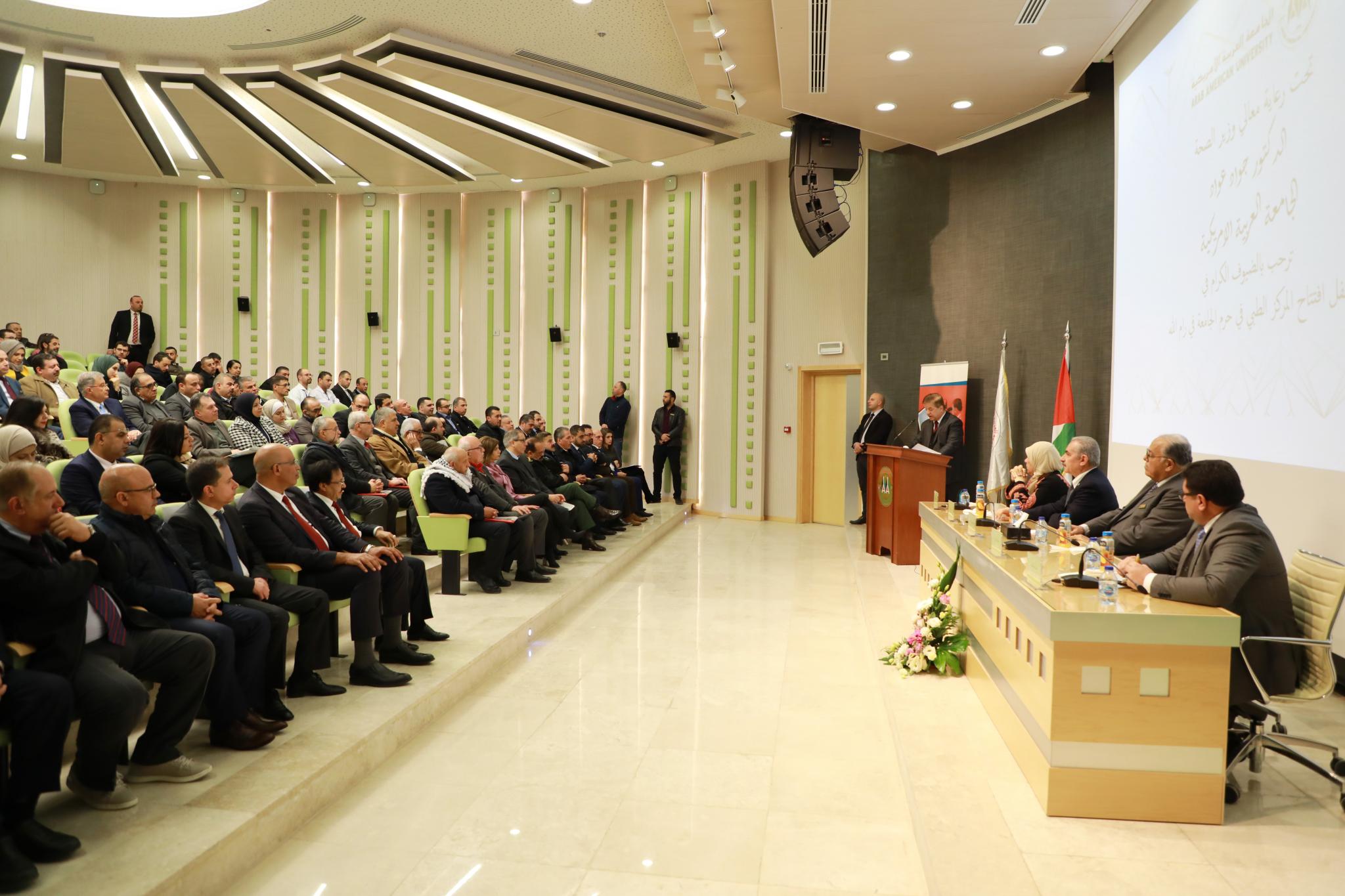 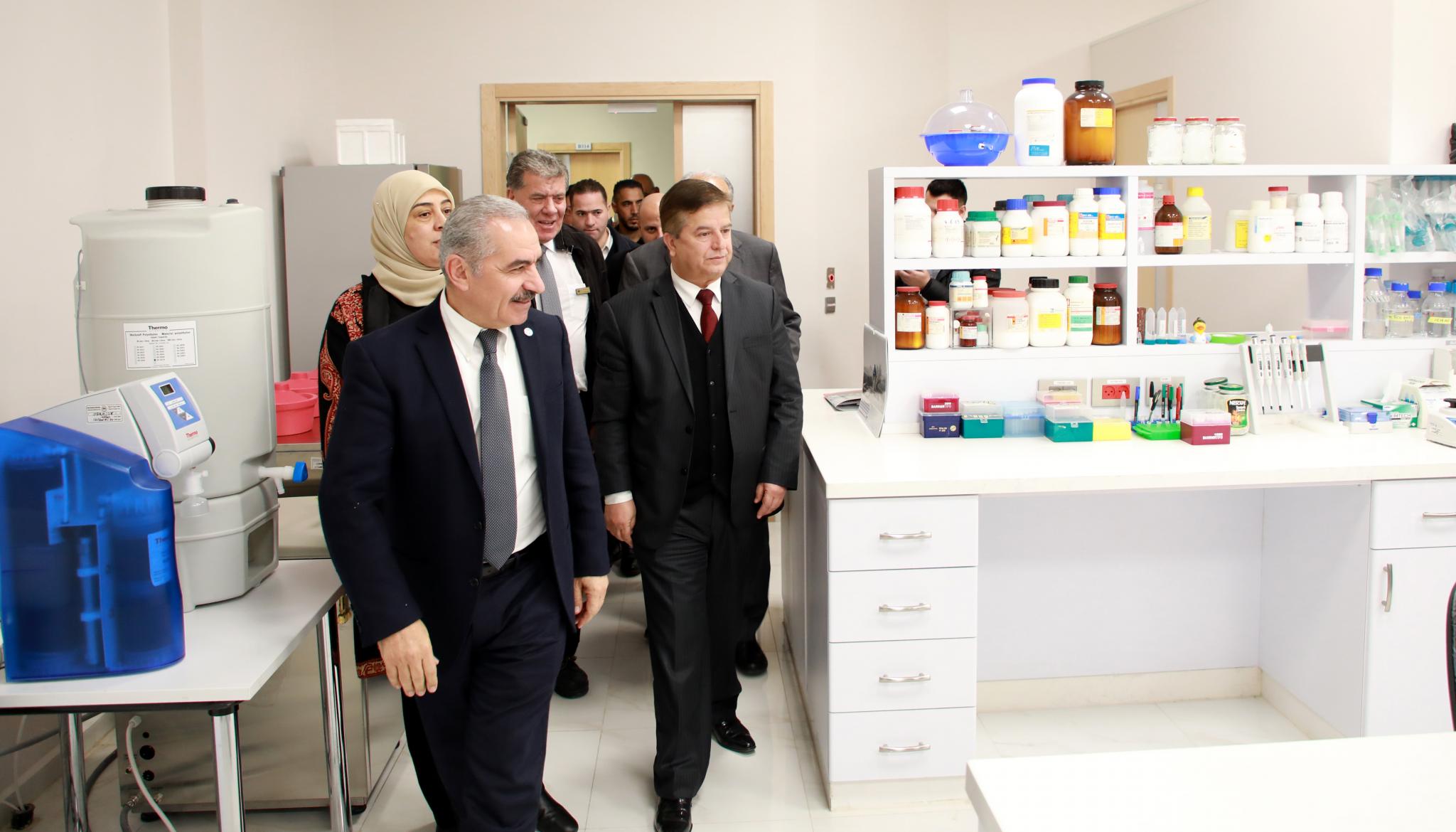 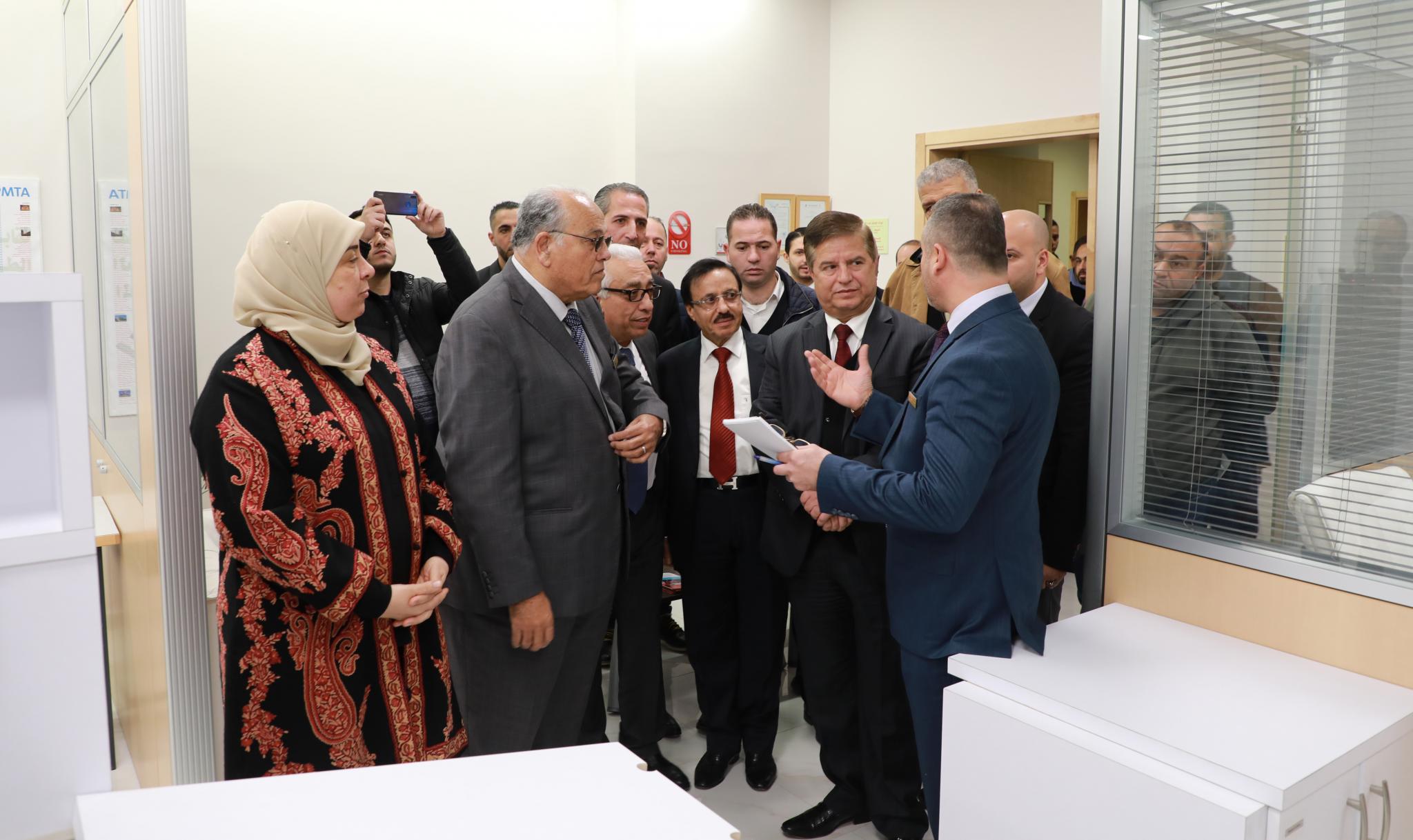 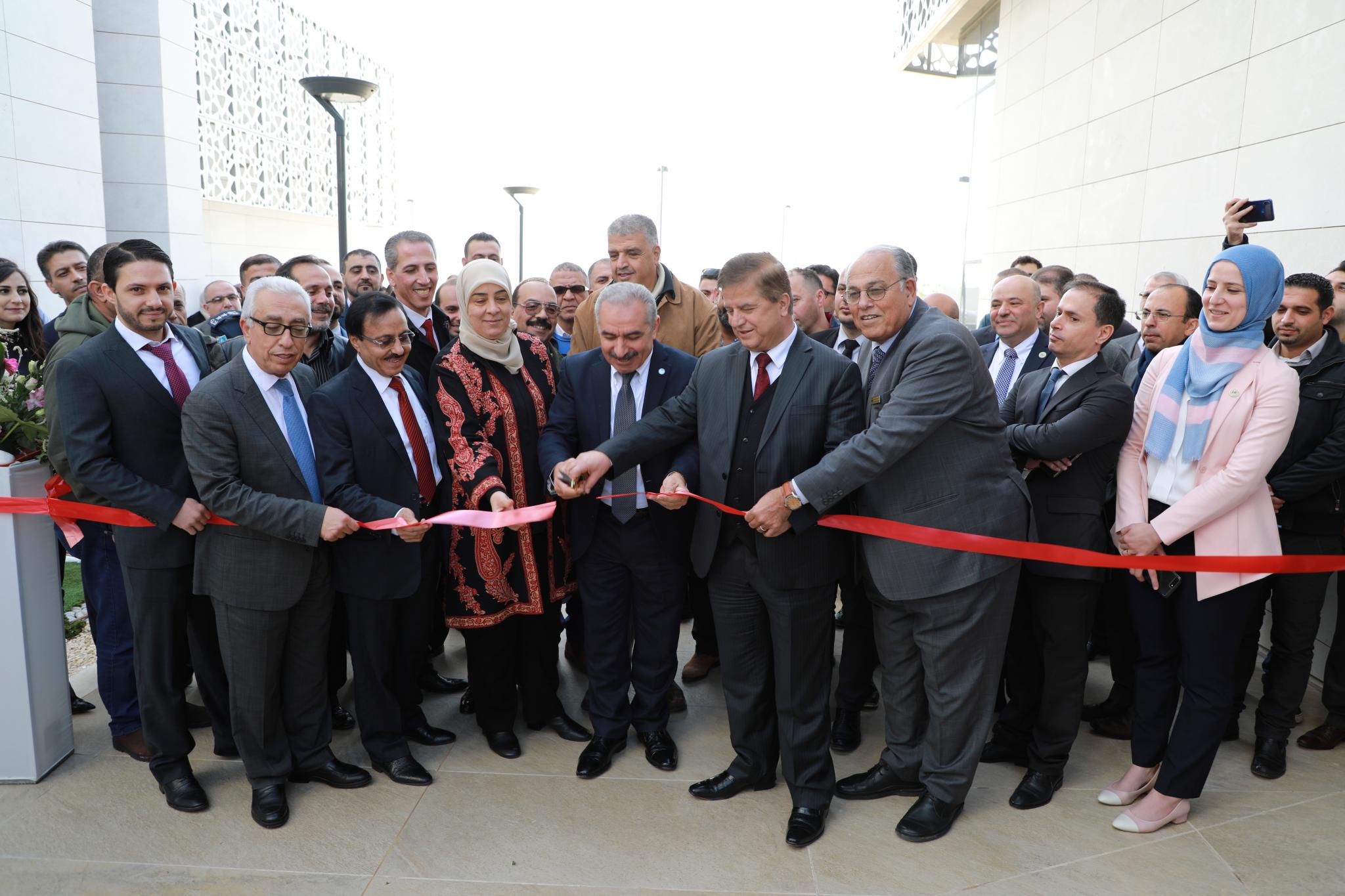 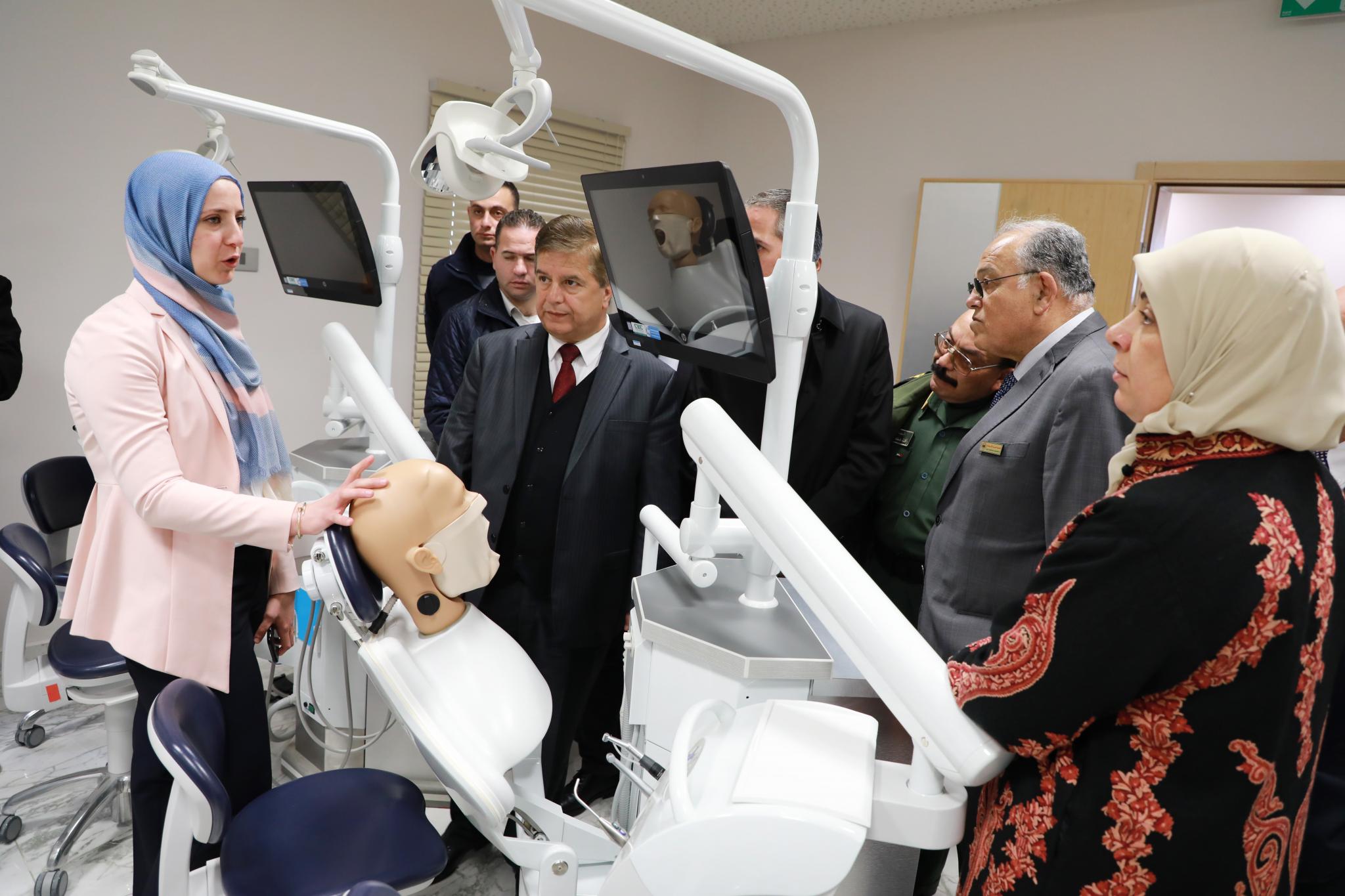