The Faculty of Modern Media in Arab American University hosted two Palestinian media experts to talk about the reality of Arab Media in 2020 in the monthly dialogue mediology entitled “Dialogues Mediology”. 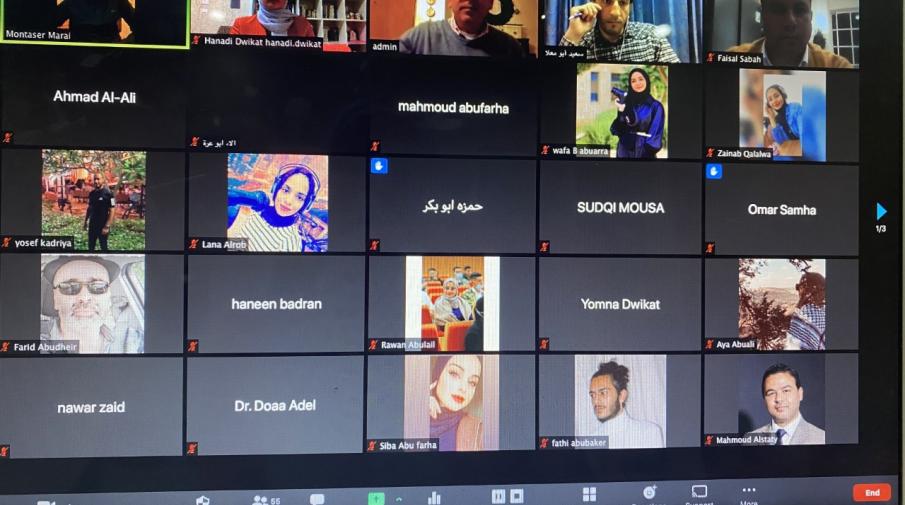 The second seminar of “Dialogue Mediology” through Zoom

The experts presented their critical evaluation of the Arab media status during the last year in the seminar that was entitled “Panorama of Arab Media in 2020.. Under Spot Light! “"What did it cover? What was marginalized? And in what way?”

Dr. Hanady Dwaikat – the Dean of the Faculty of Modern Media welcomed the participants and the guests, and ensured that the monthly virtual seminar are part of continuing providing services to students and the community as well, and part of contributing in enriching the discussion and dialogue in the media and social media topics. These activities focus on the media field, its institutions and the content and impact of it.

Mr. Said Abu Malla- the seminar coordinator and the Press course Professor in the Faculty of Modern Media opened the meeting by describing the last year _with all its related events of the pandemic, people fears and the global humanitarian worries_ as an exceptional year by all means.

He explained that trying to read “the last year through media” is very broad and hard to be covered.. but this seminar will try to fulfill the knowledge, education and learned lessons to get some of the time back.. a time that is escaping with all its disastrous and difficulties but a very important and essential time to the media field that is facing many challenges.. and changes.

From Ramallah, Mr. Saleh Masharqa- the Media Expert and Researcher and the Manager of the Policy and Research Unit in the Media Development Center in Birzeit University started by presenting 3 main scenes that summarize the Palestinian Media Status in 2020.

Mr. Masharqa said: “the first scene was like a change in the Palestinian and Arab Media from being the media of Arab Spring revolutions to being the media of panic and fear consistent with the ruling authority and its policies. One result was that the media has surrendered to governments during COVID-19 pandemic in a good way.”

He continued: “We need to know why the panic media infected the media persons and caused them to be silenced, which in turn led to media losing its revolutionary identity that was gained from the Arab Spring revolutions?”

The second topic summarized the emergence of the post-truth press, which was a change that appeared in the Palestinian media in 2020 through the many political and community –related files, as information started to be missing in oppose to the passion and populism. Some of the activities and cases that were covered like the “Talaat Movement”, “the Controversy over CEDAW”, “Family Protection Law” and lastly “the Site of Prophet Moses” event in Jericho.

Mr. Masharqa ensured that the media performance in the previously mentioned files was negative, over-reacting and paralyzed from doing the job in a professional way.

About the third topic, Mr. Masharqa explained the growing phenomenon of influencers who are completely out of control as now they are media speakers with worst characteristics of the official governmental speakers. Many of those influencers forgot how to deliver a message on behalf of the community and started talking on behalf of families and political parties.

Finally, Masharqa encouraged participants to start working on some cases as part of skipping all the changes in the Palestinian media such as: reconsidering the issue of information flow from its sources, in order to ensure the professional journalistic work that can shape citizens’ opinion and knowledge, focusing on working on the media education file, creating a digital identity and giving more attention on the digital rights of the Arab users.

From Doha the media expert Mr. Muntaser Maree- the Head of the Initiatives Department in Al Jazeera Media Institute, focused on the Arab media through some of the scenes that he connected to what Mr. Masharqa presented.

Mr. Maree considered the main event that the Arab press faced during this year was that many professional journalist colleagues losing their jobs in the media field due to the economic situation that the institutions had gone through. He added that the performance of many newspapers, channels and digital platforms is declining, some of which have closed and some will be closed later. He also indicated that this happened in Qatar, Lebanon, Jordan and Morocco and that the reason is that the media institutions did not succeed in creating a financial independent body due to the ease of support from the governments or from businessmen.

Mr. Maree continued: “Some institutions are trying to copy the global experiments by selling their content through peoples’ participation, but the reality of the Arab press and the economic situation of the Arab citizens will not make this model a good one to overcome this media crisis.”

Talking about the “Political Polarization”, Mr. Maree said that this is the Arab media characteristic, as the media practices politics more through the many opinion articles and this affects the Arab citizens on the first place who read the political articles more than reading information articles.

On the other hand, Mr. Maree explained the digital Arab media and how it became the space for people and community, as the political regimes participated in these platforms through being available directly or by buying pages or influencers. But he expects a new change will happen to the social and entertainment platforms such as the “tiktok” that started to work on political change like what happened during the “Black Lives Matter” movement.

And about the forth scene, Mr. Maree ensured that 2020 has witnessed a growing phenomenon in the fake news and rumors especially that the journalists who work in great media institutions used to share as well. Many of the media people started seeking excitement before making sure of what they share, and so the public has become vulnerable to rumors and myths, especially in the absence of reliable information.

Mr. Maree concluded: this was enhanced when the newsrooms discovered that they were lacking scientific experts, as they did not have scientific journalists specialized to be able to link between the medical scientific community and the citizens, which reinforced the spread of rumors.

The meeting was attended by tens of journalists, academics, media students and other people interested in the topic, and a fruitful discussion was raised among attendees and the guests of the meeting. The “Dialogue Mediology” is a monthly seminar that the Faculty of Modern Media in Arab American University has started through Zoom (during the pandemic) and is broadcasted live on the University Radio 97.1 FM and the official page of AAUP on Facebook.