Skip to main content
♫ ♩
♩
♯ ♪
♪
FM
Home NEWS Recommendations to Create an Observatory for the Digital Election Campaign, and AAUP Discusses “What Do the Social Media Networks Hide to the Palestinian Elections?”

Recommendations to Create an Observatory for the Digital Election Campaign, and AAUP Discusses “What Do the Social Media Networks Hide to the Palestinian Elections?”

In the fourth seminar of “Dialogues Mediolgy” that was organized by the Faculty of Modern Media in Arab American University, experts and specialists recommended the necessity of establishing an observatory specialized to observe and supervise the digital election campaign. 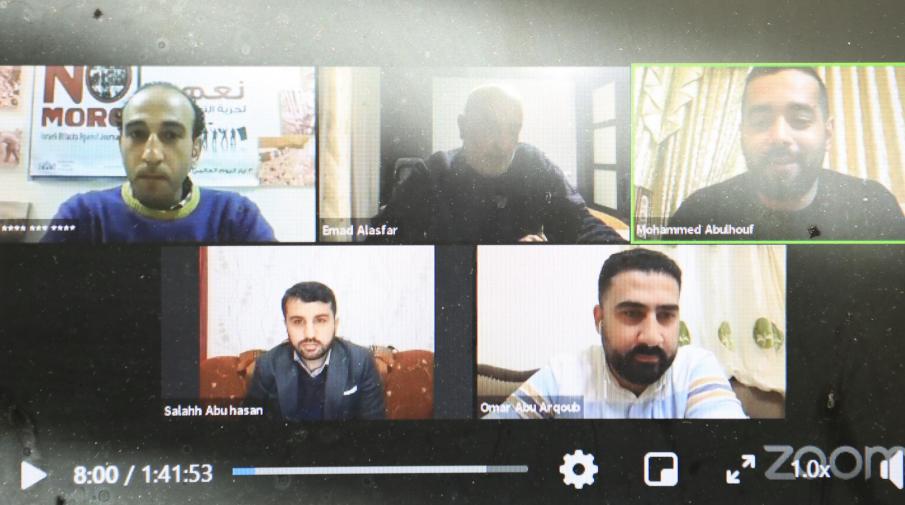 The seminar that was via zoom and broadcasted on AAUP Facebook page was entitled: “What do social media networks hide for the Palestinian elections?” and discussion was raised between Mr. Mohammad Abu Al-Houf- the Digital Marketing Trainer and Adviser, Mr. Salah Abu Hasan- Lecturer in Media and the Program Manager in Elm Radio in Hebron University, Mr. Iamd Al Asfar- form the Media Development Center, Dr. Omar Abu Arqoub- from Arab American University and Mr. Sulaiman Bsharat- Manager of Yabous Center for Studies and Consulting.

The meeting was moderated by Mr. Saeed Abu Mualla- the Digital Media Professor in AAUP who started the meeting by welcoming the experts and guests, and emphasized on the great role of the social media networks on elections locally and globally.

He continued: “Facebook and other social media networks have received lots of criticisms, as different official bodies, candidates and their financiers are using these platforms in a wrong way. He also explained that there are some external parties that have specific interests in impacting the results of election.”

Abu Mualla added: “the list of topics that are connected to the networks and to the elections are many, including: misleading news, black propaganda, digital repression, the emergence of electronic committees phenomenon, electronic bullying, the increasing of penetration, mobilization operations, and foreign interventions, in addition to the growth of hate speech .. all these are happening in the digital world. And so, the reading and studying of the elections circumstances digitally and electronically has become a must since it impacts the election process.”

Abu Al-Houf: The Platforms Direct our way of Thinking!

Mr. Mohammad Abu Al-Houf- the expert and trainer in digital marketing started his talk by considering that the treasure of Facebook is the data in it, which is the data of people who are connected to Facebook and have accounts on Facebook, Instagram and other applications. These data provide information about the interests and feelings of users and those data are important for the elections.

He added: “For instance, such shocking information is that Facebook collects around 5000 types of data that are collected to analyze the person through his/her behavior and interests along with other details too. Data are being studied to know the interest of the person and the content he/ she prefers, and then people will be directed by groups like promoting negative feelings in the society.”

He added that the new challenge is connected to the topic of “Thoughts Directing” as thoughts will be directed in a dangerous way. For example if someone thinks of another person, the picture of that person or a post by him will appear in less than 2 minutes, and this is not a coincidence, thoughts directing happens according to some way of thinking or acting and this is why such platforms can be dangerous as this can be used in elections as well.

Abu Al-Houf also talked about the misleading news and its impact on people especially elderly people, as they have their own convictions from the inaccurate news and unreliable sources, and this can happen in elections.

Abu Al Hasan: Be Aware of the Hate Talks

Mr. Salah Abu Al Hasan- a Lecturer in Media and Manager of Elm Radio in Hebron University talked about the main features of the social media networks including the low costs compared to the traditional means. Also during the COVID-19 pandemic social media became the best way to prevent the gathering of huge number of people. Social media provides indicators for winning or losing and provides a good level of freedom to express oneself as it is a platform for elections to escape from government, and it is a more effective way in carrying out campaigns.

He continued that the digital platform will play a big role since they are supervising elections. Election observation groups can be active in working in gathering and publishing information about electoral mistakes and rapid vote counting processes. Abu Al Hasan added: “social media are used to correct the behavior of candidates and improve the interaction between candidates and voters. Platforms also provide the traditional press the preference in producing investigations about the electoral process thanks to the information, data and testimonies provided by these platforms.”

Abu Al Hasan went on saying that social platforms can do the before and after supervision, as they can supervise the elections and winners of the election and can also predict the results. It can also have an effect on the percentage of people participating as it educates people about elections.

Moreover, Abu Al Hasan talked about the dangerousness of social platforms during elections period as social media can be a place for hatred, and this will be enhanced in Palestine especially under the political division. He warned from the electronic flies’ phenomenon and the phenomenon of buying likes to create fake support (the majority impact), and the increasing of fake polls that cannot be checked.

Mr. Imad Al Asfar started his speech talking about the reality of elections and the social media networks, and focused on the question of the solutions in light of the fact that there are many concerns about the misuse of networks, which will lead to civil conflicts between the candidates. And concerning the solutions, Al Asfar suggested that it is very important to have honor charters between electoral parties, to follow up the rumor resources in order to put them under accountability and to keep up spreading the correct news with clarity and transparency because late news will open the door for rumors.

Al Asfar also suggested that each list should announce its official website and to be committed to only one website, and that other websites under the same name should be blocked. He recommended that many observatories should be established to check the accuracy and credibility of the published news and to contribute in republishing the content. Observatories must also use the different means, mechanisms and applications to check the credibility of news, photos, videos and accounts.

Al Asfar continued that if what he suggested was applied efficiently, this will lead to stop or at least reduce the rumors, the incorrect news and the misleading news. Rumors can be spread from fake accounts and can be also spread from our enemies or from abroad. Rumors can also spread via Whatsapp groups not only Facebook and Twitter and this makes it harder to control, but receivers of such misleading information must be smart and should ask about what they heard and not believe everything they receive.

Abu Arqoub: Platforms can be a Positive Factor

He added that social media’s main task was to break the barrier of the gate guard, thus will make the election process easier and faster as electors follow candidates online and contact them using text messages or via Zoom or to look them up on Twitter and see the elements and terminology that the candidate uses. This in turn reduced the gap and distance between individuals and candidates.

He added that the importance of social media is about targeting youth who are the engine to the elections process. Abu Arqoub also said that the idea of Clubhouse application made political people take an advantage from this application to discuss election issues.

At the end of his speech, Abu Arqoub suggested to have a department in the Central Elections Committee about political and the digital propaganda.

Bsharat: Lack of Confidence in Platforms

Researcher Suliman Bsharat – the Manager of Yabous Center for Studies and Consulting said that what distinguish this election is that it came after 15 years of absence, and it came under the great spread of the social media in our lives. Moreover, he considered that this experience should be an important field for new researchers in the modern media.

Bsharat also mentioned that the division of parties and the following behaviors and competition between parties leave a huge impact on social media network, since the Palestinian people are all framed to a specific party.

At the end, Bsharat concluded that the weakness and shortage of trust in the political partied, and also the absence of trust in the new democratic experience, especially because people had a bad experience in their heads, so the important question now is: who would guarantee and grant youth the trust to use the platforms to express their political opinion without any condition or fear?