The University hosted a meeting with the General Association of Palestinian Books & Writers to activate the association to be a forum that embraces and supports innovators.

The meeting was attended by about 150 Palestinian writers and books from the West Bank, Jerusalem and the Palestinian Territories in Israel, representatives of governmental and private institutions, private sector that are interested in cultural affairs, members of the academic and administrative staff of the university, where the same activity from the association was done in Gaza Strip. 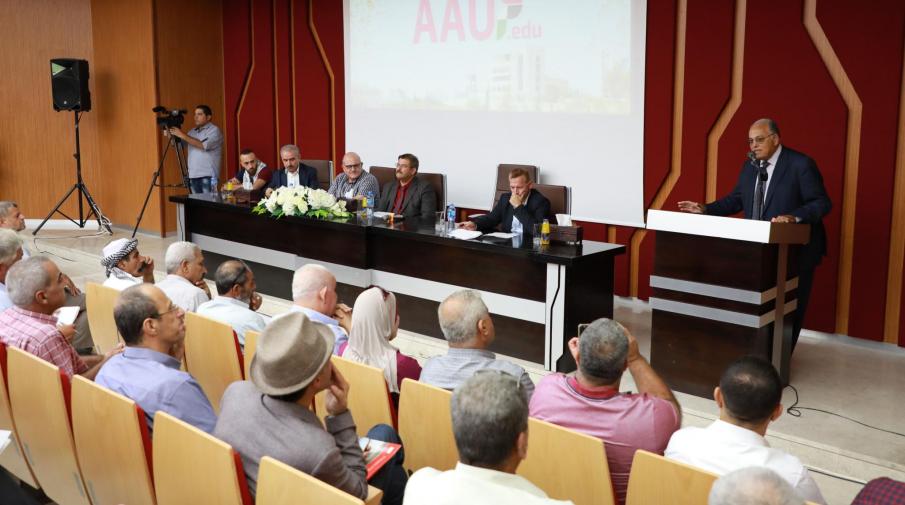 Part of the Meeting

The President of the Board of Trustees of the University, Dr. Mohamed Ashteh, announced about a literary project involving writers, poets and Palestinian intellectuals by writing literary letters published in one book that revives the art of writing, which has disappeared with the appearance of modern methods of communication.

As he explained more about the project, which was applied at schools in 2003 in a book entitled "Letters without Borders". He also mentioned the experience of Ministry of Culture in France with a similar project that brought together an important number of French writers.

He added that he expects to publish a book that includes high quality of literature writings that will chronicle this stage and reflect the thoughts and feelings of the Palestinians who are living this difficult reality imposed by the occupation and its consequences.

The writer and journalist Aref Hijjawi presented the mechanism of writing letters, and the conditions to participate in this initiative, since he is the supervisor of the book editorial committee.