The President of Arab American University Prof. Ali Zeidan Abu Zuhri welcomed the Executive Chairman of the Industrial Cities and Industrial Areas Authority of the Ministry of National Economy, Dr. Ali Shaath, who visited the university to present a lecture for students specialization in geographic information systems GIS about the relationship of specialization in industrial cities. 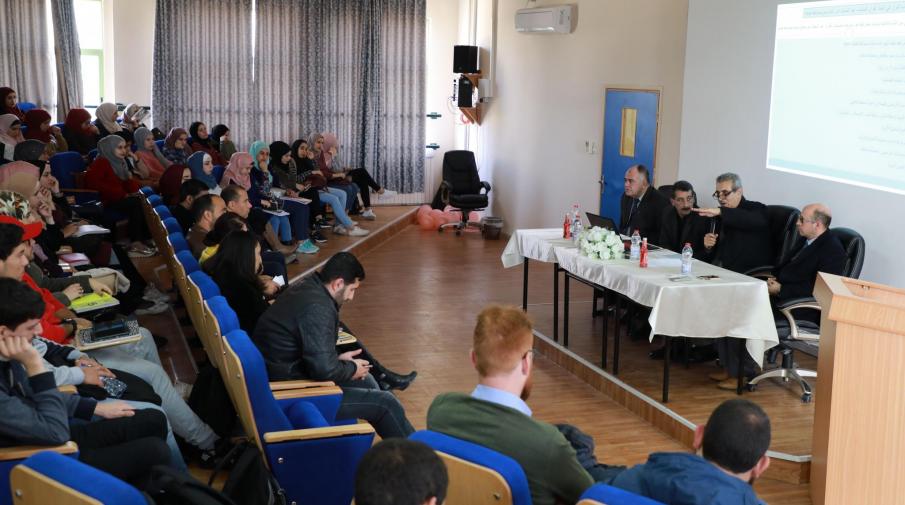 Part of the Lecture

During the reception Prof. Abu Zuhri talked about the university, its academic programs in bachelor's, master's and doctoral degrees, and the vision of the university in enhancing cooperation with national institutions in fields of common interest. Geographic information as a specialization of the present and future, and recognizes its importance in its overlap in many vital areas in Palestine.

After the welcoming, Dr. Ali Shaath gave a lecture accompanied by Mr. Mohammed Abu Kishk, in the presence of the Assistant President for Community Affairs Dr. Iyad Dalbeh, Dean of the Faculty of Engineering and Information Technology Dr. Mohammad Hamarsheh and alon with a group of students in GIS.

During the lecture, Dr. Shaath talked about the importance of industrial cities in Palestine and their role in promoting investment, providing job opportunities for graduates of universities and professionals, assembling Palestinian industries in a strategic area to be complementary industries. He explained how to create industrial cities by selecting the region, Transport lines and surveys of the region, and search for financiers to build cities and extend the infrastructure of caves, roads and water, in addition to attracting investors from inside and outside the country to start their industrial projects that will benefit the economy and the various areas of life in the province in which the industrial zone was established in particular and the generality of Palestine in general.

He added that the GIS unit in the Industrial Cities Authority plays an important role in the production of maps for all uses and by all standards, and helps decision-makers in making the right decision to talk about the establishment of new industrial cities, and the archiving, organization, analysis and representation of information for existing cities.

In order to facilitate the selection of appropriate decision makers, a geographic database of layers is needed, such as a baseline map of borders, crossings and water bodies, and Oslo Areas (A, B, C), Israeli settlement sites and the apartheid wall, land uses, agricultural value, Infrastructure, road network, water, communication and drainage network, archaeological sites, elevation lines and valleys, land area data, as well as aerial photographs.