The University Launches the event of Geographic Information Systems Day 2018, "The Role of Geo-spatial Information in Sustainable Development"

Geographic Information Systems Day 2018 was launched at Arab American University, organized by the Faculty of Engineering and Information Technology, under the patronage of the Minister of Local Government Dr. Hussein Al-A'araj, entitled "The role of geospatial information in sustainable development". 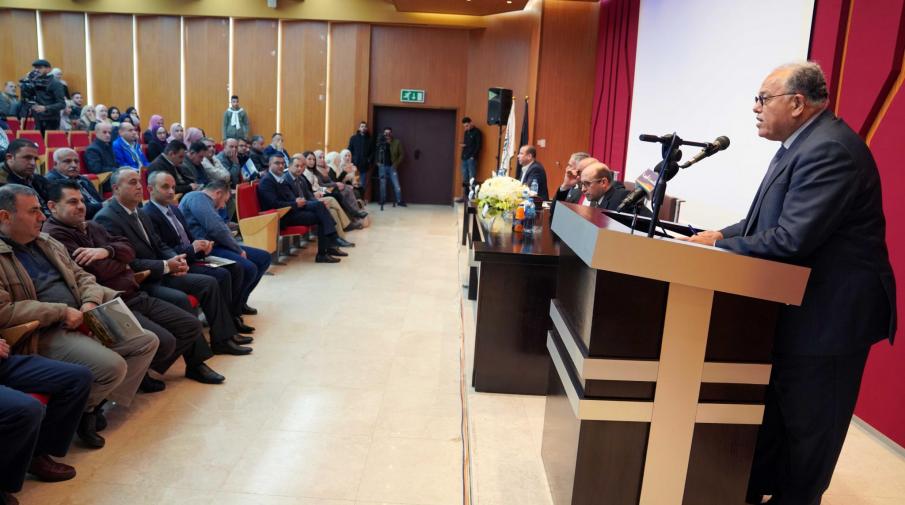 President of the University Speech

President of the University Speech

After the national anthem and reciting some verses of the Holy Koran then reading Al-Fateha on the memory of the souls of the martyrs , The President of the University, Prof. Dr. Ali Zidan Abu Zuhri, opened the event with a speech welcoming the audience and said "Arab American University, since its inception in 2000, seeks to distinguish its academic programs at all levels, in order to provide graduates with quality expertise and new specialties in accordance with local, regional and international quality and excellence standards and in accordance with the needs of the labor market. Geographic Information was launched in 2014 as the first program of its kind in Palestine to simulate regional and international pilot experiences.

He added “Our celebration of this pioneering activity comes in the context of the University's serious interest in the specialization of GIS, which plays an important role in the community in terms of sound planning and facilitation of services and providing citizens with the least time and effort,". He pointed out that GIS is an important tool for decision-makers, putting all the information on a spatial basis and on maps so that they can make good decisions easily in all institutions and departments such as local government, municipalities, education, health, transportation, public works, Assuring that the university will remain faithful to its mission, which is academic excellence, scientific research and community service, as it is always keen to provide the local and international labor market qualified and trained graduates, and able to provide what is qualitative and distinctive.

Dean of the Faculty of Engineering and Information Technology, Dr. Mohammad Hamarsheh, said: "The specialization of Geographic Information Systems (GIS) is a program that connects computer data to places and analyzes and uses it in supporting spatial decision. It highlights the diversity of the programs in the faculty and its excellence, "We recognize the need of the market for expertise in this field. We are working to raise the level of students and their expertise in all fields and applications of geographic information systems to be at the level of responsibility when they graduate and work in the local, regional and international markets," he said. Arab American University provides the necessary support for the development of geographic information systems program, attracting talents, and is equipped with modern laboratories and computer labs, and all what it takes to develop the program with excellence.

The Chairman of the Preparatory Committee Speech

The head of the preparatory committee, head of Geographic Information Systems Dept at the University Dr. Faisal Sabah said: Over the last decade, the spatial geography community has witnessed and continues to undergo fundamental changes and increased awareness of the importance of spatial geography. The technique has proved beyond doubt the various developmental roles. The Department of Geographic Information Systems (GIS) participated in the university. The GIS was organized by the Municipality of Ramallah, where they learned about the sustainable employment and wide use of Geographic Information Systems (GIS) technology in all sections of the Municipality. He explained that the graduates of the department produced a number of projects which confirmed that the application of this technology will contribute in various fields of development.

The Governor of Jenin speech

The Governor of Jenin Governorate stressed the importance of the event which is in the interest of the development of Palestinian cities and provide clear service for citizens. He hoped that the recommendations that will be presented by the participants will be carried out. He appreciated the role of Arab American University in spreading knowledge and science. He stressed the priorities of the province in providing security, safety and public order, pointing out that all works are for the interest of the homeland and the citizens

The Minister of Local Government Speech

For his part, the Minister of Local Government Dr. Hussein Al-Araj congratulated Arab American university for convening the International Day of Geospatial Information Systems, and pointed out that Palestine was able to impose a distinguished presence in the national and international map in the field of geospatial information by facts and data and gains on the ground, where it was one of the first Arab countries and even regional environment, which has a geo-information portal and has been operating since 2013, the Geomolg system, which is currently frequented by more than 2,500 users a day. He pointed out that this number represents the number of environmental, Research, inquiry and information to be analyzed and studied to reach conclusions, and solutions.

"In 2016, the Geospatial Information Infrastructure Project was launched to organize the work in the geospatial information sector at the national level, with a view to develop the technical and legal framework, which will lead to the identification of the official bodies of geospatial information in order to obtain the information directly from the competent authority. In the year 2018 Palestine was awarded and ranked first place between the developing countries to develop an operational geomagnetic plan adopted by the United Nations and was presented in New York as part of the Eighth Conference of Geospatial Information Experts last August.

Dr. Al-Araj said, the development of the work in the field of geospatial information paved the way for the construction of electronic municipal system, which considers information especially geomagnetic, such as the basic and original structure in its content. In this regard, the Council of Ministers discussed the strategic framework for the transition to electronic municipalities 2019-2023 to serve as the first building block for smart municipalities related to citizens and seek their concerns and follow their transactions and address their needs and respond to their requirements and ensure the elements of their comfort.

In the first session, which was moderated by Mr. Mohamed Abu Saft a geographer Expert.  Eng. Jamal Zitawi discussed the experience of the Ministry of Local Government and gave an analytical view of the role of the Geomolg system in sustainable development by entering its seventh year of operation. Dr. Mashhour Abu Daqah presented a paper entitled "Geographic Information Systems and Codification” and discussed how GIS enhanced the quality of services.

The second session was moderated by Dr. Mahmoud Selimia from Hebron University. Dr. Abdullah Haraz Allah from Birzeit University presented a set of data from reality need and its development into reality and the dream of achievement, while Dr. Jacqueline Gibran from Arab American University presented a working paper regarding the role of GIS in smart decision making in sustainable development. While the paper presented by Eng. Salama Awawdeh from Access Co.  was entitled "Education for Development". The session ended with a paper by Dr. Ihab Hegazi from An-Najah University entitled "Cities and Urban Information: Inventory, Flow and 3D Cities Models". 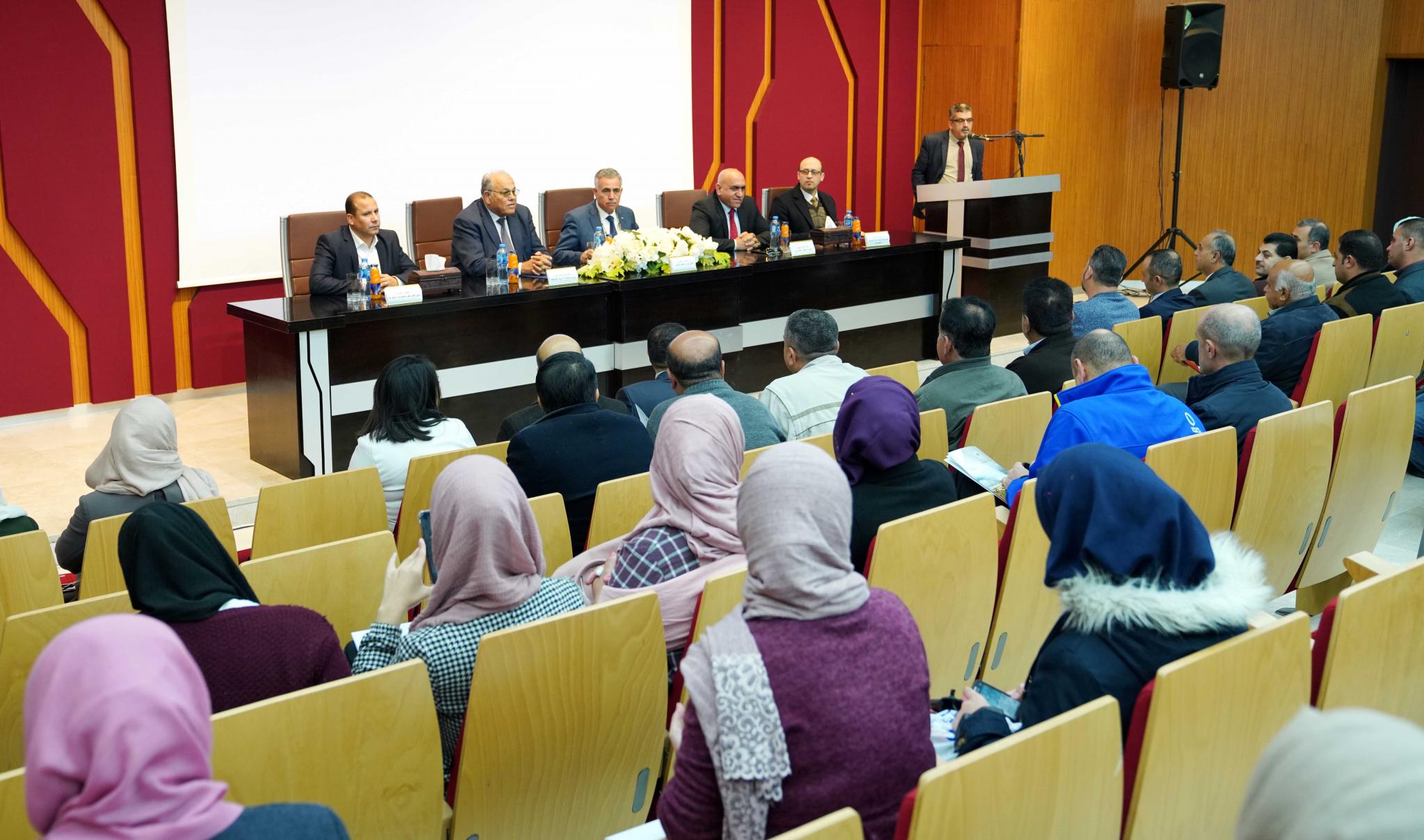 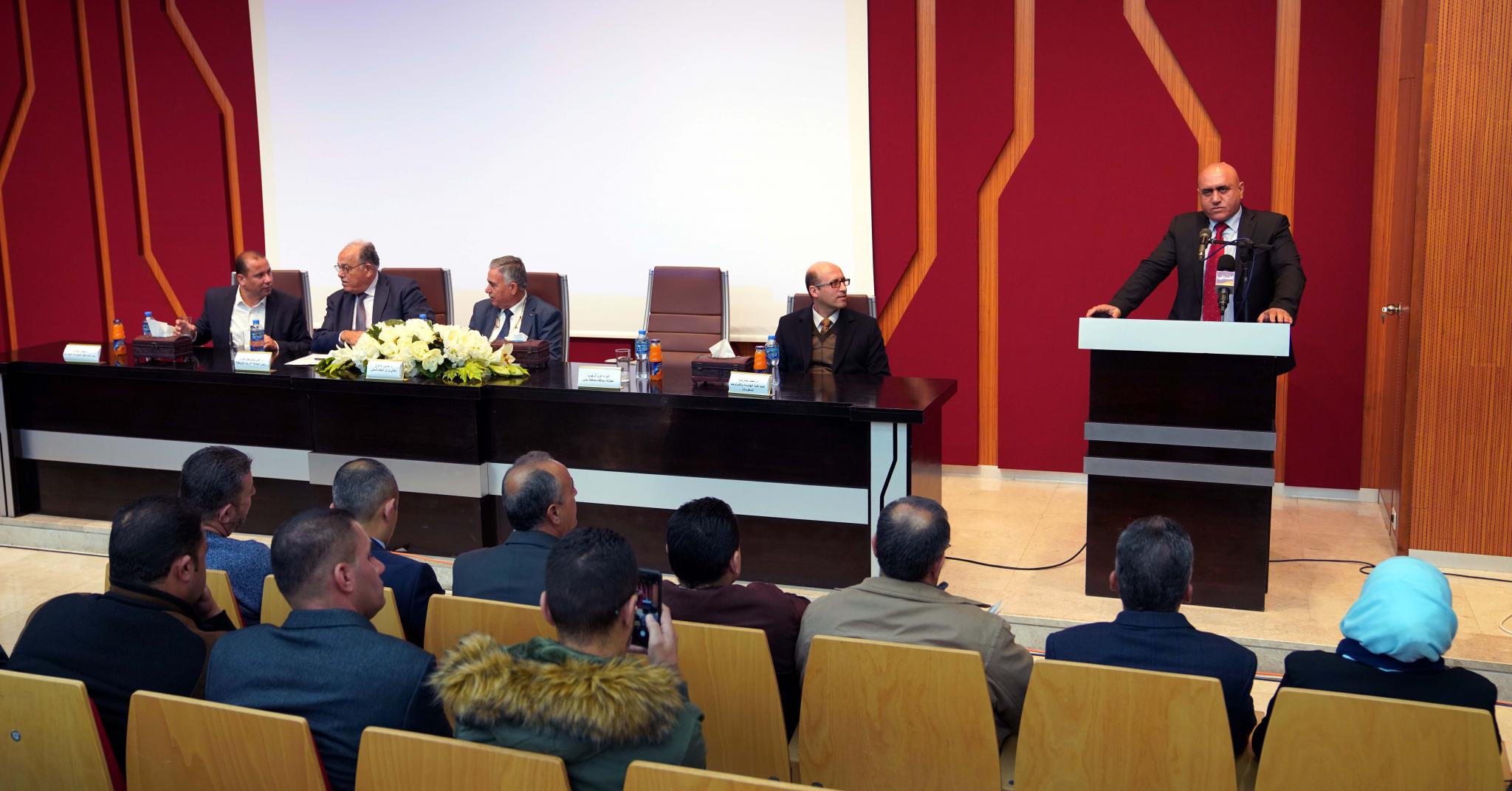 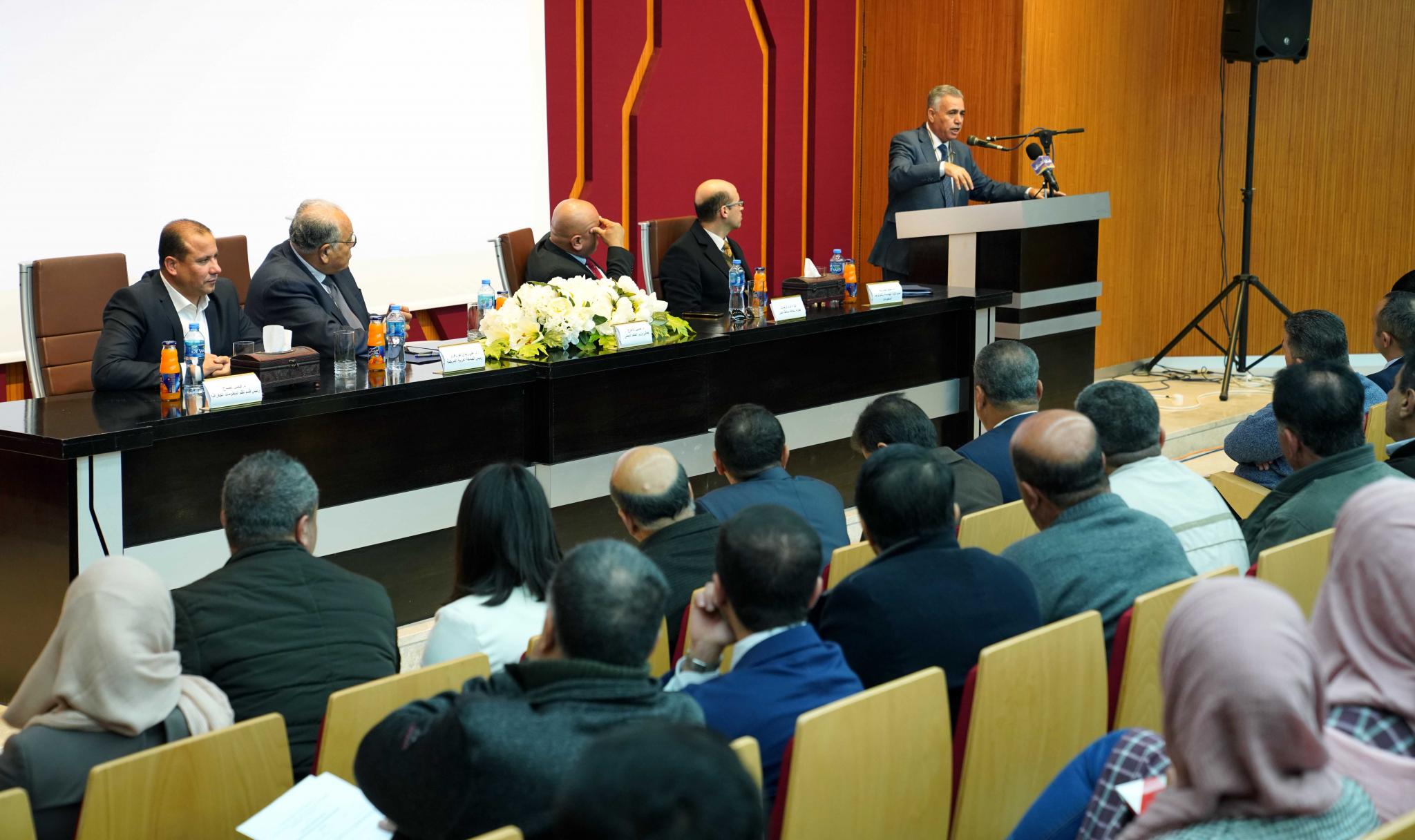 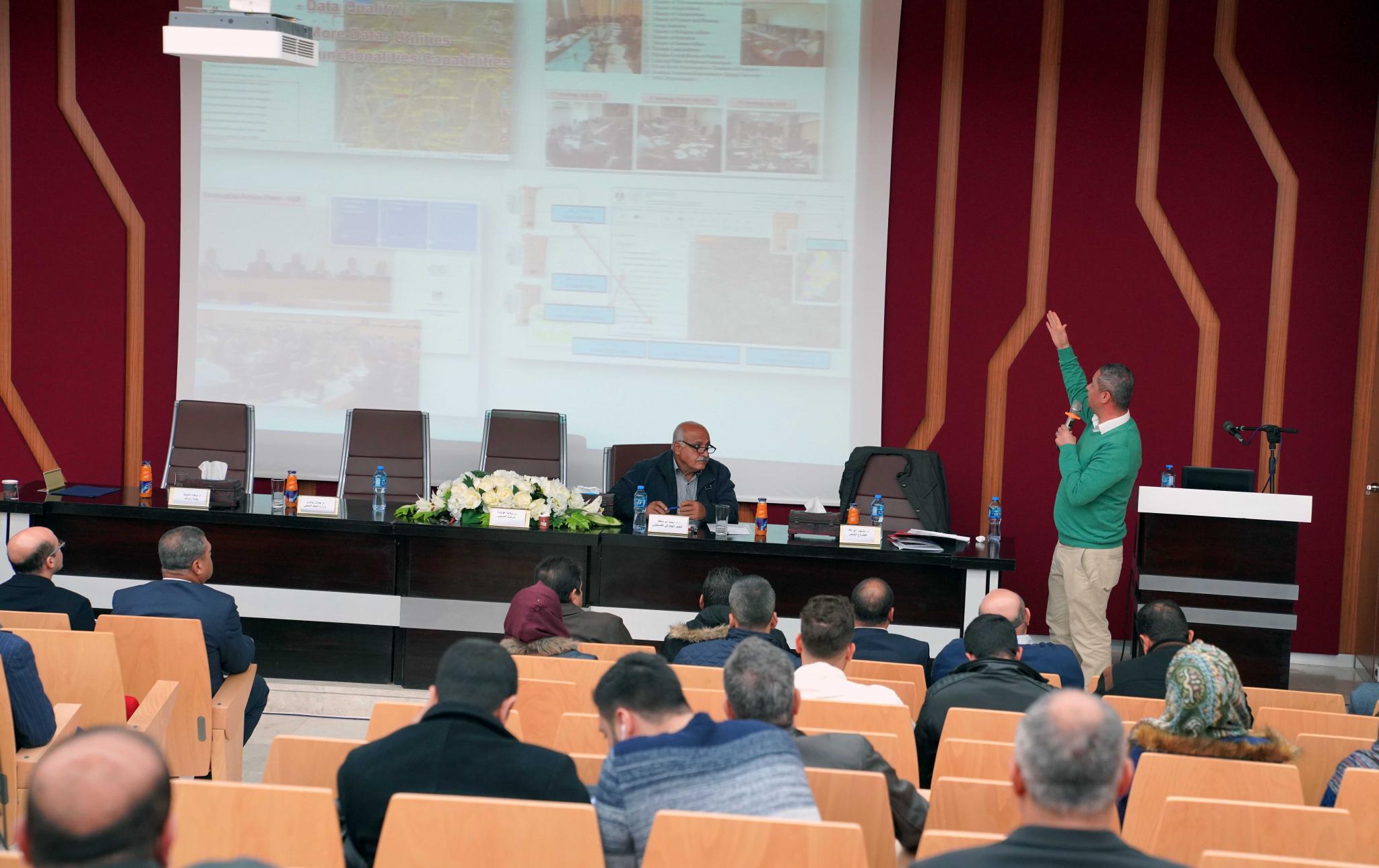