The University in Ramallah Campus Hosted the Book Signing Ceremony entitled: "The Anxious Intellectual Vs the Confident Intellectual" by Dr. Khaled Al-Hroub

The Policy and Conflict Resolution Studies Center in Arab American University - Ramallah - hosted a book signing ceremony entitled “The Anxious Intellectual Vs the Confident Intellectual” by the writer and academic Dr. Khaled Al-Hroub, the book was recently published by the Dar Al-Ahlia in Amman, Jordan, and contains 310 pages. 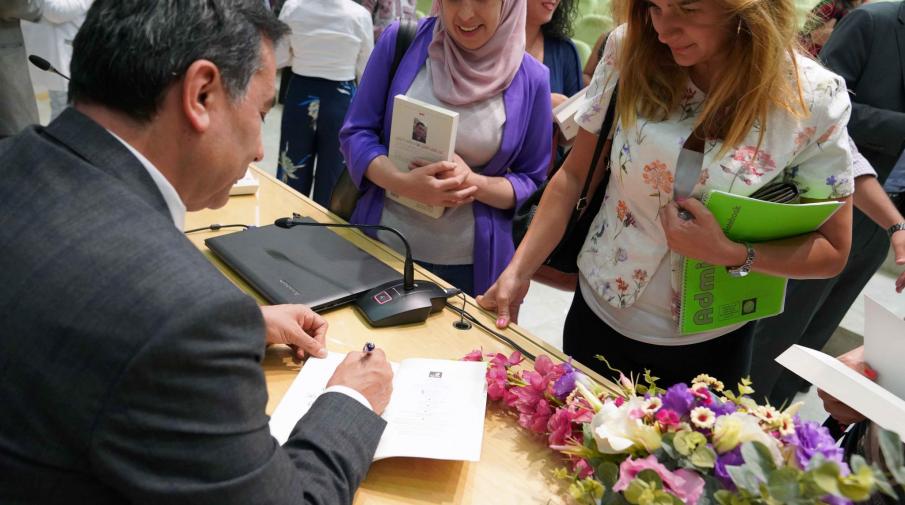 The book was launched in the attendance of the author, Dr. Khaled Al-Hroub, Chairman of Policy and Conflict Resolution Studies Center at the University,
Dr. Ayman Yousef, literary critic Dr. Ibrahim Abu Hashhash, Manager Policy and Conflict Resolution Studies Center Mrs. Rola Shahwan, members of the academic Staff, students from various master programs, a number of writers and intellectuals, and representatives of institutions interested in the culture.

The ceremony was opened by Dr. Yusuf, CEO of the Center's Board of Directors, who welcomed the attendees and gave a detailed explanation of the Center and its establishment and objectives. He also assured the importance of signing the book in an academic institution where all Palestinians are proud of, as the university also targeted students, academic and local community which allocates the university on the Palestinian intelligentsia map. He pointed out that hosting an important book signing ceremony in the university comes within the activities of the center, which hosts the intellectuals and writers to strengthen the organic relationship with the Palestinian intellectuals, especially those in the diaspora.

The literary critic Dr. Ibrahim Abu Hashhash criticized the book with his observations, pointing out that the book “The Anxious Intellectual Vs the Confident Intellectual”, is an analytical reading of the reality of Arab intellectuals today and their opinion of what is happening in the Arab of revolutions and transformations, explaining that the book goes far and deep in the theoretical presentation, and then dives into the analysis of the real side that we see and observe in the media

Dr. Khaled Al-Hroub asked a number of questions to highlight the main points of his book, where he said, "Who is the intellectual, what is his role and what changes occurred to this role. Who is the anxious intellectual, who is the confident intellectual, and what is anxious? in the measurement of thought system, ideology, religions and doctrines? explaining that the book came in two sections, conceptual and theoretical, and approaches, criticisms and worries in several realistic subjects.

He defined the Intellectuals wars as distinguished segments of the historical awareness, academic qualifications, and intellectual depth and using that for creating ideas, for the critic intellectual, as seen by the wars, is intellectual but without any prior political or ideological obligations, and the intellectuals in this segment are not absolutely immune from bias, but the social intellectual is dealing with Issues in accordance with clear opinions towards a particular socio-political idea.

Which this adds a definition to the Arab intellectual, where he is known to be busy in creating his ideas and has a reasonable amount of thought, culture and deep knowledge, and harnesses that knowledge in the interest of public affairs and engages in it, as he is interested in changing the current status through introducing a new full vision or a partial one or maintain the current status and defend it according to the concerned intellectual and his location and position, and refers to patterns of intellectuals as apologetic, oppressors, justificatory, populist and independent. In terms of behavior he refers to the characteristic of many intellectuals such as hesitation, cowardice, atonement and exclusion.