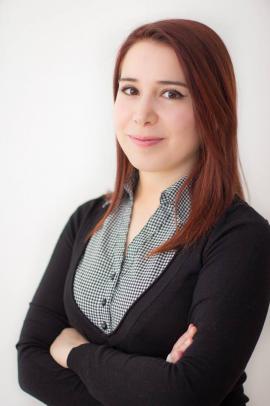 Alaa from Jerusalem graduated from Arab American University in 2010, specialized in administrative information systems at a rate of 3.99 from 4, which ranked 1st student among the university.

Alaa received a scholarship from DAAD, and studied MA in IT project management at the Dortmund University of Applied Sciences. During her study, Alaa worked as an assistant project manager in information systems department of RWE Innogy, the largest renewable energy company in Germany.

Alaa returned to Palestine in 2014 after she finished her Master degree, and worked as an advisor for the Minister of Communications and Information Technology to the implement the system of governmental data exchange with the cooperation between Estonian government and institutions of the Palestinian state. At the end of the project, 10 electronic services were launched among 10 Palestinian government institutions within the Electronic Governmental strategies.  At the same time she worked as a lecturer in project management at the Faculty of Law and Public Administration at Birzeit University

In 2015, she worked as a research assistant in the Middle East Foreign Relations Committee of the German Parliament in Berlin, where she participated in preparations of reports to analyze the economic and development conditions in several Arab countries, including Palestine.

In 2016, she decided to start her doctorate studies her thesis focused on project management for collaborative research funded by public sector under the joint supervision of University of Basque Country and Dortmund University of Applied Sciences. The results of her research were published in international conferences and hopes to present her results in project management magazines.

Her advice for students

All dreams, no matter how big they are they can be achieved, if you have the determination and ability to act on them. When you achieve your dreams and reach to your desired position in life, do not forget your role towards Palestinian people and its cause, all together, with the diversity of our fields we can build our state and have our freedom.