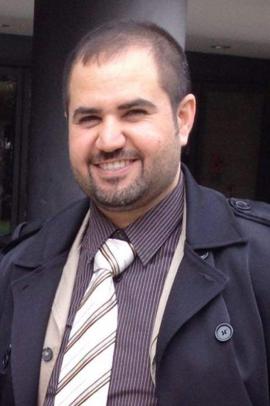 Dr. Osama Al-Abdullah from Qalqilya is the Acting Director of Biotechnology Department at the National Center of Agricultural Research.

Dr. Osama graduated from Arab American University in 2007, specialized in biotechnology. As he was the head of the Mendel Club of Biology and Biotechnology Dept. at AAUP.

Adding to Dr. Osama’s achievement he has earned the Hijjawi Award for Scientific Research in Palestine from Arab American University during his graduation year. After his graduation, he worked in the Palestinian Ministry of Education as a biology teacher. After that, he received a Master Scholarship from “Bari Agricultural Institute” in Italy, he earned his master degree in Agricultural Pest Management in 2009 with an honor certificate, and defended his theses entitled "The Detection of Olive Viruses".

Dr. Osama worked in many Palestinian universities as a research assistant and part-time lecturer till 2013. During that time, he applied for a PhD scholarship from Rome University in Italy. He successfully earned his PhD degree with an honor certificate in plant biotechnology in 2016 and ranked first place.

When Dr. Osama returned to Palestine, he worked as a researcher at the National Center for Agricultural Research of the Ministry of Agriculture in Jenin mainly in Biotechnology Dept. As he also worked as a part time lecturer at AAUP in Biology Dept. for a year.

Dr. Osama is currently working as the Acting Director of Biotechnology dept. at the National Center for Agricultural Research. Where he is responsible of supervising the test of Phytosanitary labs for Plant Protection of the Ministry of Agriculture. furthermore, he is also an external examiner for master's theses in Palestinian universities, and a founder member of the Biotechnology Union and the Scientific Committee official.

Choose the specialization you desire and draw your goal and do what it takes, don’t wait for the right time but create your opportunity and manifest the life you want.