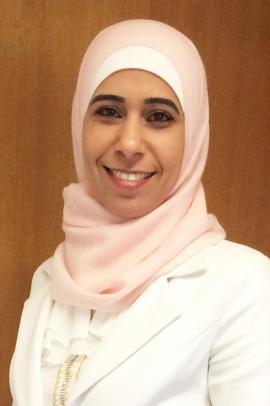 Rasha graduated from high school with a grade of 96.4 in science. Then studied at Arab American University and graduated from Faculty of Administrative & Financial Sciences with a distinction of 3.85 and was first place at her Faculty.

After graduation she worked for a period as an office manager in a company in Ramallah. Several months later she received a German DAAD scholarship for her master's degree at the University of Jordan and graduated from the Faculty of Economics and Business, specialized in financial and banking sciences with a distinction of 3.94 and was first place at her Faculty.

Rasha worked at An-Najah National University for one year in teaching, then started her academic work at Arab American University as a full time teacher until today in addition to her work in some administrative committees within the university. During this period, she participated in many academic exchange activities with several Italian universities in 2010 and Coventry University in Britain in 2014.

In 2015 Rasha received two scholarships to complete her study, Erasmus Plus for a doctoral degree in Portugal and the second a Turkish scholarship to study in Turkey. Rasha went for the Erasmus scholarship. In the year 2019 she received the doctorate degree from the University of Menio in Portugal in financial and banking sciences with a grade of “very good”, which is the highest grade given by the university.

During her doctoral studies, she was elected by the students of the program to be the representative of the students at the faculty and during this period she did several academic and social activities. She has participated in several international scientific workshops and conferences in Romania, Bucharest (Hungary), Hungary (Budapest), Portugal (Braga and Lisbon), and many scientific publications in refereed international magazines with excellent classification and influence.

What Rasha says about her success:

The most important thing is to have a role model in a person’s life to follow in addition to setting goals in young ages and learning to pursue them, to also have faith in yourself is essential and failure is a stage for everyone to pass in order to achieve their success.