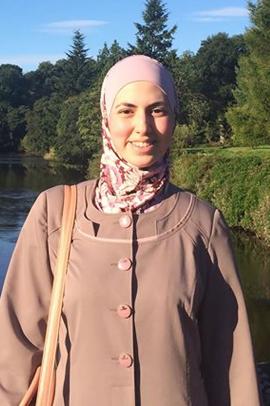 Dr. Thabat Al-Khatib works as a researcher in Applied Neuroscience at the University of Aberdeen – Faculty of Medicine, she graduated high school from Arab American school in Jenin 2009 with a rate of 98%. Then graduated from Biology and Biotechnology program at Faculty of Sciences and Arts from Arab American University in 2012 with a rate of 3.95 first in her specialization and third place among the university, after that she directly joined Master program in Life Sciences at Al-Najah University, her thesis was about “Cancer” she graduated in 2014 with a rate of 4 and was the first among her university.

Her Ambition did not stop at the Master degree but she also studied PhD, she submitted her application to many European universities, to begin her dream in the University of Aberdeen, "the fifth oldest university in Britain". She completed her studies there through a partial scholarship to study at the Faculty of Medicine. After three-years she received the doctorate degree in Applied Neuroscience with excellence degree in March of 2018.

Al Khatib started working as a researcher in Neuroscience dept. at the University of Aberdeen – Faculty of Medicine, and currently works at the specialized department for Scientific Studies in research and experiments related to Neuroscience. In her work she seeks to find new medicines and drugs for nervous system diseases, especially Alzheimer's disease.

During her doctoral studies and as a researcher she published numerous articles in various international scientific journals, and attended many international conferences in Britain and abroad, gave lectures and collaborated with various universities in the field of scientific research and supervised many undergraduate and master's students, and was able to provide funding to the University of Aberdeen "worth £ 400,000" to develop drugs and studying Alzheimer's disease.

“I focused on Alzheimer's disease in my research because it is the most common form of dementia that affects the nervous system, which is about 60% to 70% in the world”.

The first and second patents were about the same idea, which is the development of a new drug formulation that affects the neurons and improves their performance in different ways. These formulations may benefit various neurological diseases, especially Alzheimer's disease. The discovery of the formula began by noticing that older people with Alzheimer's disease there is a lack in a chemical substance called retinoic acid and a malfunction in the body's system. This substance is usually derived from vitamin A and provided to the body, the substance cannot manufacture it by itself. So we have manufactured a similar, more powerful and more effective form of retinoic acid. These drug preparations are currently under study in the laboratory to see its long term affects, and we hope that they will soon pass on to human clinical trials. The operation is expected to take several years. "If everything goes smoothly, it will be the first of its kind in the world in terms of formulation and function and will benefit patients on a large scale."

Her advice to the students

You should believe in yourselves and in your abilities and not give up regardless of the challenges you may face, with hard work and faith you can achieve your dreams and do what is impossible..