In a virtual ceremony and while lighting its buildings in both Jenin and Ramallah campuses, Arab American University announced the beginning of its celebrations on the occasion of its 20th anniversary, along with projecting a film about the development of the university in the academic, researches and structural fields.

Arab American University celebrated its 20th anniversary of excellence, giving and creativity, in addition to its new strategic and developmental programs, 20 years of partnerships and collaborations to contribute in building a free independent country, 20 year with over 18 thousand graduates. 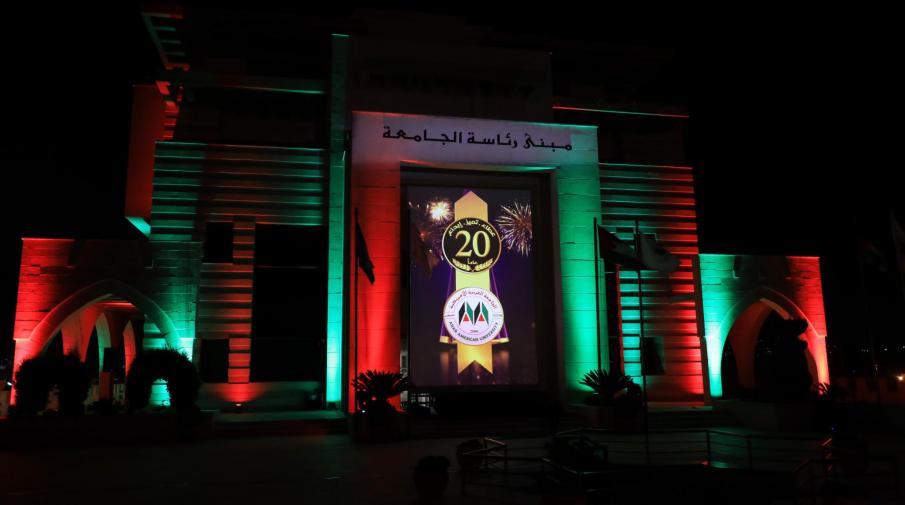 AAUP celebration in its 20th anniversary

Prof. Ali Ziedan Abu Zuhri- the University President in his speech at the ceremony said: “We now virtually celebrating the 20th anniversary of our university due to COVID-19. This pandemic showed the world the importance of education to serve humanity, and this was and still is a base in our university as it aims to be an academic edifice to serve the community and fulfill its needs. Arab American University has succeeded to guarantee the continuity of the educational process during emergency circumstances and proved its capability to create new ways to keep the value of its mission.”

He added that this pandemic was a hard test that AAUP has passed successfully in steady pace while targeting a better future. This has proved the firmness, cohesion and integration of the university in its ideology and academic community.

Prof. Abu Zuhri assured that AAUP played an important role in the academic, scientific and cultural fields in a region that was in dire need of such a large edifice, and it was a fertile environment in which the community interacted with science, culture and knowledge. He added that there is a saying: “If you want to change a society, you need to provide an inspiring model to ensure that success and development are possible.” and then added that: “And I ensure you that Arab American University is an excellent model in this country especially when everyone in it believes in education and knowledge despite the difficulties”.

“In AAUP you can find a successful management model, an inspiring union experience that made us all stronger, a great attention to scientific researches and a place for thoughts and creativity that provides hope in life and belief in education. The competition spirit and the desire to keep pace with the current era made us always ahead.”

Prof. Abu Zuhri added that “When we remember the university’s communication and relations with the local community, we should not forget to thank this community which welcomed the idea of the university since day one and supported it in its road to success mainly because this community realized they have athirst for education and knowledge.”

He clarified that: “Our slogan in this ceremony is the three words of: giving, excellence and creativity. However, I would like to add a fourth word which is “faith”. Behind this educational edifice is a great faith that drove the founding believers. As huge the achievement is, as much as we believe more in miracles, the obstacles were many and the difficulties were hard, but we kept on going armed with education, wisdom, patience and good management.”

Prof. Abu Zuhri concluded his speech by saying: “20 years ago, the slogan for Arab American University was “we will provide you with excellent education without the need to move out from your country”. And now we promise you to bring the world to you, with its best experiences and latest achievements. We promise you an environment full of development, competition and continuous change. We now fold the page of the past 20 years and start a new chapter with new future of development.”

In his speech, Dr. Yousef Asfour- the Head of the Board of Directors said: “We now stand full of pride, determination and hope in the same position where 20 years ago we stood in a land in Jenin to announce the opening of Arab American University_ a historical moment to Jenin and Palestine that changed the higher educational map in Palestine.” He added that “we were young with great expectations. We wanted this university to be a place for students from inside the green line, and now, 20 years later, this dream became true as half of our students are from inside the green line. We had an ambition to link our university with other American and European universities to provide modern and excellent education to our students, and now in less than 20 years we provide tens of new modern academic programs. We hoped for our graduates to be in important positions inside and outside the country, and now 20 years later, we can see them all over the world in great positions in the USA, France, Belgium, UK and most of the gulf countries beside Palestine.”

Dr. Asfour concluded: “We promise you that we have entered the race to excellence and we will never quit from this race that has no end line. All our respect to whom who have contributed in building this great educational edifice.”

During the ceremony, the University Presidency Building and Ramallah Campus were lighted in the colors of the logo of AAUP “green, red and white” and a short film was projected showing the development of the university through years and the numbers of students and academic programs in the university”. 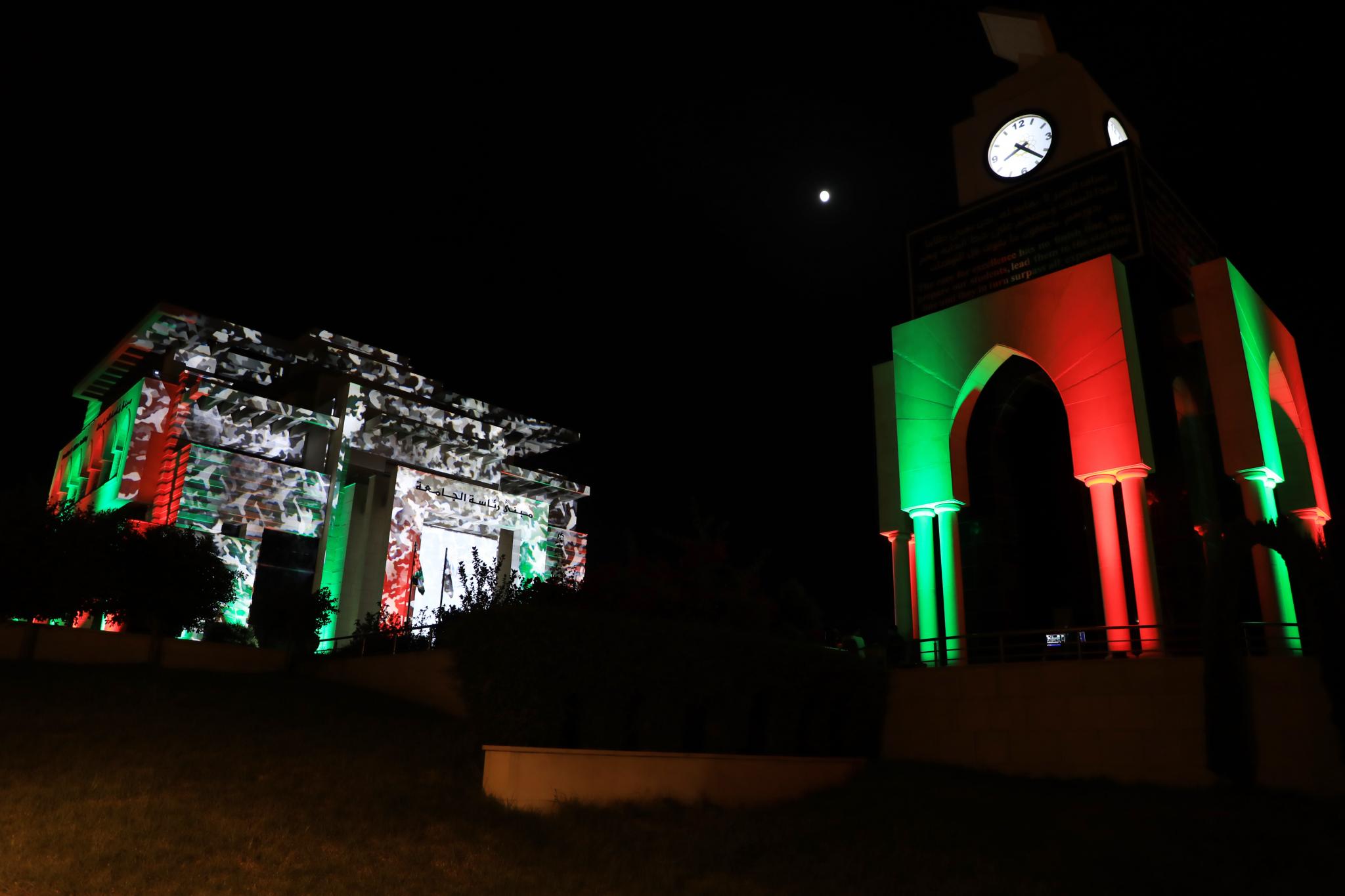 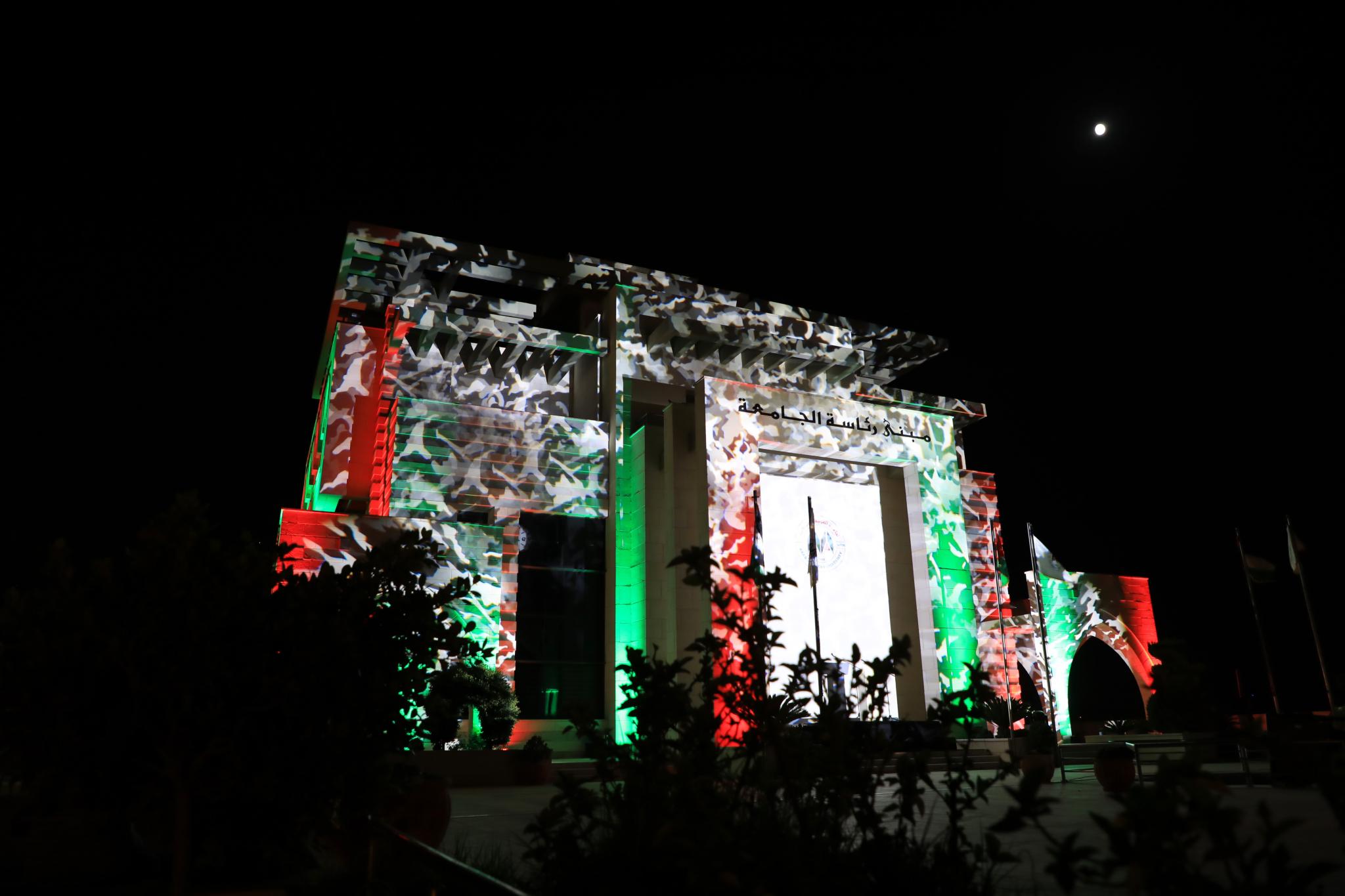 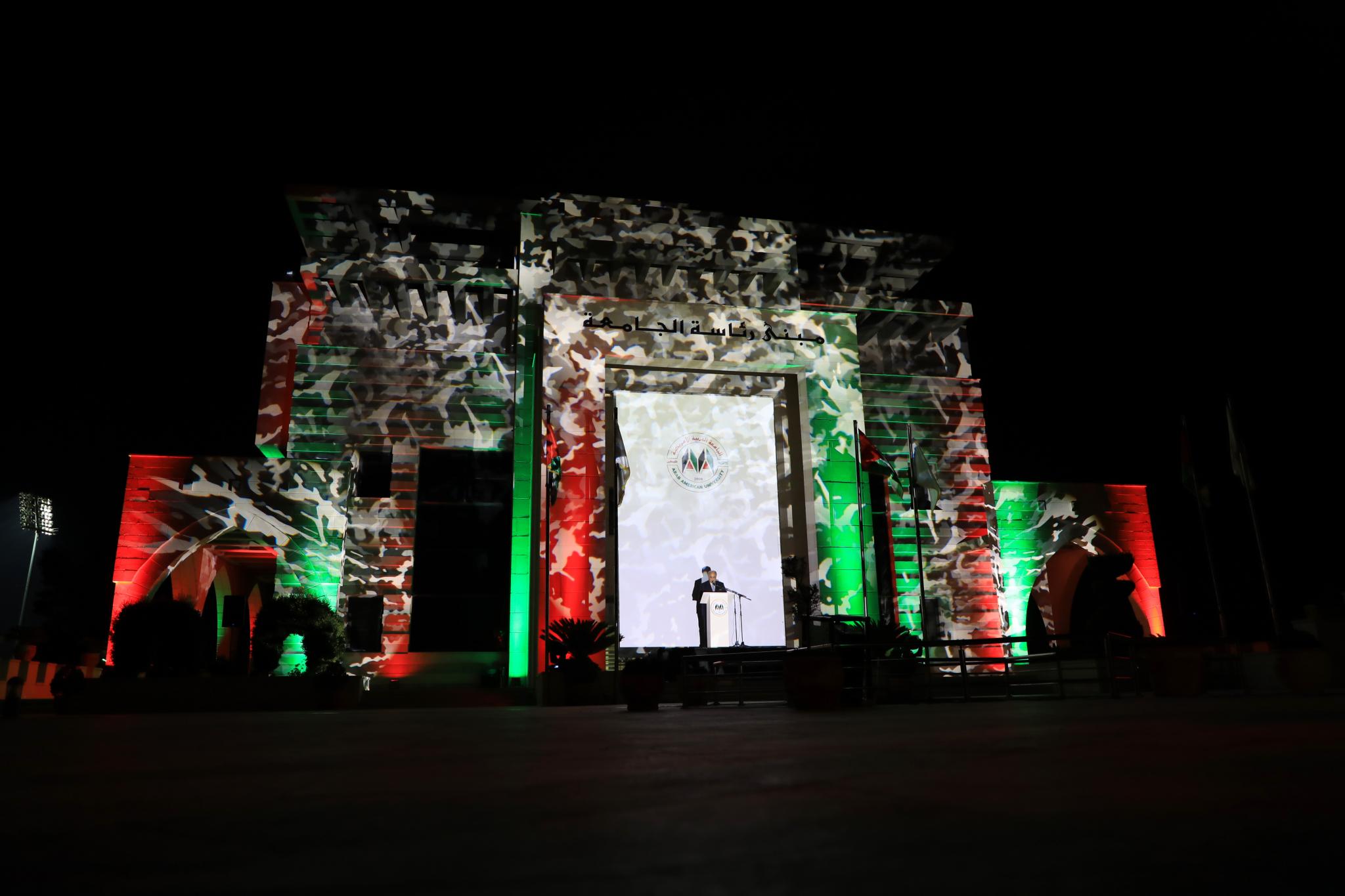 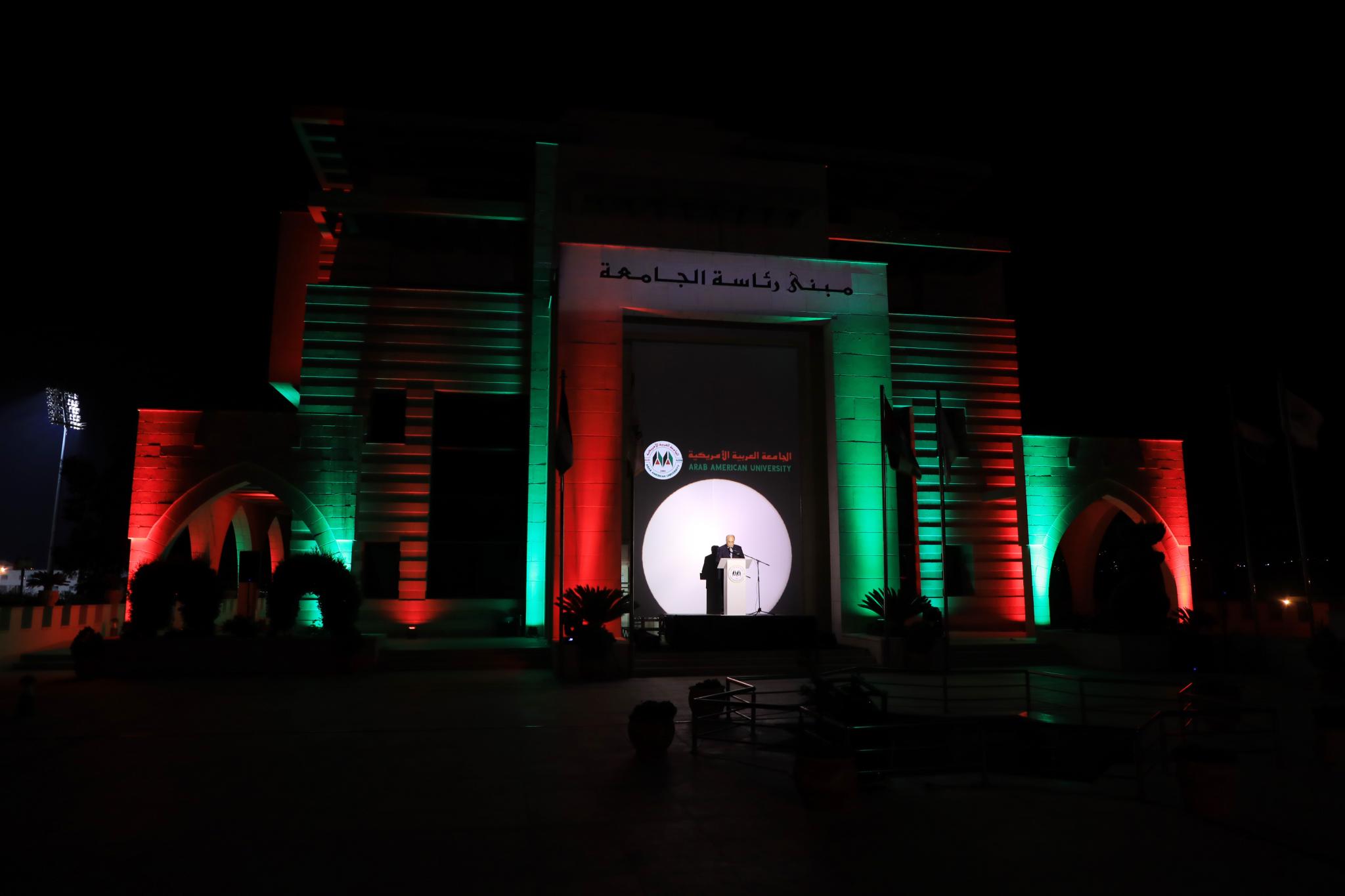 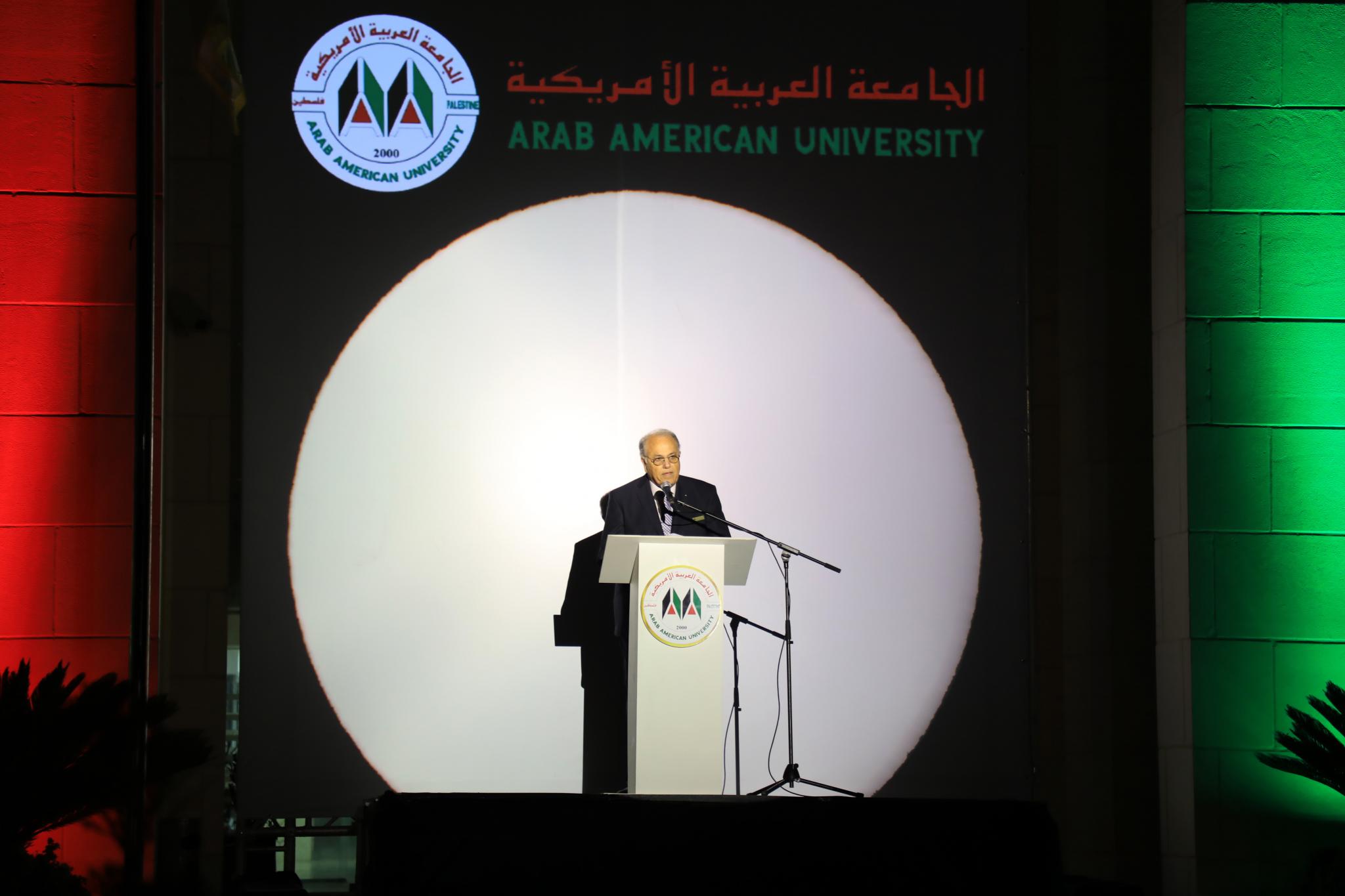 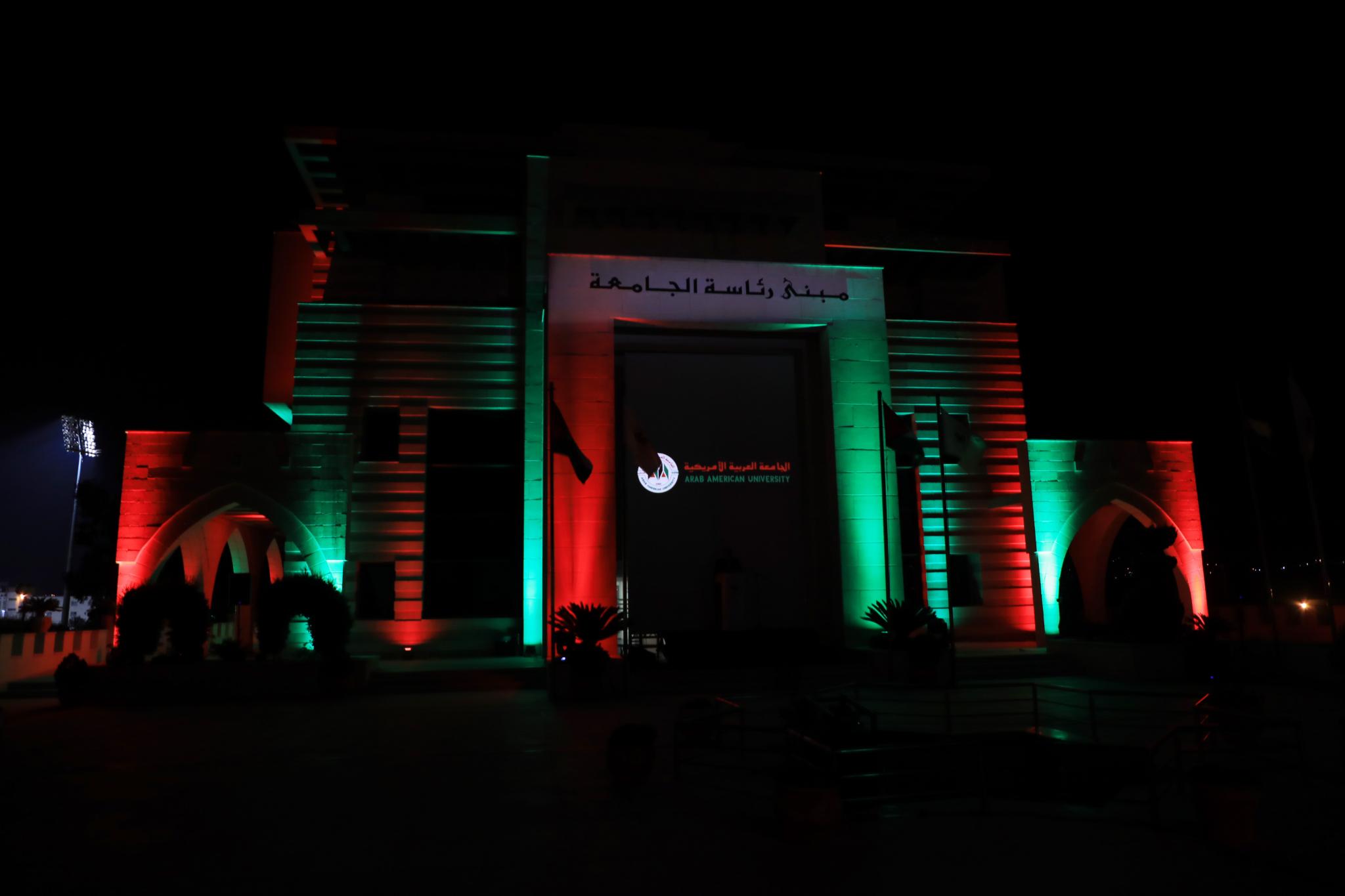 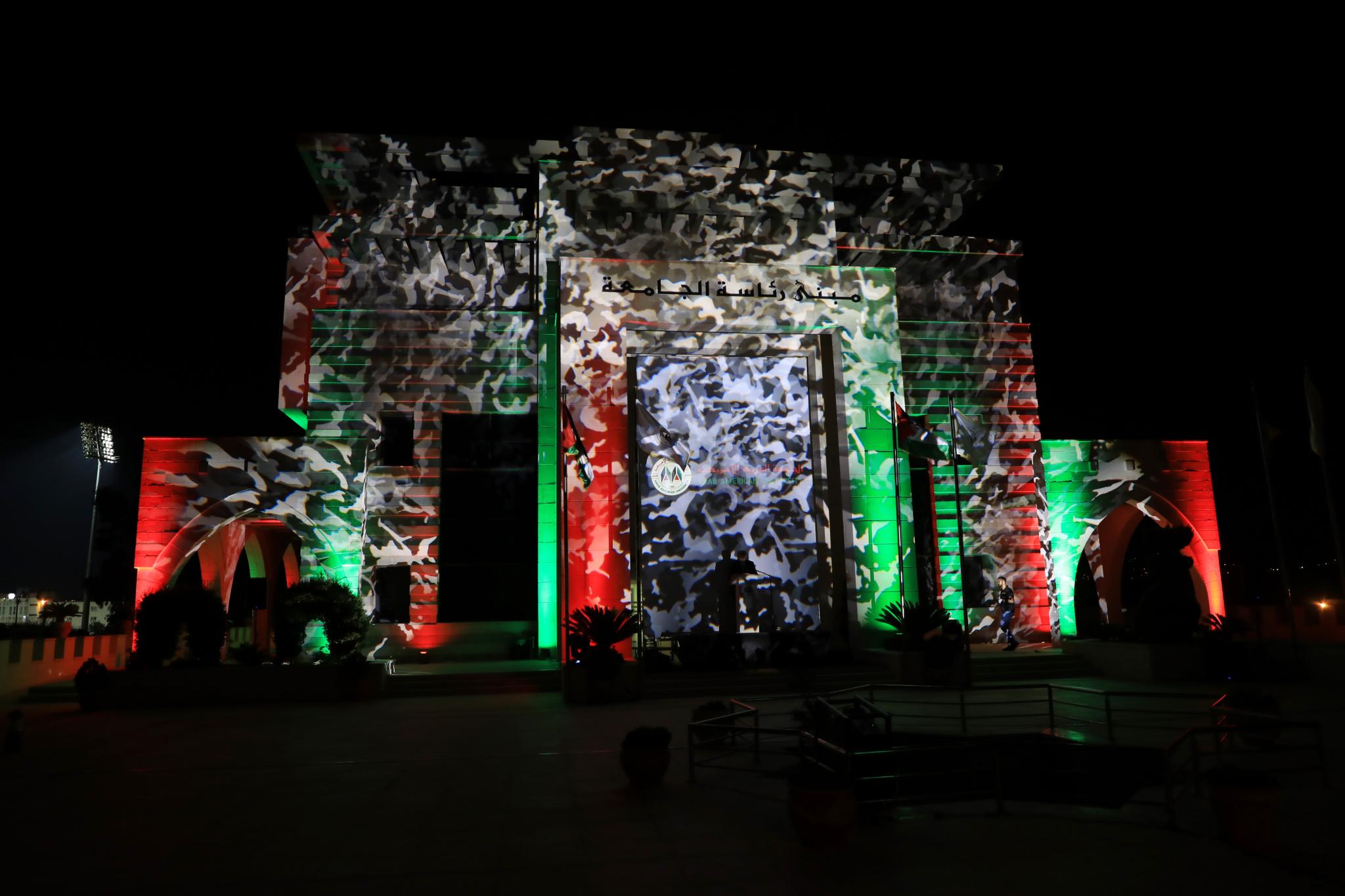 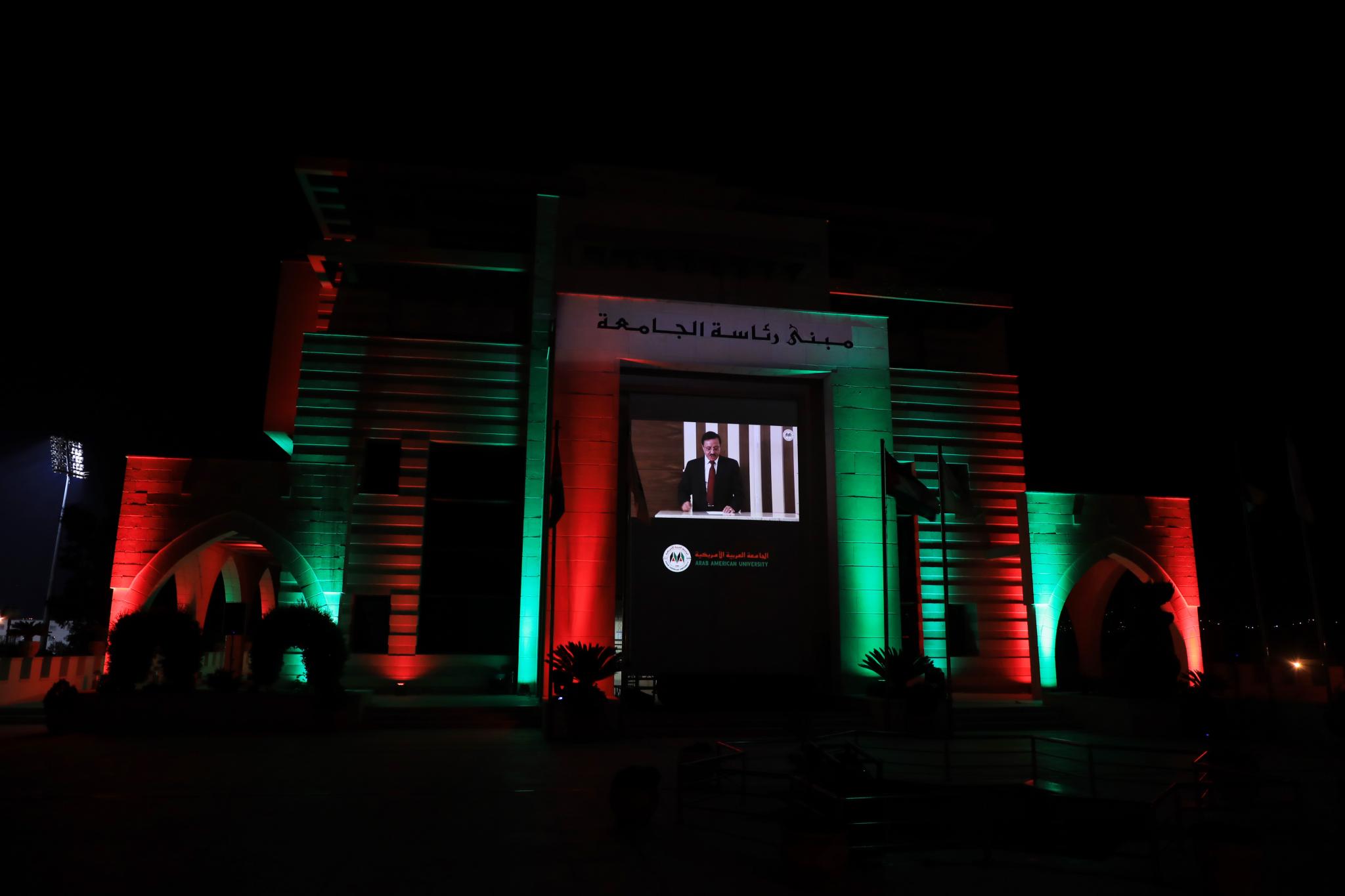 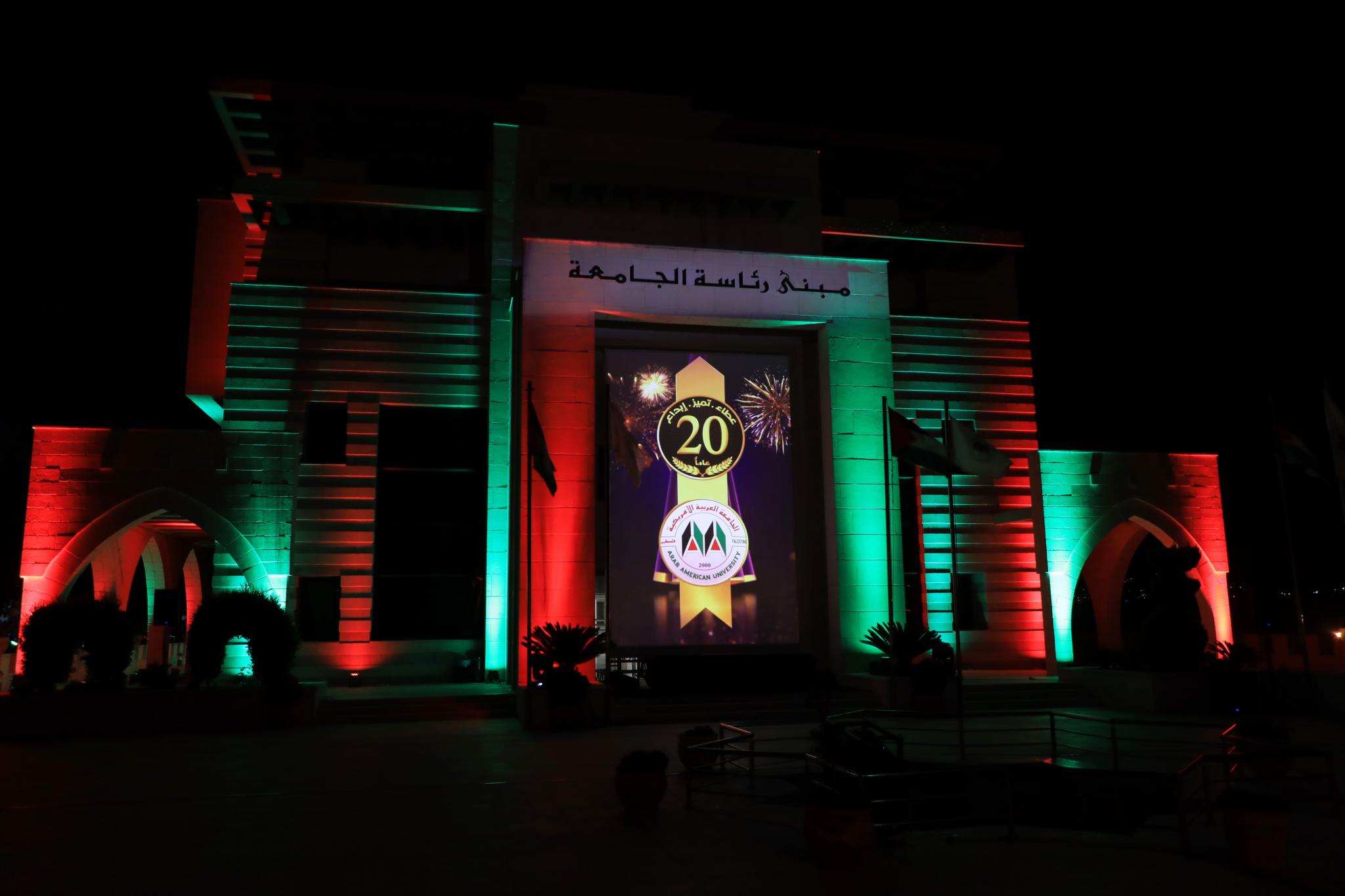 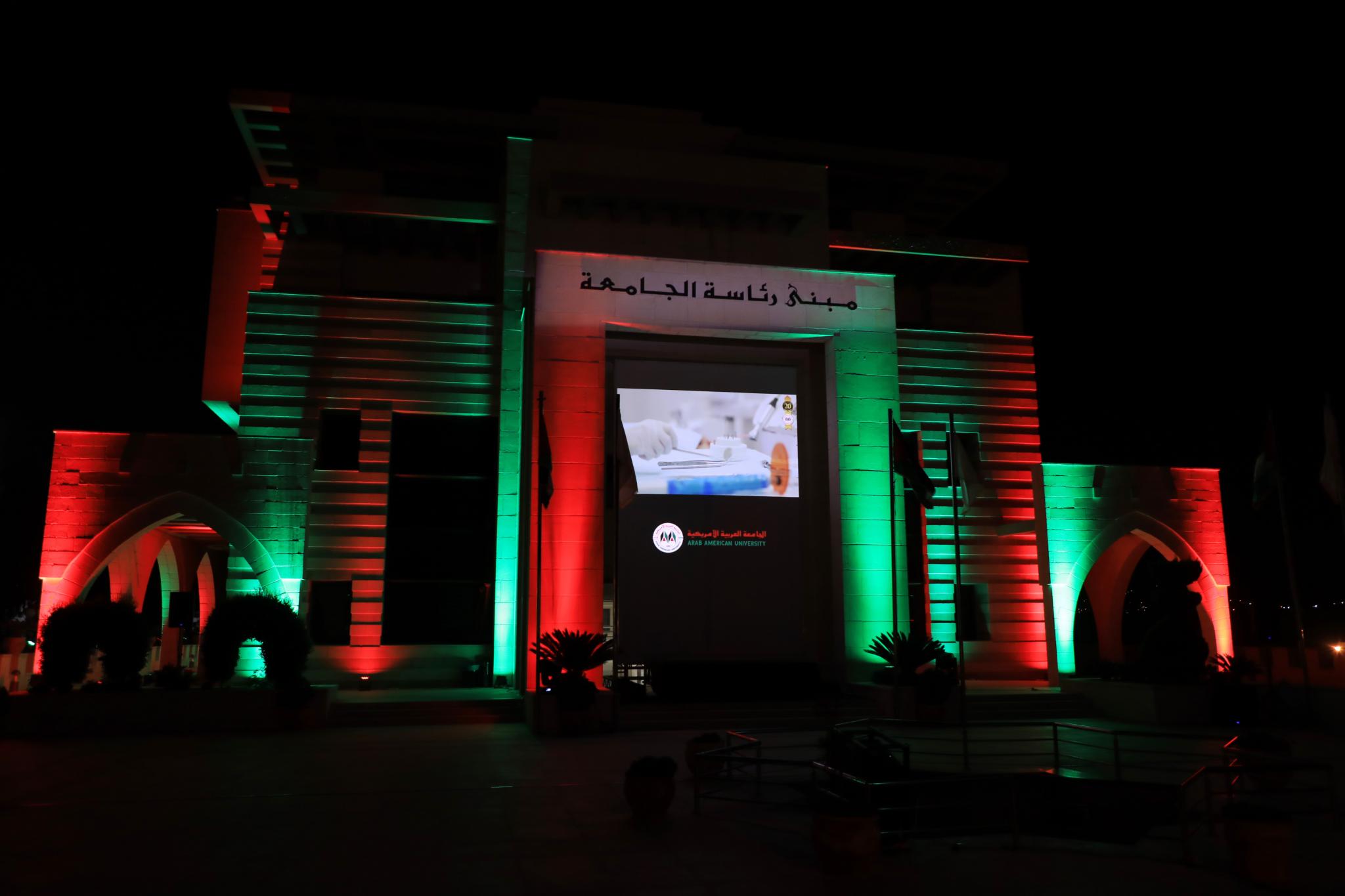 On its 20th Anniversary, AAUP and under a Joint Partnership with the Ministry of Education and the Supreme Council for Youth and Sports Organizes a Marathon "To Support Massafer Yatta Case"
14 Apr 2021
END_OF_DOCUMENT_TOKEN_TO_BE_REPLACED