AAUP Concludes the Graduation Ceremonies of its 17th and 18th Cohorts

Arab American University concluded the graduation ceremonies of the 17th and the 18th cohorts that were organized Under the auspices of the President of the State of Palestine, His Excellency President Mahmoud Abbas "Abu Mazen", and the final day was a great celebration for the students of the Faculty of Administrative and Financial Sciences, Faculty of Arts, Faculty of Law and Faculty of Sports Sciences. 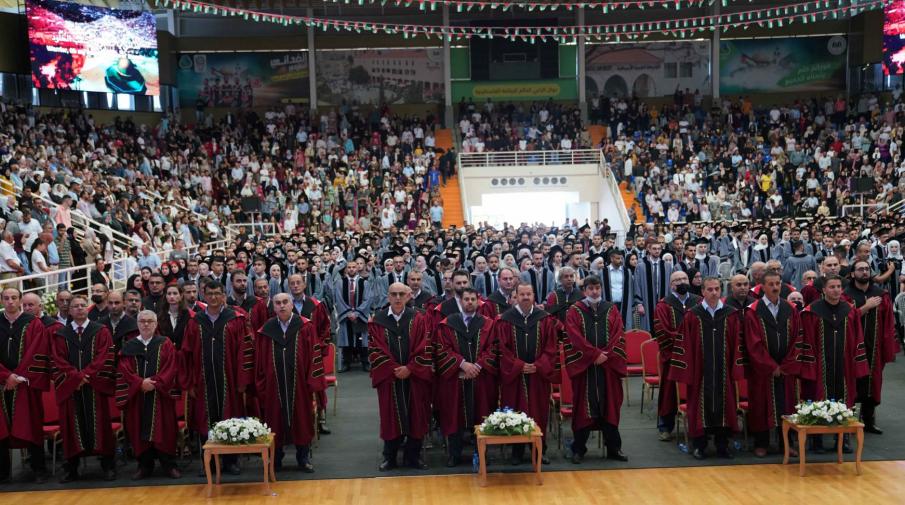 The celebration was under the auspices of the President of the State of Palestine, His Excellency President Mahmoud Abbas "Abu Mazen" and attended by Dr. Moayad Abu Saa- the VP for Academic Affairs representing Prof. Ali Zeidan Abu Zuhri- the University President, Prof. Mohammad Asia- the VP for the Medical Schools Affairs, General Akram Rjoub- the Governor of Jenin, representatives and leaders from the security services of Jenin, members of the Academic and Administrative staff, representatives of official and private organizations and a great number of parents and family of graduates.

Speech of the University President

Dr. Moayad Abbu Saa- the VP for Academic Affairs started his speech on behalf of the University President “Ali eidan AbuZuhri” by transferring the greetings of Arab American University to the President of Palestine, His Excellency President Mahmoud Abbas "Abu Mazen" and said: “We are happy to see you today after the unexpected events that prevented such celebration in the previous year, to celebrate together the graduates from the Faculty of Graduate Studies and the firsts on each department, and to announce the beginning of the graduation ceremony activities that will be starting today and for the coming three days. We will be celebrating the 17th cohort that COVID-19 spread last year could not let us celebrate and the 18th cohort who finished their graduation requirements. Dr. Abu Saa added: “Arab American University in its both campuses in Jenin and Ramallah became one of them most important education provider in Palestine and the region and its staff, graduates and projects have the main role in building the country. We praise and thank His Excellency Mr. Mahmoud Abbas for his support and we appreciate his role in saving our national constants, and his scientific role in his permanent support for the educational process”.

Dr. Abu Saa also said that Arab American University seeks to follow all the new topics academically and to develop its infrastructure and scientific capabilities to provide the best to the Palestinian community through graduating professional students from modern faculties and programs that fulfill the needs of the local, regional and global labor market. He also indicated that during the past two years, AAUP managed to open new faculties and new academic programs according to accurate studies of the current and future needs of the market, including the Faculty of Medicine and some other creative bachelor and masters’ programs, and in this year alone the university provided 11 new PhD programs.

Dr. Abu Saa also talked about the centers provided by AAUP to serve the local community and develop the community, such centers as the climate change center that has a weather station that covers the northern part of Palestine, also the smart green house for agriculture, the policy and conflict resolution studies center, the cancer cases registration center, the heart center and other centers such as the treatment centers for the community as the physical and occupational therapy centers, the dental center and the children rehabilitation center. Moreover, the laboratories in AAUP had a distinguish work under collaboration with the Ministry of Health during the COVID-19 crisis in their advanced laboratories.

The Vice President for Academic Affairs also announced about the new centers that will open soon and new high level projects as he said: “we now announce that we are planning to soon open three high level services centers which are: the Physical and Occupational Physiotherapy Rehabilitation Center, the Hearing, Speech and Language Diagnostic and Treatment Center, and the Prosthetic Limb Factory Center which is the first of its kind in the Middle East, additionally, AAUP will start working on rehabilitation process to people with special needs to enable them to get a driving license under collaboration with the Ministry of Transportation. Furthermore, we announce the opening of the first center to the 4th education in technology the AR.VR as this center will provide modern training services for students and professors and will add a contemporary education in the medical and biological sciences under the best international standards to serve the local community that we are part of it”.

Dr. Abu Saa added that the achievements of AAUP serve the students, the local community and the country and said: “Thanks to God, and the efforts of the staff of AAUP, we are providing many services to the students, to our people, to our community, and our country. For instance, AAUP has opened its half-Olympic swimming pool to its students and to the local community, the squash fields host official games for squash, and the sports hall hosted international games in the basketball field especially after considering its field as the home field for the Palestine national basketball team”. He added, “Allow me on behalf of the academic and staff of AAUP and on behalf of the local community to thank everyone who was part of doing this and reaching AAUP to this stage, especially Dr. Yousef Asfour- the Chairman of the Board of Directors, and the members of the Board for their continuous care and support to provide all the academic and administrative needs, all thanks and appreciations to them”.

At the end of his speech, Dr. Abu Saa concluded by directing his speech to the graduates and said: “I congratulate you on your graduation from you second home, and wish you all the best of luck. You are now the ambassadors to our university and to the country, and you are about to start a new chapter of your life, be ready and set your goals to walk the best bath for your goals and do not walk aimlessly even this was easier for you to do. I would also like to congratulate your parents who waited for this moment. Thank you all for your efforts, wish you the best of luck for your life and for Palestine”.

In the graduates’ speech, student Duha Hamed from the Faculty of Law said: “while we are seeing those four years ending, we are finishing a great four years of our lives that we will always remember, four years that ended really fast”. And added: “After all this, it will be hard to leave this place and hard to say goodbye. My greetings to this wonderful edifice in this holy land”.

Ms. Hamed added: “Yes it is Arab American University, with its professors and students, with its great dreams and ambitions, drawing the best future for a country that faced hard times under occupation and under the pandemic”.

She also thanked the academics who work hard to graduating new generations who know the value of education. She also encouraged the graduates to start building and working after the years of studying and that the country needs the educated and expert people to develop it.

Speech of the Guest of Honor

In his speech, General Akram Rjoub- the Governor of Jenin congratulated the graduates and said: “I stand before you and your parents today in the University of all Palestinians, and I congratulate you on behalf of His Excellency Mr. Mahmoud Abbas “Abu Mazen”, so congratulation on your graduation and your success”. He added: “While celebrating your graduation today, I would love to send a message to every Palestinian to say that Palestine is for Palestinians only, and this occupation will end one day. They got our land armed by education, but now the Palestinian people are winning through the students of universities inside and outside the country as they are registering success all over the would”.

General Rjoub added: “The world is amused by what the Palestinians made, even under this occupation, they fight for their right and for their schools and education under all circumstances, and they stand raising their heads high”.

He also greeted the parents of the graduates who stood beside and behind the success of their children and fulfilled their needs to reach this stage of their lives, and said to the graduates: “you will now join the labor market to be part of developing Palestine, keep Palestine in your minds and hearts and don’t let the occupation change this. They have tries to take Palestine out of our hearts, but they were shocked when they found that after 70 years of occupation, each Palestinian home has a Palestinian flag in our hearts”.

Mr. Rjoub also praised the role of Arab American University to its students and to the local community and greeted the Palestinian Women who proved their selves in all fields and will always be responsible for rising this generation.

At the end of the ceremony, Dr. Moayad Abu Saa- the VP for the Academic Affairs, Prof. Mohammad Asia- the VP for the Medical Schools Affairs, General Akram Rjoub- the Governor of Jenin and members of the Deans Council honored the first of each faculty and then certificates were handed to the following graduates:

Faculty of Administrative and Financial Sciences 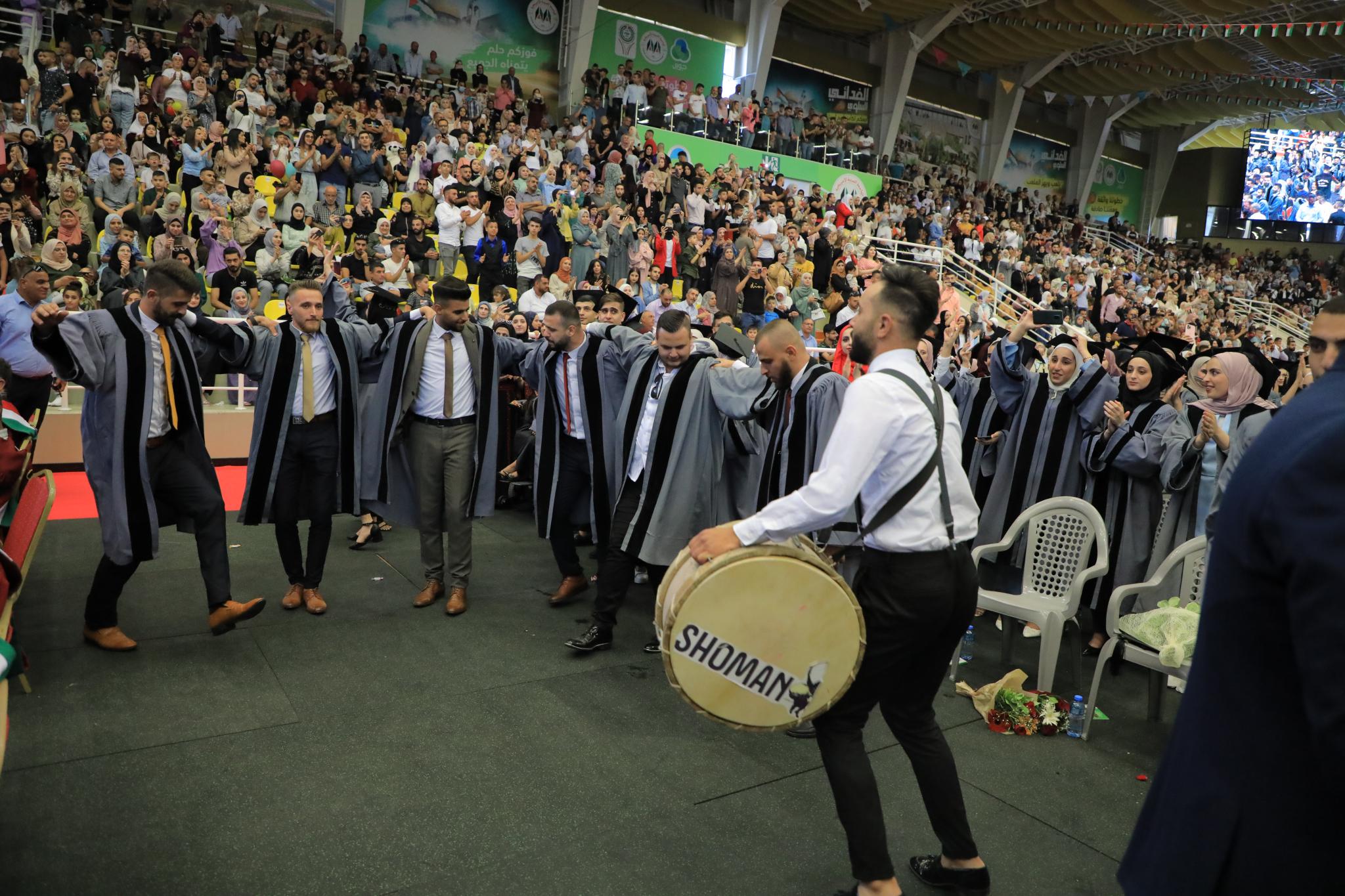 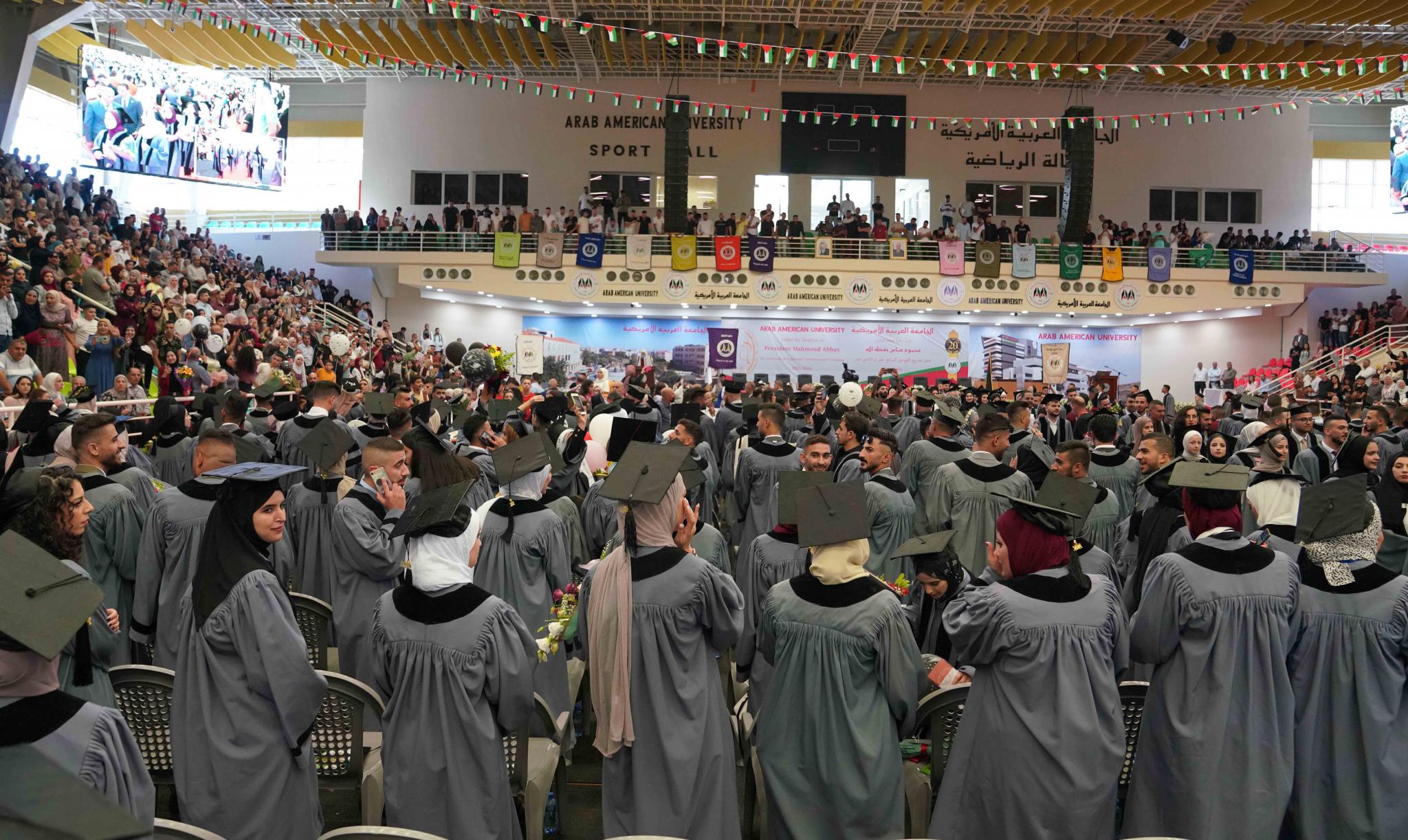 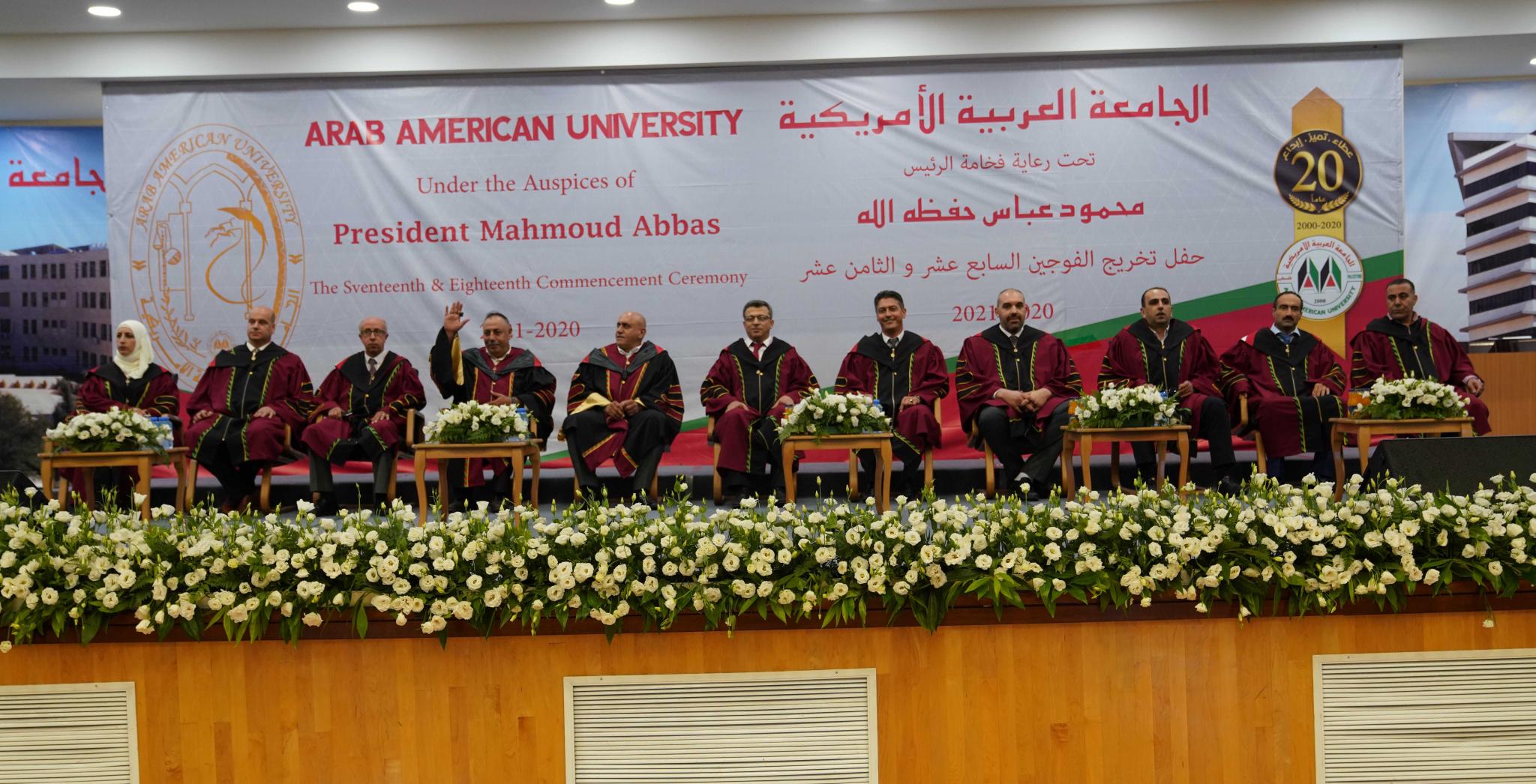 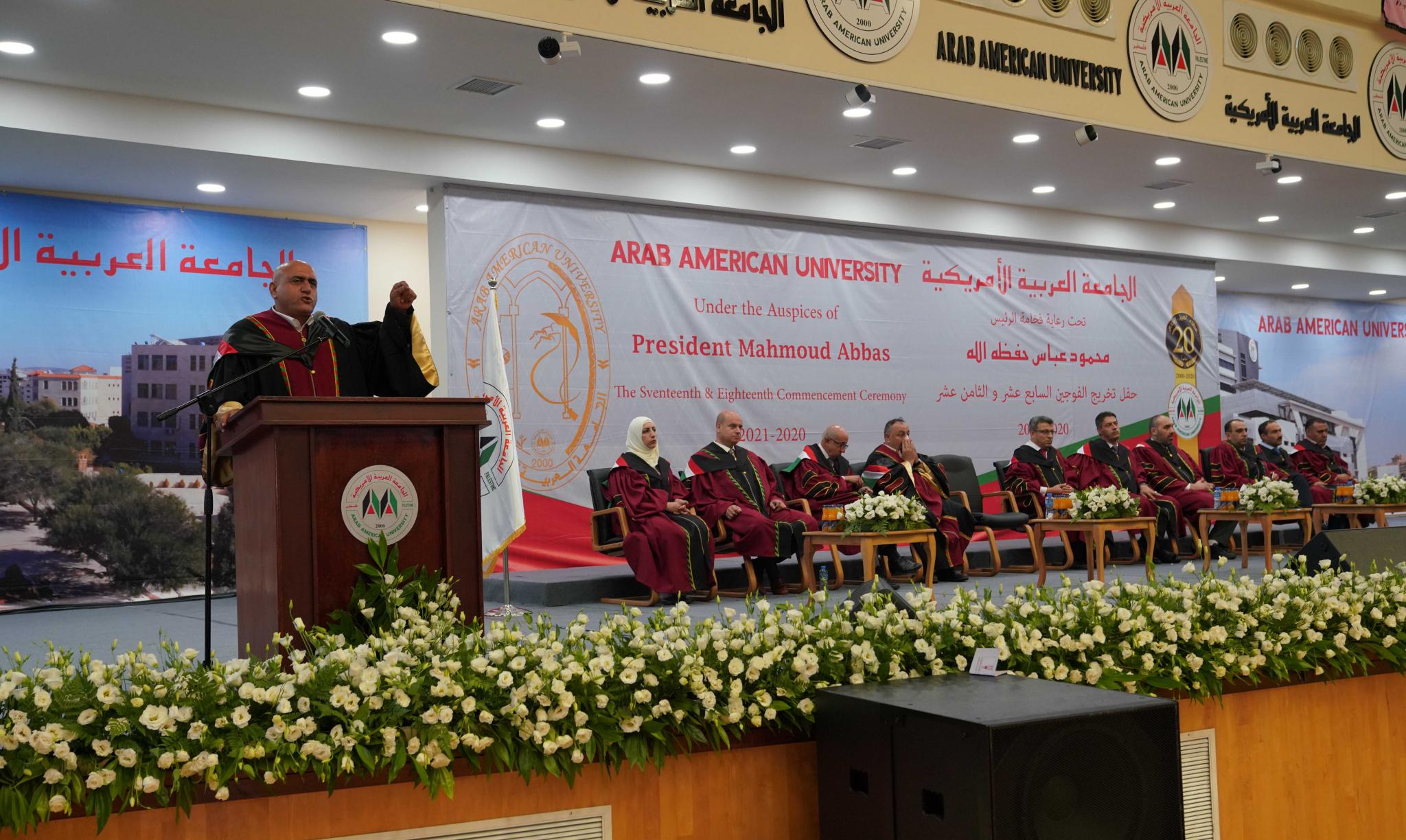 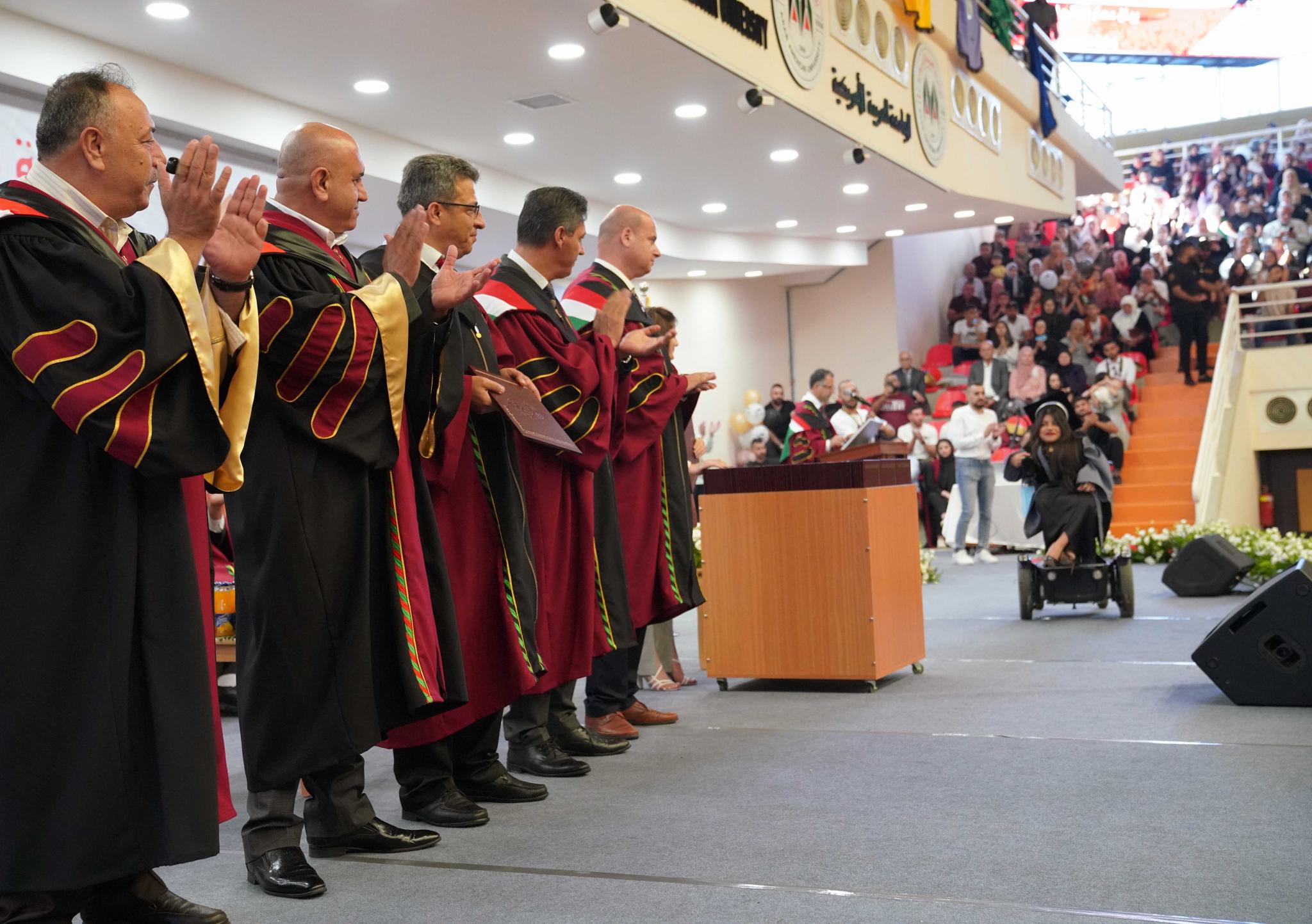 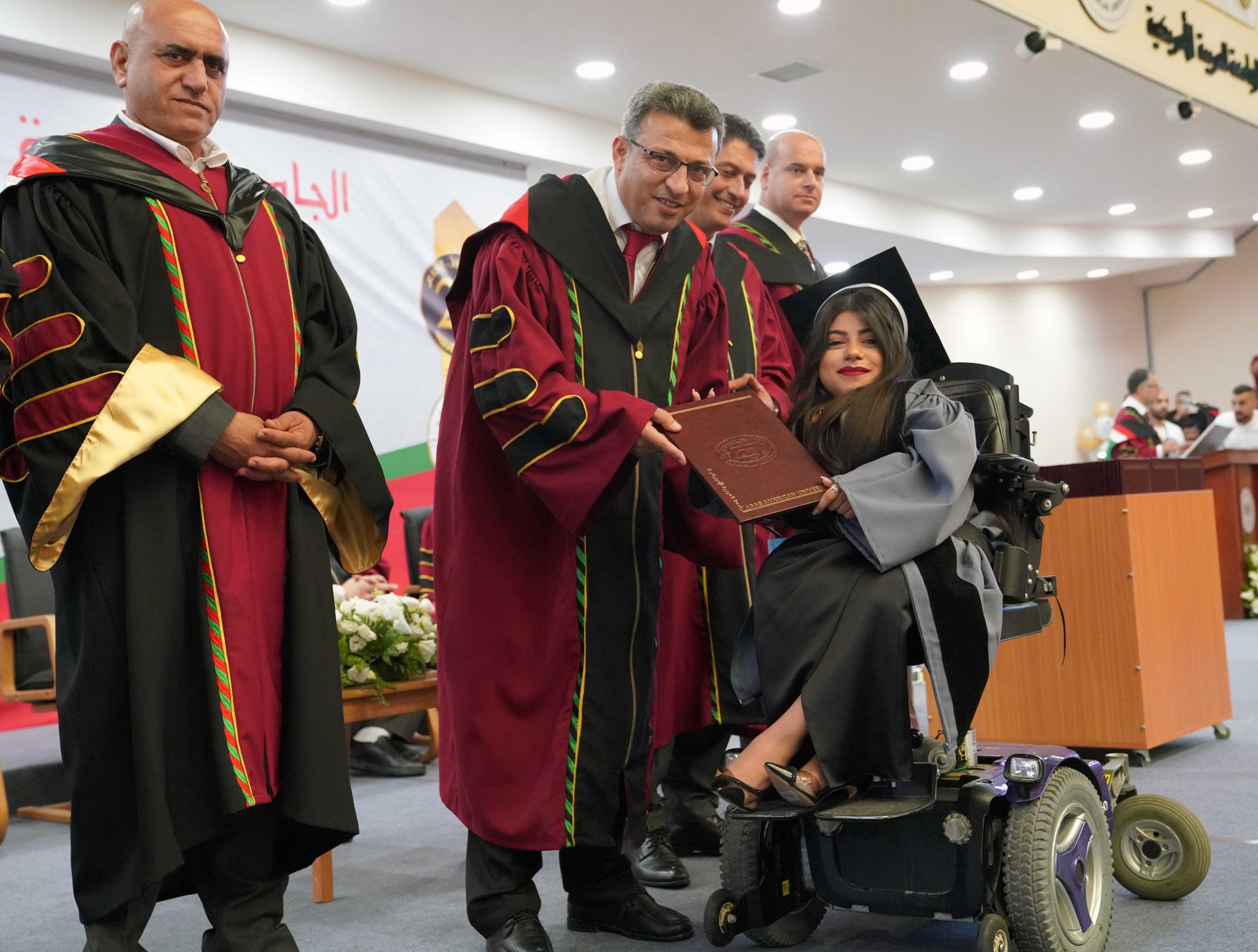 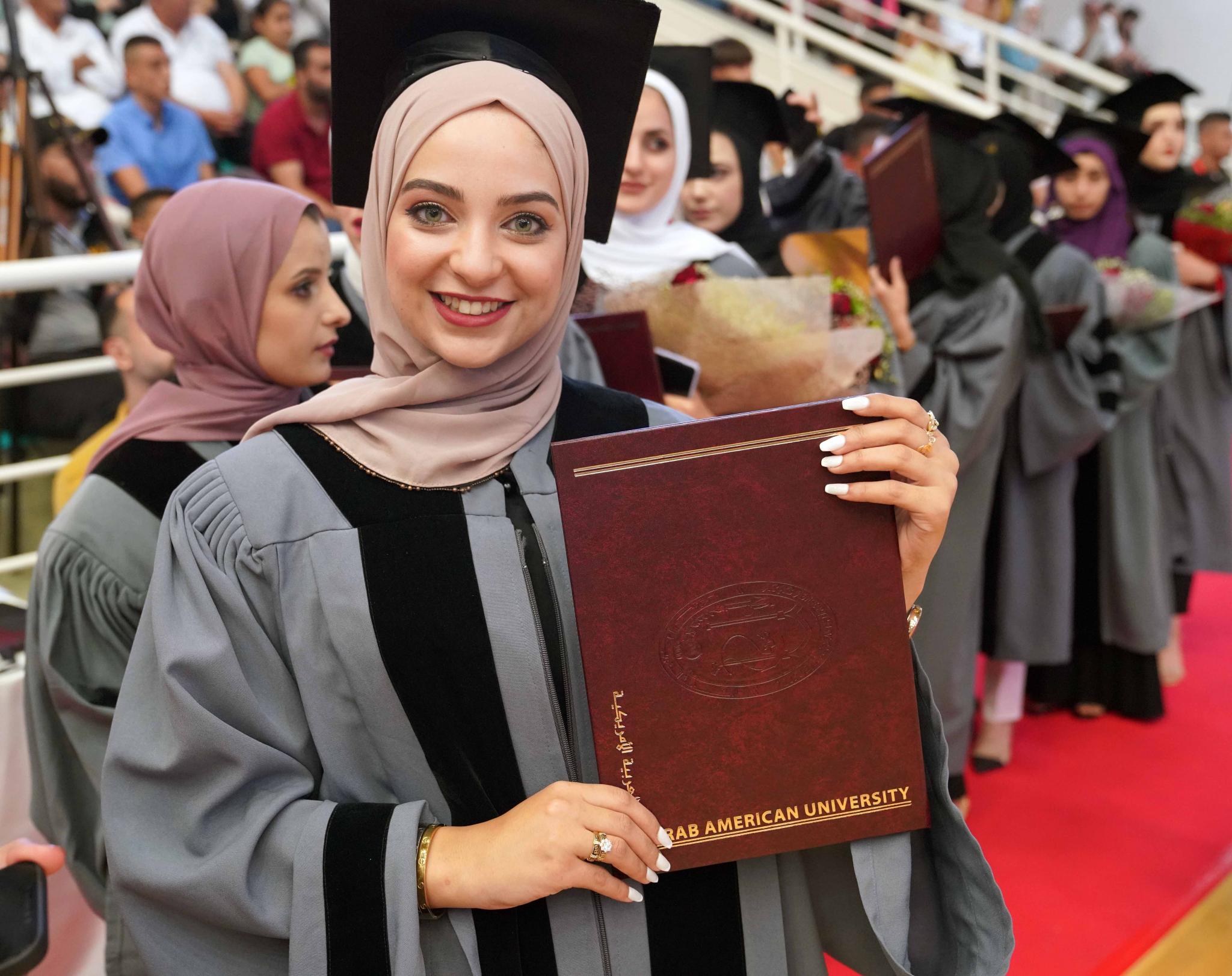 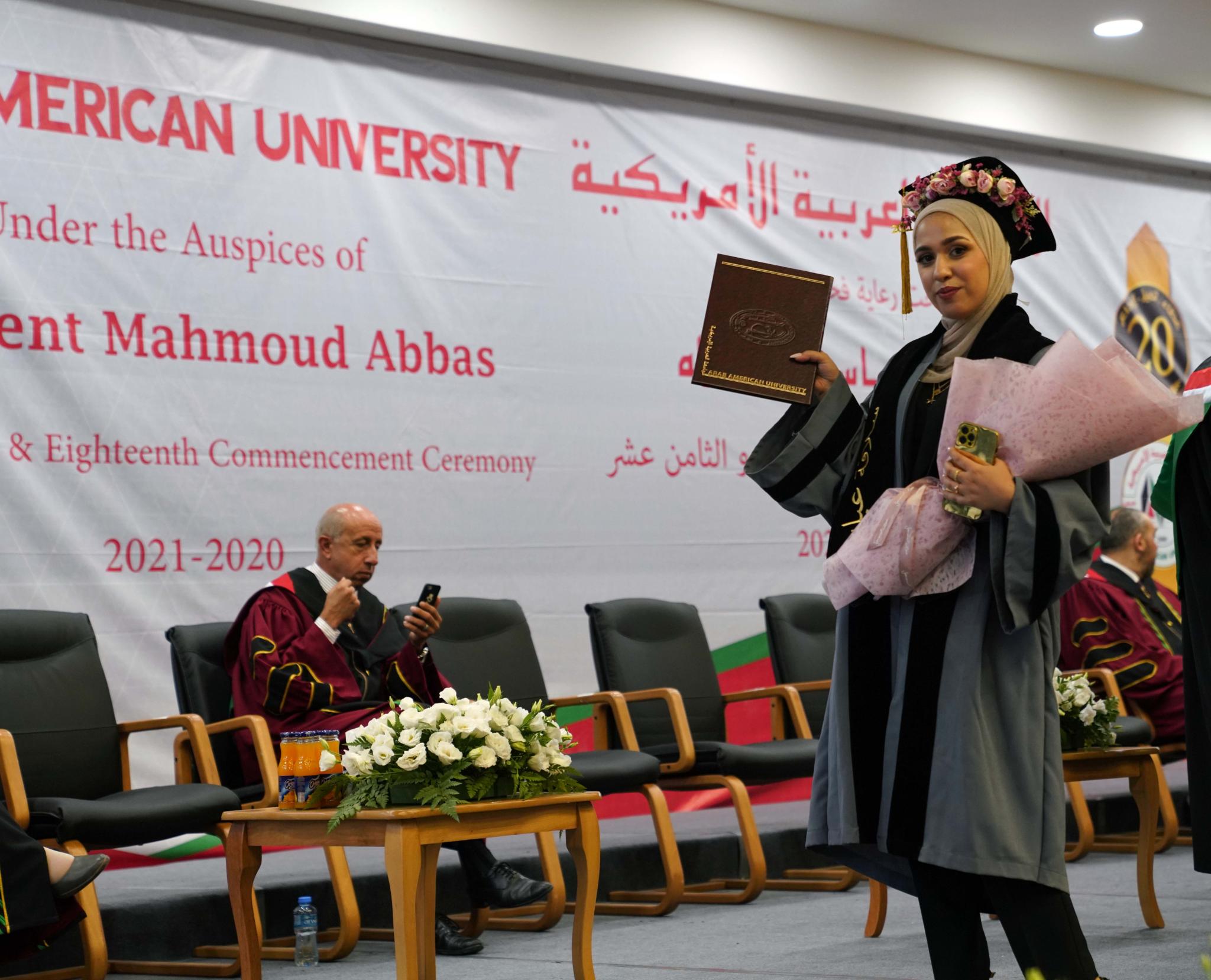 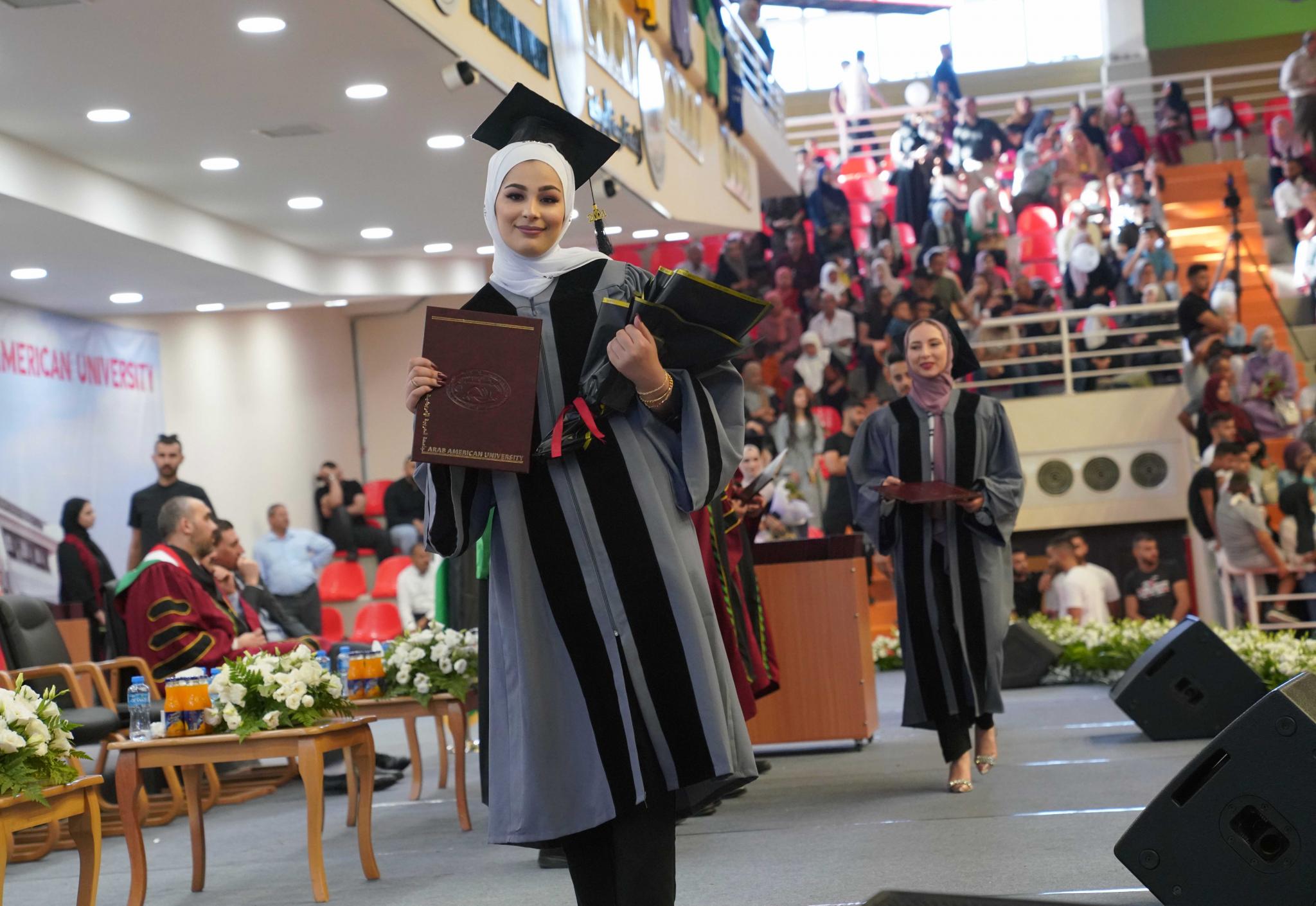 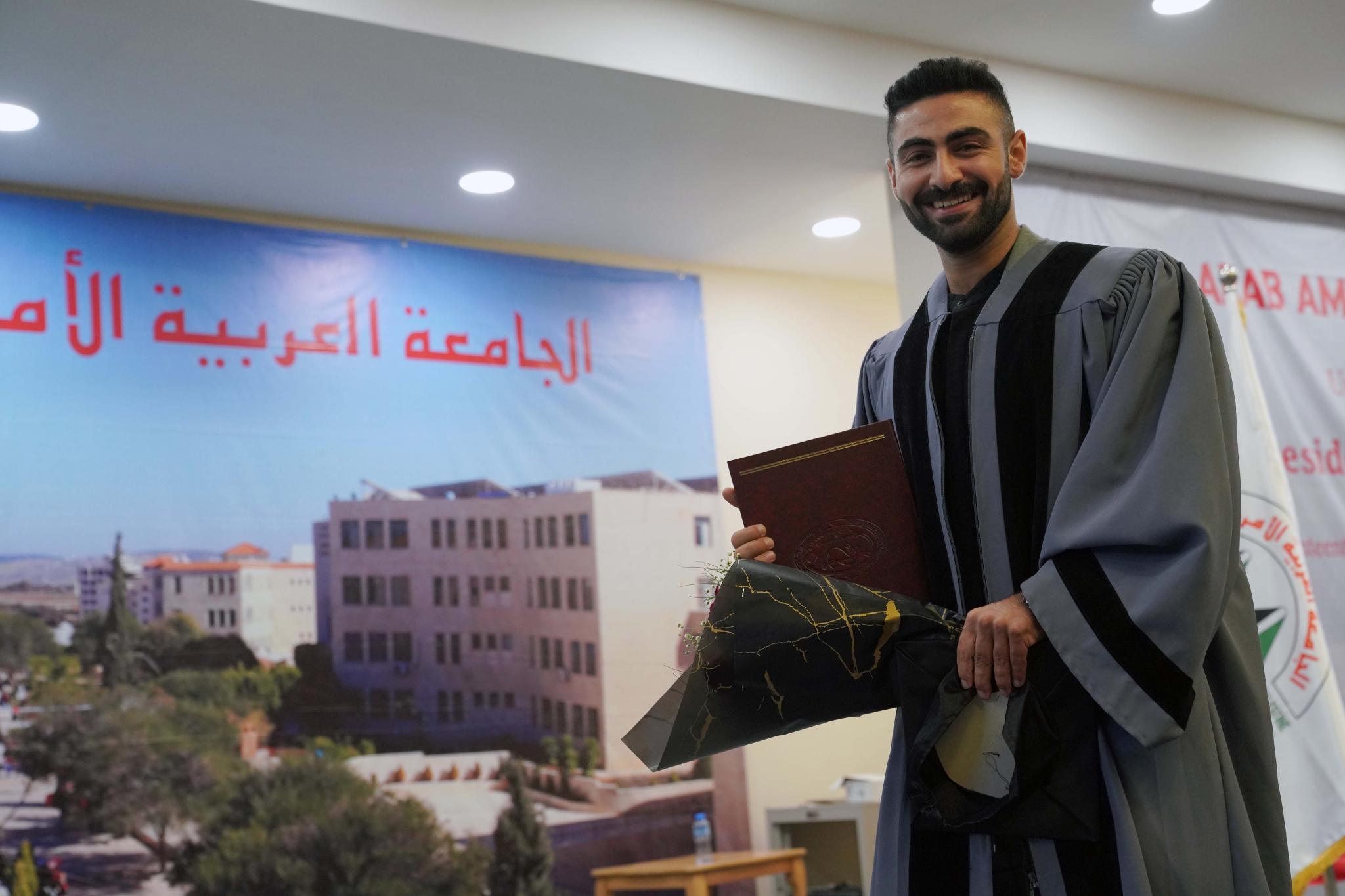 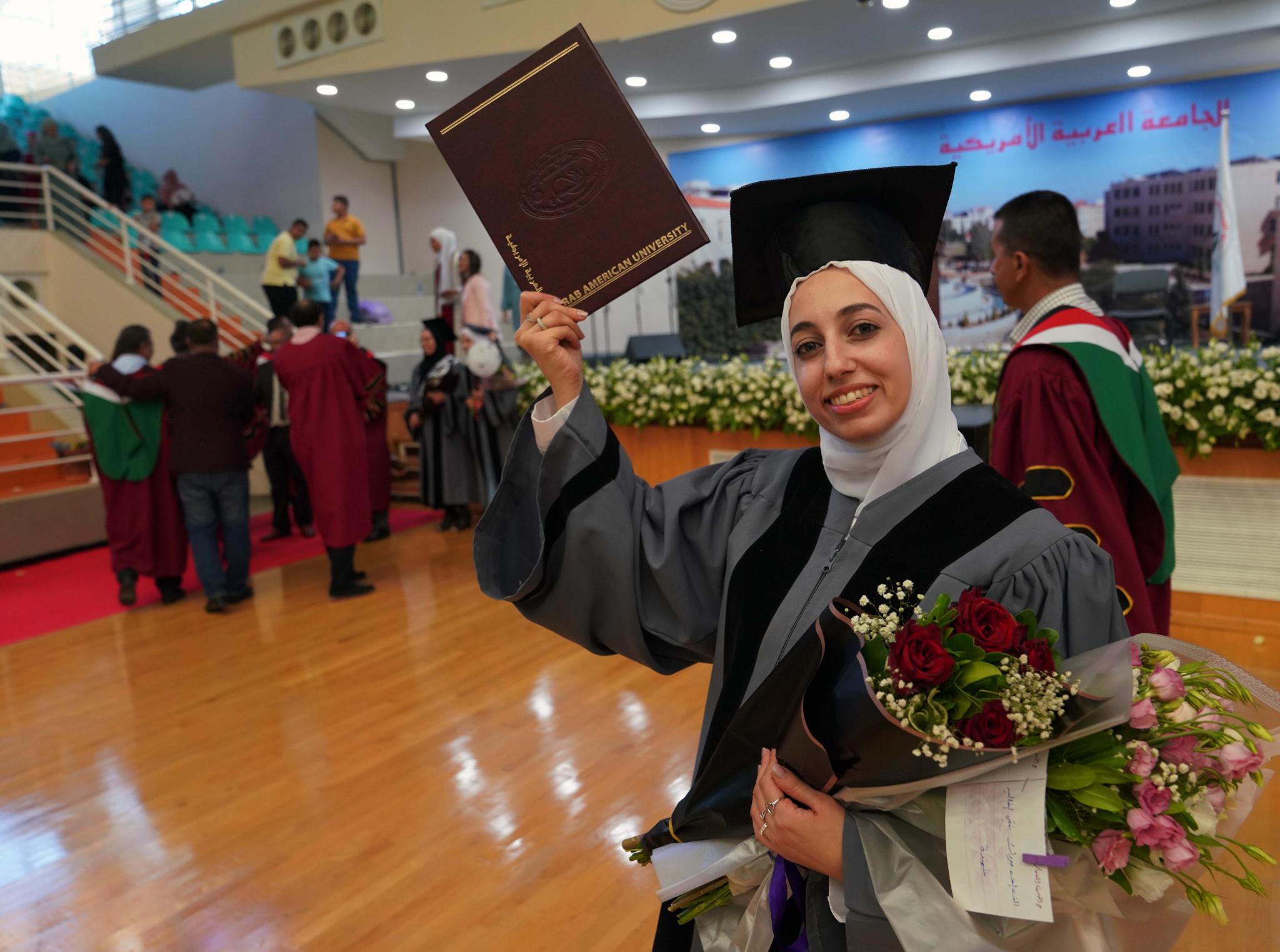 AAUP Celebrating the Graduation Ceremonies of its 17th and 18th Cohorts from the Faculties of Dentistry, Engineering and IT and Sciences
23 Aug 2021