Under the auspices of Major General Jibril Rajoub, and with collaboration between Arab Federation for Sports Culture and the Palestinian Olympic Committee, Arab American University hosted an online seminar through Zoom entitled “Sports Investment during and after Corona” 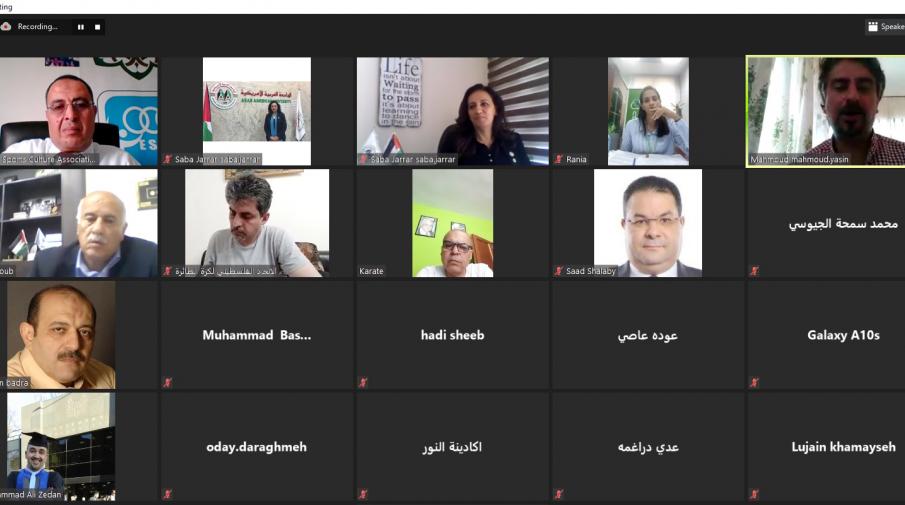 Prof. Sa’d Shalbi – the Sports Economics Professor in Mansoura University and the Adviser for President of Jeddah University and Al Ahli Club for Marketing, was part of this online seminar and talked about the basics of marketing and investment in the Arab World especially for the Palestinian case that he considered as a model for success due to the high use of technology in Palestine especially by the youth. Prof. Shalbi also asserted on the importance of the role of the Palestinian human being as an influence to the world and the regional area mainly because Palestinians have a rich possibility to invest in the national sports. He added that there will be new forms and shapes of e-marketing after corona.

Prof. Shalbi expressed his appreciation in participating in this seminar with such distinguish participants, adding that he participated in more than 400 Arabic and international seminars, but this was his first time to interact and talk with an intellect marketing minds with vision and skills that are capable of making a successful experience.

Dr. Mahmoud Yasin- the Head of the Marketing Department in AAUP talked about the vision about marketing in general, and about what can be applied to the Palestinian case in specific, especially when talking about the sports field, the privacy components of its marketing and the ways to develop them.

Ms. Rania Mare’e- the Director of the Marketing Communications Department in Jawwal talked about the company’s experience in supporting the national sports and the future support plans, especially on how to deal with the aftermath of corona and its effect on the fields and audience.

In her speech, Dr. Saba’ Jarrar – the Dean of the Faculty of Sports Sciences in Arab American University talked about the indicators about the changing in the marketing concepts and that this needs a change in our vision to the product and the consumers in the sports field. She talked about how it is important to focus on the interaction between audience and the sport event after the audience moved from being present in the field to watching from their homes. Also Dr. Jarrar talked about the media role and how to be effective in sports.

General Jibril Rajoub- the Head of the Council for Sport and Youth Affairs and the Head of the Palestinian Olympic Committee concluded the seminar as he talked about the national strategy for the Palestinian sports in the coming five years. He added that the most important future plan to be invested in sports is to try to break all barriers and let all the Arab teams enter Palestine and play in our fields.

General Rajoub also thanked all the speakers, and appreciated the role that Arab American University take in hosting such seminars. He asserted on the importance of keeping in organizing supportive seminars that support the clubs and federations in all fields in order to raise awareness to the national sports between all people.

This seminar was directed and moderated by Mr. Ashraf Mahmoud- the President of the Arab Federation for Sports Culture and a writer in Al Ahram, who expressed his happiness that the first activity of the federation started in Palestine under cooperation with a great edifice like AAUP. He said that he visited Arab American University in Ramallah last year and that he got the federation’s acceptance to support the activities of the university in order to develop sports in Palestine through the Faculty of Sports Sciences in AAUP and the Palestinian Olympic Committee. And during the seminar, many other representatives of the federation participated in meaningful and important interactive speeches.