Under the auspices of Professor Ali Zeidan Abu Zuhri- the University president, Arab American University organized a scientific day about Geographic Information System (GIS) under the name: “Smart Solutions Using Geographic Information System”. Activities of this scientific day included a conference, a fair for the students’ projects and finally presentations for some research papers of this field’s experts. 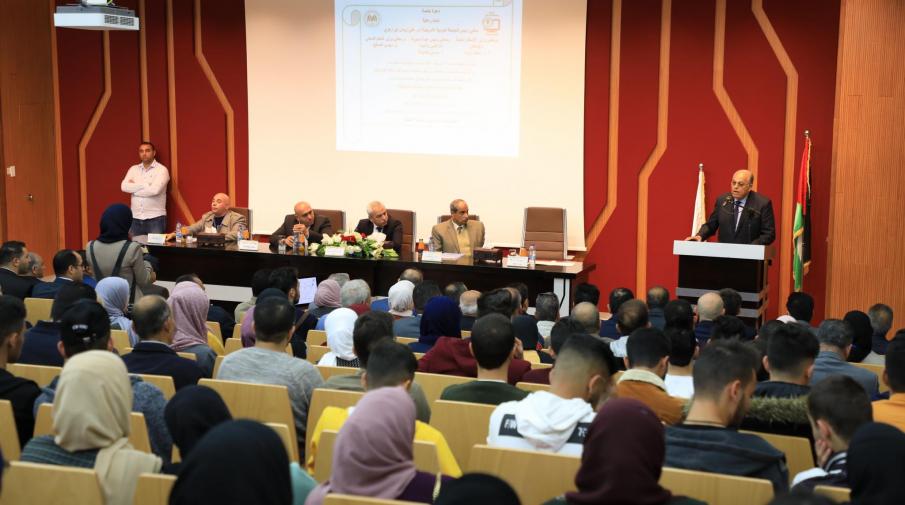 The opening of the conference

The activities started by the opening ceremony that was attended by Prof. Ali Zeidan Abu Zuhri- AAUP President, Prof Mohammad Zeyara- the Minister of Public Works and Housing, judge Mousa Shakarneh- the Minister of Land and Water Settlement Commission, Mr. Akram Rjoub- Jenin Governor, Mr. Ragheb Abu Diak- the Director General of the Ministry of Local Government of the Jenin governorate, representing the Minister of Local Government, Dr. Mujahid Olayyat – the Dean of the Faculty of Engineering and Information Technology, Dr. Jacquleen Joubran- the Chair of the GIS Department, along with other representatives of local bodies and municipalities in the West Bank, some experts in the GIS sector, academic and administrative members and students. The ceremony master Dr. Faisal Sabbah welcomed the guests and started the ceremony by asking them to stand for the national anthem, then listening to some verses of the holy Quraan, and announcing solidarity with journalist Muath Amarneh by covering their left eyes.

Prof. Ali Zeidan Abu Zuhri – the President started the ceremony by welcoming guests and said: “I welcome you today at the main campus of Arab American University to be part of the 4th annual GIS day that is organized by the Faculty of engineering and Information Technology.” Prof. AbuZuhri added “AAUP always sought to develop its educational programs aiming to improve the educational outputs for students in accordance with local, regional and international quality, standards and excellence, hence, AAUP started the GIS program in 2014 to compile the regional and international programs and needs.”

Prof. Abu Zuhri continued: “Celebrating this day comes from the interest of the university in one of the important modern sciences that corresponds to the professional reality of this world and its needs. This specialization has a great role in the developing of humanitarian communities, as it teaches students how they smartly manage their community, and how to make the right planning to come up with the best decisions supported by information, in order to lead the community into a better future and get services and complete transactions easily.”

Additionally, Prof. Ali Zeidan indicated that AAUP represents a new qualitative scientific and research project from one side, and a patriotic project from the other side, as AAUP accepts Palestinian students from all over Palestine. AAUP proudly announces that Palestinians of the lands of 1948 represent over 50% of its students, and that is where the slogan “A University for all Palestinians” came from. Prof. Abu Zuhri also clarified that the university hopes that the activities in this day will be a motivation for the national planning work that must be encouraged to concentrate more on the GIS specialization, especially because it is needed in the local institutions, the governmental institutions, municipalities and local communities, hoping that it will be a great success.

Mr. Akram Rjoub- Jenin’s governor appreciated the role that AAUP does and the scientific activities that it organizes asserting that AAUP is a distinguish educational edifice. He emphasized on the importance of scientific researches, education and knowledge and considered that those are the foundations to building an independent Palestinian state. He added that politician, patriot, scientist and academic leaders and decision makers all assert on the importance of education and knowledge especially on the GIS sector that is the main component in the thinking and planning processes. Mr. Rjoub also assured on the importance of enhancing the importance of this specialization in our students, hoping that this conference will result in significant recommendations asking decision makers to take these recommendations seriously into action.

The Minister of Public Works and Housing

The Minister of Public Works and Housing, Prof. Mohammad Zeyara said “we are witnessing a rapid developing in the Geographic Information System and the technology revolution. Currently, spatial geography is considered to be a great concern for decision makers in the governments, in businesses and in the private sector.” Prof. Zeyara indicated that there is a huge leap in using GIS all over the world that resulted from the development of mobile phone devices and the increase relay on the services of the spatial geography. He added that this development will lead to a need that every person should be directly connected to spatial information in all aspects of life.

Prof. Zeyara clarified that the ministry has a great role in this aspect as it used this technique in managing the infrastructure sector. Since 2000, new database for road network was developed. This database included all details of every road, and this helped in managing the maintenance operations in the country. The database also included the black spots that accidents repeatedly happen in, and this helped in putting the appropriate engineering solutions to reduce these accidents. Moreover, the database included the building projects and housing that the ministry supervised over and implemented, asserting that those databases are regularly updated and available for everyone.

The Minister assured that developing the GIS is a challenge that needs a lot of professional competencies. This will activate the governmental and community roles according to a comprehensive vision that corresponds to the future development. Prof. Zeyara also asserts on the importance of getting advantage of the GIS and the smart solutions especially in implementing the government’s strategy to get rid of the occupation’s domination.

The Minister of Land and Water Settlement Commission

Judge Mousa Shakarneh, the Minister of Land and Water Settlement Commission from his side emphasized on the importance of the geographic information system (GIS) for both the governmental and private sectors. He clarified that the Land and Water Settlement Commission pays great attention to this specialization, as they employed specialized experts in this department and it became an important department in the ministry and he assured on the importance of its continuous development.

Judge Shakarneh added: “the sector helps in archiving, numbering and making future research studies, and we need cooperation between the government and private sectors” assuring that the country will not develop unless such cooperation happens between both sectors. Moreover, he announced about a signed agreement between the commission and AAUP asserting that the commission will make its services available for the students of AAUP and its graduates, in addition to support the scientific research to help this science reach to its best image.

The Ministry of Local Government

Mr. Ragheb Abu Diak- the Director General of the Ministry of Local Government of the Jenin governorate, representing the Minister of Local Government said: “In our ministry we have followed the development in this world and we became part of it. Our ministry owns the jimmork system that contributed largely on shortening time for work done with more accurate information. He emphasized on the importance of the cooperation between the government and private institutions in order to destroy any obstacles on the way off the GIS development, especially that occupation is trying to put any kind of obstacles in front of the development of the Palestinian people and in its institutions. Mr. Abu Diak appreciated Arab American University for organizing such an important conference.

From her side Dr. Jacquleen Joubran- the Chair of the GIS Department appreciated the administration of the university on its continuous support. She especially thanked everyone who contributed in the success of this conference asserting that the GIS department will continue to make activities and organize conferences that will help in developing this specialization.

The first session was directed by Mr. Jehad Rabaaya. Engineer Salameh Awawdeh from Access Company was first to present a research paper entitled “Area Solutions for Geographic Information System”. Then Dr. Suhail AbuShosheh- Dean of the Faculty of Humanitarian Sciences in Al Isteqlal University talked about the enrollment of a lecturer in the security Geographic Information System. Engineer Jamal Zeitawi from the Ministry of Local Government presented a paper entitled “Using Spatial GIS to Manage the Supreme Organizing Council Business”. Both Dr. Subhi Samhan and Mr. Ashraf Dwaikat from the Water Authority presented a research paper about “The Best Use for GIS to Follow up Water Resources in Palestine from the Information Bank”. And finally, the lecturer from An Najjah National University Dr. Dergham Ishtayyeh presented his paper about “Choosing the Best Locations for Landfills in the West Bank Using GIS”.

The second session was directed by Ms. Aseel Kmail, where Ms. Muna Be’raat- the GIS department manager in the Land and Water Settlement Commission started the session by talking about the experiment of the body in using GIS to make decisions and give smart solutions. Then Engineer Atta AlZaatary- from the Ministry of Public Works and Housing explained the work of the ministry in the GIS and using the ministry’s website for GIS in the field survey. From his side, Mr. Mohammad Olayyat- Arab American University talked about using spatial exploration theories application to predict the effect of the weather. Moreover, both Dr. Faisal Sabbah and Mr. Alaa Salameh from AAUP explained the uses of GIS in Climatology. And finally, the session was closed by the speech of Omar AbuBaker- GIS graduate, who talked about his work experience in Land and Water Settlement Commission.

The activities of this day included a fair where students of the GIS department presented their projects and explained them to the guests who appreciated their hard work. 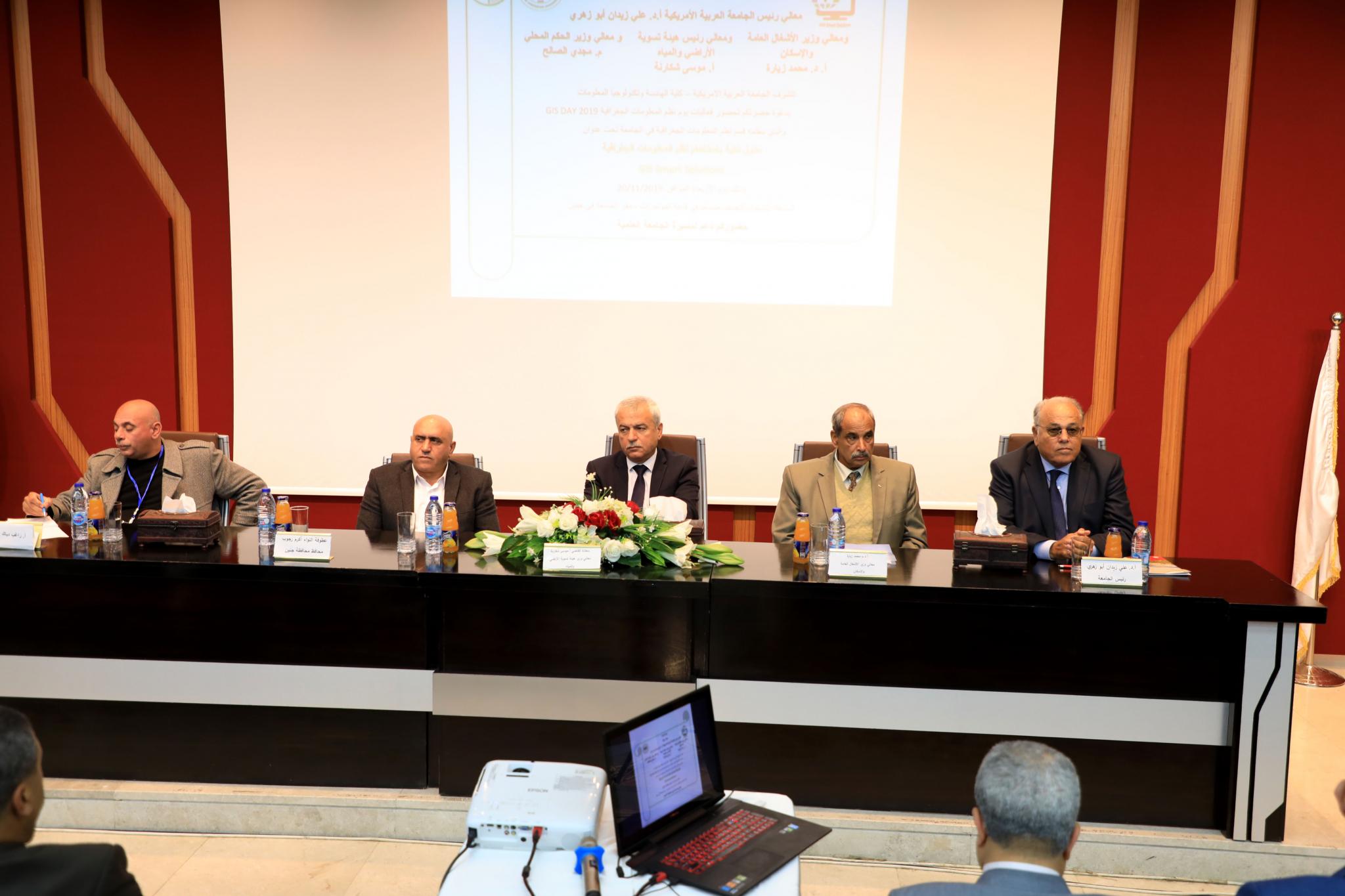 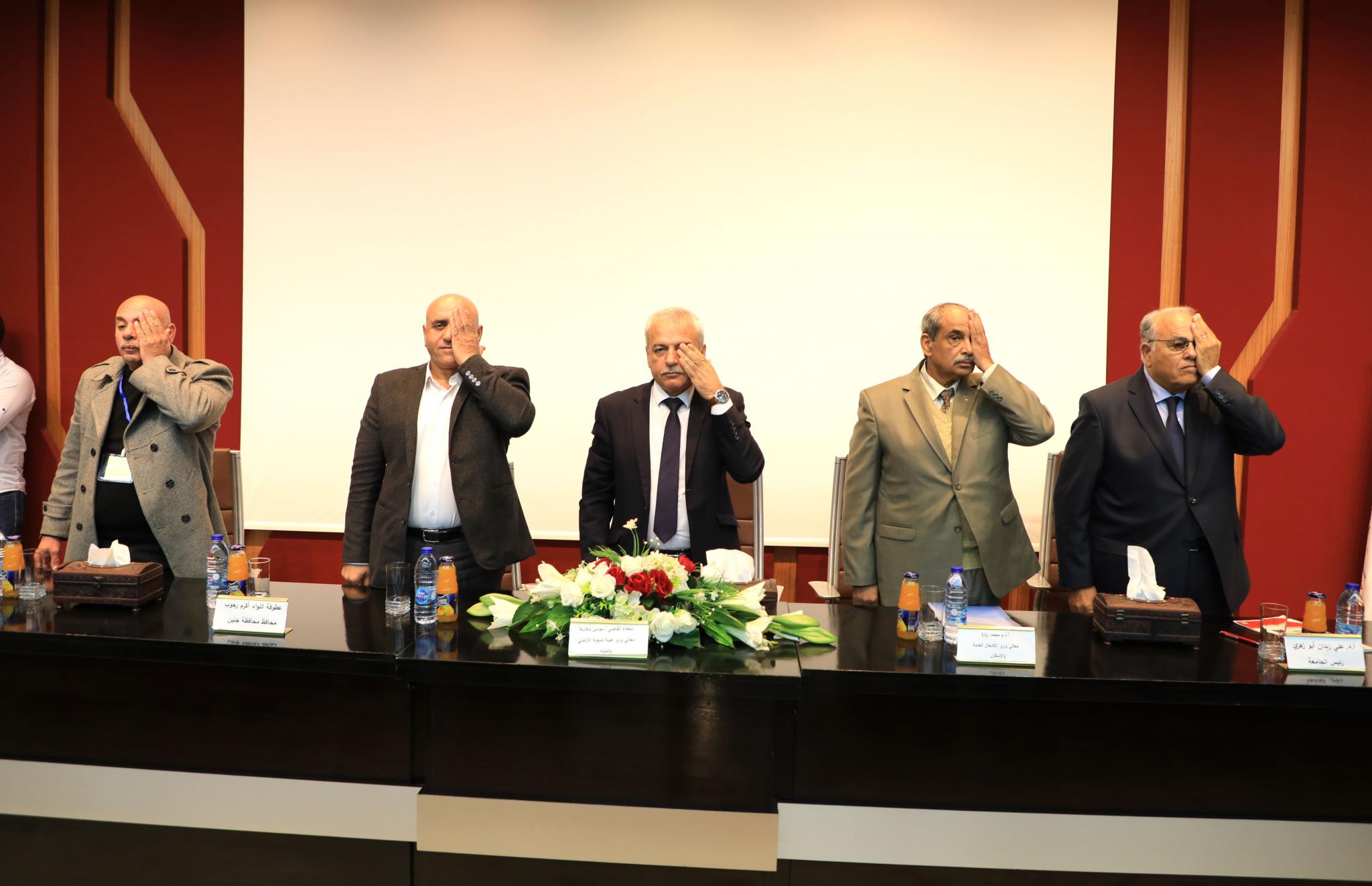 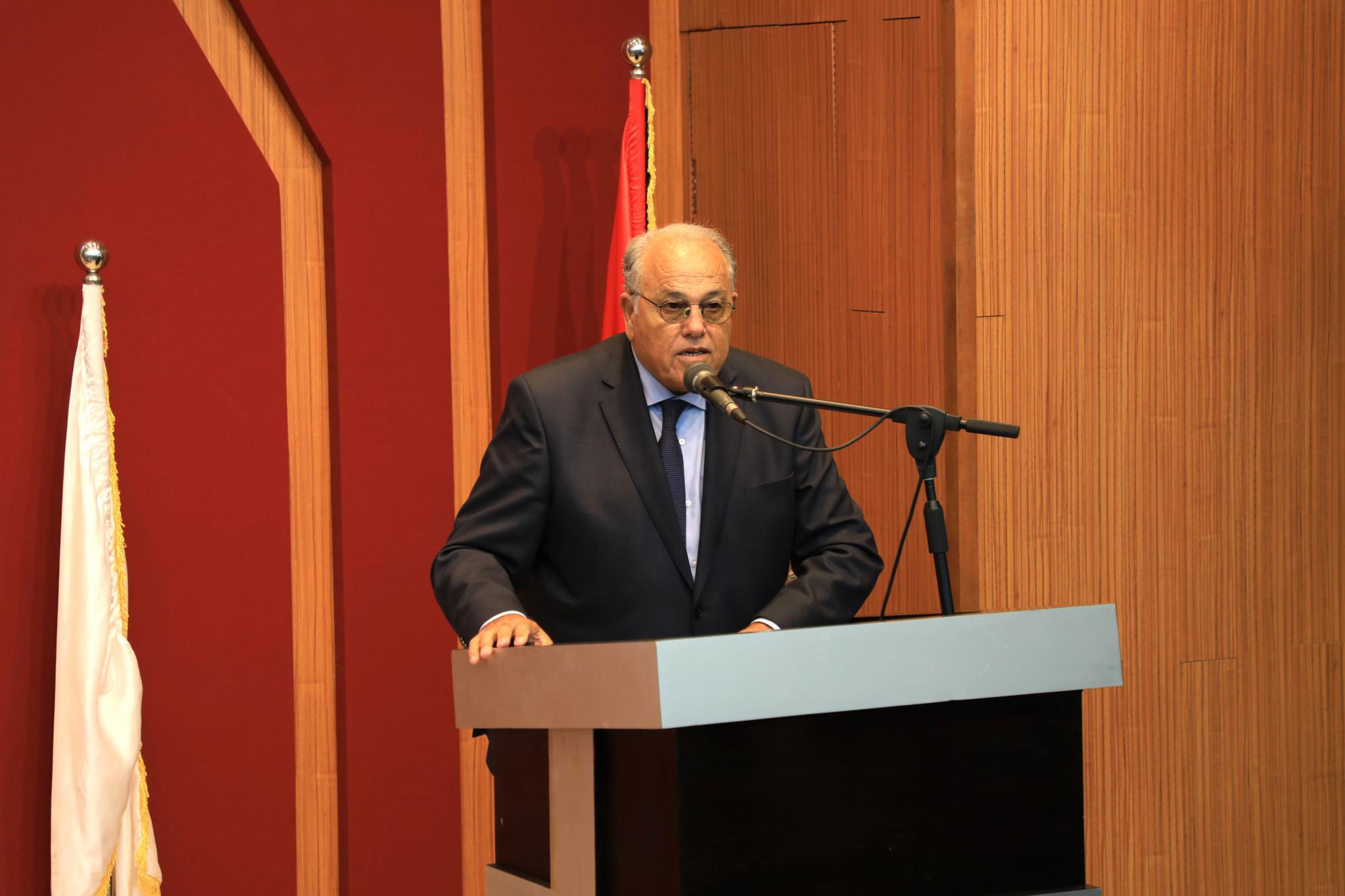 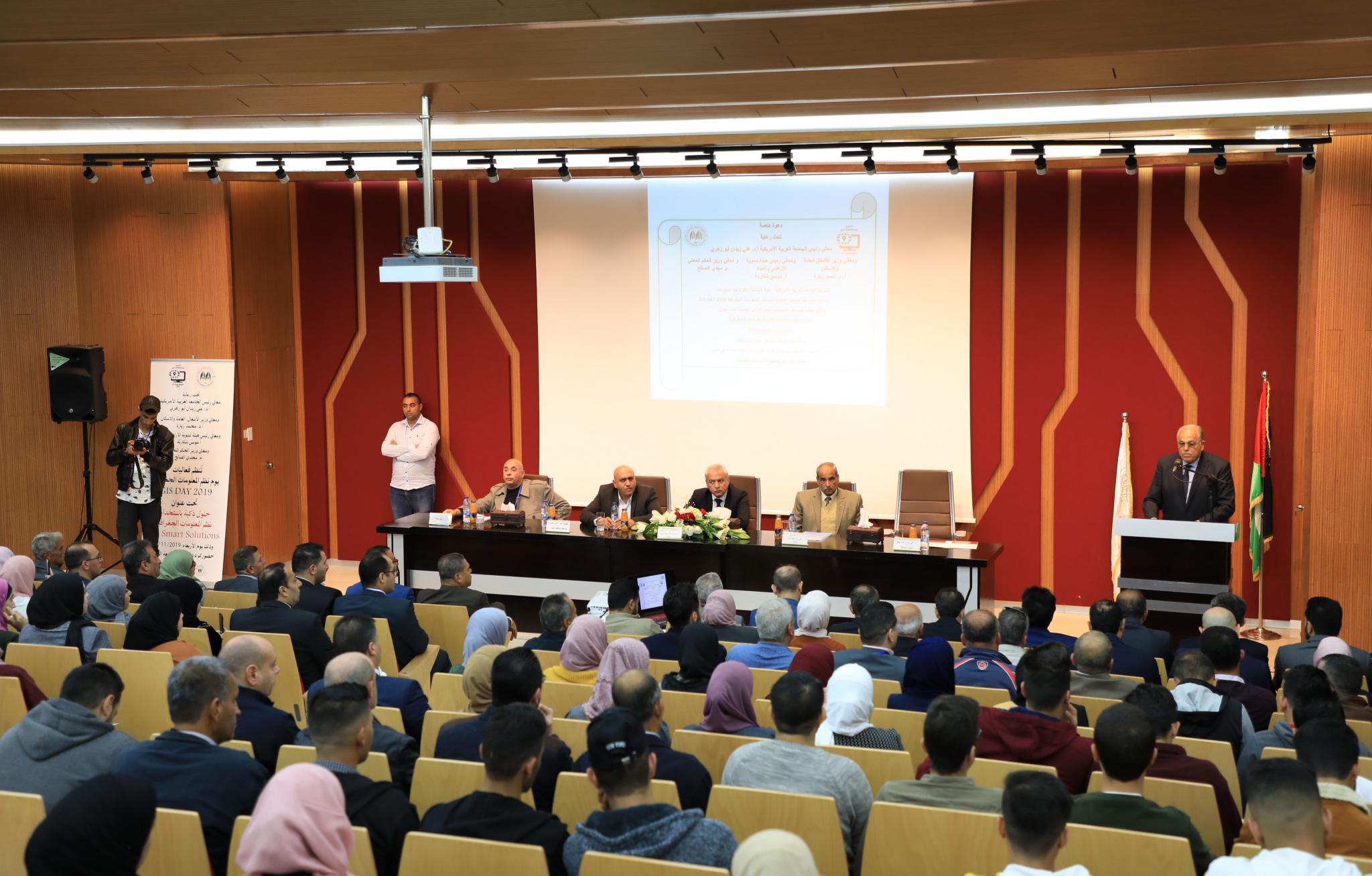 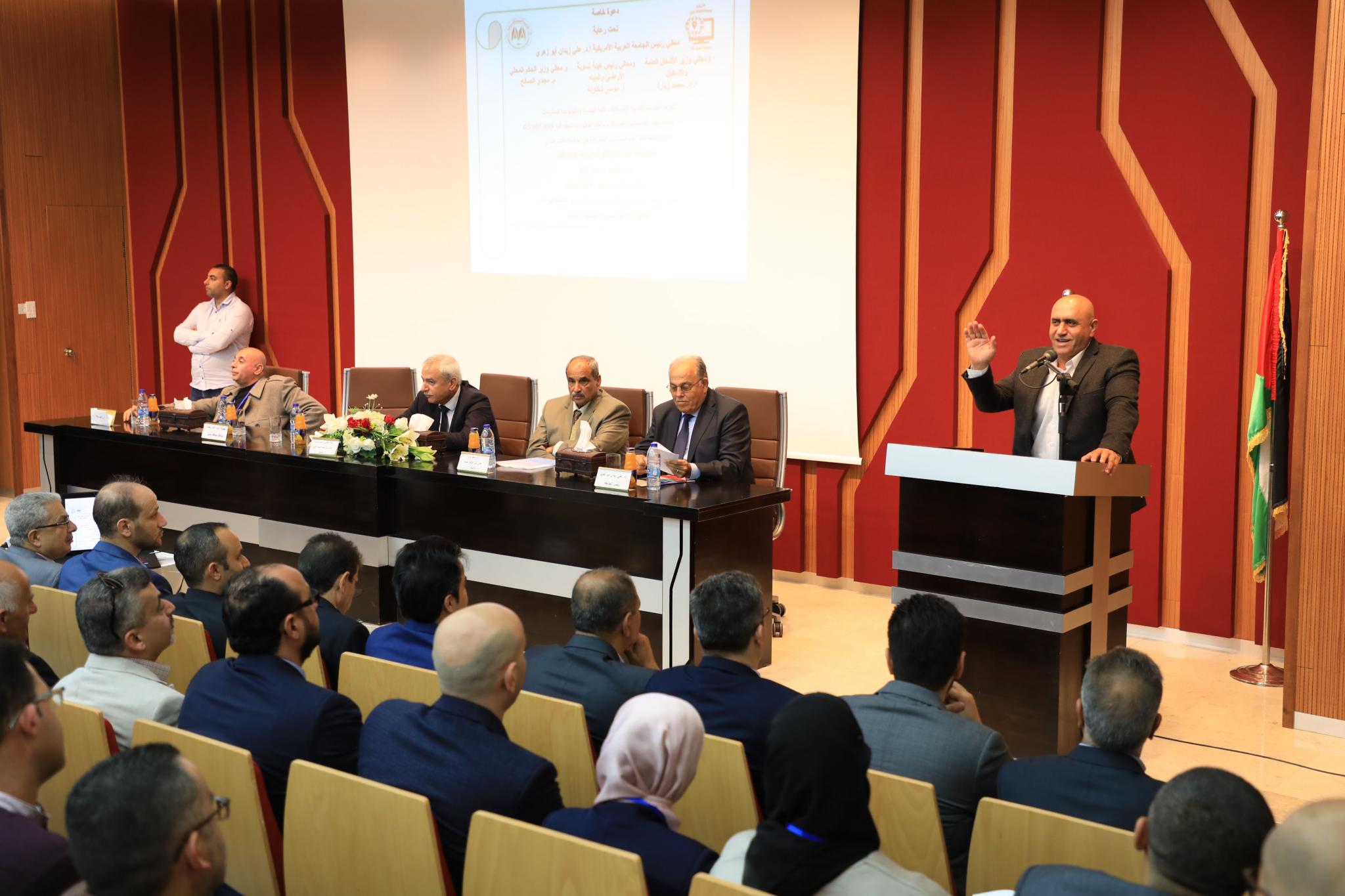 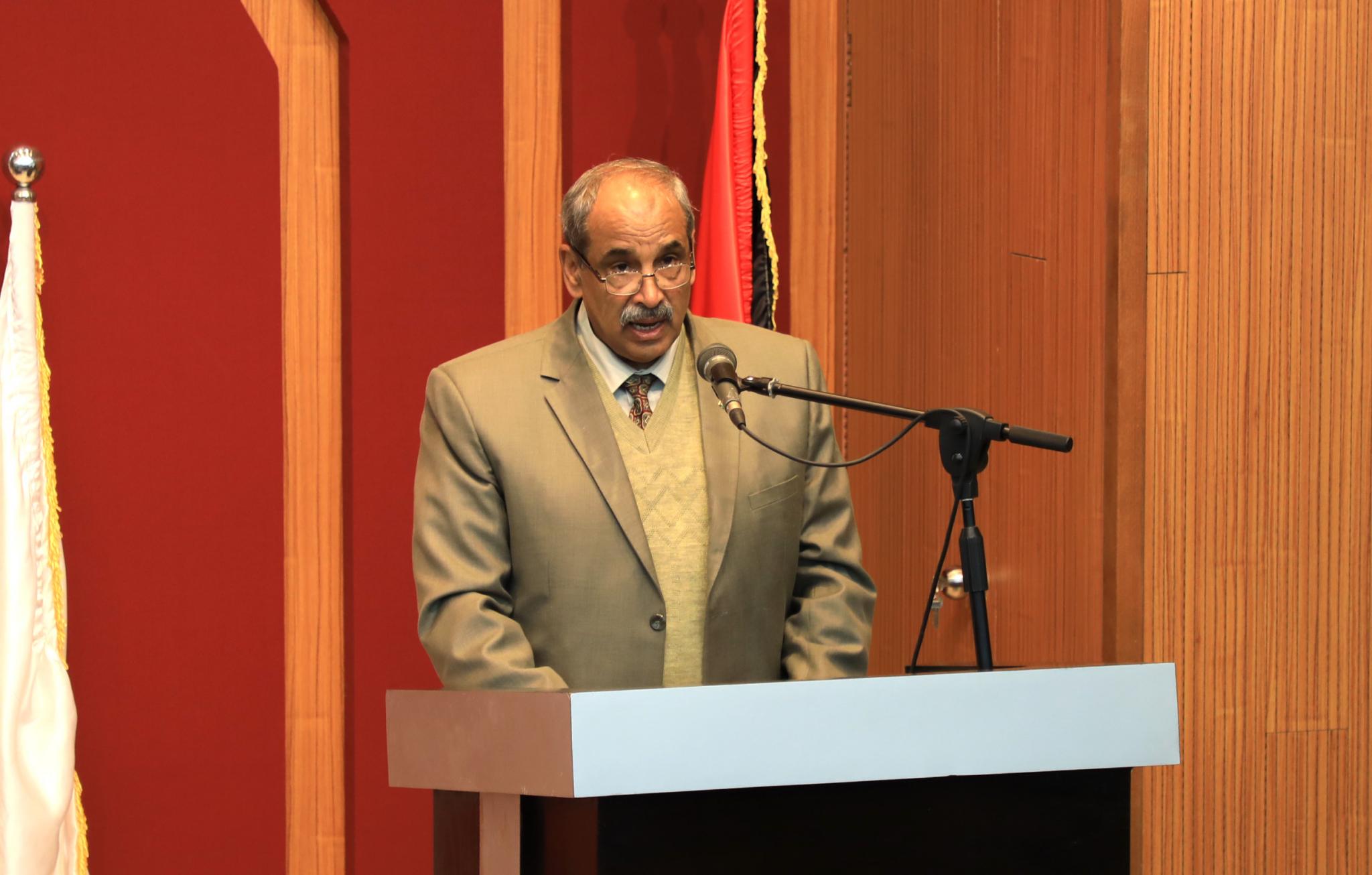 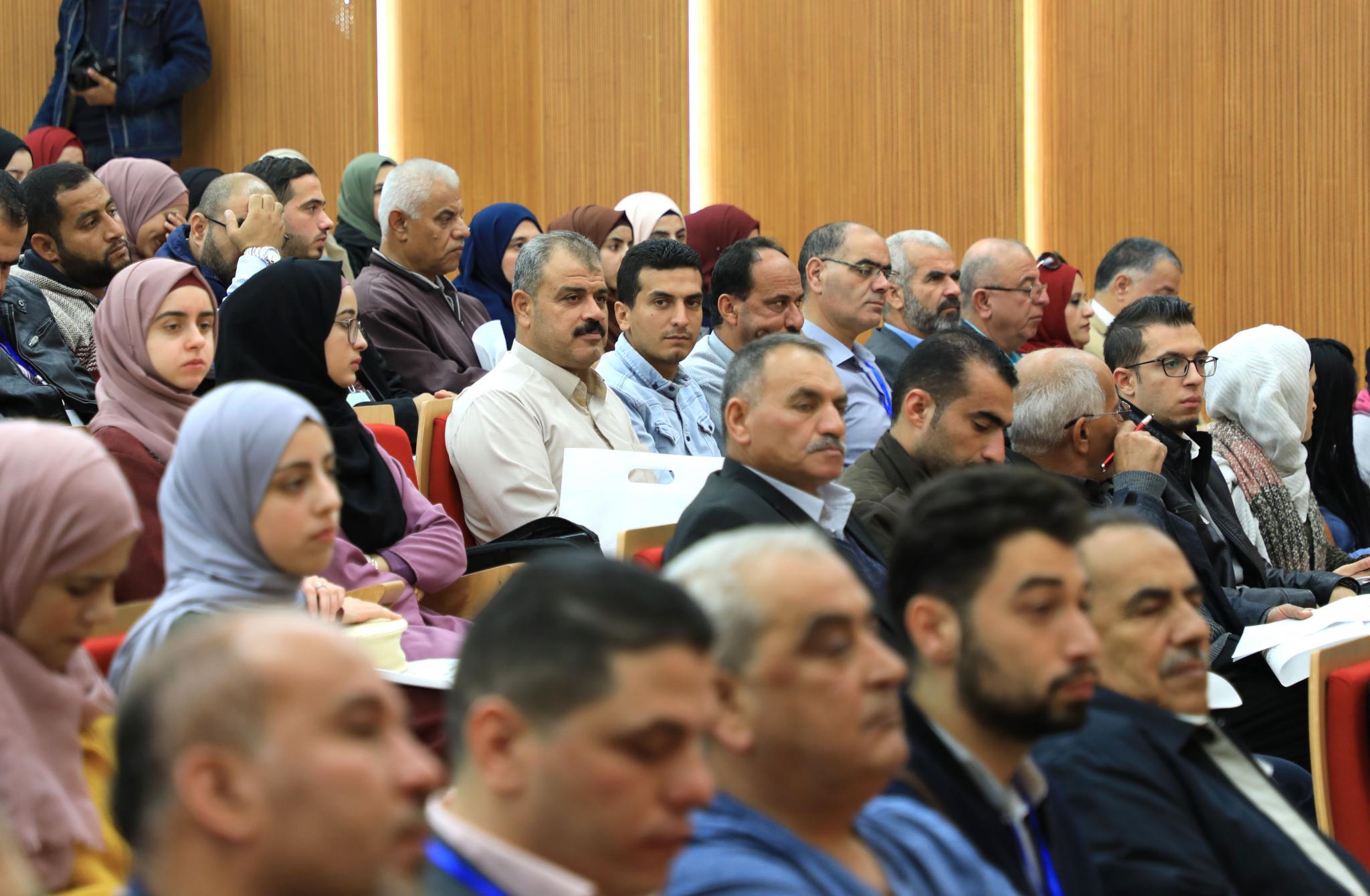 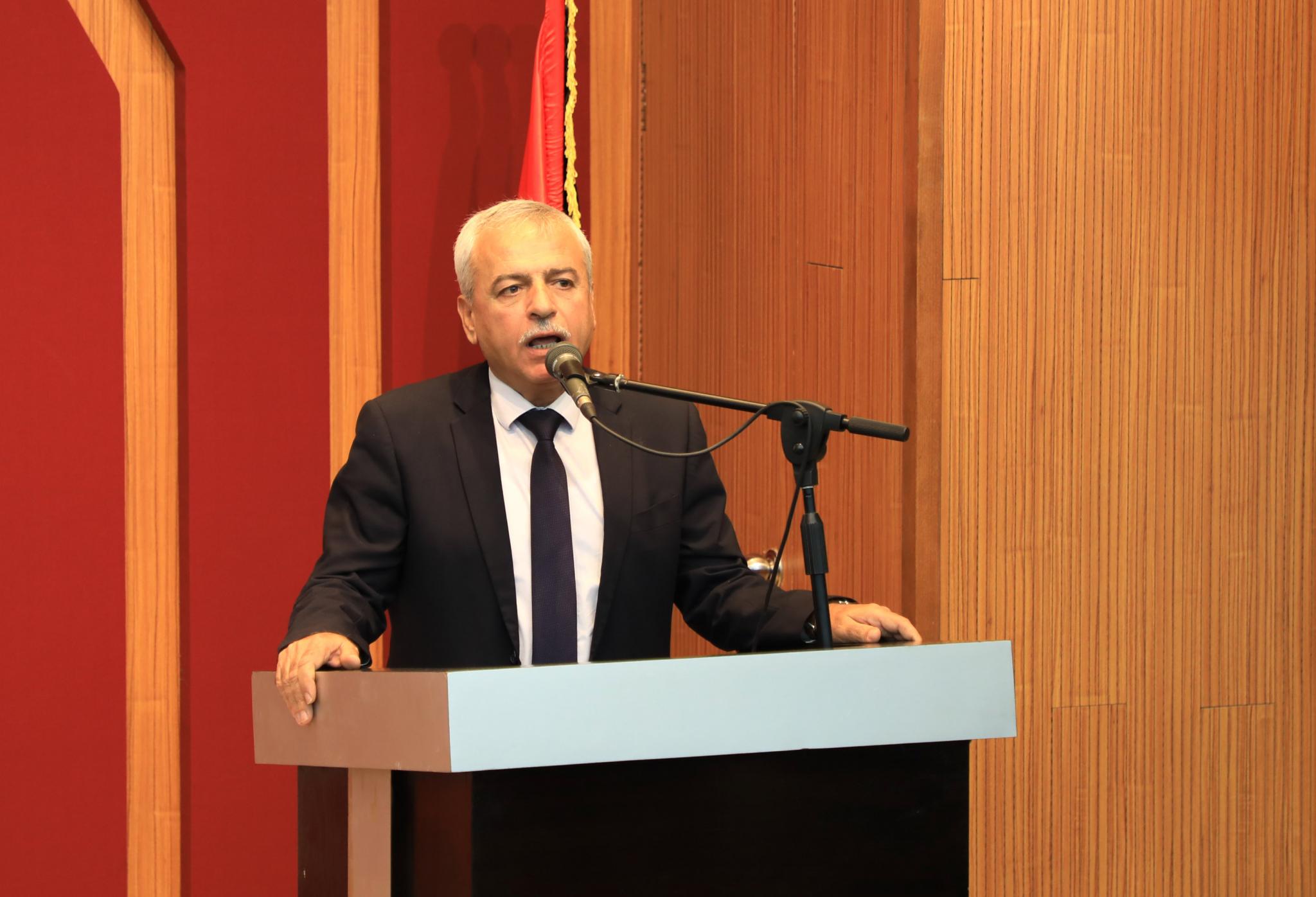 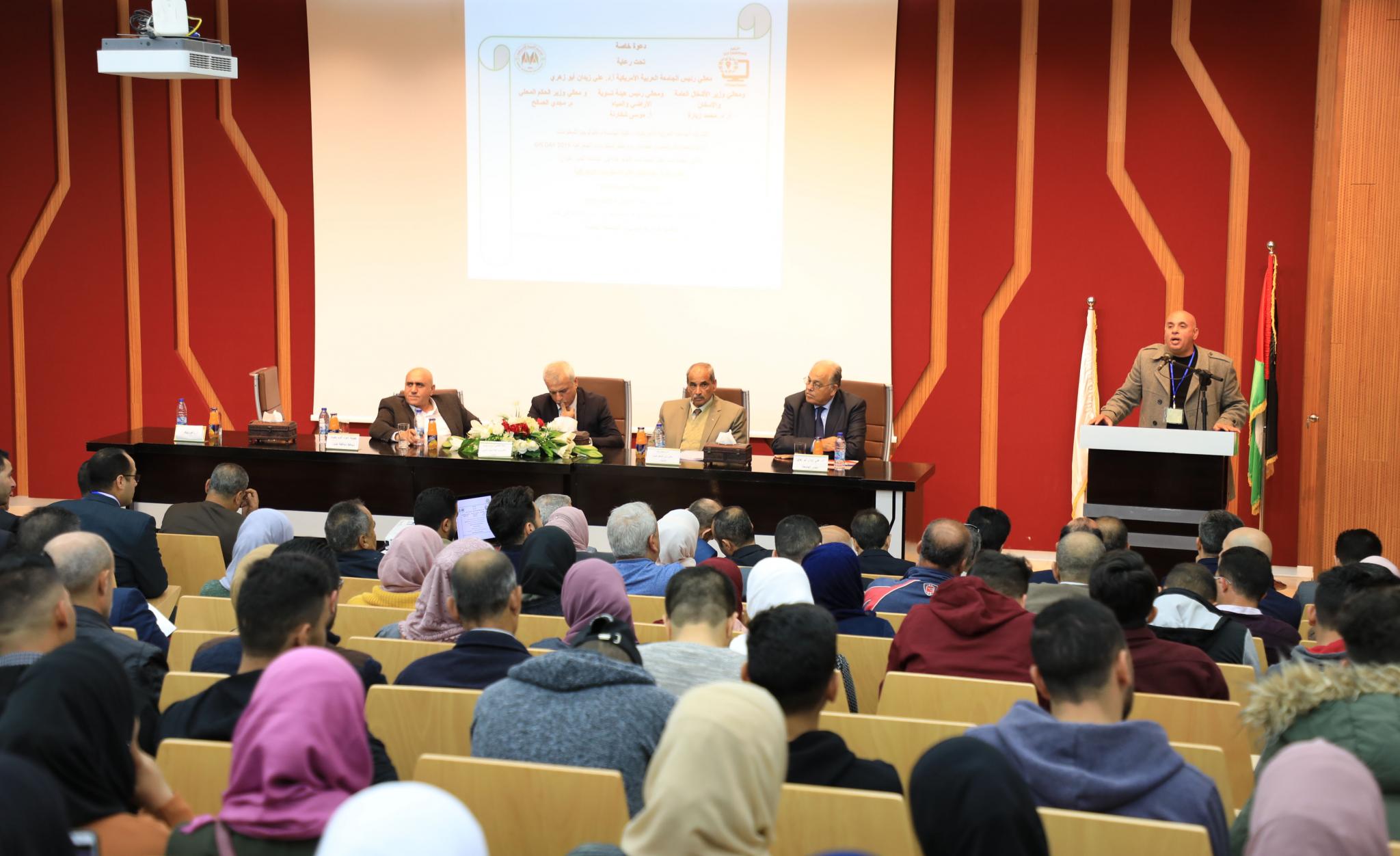 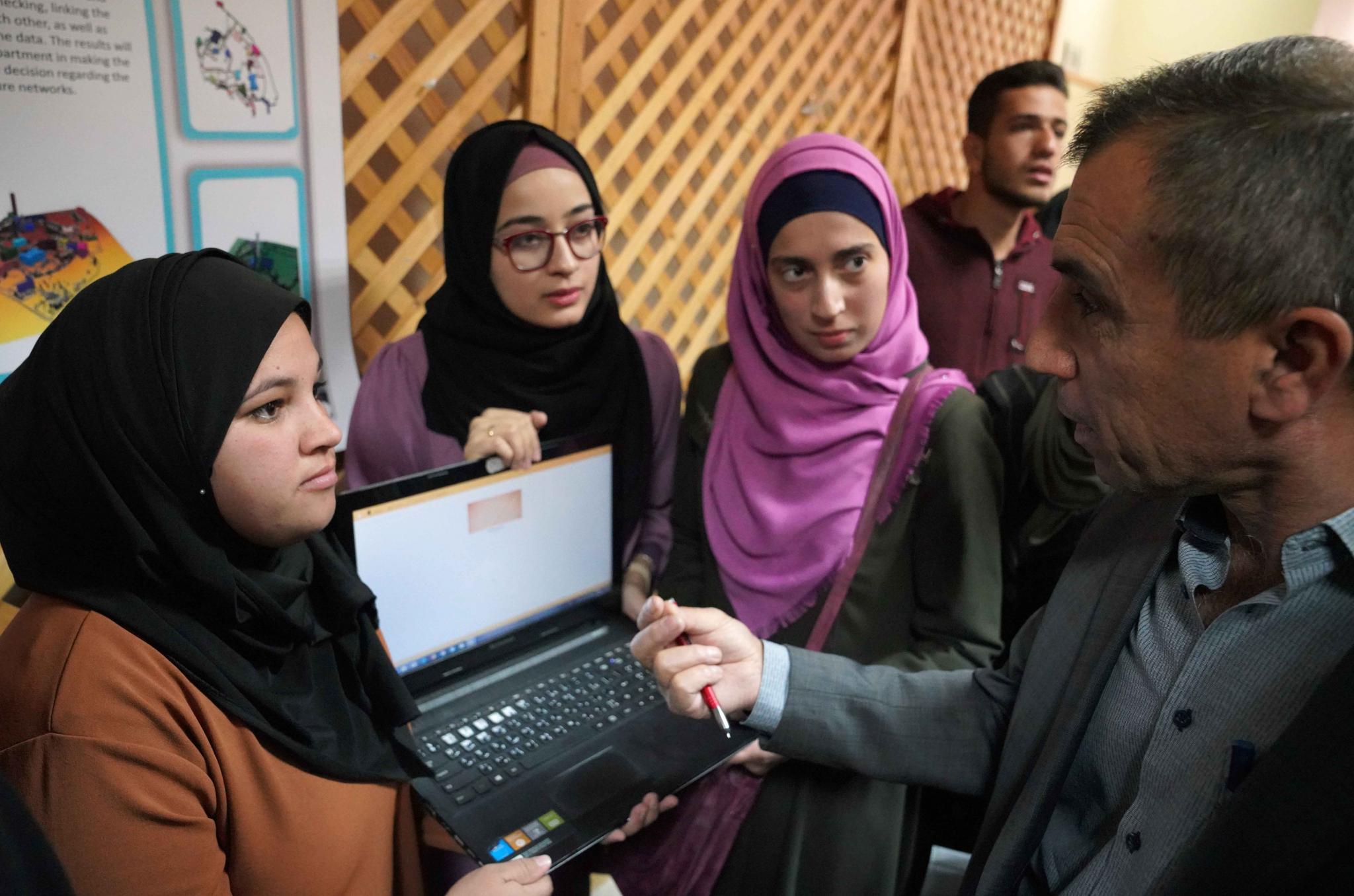 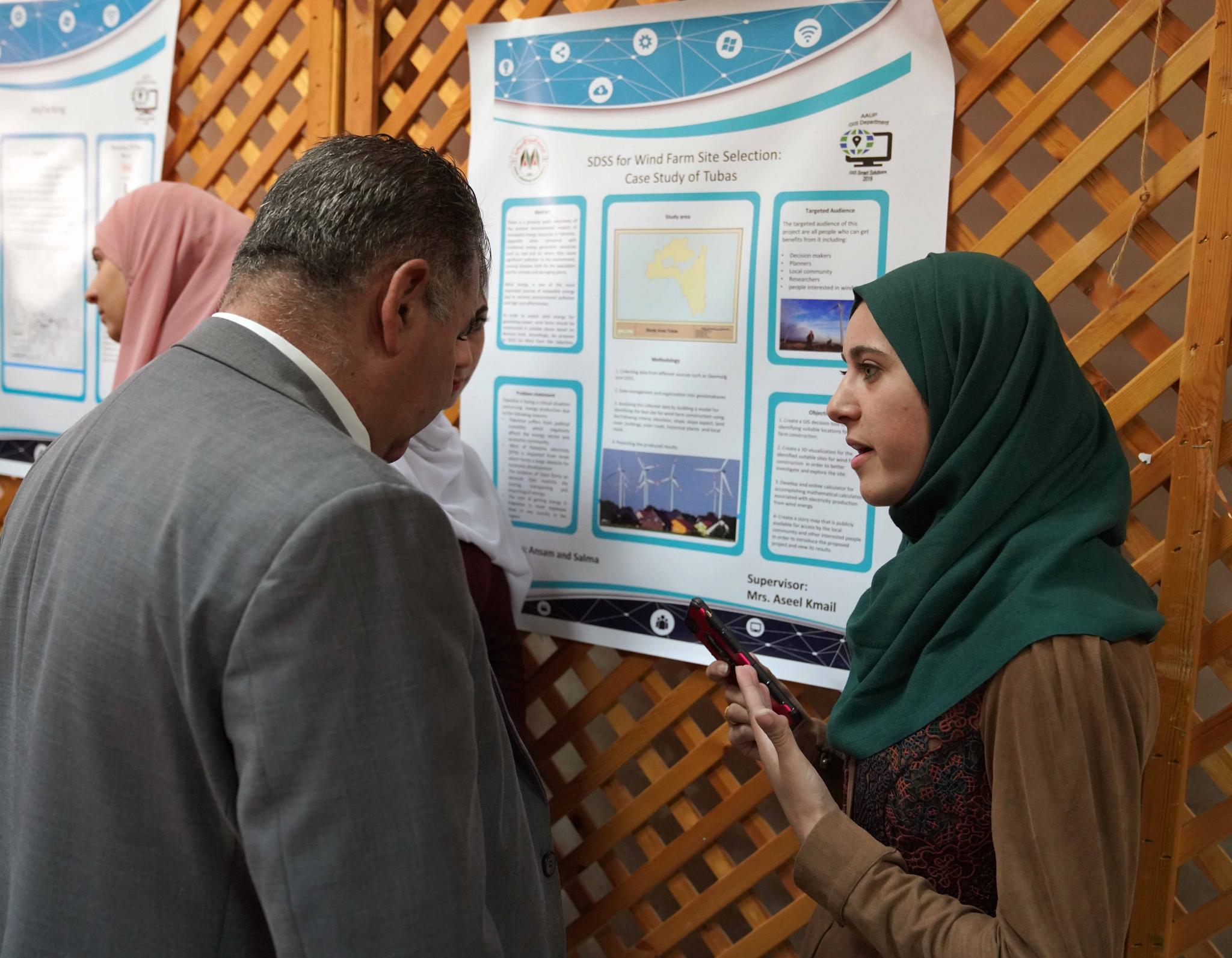 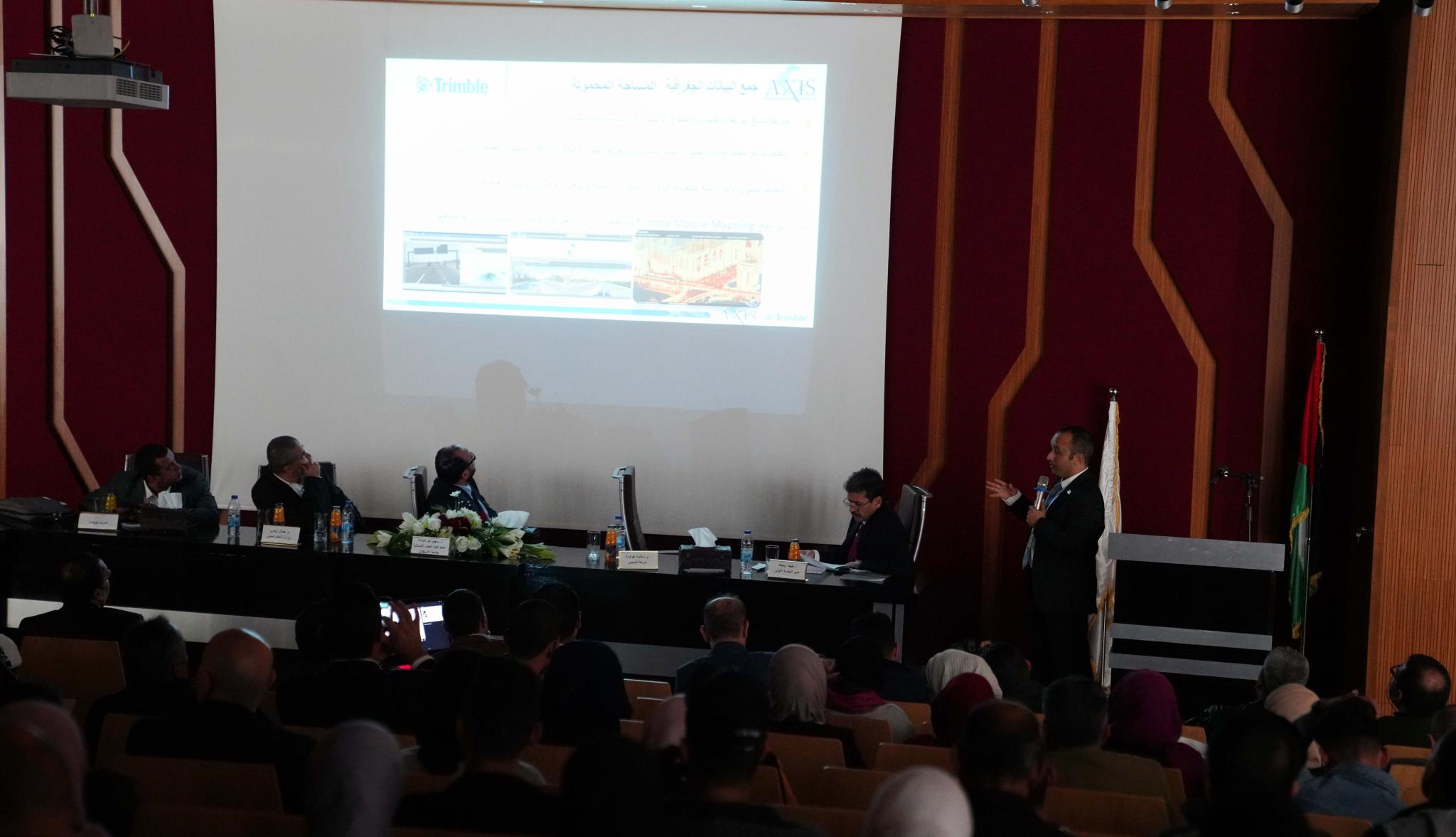 The Graduation of the Advanced Telecommunications Course
27 Dec 2019