Faculty of law at AAUP organized a conference for The Right of Peaceful Assembly in Palestinian Territories with the cooperation of Shams Center for Human Rights and Democracy.

The conference was attended by VP of Academic Affairs Dr. Muayad Abu Saah, Director of Human Rights Department at the Ministry of Justice Majdi Hardan, Director of Shams Center for Human Rights and Democracy Dr. Omar Rahal, Dean of the Faculty of Law Dr. Ghassan Alayyan, Academics and Jurists from Palestinian Universities, Directors and Representatives of Security Force in Jenin, human rights and legal institutions, and academic and administrative staff from the university, and university students. 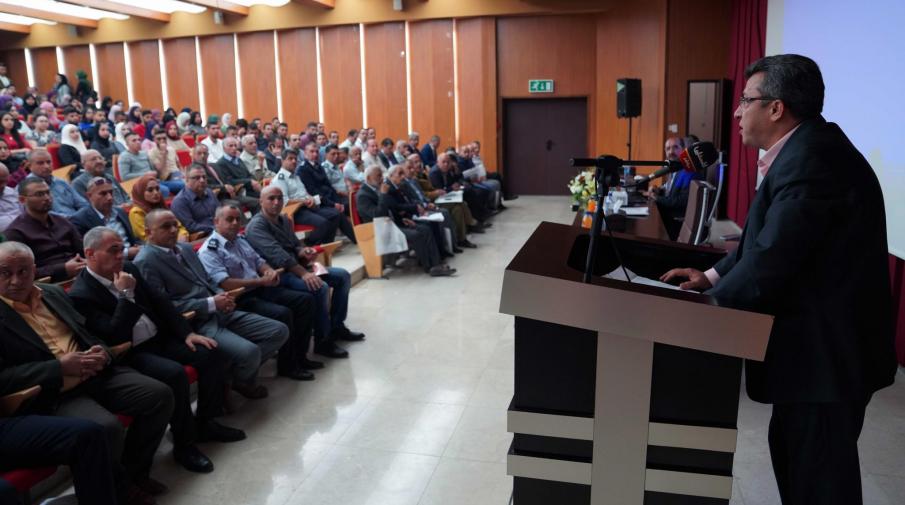 VP of Academic Affairs Dr. Muayad Abu Saah welcomed the attendance and said that AAUP continues to support such conferences hoping to sum up with effective recommendations where AAUP will support these recommendations for the benefit of Palestine, thanking all those who contributed in the success of the conference.

Director of Human Rights Department at the Ministry of Justice Majdi Hardan said that the ministry always works for the rights of the Palestinian citizen with the cooperation of other institutions, sectors on the national and international levels. it seeks for national strategic partnerships to come out with various results, as for the international level the ministry seeks to represent Palestine in the Arab League, where they were able to became a member of the Customary Charter Committee for Human Rights, as Palestine was able to obtain the Vice-President position for the Legal Consultative Organization.

The Head of Preparatory Committee of the Conference and Dean of Faculty of Law Dr. Ghassan Alian, said, "The Faculty of Law always strives to organize conferences in partnership with civil institutions, and we have the honor to organize this conference in cooperation with Shams Center. He explained that this conference serves the Palestinian society in light of their living conditions, in addition to some decisions issued by some parties, and therefore the conference decided to discuss this right for its importance.

Paper 2: The right to peaceful assembly and its relationship with other rights and freedoms, by Dr. Ammar Duwaik General Manager of ICHR. Commenter: Dr. Ahmad Debik Law Lecturer at AAUP

Paper 2: the constitutionality of the executive regulation of the law of public meetings No. (12) 1998 by the Lawyer Mohammed Al-Najjar from "Shams" Center for Human Rights and Democracy, Commenter Dr. Mohammad Jaradat Law Lecturer at AAUP

Third Session: Round Table, answered the question What is required from the Palestinian political system to promote the right to peaceful assembly? on the laws and legislation level, adapt national legislation that aligns with relevant international conventions, Political will, Democracy of political system, and The right to peaceful assembly between independence and national liberation