During the Celebration of Palestinian Curriculum Completion Dr. Al-hamdalla: Arab American University Is Developing and Growing on Standard Levels

Dr. Rami Al-Hamdallah Palestinian Prime Minister said: "It is my pleasure and honor to be here today at Arab American University, and seeing the University growing and developing on standard levels to become one of the scientific beacon and knowledge in Palestine. 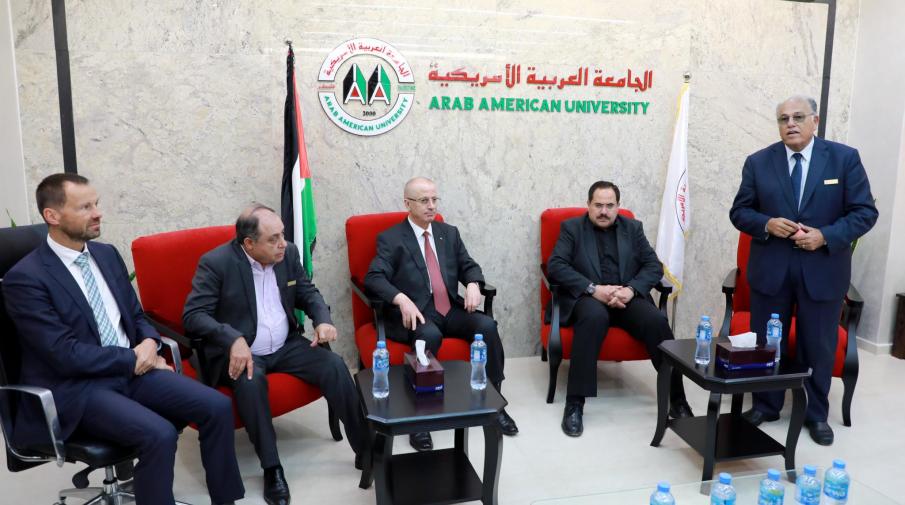 The Arab American University hosted the Ceremony of Palestinian Curriculum Completion under the title “ Qualitative addition and Implant for the national identity”. Which was organized by the Ministry of Education and Higher Education sponsored by the Prime Minister Dr. Rami AL-Hamdallah, where he said his speech and honored the academic and administrative staff and the deans and directors from Ministry of Education and Higher Education whom worked on the completion of the Palestinian curriculums.

After the national anthem and reciting some verses of the Holy Koran. Dr. Ali Zidan Abu Zuhari President of Arab American University opened the ceremony with an opening address, with the attendance of CEO of AAUJ Dr. Yousef Asfour, and members of Committee, Minister of Education and Higher Education Dr. Sabri Sidem, and Governor of Jenin, General Ibrahim Ramadan, Governor of Nablus General Akram Rajoub, Acting Governor of Tubas and Northern Valleys Mr. Ahmad Al-Asaad, Members from the Legislative Council, Member of Fatah's Central Committee, Ministry of Education and Higher Education family & the University staff, and representatives of governmental, security, civil and private Sectors.

Dr. Abu Zuhri, President of the University, said: "It is my pleasure to welcome you to this valuable ceremony, which is one of the greatest aspects of the Palestinian accomplishment, led by the Ministry of Education and Higher Education, to produce a complete Palestinian curriculum with Palestinian hands and minds.” Arab American University represents the first experience and role of private sector investment in higher education in Palestine, which has become the title of success, which is seen and touched by every visitor and student seeking for science and research. Despite being classified as a private university, it uses its budgetary surplus to develop academic programs, support scientific research, development infrastructure, laboratories and add new facilities to match international universities. This is a result of the Board of Directors vision and its shareholders, to build our nations and its citizens, and development Palestinian rights. "

He added, "this also resulted in enhancing the investment of the university environment, which was much greater than the investment in the university itself, and provides jobs for more than three thousand opportunities, both within the University or in the surrounding area, so it became the region for attracting education and investment, after it was fragile. As he explained, that the university is working to encourage the scientific publishing of its researchers in international journals which have the impact factor. In addition in providing them with financial support, and encourage scientific research with several awards, and apply exchange education and scholarship system in multiple areas, to fulfill the lack of academic staff in these areas and rely on Palestinian scientists.

As he addressed in his speech to the prime minister saying. “your commitment Dr, Rami Hamdallah in being prime minister is a golden opportunity for higher education sector in Palestine, were we are to take advantage of, in building and developing our university and its programs due to your witnessed experience and  your innovative vision in vital and basic sectors ”.

In his role, Minister of Education and Higher Education Dr. Sabri Sidem thanked the Palestinian teachers who wrote Palestinian curriculums in a short period and were able through their accomplishment, to achieve the desired goal. As he added, "We bow in respect to the Palestinian teacher and say with full mouth thank you for the great job. Thanks to those who wrote a curriculum in record time, not exceeding two years of work with determination despite all challenges. "

As he added, “On behalf of the Ministry of Education and Higher Education. I thank you from the heart, because you held on the flag, whereas the Palestinian child will only write the poem of struggle and because education will be nothing but liberation". As he also deplored an article published in a Hebrew newspaper that pointed out that Arab education in Jerusalem is weak and that the occupation gave 500 million shekels to develop education in Jerusalem, wondering why this article came at the time of starting school in Palestinian, which called this year “education year in Jerusalem”. However, Palestinians will not surrender, and the Palestinian soul cannot be broken. As he greeted Jerusalem citizens, teachers and their families, who works on developing education and improve it.

For his part, Prime Minister Dr. Rami Al-Hamdallah said, "Today we celebrate two important events: the opening of the academic year in the West Bank, Gaza and Jerusalem, and in our three schools in Qatar, Romania and Bulgaria, and in UNRWA schools at home and abroad. "The second and most important event is the completion of the Palestinian curricula in which you shared all of your experiences and aspirations to create innovative and interactive national curricula that respond to the challenges, as well as the successive global developments in the fields of teaching and learning”.

As he continued, “it is our right to be proud of this accomplishment, where this summarizes the experience of clever people that resists despite of living under occupation where he is able to function his experience to create and build his nation and develop it and its systems and sectors”. He explained that the goal of launching the Palestinian curriculum is to arise within the abilities and skills of the daughters and sons of Palestine, and the establishment of a reality that stimulates their awareness and national belonging. Which carried out by a national and societal movement, in accordance with a vision of the Supreme National Committee to reform Education System in Palestine.

Dr. Al-Hamdallah pointed out that all school curricula for grades 1 through 12 have been prepared in the academic track, and integrated and placed the vocational track for grades 7 through 9 in three vocations per class. The books have been prepared to improve national awareness, and integrated four special books for programming and a Rapporteur for Christian Education for the twelfth grade to be included in Al-Injaz exam. Curriculum requirements have been determined in terms of tools, devices, laboratories and techniques, this was supported during feedback and final submission as their will be a chance for any amendments and subsequent developments.

He pointed out that this year, we launched one of the most important procedures that translate the determination in developing the system of education in its entirety to reach to the highest standards and national goals, where we launched the general secondary system "Al-Injaz". Greater space for ​​free extracurricular activities, number of smart education schools, open18 schools , expansion of the current schools, development of infrastructure, opening of 59 classes public schools. Higher education also showed development in its outputs to suit the needs of the community and national needs. By aligning with global developments adoption, which new programs were licensed but prevented inflation and duplication of similar Academy programs to increase opportunities in national and international labor market, through reforming Higher Education Council to ensure greater and more comprehensive representation of all sectors.

Dr. Al-Hamdallah mentioned the partnership with private sector, civil and international institutions to support education in Jerusalem, protect its educational institutions and maintain Palestinian curriculum to be a main lever to counter occupational attempts to Judaize and displace its people. Referring in building schools in areas that are threated from occupation and settlements and beside the wall. Where the Challenge “Tahadi” School No. 10 was opened in Bazyq area in Tubas and in the northern Jordan Valley.

He assured that the completion of the Palestinian curriculum is an important milestone in a continuous and challenging series of work, as he hopes improving the quality of education from kindergartens to higher education institutions. He thanked the countries and donors who contributes the continuity of UNRWA services specially the educational sector that helps Palestinian to face the stifling crisis due to the continued blackmail and threats of the United States. Appealing to the countries of the world to pay attention to what is happening on our land from the conflict raging, and to take deterrent steps to confront the threats of the US administration that gives legitimacy to the occupation, and drive the whole area to instability.

He called for Hamas movement to respond to President Abbas' initiative to achieve reconciliation and enable the government effectively and unconditionally work together to reduce division, unify the institutional work, continue achievements in the education sector and others and place the world in front of its responsibilities to end the occupation.

The ceremony included national orchestra, poems, a film about the Ministry achievements, and honoring the contributors to the completion of curricula and the teachers whom participated in the curriculum from different governorates. 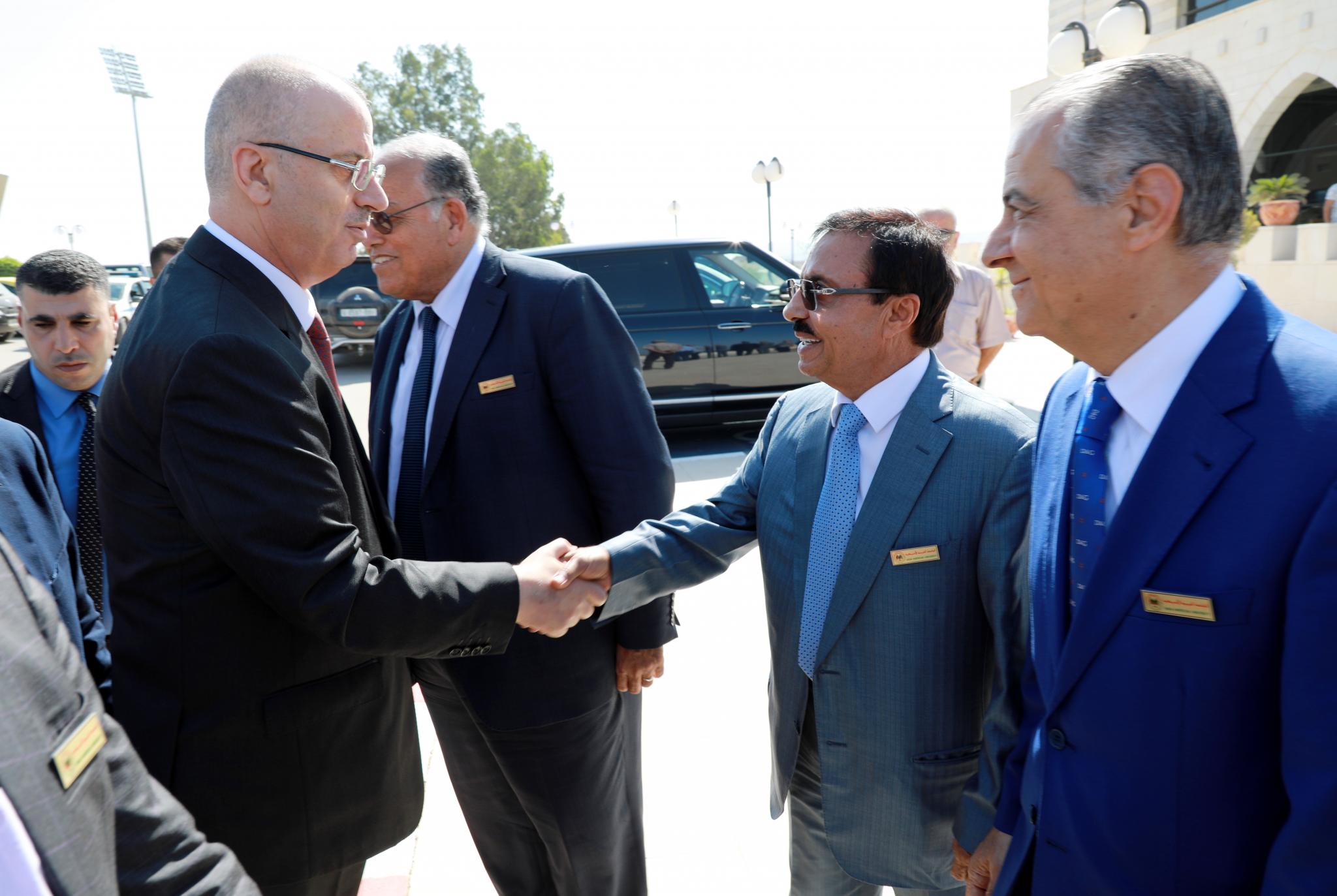 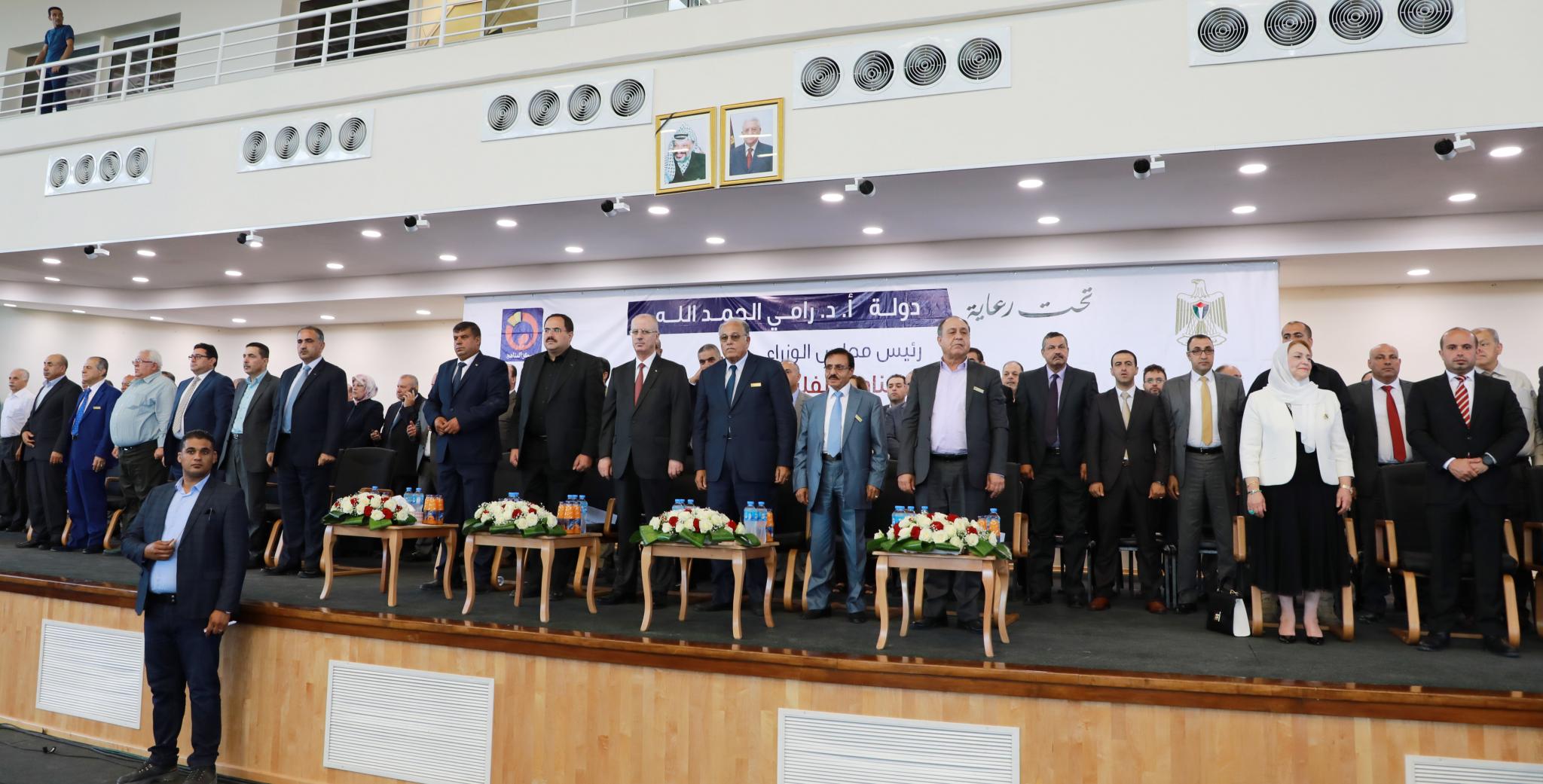 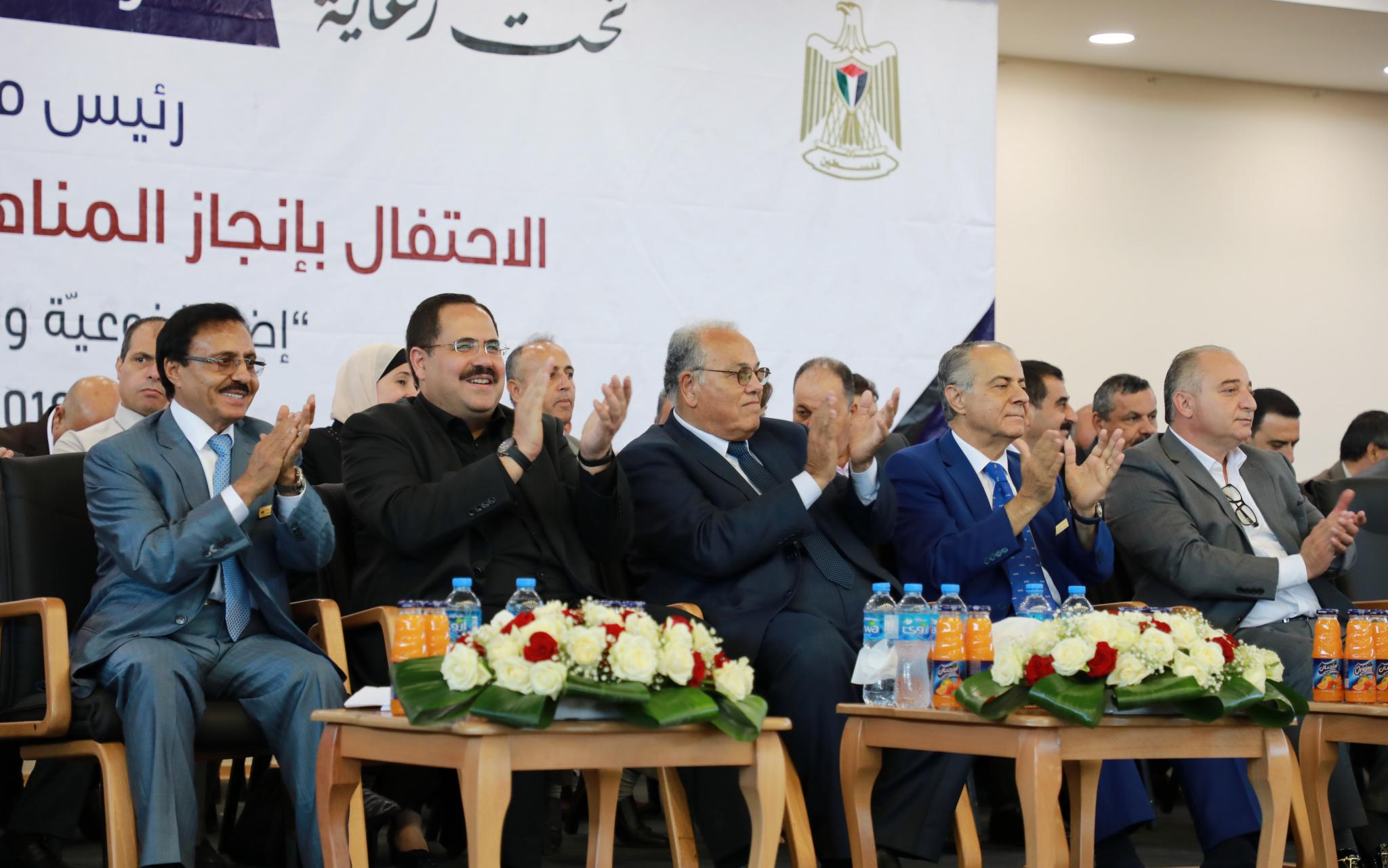 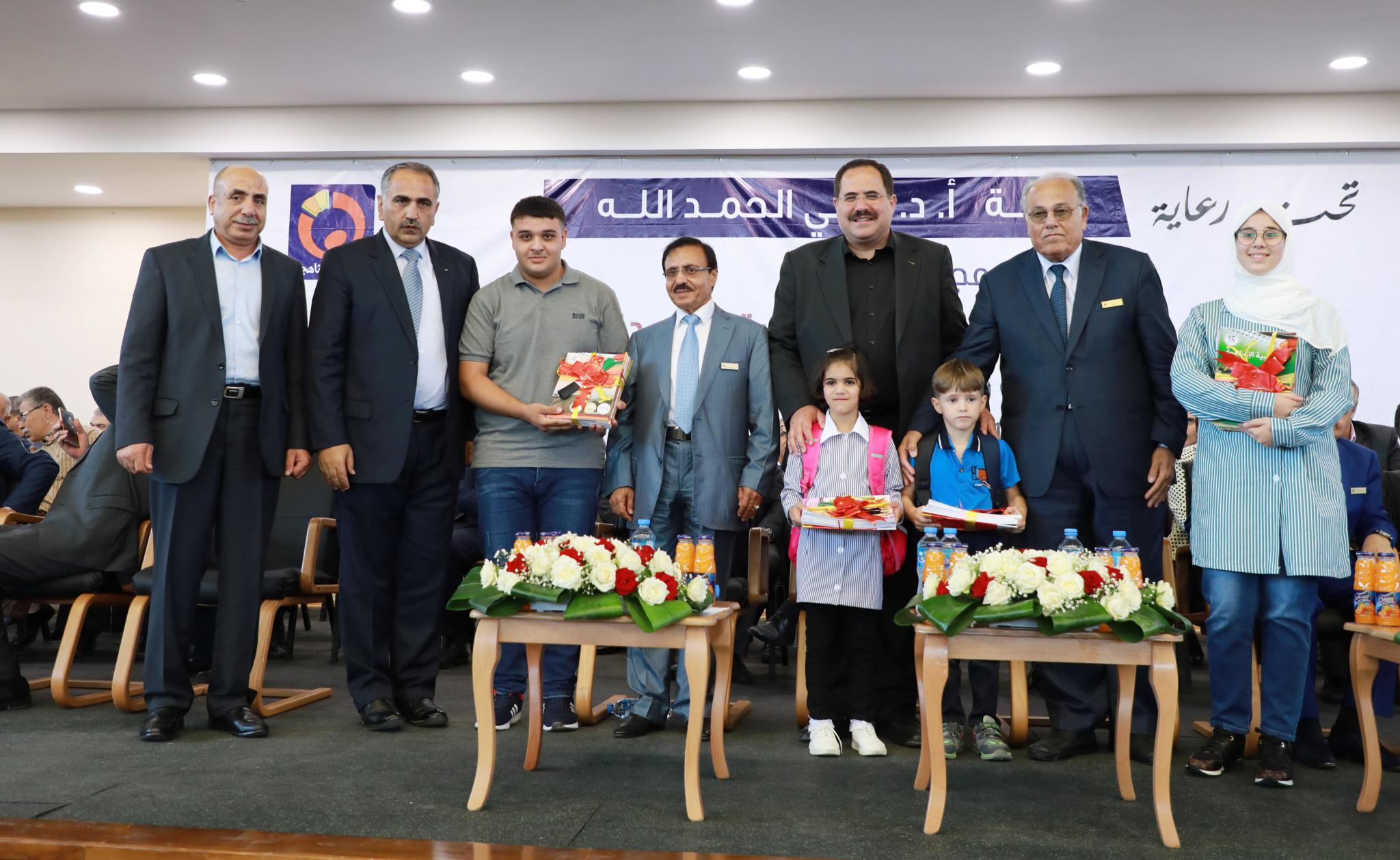