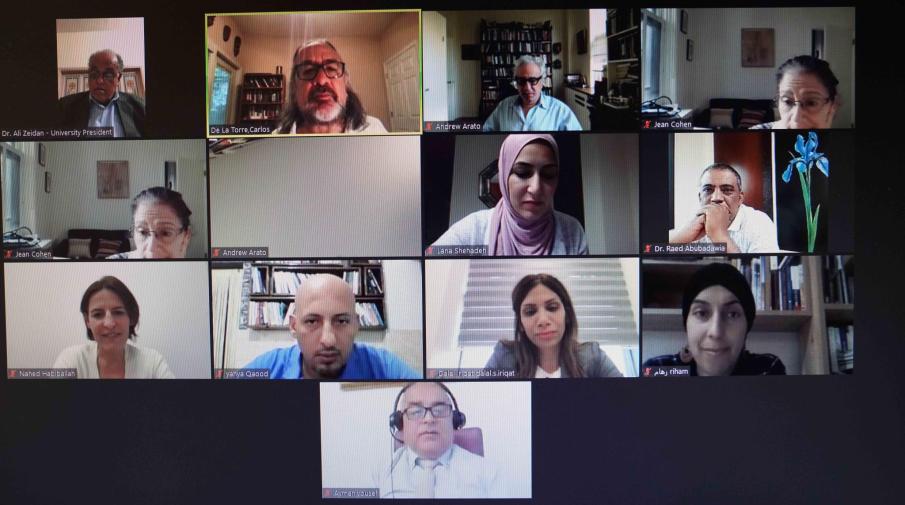 In his opening speech for the “The Age of Populism” Conference, Prof. Ali Zeidan Abu Zuhri- the University President talked about the importance of populism especially “under the global decline of traditional democratic political forces” and he said that this conference “comes in line with AAUP’s philosophy and its future vision that is based on positive interaction with research developments in the social and natural sciences”.

In his speech, Dr. Iyad Yacoub- the Chairman of the Policy and Conflict Resolution Studies Center gave an introduction and definition of what the center offers “from the education and communications opportunities to build a stronger community of intellectual and professional friendship”, he also explained how this conference serves the visions and missions of the center that aims to encourage the scientific research, and publish studies related to the conflict topics and other related topics.

The conference was divided into five scientific sessions that lasted for three days, where researchers and intellectuals submitted their excellent scientific papers that addressed many aspects of the main topic of the conference, related to the definition of populism, its relation to the political and social fields and its reflection on democratic and non-democratic societies.

The conference addressed the different definitions of populism through presenting a theoretical historical background about the development of the concept, and the researcher speakers tried to analyze the term in an attempt to study its ramifications and overlaps with other sciences related to the crystallization and development of the term populism, such as democracy, regimes, religion and globalization. Researchers also talked about the confusion between the concepts of popularity and populism.

The conference was concluded by a round table discussion where the audience tried to explain “populism” and to reflect it on the Palestinian-Israeli conflict in an attempt to study the impact of the Israeli populist discourse on its political decisions, especially the ones related to the implementation of its racist occupation policies on the Palestinian people.

In its conclusion session, Dr. Nahed Habiballah- the Head of the Scientific Committee of the conference announced that the conference will publish a policies’ paper that explains the problems of the concept of populism, its implications and how to deal with it, and its repercussions on regimes and the democratic process.