Under collaboration with the Embassy of India in Palestine and on the occasion of the 150th anniversary of the Indian Lawyer- Mahatma Gandhi’s birthday, the Policy and Conflict Resolution Studies Center in Arab American University- Ramallah Campus has organized a seminar. 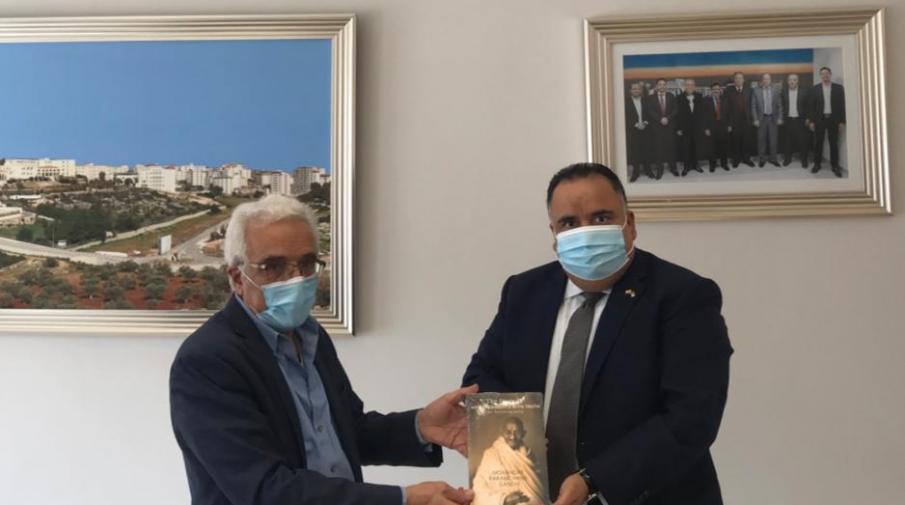 Mrs. Rula Shahwan- the Manager of the Policy and Conflict Resolution Studies Center opened the seminar that was attended by H.E. Mr. Sunil Kumar – the Ambassador of the Embassy of India in Palestine. Mrs. Shahwan started her speech by introducing the center and its goals to ease the access to academic knowledge for students, academics and researchers and to conduct political researches and papers to support politicians and Palestinian decision makers.

Dr. Ayman Yousef- a Professor in the Political Sciences Studies in AAUP moderated the seminar and started by welcoming the guests and expressing his pride that AAUP is hosting this seminar that will focus on the main factors that constituted Gandhi's liberation ideology and his methodology in resisting colonialism to reach liberation.

In his speech, H.E. Mr. Sunil Kumar – the Ambassador of the Embassy of India in Palestine said that Gandhi’s philosophies and values are not for India only, but it also inspired and still inspiring the whole globe and people around the world. He also assured that Gandhi had used main strategies in his liberation struggle against the British colonialism like the peaceful nonviolent resistance that adopted unarmed means of resistance such as demonstrations, peaceful marches, sit-ins and boycott of the British government with a focus on economic boycott, civil disobedience, the non-cooperation movement, and boycotting British government centers.

H.E. also focused on the importance of keeping Gandhi’s memorial living around the world and indicated that this seminar managed to introduce Gandhi’s methodology that led India from the international conflicts, colonialism and violence to democracy and freedom.

20 students from the Masters in Conflict Resolutions and Masters in Intercultural Communications programs have participated in the seminar and asked the ambassador some questions about India’s policy to support Palestine. In his turn, H.E. provided some thoughts and ideas of how to promote the Palestinian cause in India.

It is good to mention that Gandhi’s methodology and liberation movement is one of the study cases that students of the programs (Master in Conflict Resolutions and Master in Intercultural Communications) study and discuss.

H.E. Mr. Sunil Kumar – the Ambassador of the Embassy of India in Palestine also had a meeting with Prof. Waleed Deeb- the Academic Advisor of the Board of Directors and the Founding President, Dr. Dalal Iriqat- the VP for International Relations and Dr. Iyad Yaqoub- the Head of the Policy and Conflict Resolution Studies Center where they discussed collaboration means between Arab American University and other Indian educational institutions and discussed the possibility of future joint collaboration.

A Seminar about “Islamic Finance: between Theory and Practice” in the University
23 Sep 2020
END_OF_DOCUMENT_TOKEN_TO_BE_REPLACED