Prof. Ali Zeidan Abu Zuhri- the University President and Major General Bilal Natsheh- the Secretary of the Qatar Permanent Committee for the Support of Al Quds signed a partnership and collaboration agreement to support the Jerusalem students in Arab American University. 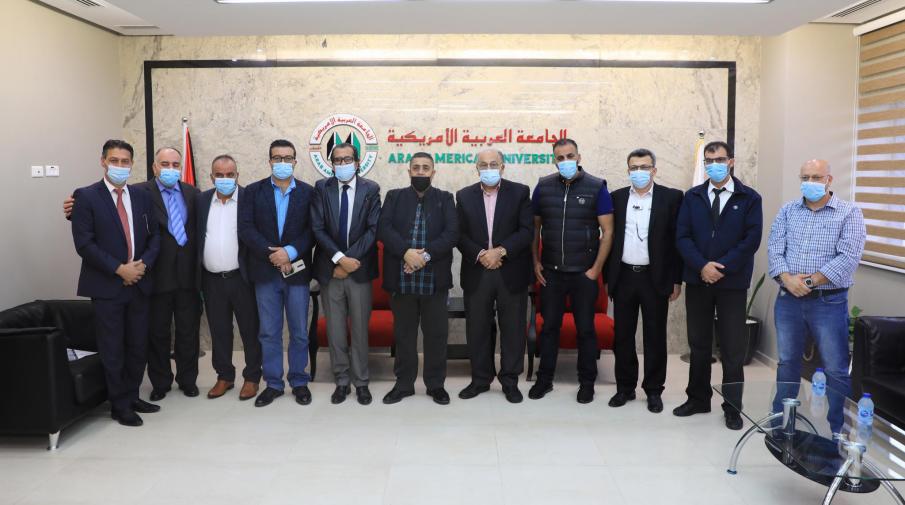 Prof. Abu Zuhri welcomed the Major General Natsheh and the accompanied delegation and praised the role that the committee does in supporting Jerusalem. He gave a detailed explanation about the university, its establishment period, its academic development, and the different unique BA, MA and PhD programs it provides. He ensured on the importance of the joint relations and partnerships with the national sector institutions to support students especially in the current hard economic situations that the Palestinian people are facing.

Prof. Abu Zuhri also clarified that by providing many financial scholarships for its students and reducing the credit hour fees for some of its programs, Arab American University is doing a great patriotic role besides its educational and cultural role. This will encourage students to continue their higher education despite their economic status.

Furthermore, Mr. Natsheh- the Secretary of the Qatar Permanent Committee for the Support of Al Quds praised the role of AAUP in supporting its students, and said that signing this agreement aims mainly to financially support the educational and cultural sector in Palestine upon the directions of the committee. This will in turn contribute in reducing the financial weight on Jerusalem students by providing them with scholarships since they face lots of obstacles and suffer from the Israeli policies that target their national and civilizational identity.

According to this agreement, Major General Natsheh handed the university President Prof. Abu Zuhri a check of the amount of 40.000 JD that will be deposited in AAUP bank account to support the students of Jerusalem in the university, and both parties will agree on the list of the names of students that this financial aid will cover.