The University and Bank of Palestine Discuss Joint Cooperation

Arab American University welcomed a delegation from the Bank of Palestine in its campus in Ramallah to discuss ways of developing and enhancing joint cooperation between the two parties. 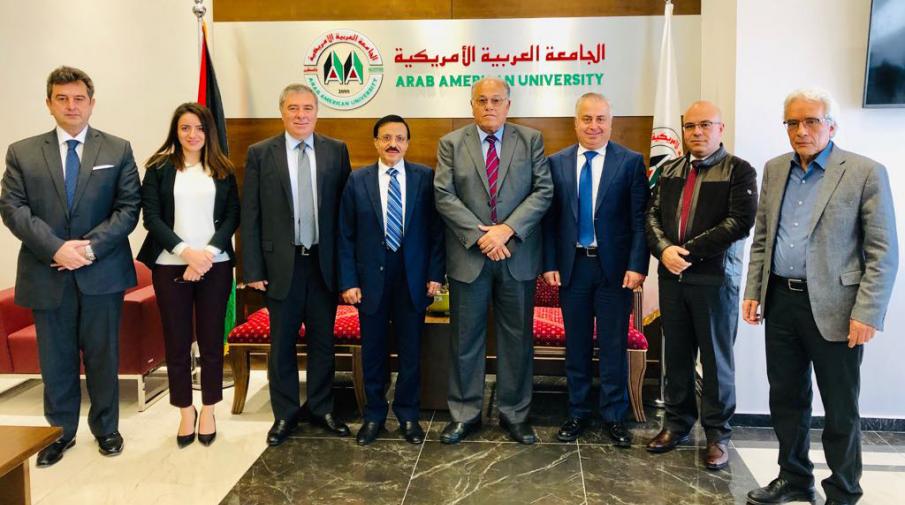 The University and Bank of Palestine discuss joint cooperation

The delegation included Mr. Rushdi Al-Ghalayini the Bank's General Manager, and his assistant Mr. Nasser Bakir, and a number of Bank officials. The delegation was welcomed by the Chairman of the Board of Directors Dr. Yousif Asfour and the University President Prof. Ali Zidan Abu Zuhri, the Academic Advisor Prof. Walid Deib, and Vice President of Administrative and Financial Affairs, Mr. Faleh Abu Arra.

During the meeting, Dr. Asfour presented the achievements of the university regarding academic programs in all levels, its developed facilities in the main campus in Jenin and in Ramallah Camus, and the needs of its student, assuring the importance of the strategic relationship between the university and Bank of Palestine, which would strengthen this relationship.

The two sides also discussed ways to facilitate the financial services provided by the bank to university students, its role in providing financial support of fellowships loans, and the support for Excellenct students, in addition to the grant of the late Hani Shawa for the students in the faculty of engineering.

Al-Ghalayini appreciated the academic and economic role played by the university in the Palestinian society, which confirms the keenness of those who work on them to serve their society and their country through investing in human resources that reflects in the economy and the development of society.

At the end of the visit, Al-Ghalayini announced that the bank will present one scholarship to the first batch of PhD students in business, expressing the importance and specificity of this program, the first of its kind in Palestine, to be announced in the coming period.