Arab American University celebrated the 51st anniversary of Al-Karama Battle by organizing a political seminar in cooperation with the Ministry of Information. It hosted the Revolutionary Council of Fatah, Major General Abdel Ellah AL-Atira who participted in the battle, and the representative of the Ministry of Information Abd Al-Basset Khalaf, the Dean of Arts Dr. Marwan Abu Al-Rub, the Head of General Culture Dept. at the Faculty of Arts Dr. Jamal Hanisha, and students of the University. 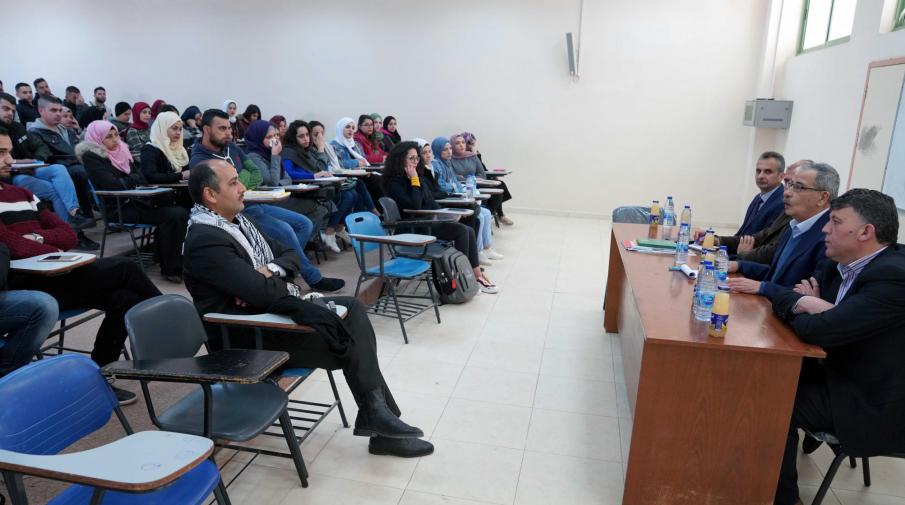 The seminar was opened by the Dean of Faculty of Arts Dr. Abu Al-Rub where he welcomed the attendees and assured to the importance of this seminar, which talks about the battle that returned the dignity of all Arabs, as he welcomed the Major General Abdel Ellah AL-Atira who participated in the battle and was hosted to convey the facts of the battle and its psychological and moral results.

The head of the General Culture Dept. Dr. Jamal Hanisha said that Karameh battle was a turning point for the Arab-Israeli conflict and the first victory achieved by the Arabs on the Israeli entity, assuring the importance of sharing the details of this battle with all generations.

The Major General Abdel Ellah AL-Atira thanked Arab American University and the Ministry of Information for hosting this seminar that talks about one of the most important Arab battles which had a great results and impact on the Arab and Islamic nations.

As he mentioned the qualification ways for revolutionary work before the battle. Where there was Arab support specially from the leader Jamal Abed Al-Nasser who assured the Palestinian resistance, noting that the number of fighters who participate in the battle were about 1000 to liberate Palestine. Noting that the pressures exerted on the fighters and how they have overcome these pressures and also addressed the obstacles they faced in their lives before and during the battle.

As he said that Karameh battle was the result of the success of the resistance fighters in defeating an army that was said to be an indomitable army as they achieved a great victory over them, and enhanced the Palestine Liberation Organization and thousands of young Palestinians joined the organization and started a paramilitary training for them. Karameh battle returned part of their dignity that was last in June 1967, with a raise of the international approval and acceptance of the resistance, along with many pro-Arab demonstrations in Norway and Sweden

At the end of the seminar, students opened a discussion and asked questions.