The University celebrated the graduation of the fourth Batch of MBA students with a joint program with Indiana University in Pennsylvania, where the ceremony was held at the university in Ramallah Campus.

The Chairman of the Board of Trustees of the university Dr. Mohammed Ashtayeh, attended the ceremony along with members of the Boards of Trustees and Administration, the Minister of Education and Higher Education Dr. Sabri Sidem, the University President Dr. Ali Zidan Abu Zuhri, the Academic Advisor, and The Dean of the Faculty of Graduate Studies, Dr. Abdul Rahman Abu Lebda, members of the academic and administrative staff, and graduates relatives. 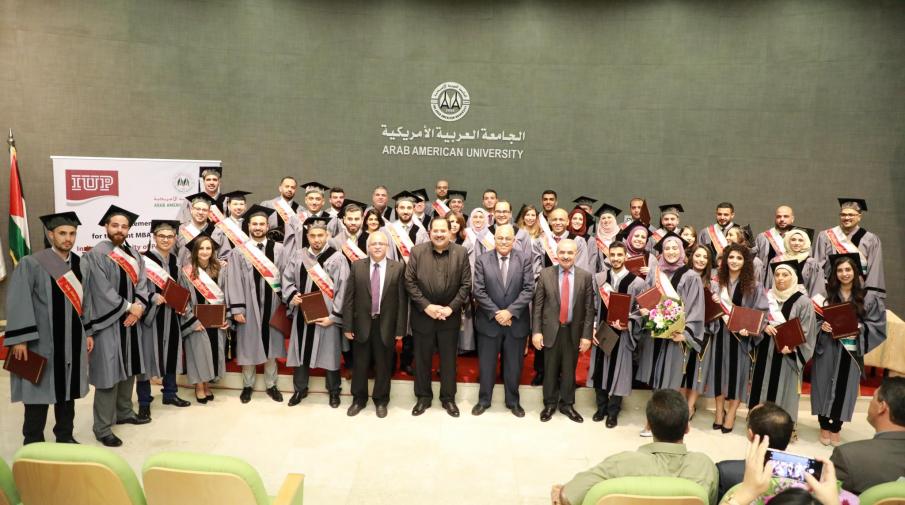 The University’s President Prof. Ali Zedan Abu Zuhri opened the ceremony by welcoming the audience and said: that the MBA program with Indiana University of Pennsylvania. Has started five years ago and three groups graduated from it. Our MBA graduates hold many important position in different organizations both in the public and private sectors”. As he announced that announce that the PhD program in business is soon to announce the first group of accepted students of cohort one. This program is accredited in USA from AACSB, one of the most important accreditation agencies in the world. Adding, that this is the only PhD program in Business in Palestine and the first PhD program in AAUP.

As he assured that the AAUP believes that its students must be provided locally with programs of international standards. AAUP aspire to be one of the best universities in the region. The graduate programs are unique in nature and prepare the students to compete in the global market.

Prof. Abu Zuhri also said: that AAUP is proud of the student’s accomplishment; and know it was not easy, we know that your families had to suffer but we also know that it was worth it. Thanking the academic staff and IUP academic staff for their best to prepare the students to meet the challenges of the business market in the new century, saying to the students that: now it is your turn to overcome all difficulties and utilize what you learned in your profession.

As he added: We know that we did not teach you everything and we should not, but for sure we taught you how to self-learn and that is the most important skill one can acquire.

The representative of Indiana University congratulated the students on graduating and obtaining an internationally accredited academic degree. Indicating that Less than 9% of the population of the United States of America received a master's and doctorate degree in business administration, as well as in Palestine, Which makes the higher graduates rare in society, and explained that this program will help them access high administrative positions in Palestine, assuring that the teaching staff from both universities provided all the skills and expertise to achieve the dreams of its student, as he expressed to the graduates the importance to apply what they learned to develop the state Palestine.

Minister of Education and Higher Education Dr. Sabri Sidem congratulated the graduates, their families and the university on this outstanding achievement. "I am pleased to be with you today in this good gathering, two years after the graduation of the previous batch, in this pleasant presence from Zanuta to Khan- Alahmar to Khallet al-Daba reaching to Arab American University, the steps of education continues in this will and determination, which we are proud to see within us today children that may not understand the details of this ceremony, but will be among the good group that will join this university Future ".

He assured that the educational certificate is a weapon to confront the occupation. And that, "Education in Palestine is our continuous weapon to face of the occupation, and education in this university, which we cherish, constitutes an authentic Palestinian platform that brings us all together. We are proud to see about 60% of the students of this university are from the people in historic Palestine, as we are proud that our Palestinian universities contains all these generations that we all cherish. "

He added: Yesterday we published a press release saying that Israel is attacking education, this time by forging our books. Yesterday, it was deleting some words and some vocabulary. Today, it is cutting off large volumes of books that speak of resistance, map, struggle, the steadfastness of the Palestinian people, and therefore today this is a declared war in the face of this occupation in every location and I think that the graduates are the knights that will face this reality, so we count on you all.

The University’s Chairman of the Board of Trustees Speech

Dr. Mohammed Ashteh congratulated the graduates and said, "We are lighting 45 candles for you in the sky of Palestine, lightened by Arab American University, not by its American dimension but by its pure Arab-Palestinian national dimension, and by graduating we respond to the deal of the century on this day."

He added, "There are those who say we haven’t yet seen the deal of the century, and we have already taken a position towards something we have not seen yet. I tell them that they are right, but what we saw is uglier than the paper text of the deal of the century. This is the practical application of Trumps administration by closing the Office of the Palestine Liberation Organization And the declaration of Jerusalem as the capital of Israel, and the cutting the financial sources of UNRWA, and the siege of the Palestinian Authority in all aspects of its work and the characterization of terrorism in the Liberation Organization, all this is uglier than any text paper can be said about the deal century, "he continued," The Palestinian leadership headed by President Mahmoud Abbas Abu Mazen took a decisive stand against this deal, and we are fully aware of what we say because this conspired against the Palestinian question in all its aspects. "

Dr. Ashteh said "On the 28th of this month, the Palestinian Central Council will convene. The agenda of this meeting will include three main issues: our position on the deal of the century and its rejection, and rejection of any initiative that does not meet the minimum demands of the Palestinian people. The meeting will also deal with the issues related to the Gaza Strip. The third issue is the formulation of the relationship with the occupation, which cannot continue imposing reality against us and trying to erase the possibility of establishing a Palestinian state. "We say to this gathering, that we will remain steadfast for the sake of Palestine There is no one who can accept the novel about Jerusalem that it is Jewish, not the reality imposed by the occupation, and we do not accept the continuation of the current status in any form, "adding that the central council faces major challenges and we hope that the road map is clear for us.

He thanked the Minister of Education and Higher Education Dr. Sabri for his support and standing with the Arab American University, which moves from horizontal expansion to vertical expansion, explaining that the MBA program is a model of partnership for a qualitative education between Arab American University and valuable universities in the world, expressing his ambition to develop other quality programs.

Dr. Ashteh pointed out that the measure of wealth in Palestine is the university certificate, because education has become the strategy of survival of the Palestinian, and contributes to the national mobilization that is a lever to defeat the occupation. In this defeat, the Palestinian state, with Jerusalem as its capital can be established, he pointed out that development has taken three curves in the world namely agriculture, land and its components, manufacturing and industrial capital, technology and the digital world, where the last one the AAUP is heading towards.

The Dean of Faculty of Graduate Studies Speech

The Dean of the Faculty of Graduate Studies, Dr. Abdul Rahman Abu Lebda, said that the University did not stop at the Master degree of Business Administration, but developed a doctoral degree in the same specialization in partnership with Indiana University, where the university began accepting students for this year, calling on graduates to take advantage of this opportunity and join the program He said to them: "As you stand here looking at the future, I know that you will spread success in achieving your goals. I hope all your wishes come true. Now you are armed with this certificate. Arab American University will always stand by you and support you."

He added, "I am proud to share with you this special day in your life, as you move from one stage to another, each of you deserves his place here through your effort and perseverance in learning and achieving the dream, you must all be proud of what you have achieved now, "He thanked the faculty for their great role in conveying the message and experiences to the students, hoping that this will be reflected in the expansion students' scope in their lives.

Tariq Soufan, one of the graduates of the program, presented his success story when he made a decision to complete his career and excellence in his work, addressing the obstacles he faced during his study between the university and his family and his work. He also touched some of the situations he experienced during his time on the university, as he asked "Is all the time and money invested in this program worth it? I will answer you, yes it is, for several reasons, the most important reason is that the labor market is a huge challenge we face every day full of complexities and unknown things and therefore its required from us as administrators to find solutions and those who have a comprehensive management perspective regrading work environment are the only ones who will succeed in putting solutions and this is what we learned in the MBA program.

He Added, "The program raised the level of administrative education in Palestine, and other universities began to imitate our university. The program also raised the level of competition clearly with other universities, as he advised that graduates that they should choose one or two of the ideas and skills that were acquired during their study and apply it in their professional and personal life. Thus, the result will be that what you have learned is right, calling on the graduates to resume their studies and reach the highest degrees in the same specialization.

For the graduate’s speech Nadine Siam said, "I am proud to stand here today, to represent my fellow graduates, and now we can say, we have done it," she said, noting that the program has achieved many dreams and has become a reality, thanking Arab American University and Indiana University for providing such a distinguished program. As she added that the program has provided a lot of technological and modern information, as well as professional and distinct experiences, as the students will remember all that they have gained in their working life."

She called on her colleagues to preserve on the principles, make the right decisions and apply all that we learned in the program, thanking and appreciating the role of the teaching staff, which provided all their skills, experiences and tools needed for the student. "Through our teachers we discovered a lot," she said, and recommended that the program is not only an educational certificate, but rather a life style that we should apply in our working life.

During the ceremony, a video of the students at Indiana University whom where congratulated for their graduation. A video of the graduates' memories during their study, and certificates of excellence were awarded to six graduates with a grade of 4.0. They were Heba Fozan Fadl Jabi, Nisreen Saleh Shehadeh Bawatna, Issa Morcos Kamel, Karim Ossama Sabri, Omar Hani El Saleh, Magdy Mousa Shawer, as the ceremony included handing over the certificates to the following graduates: 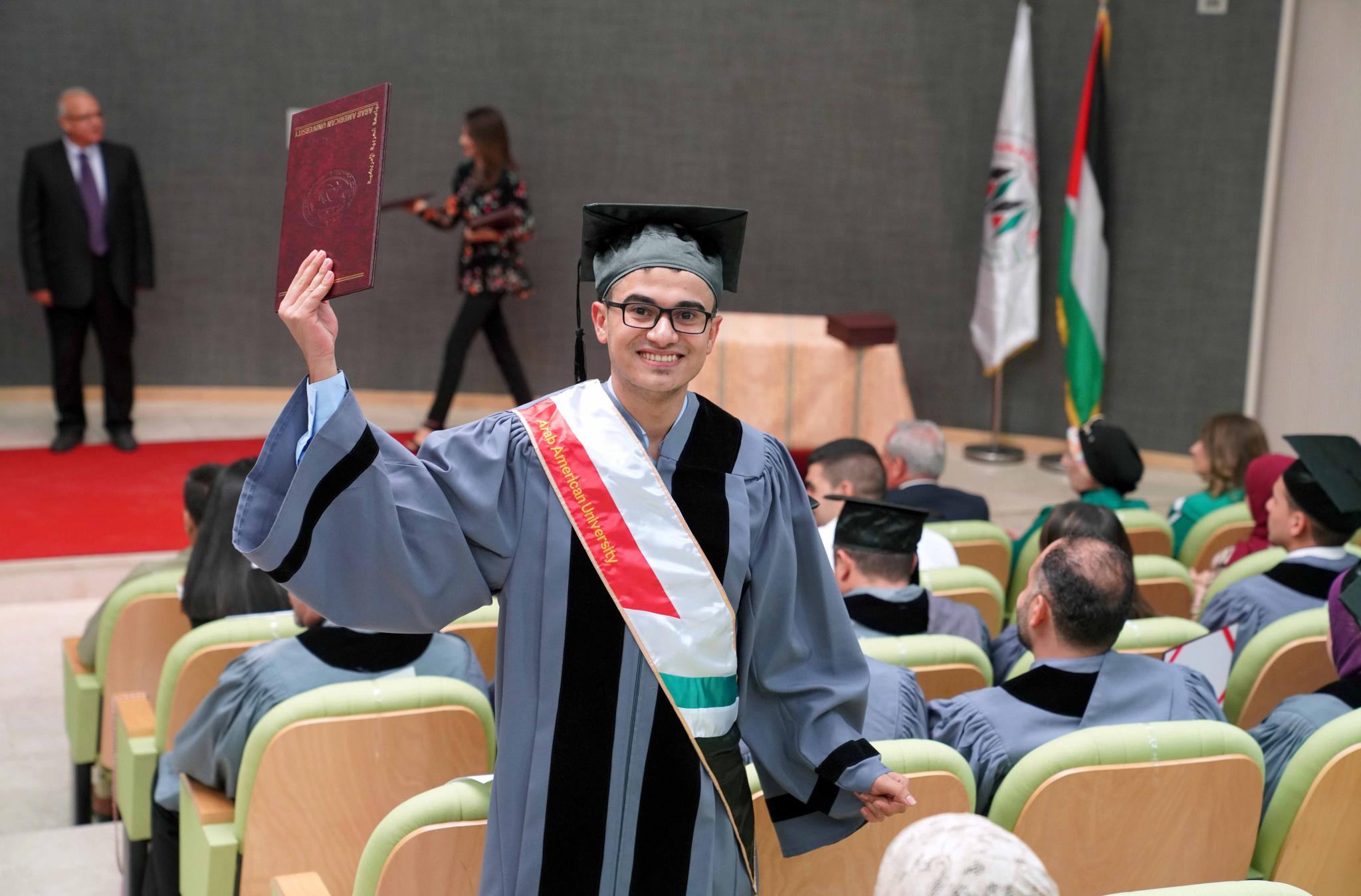 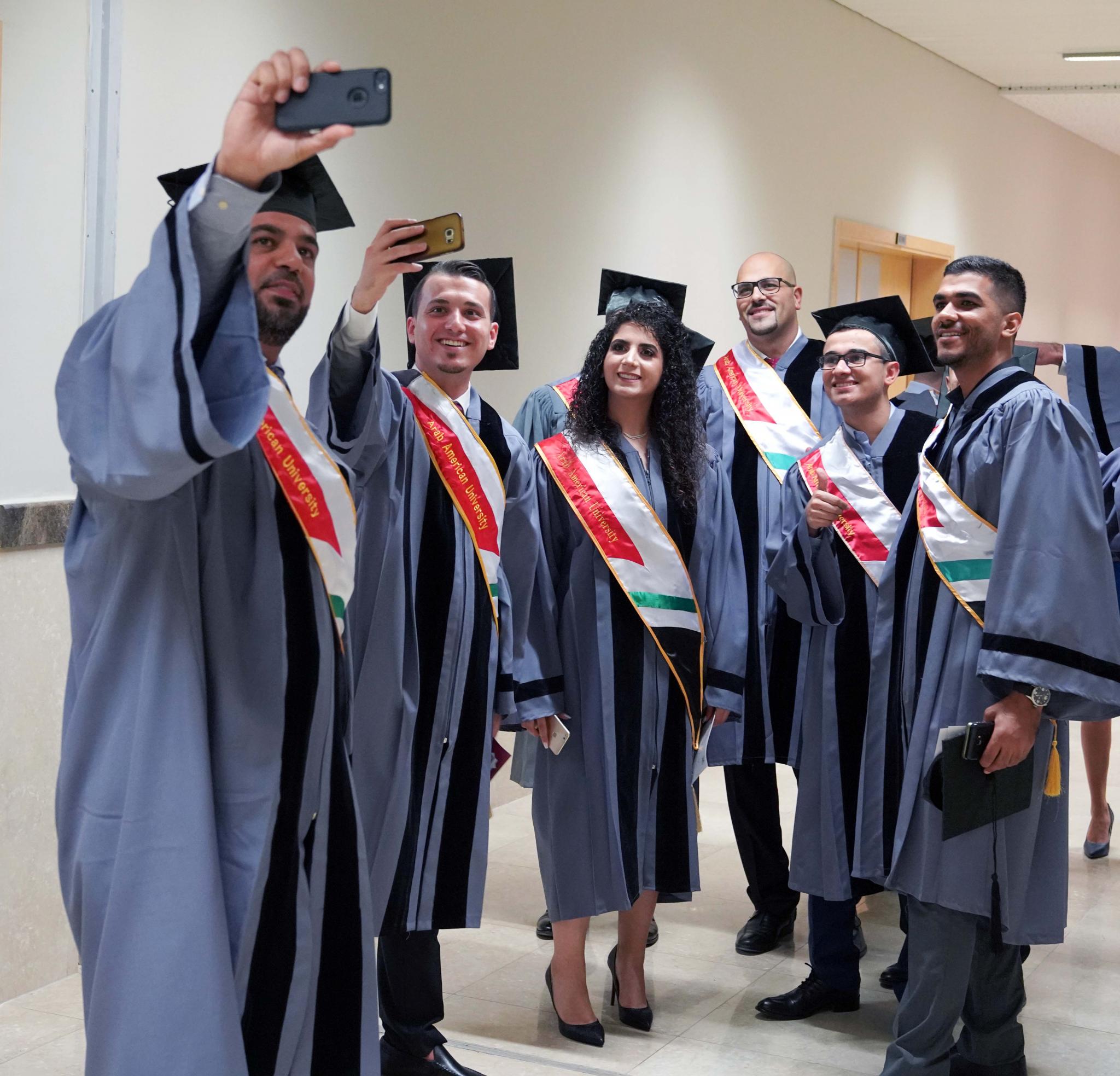 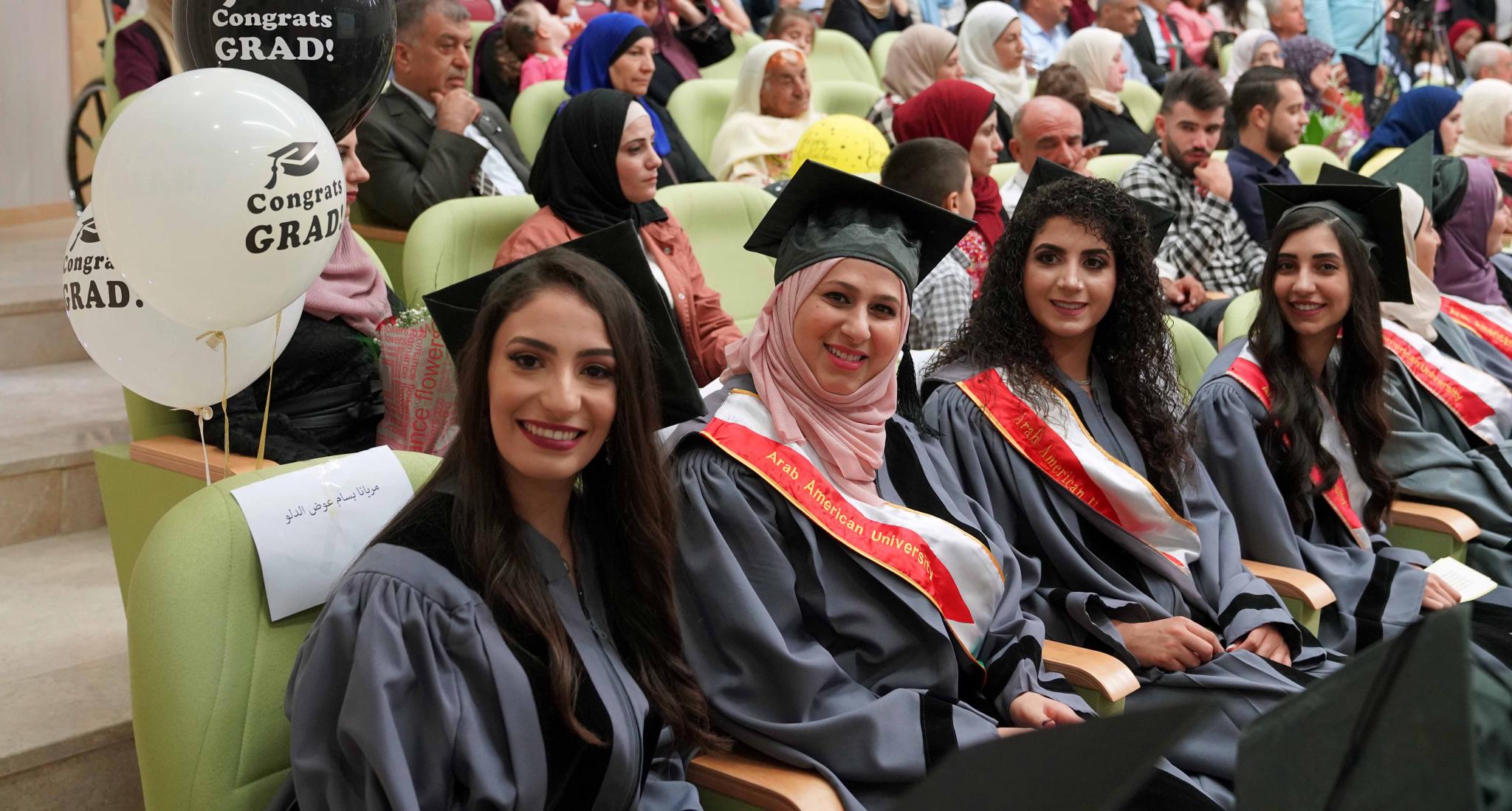 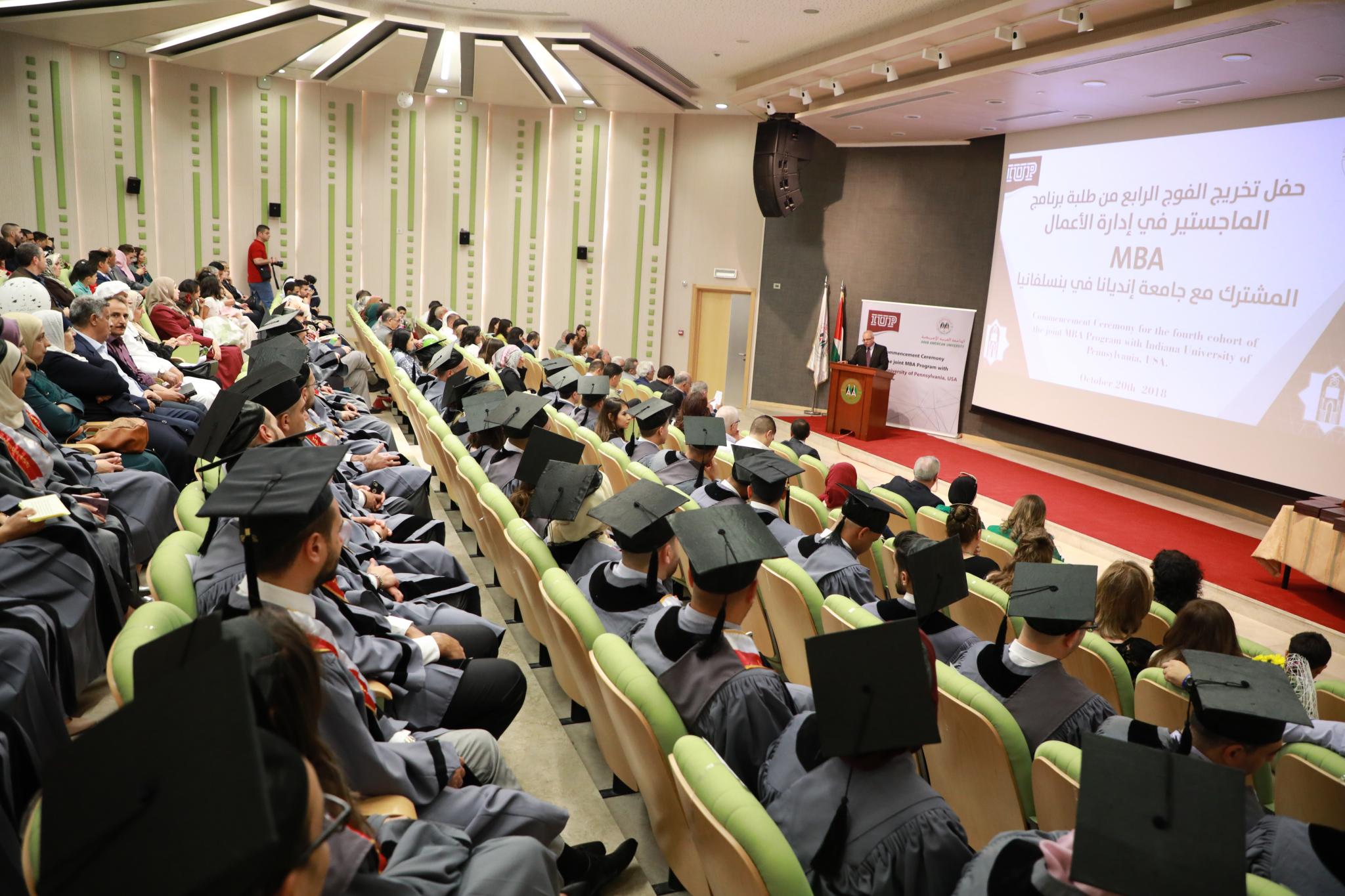 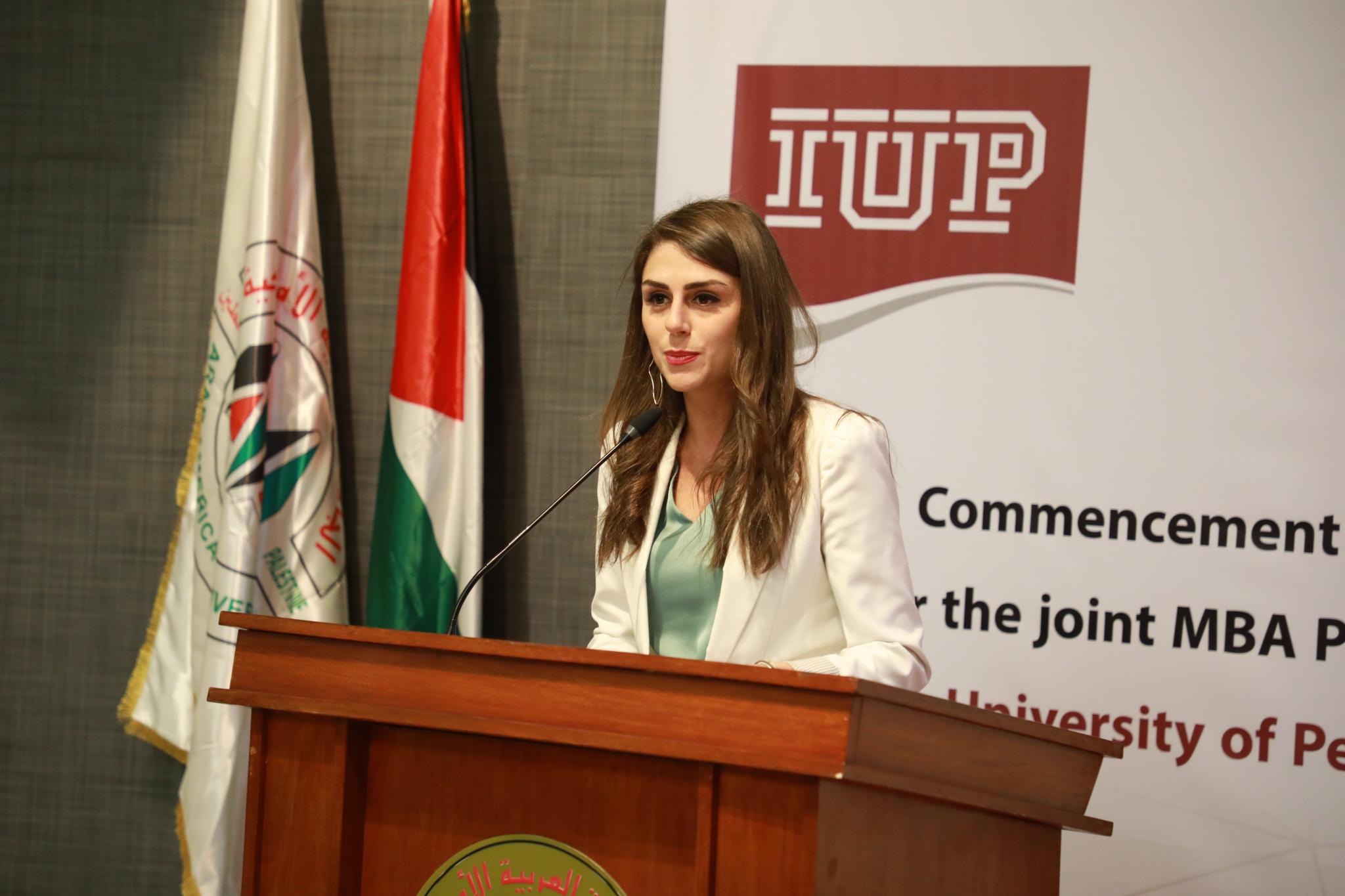 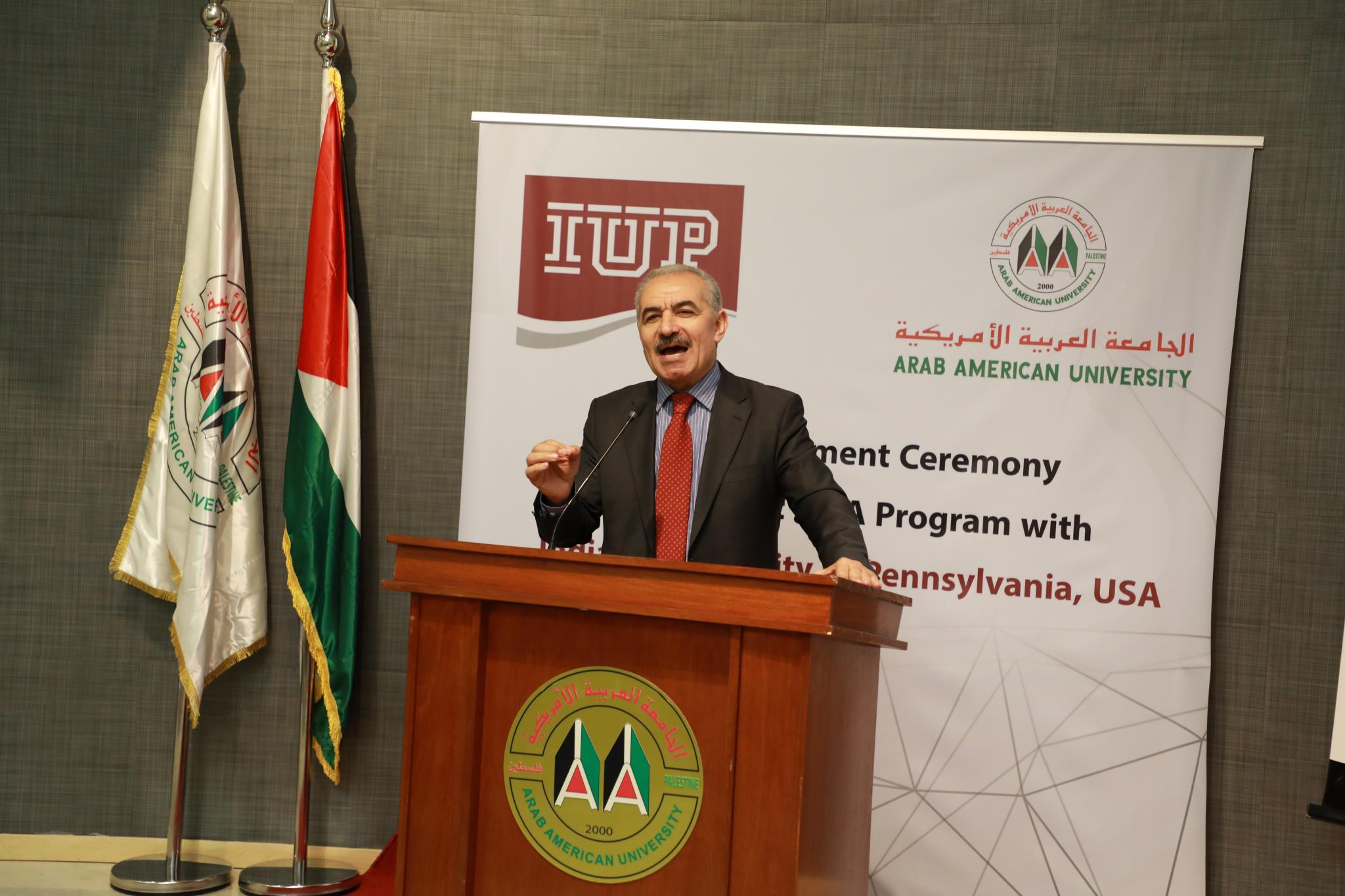 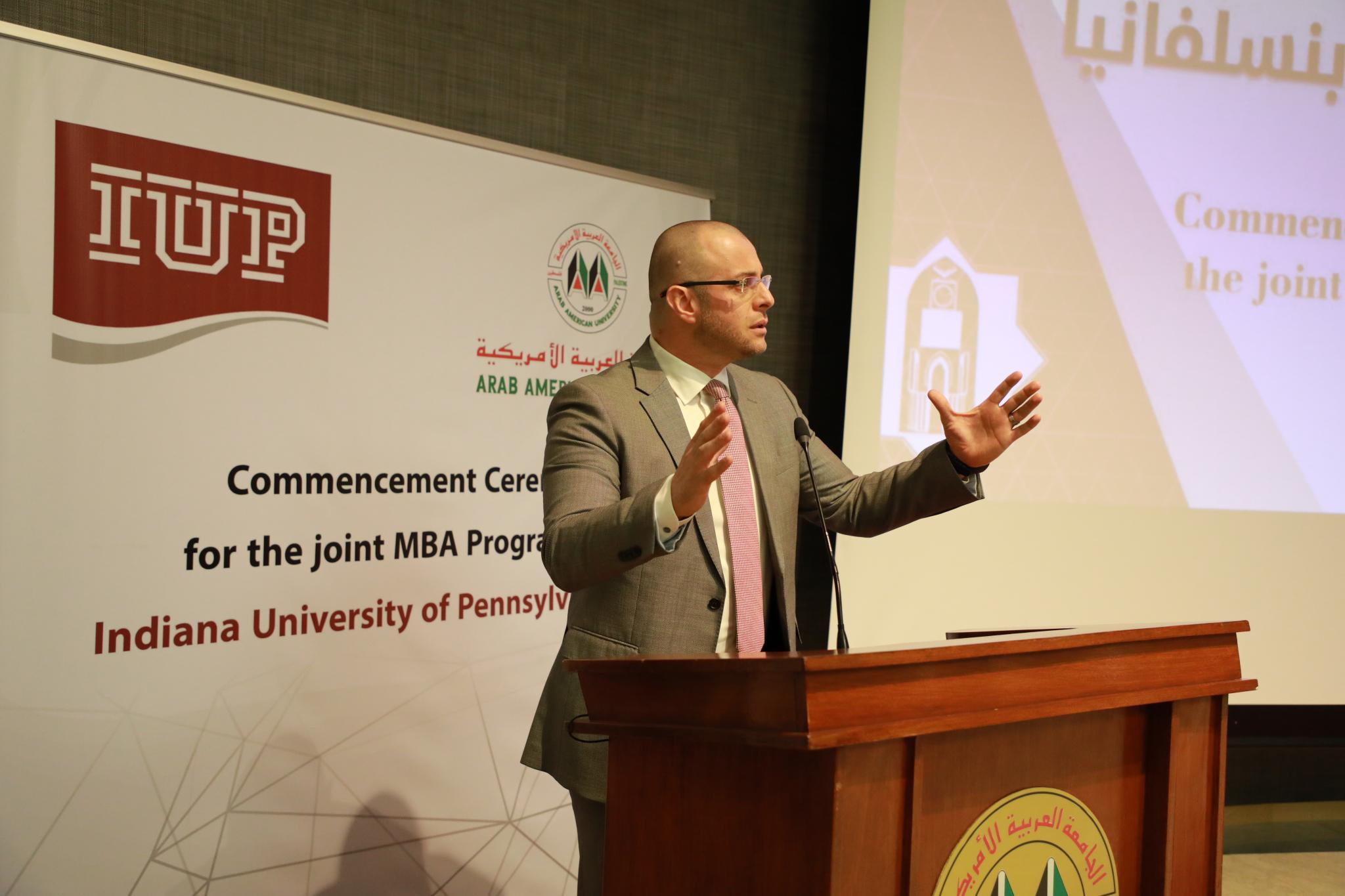 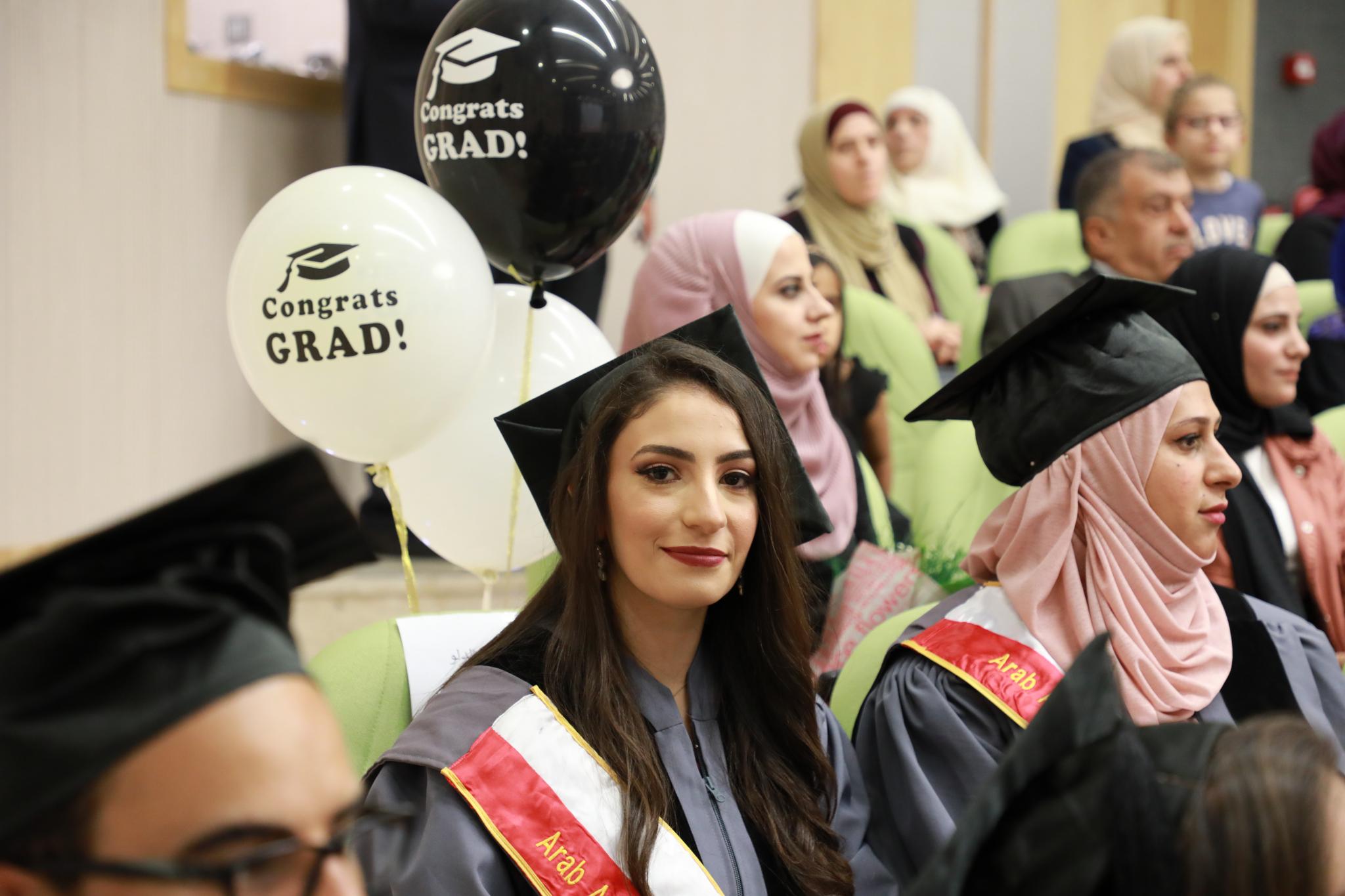 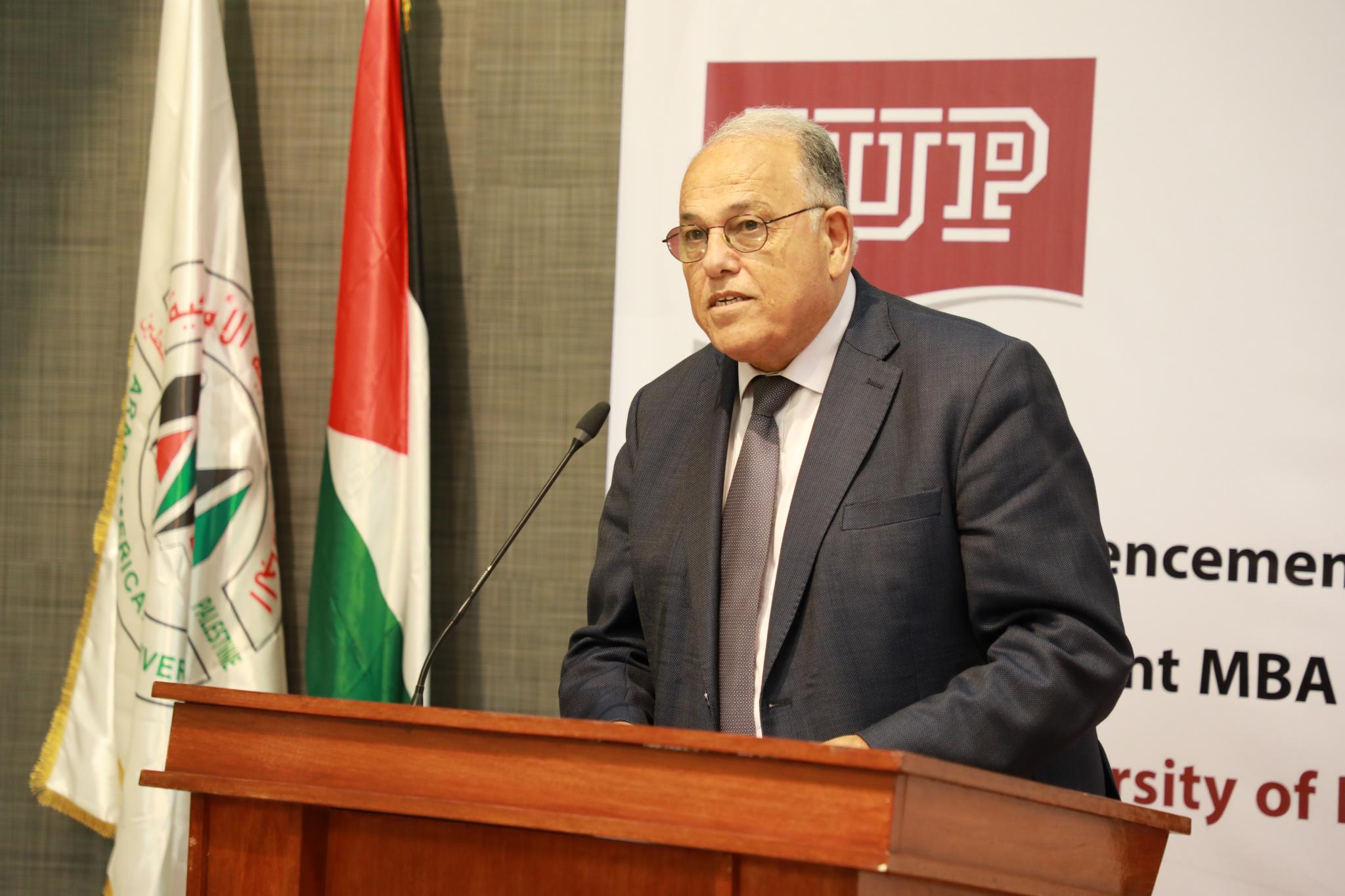 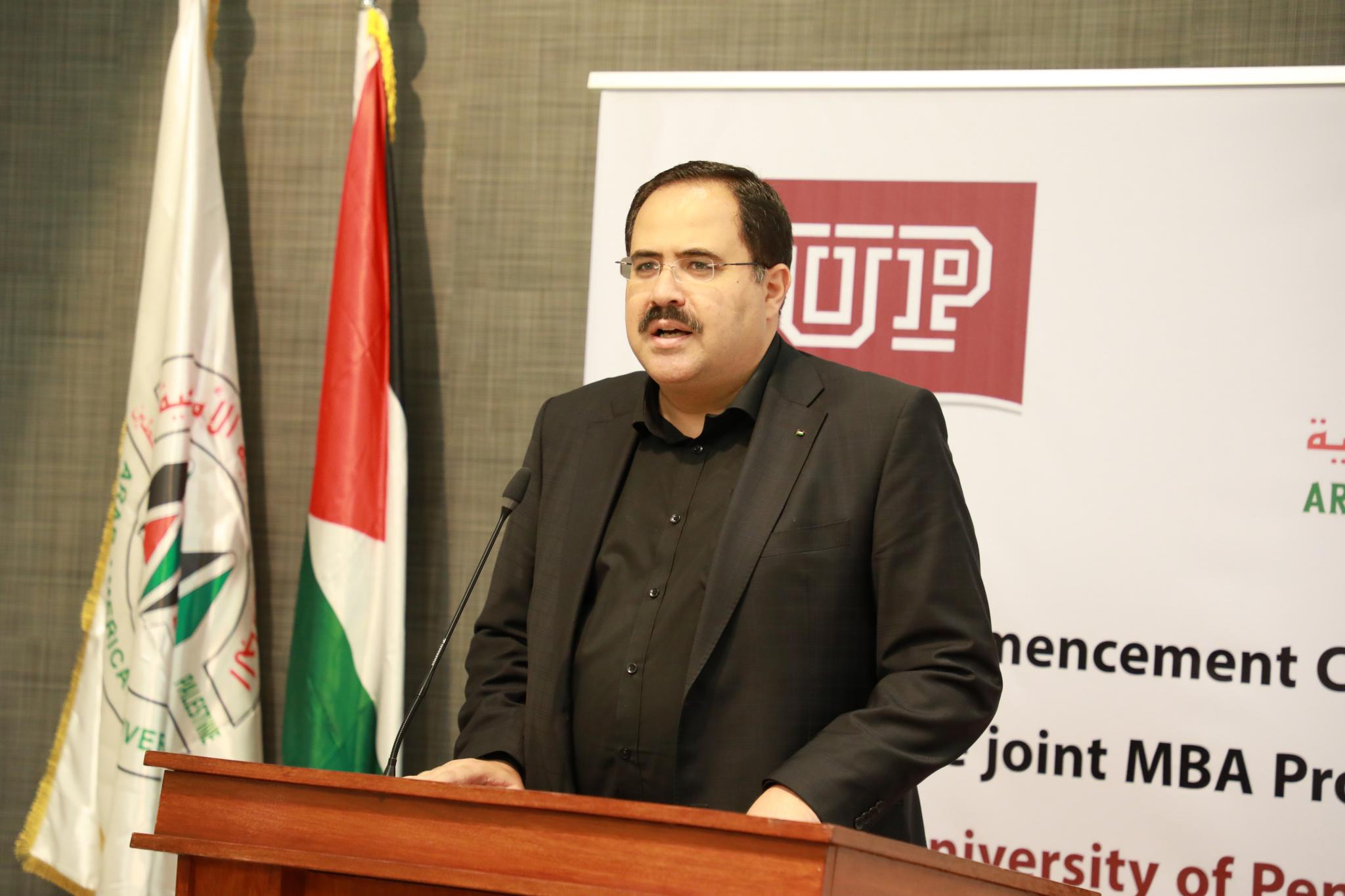 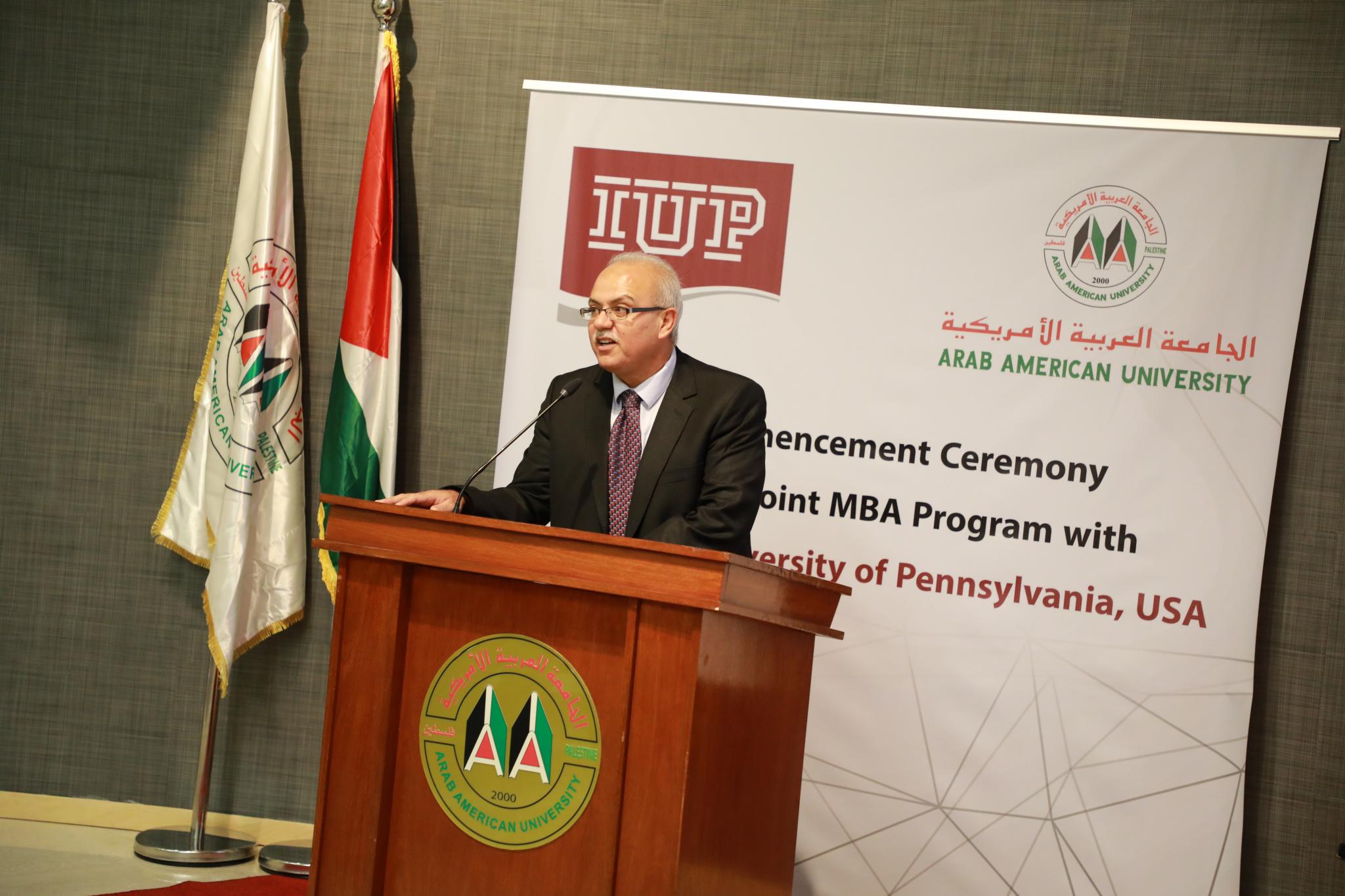 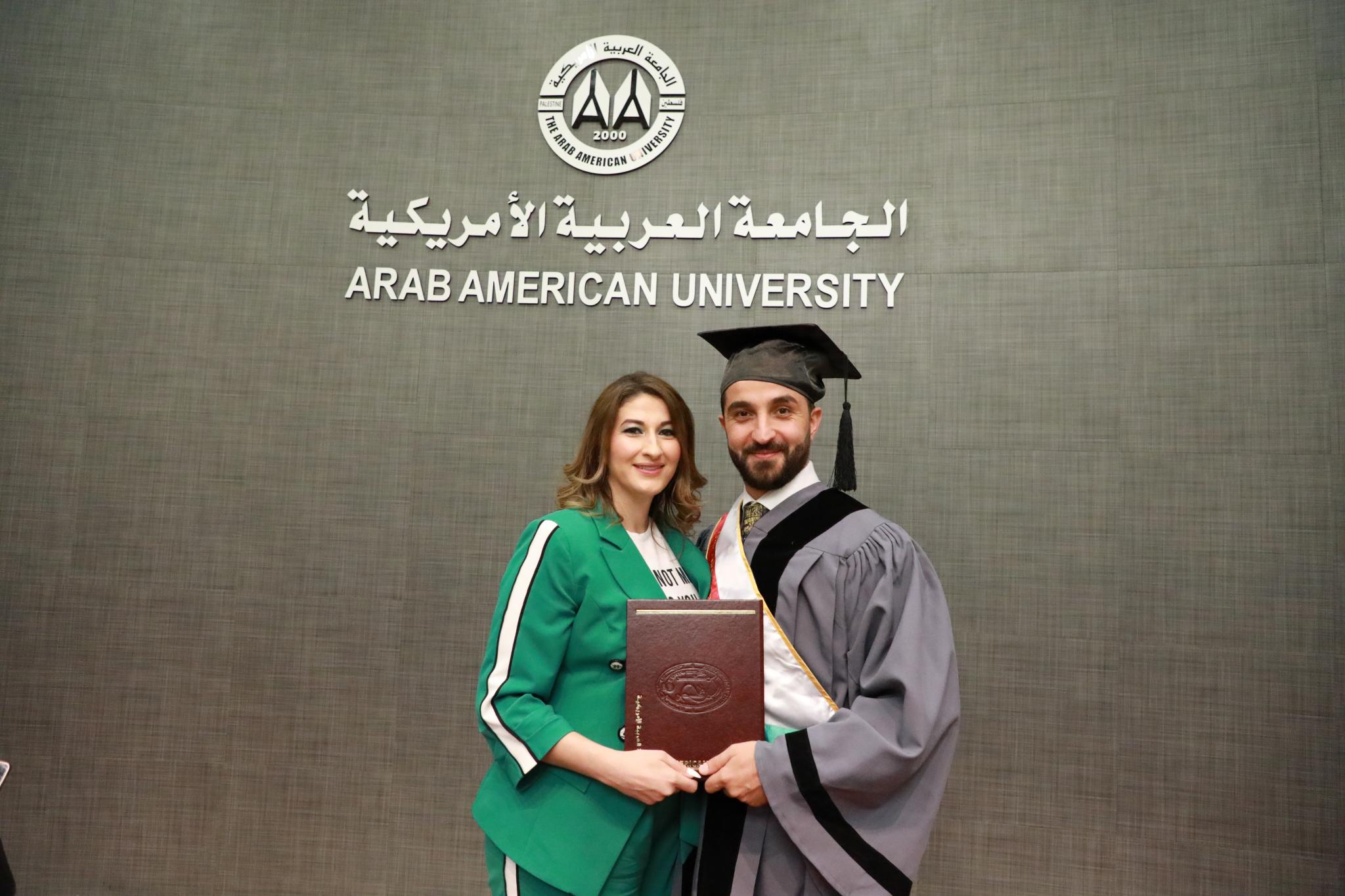 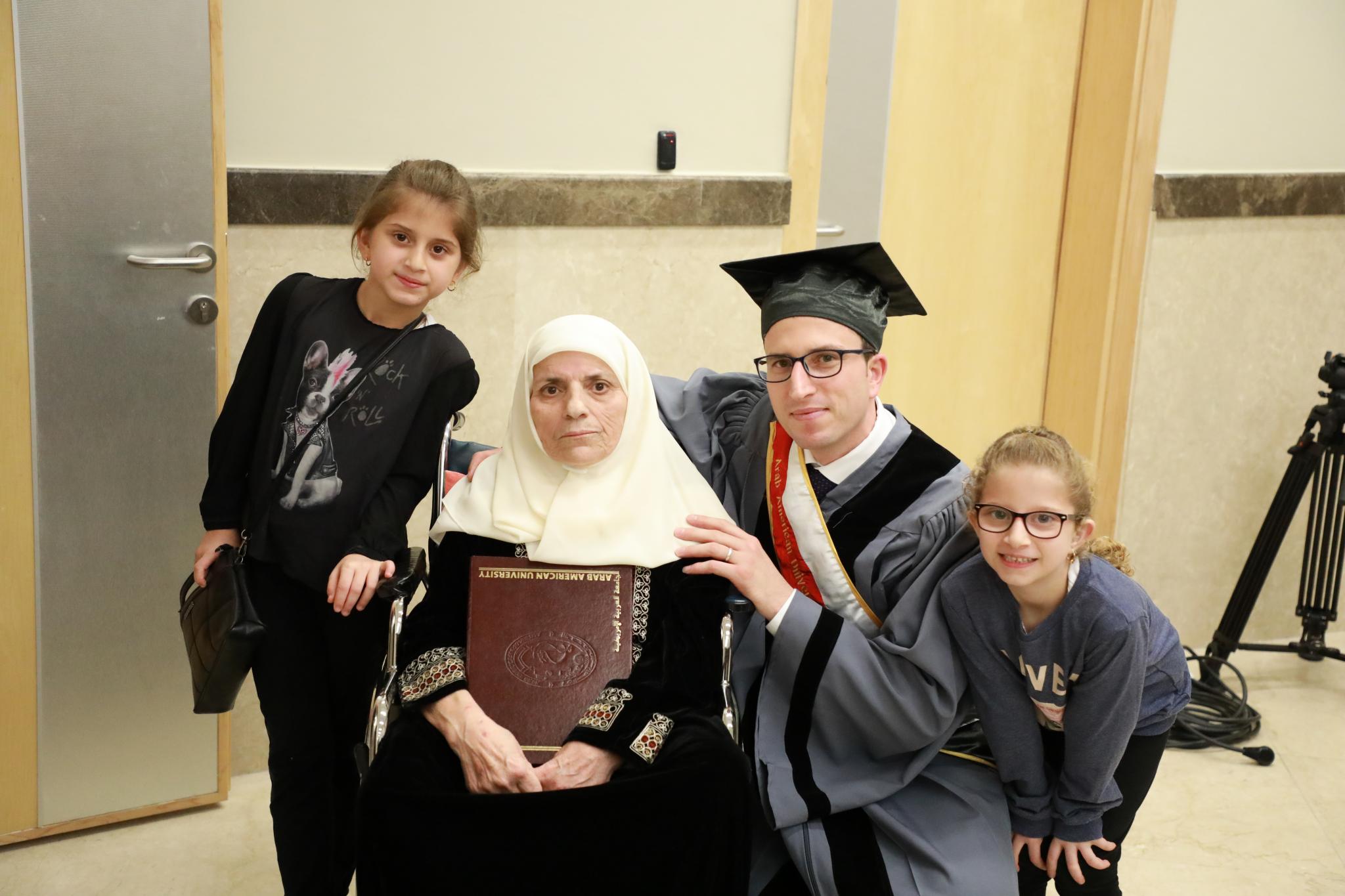 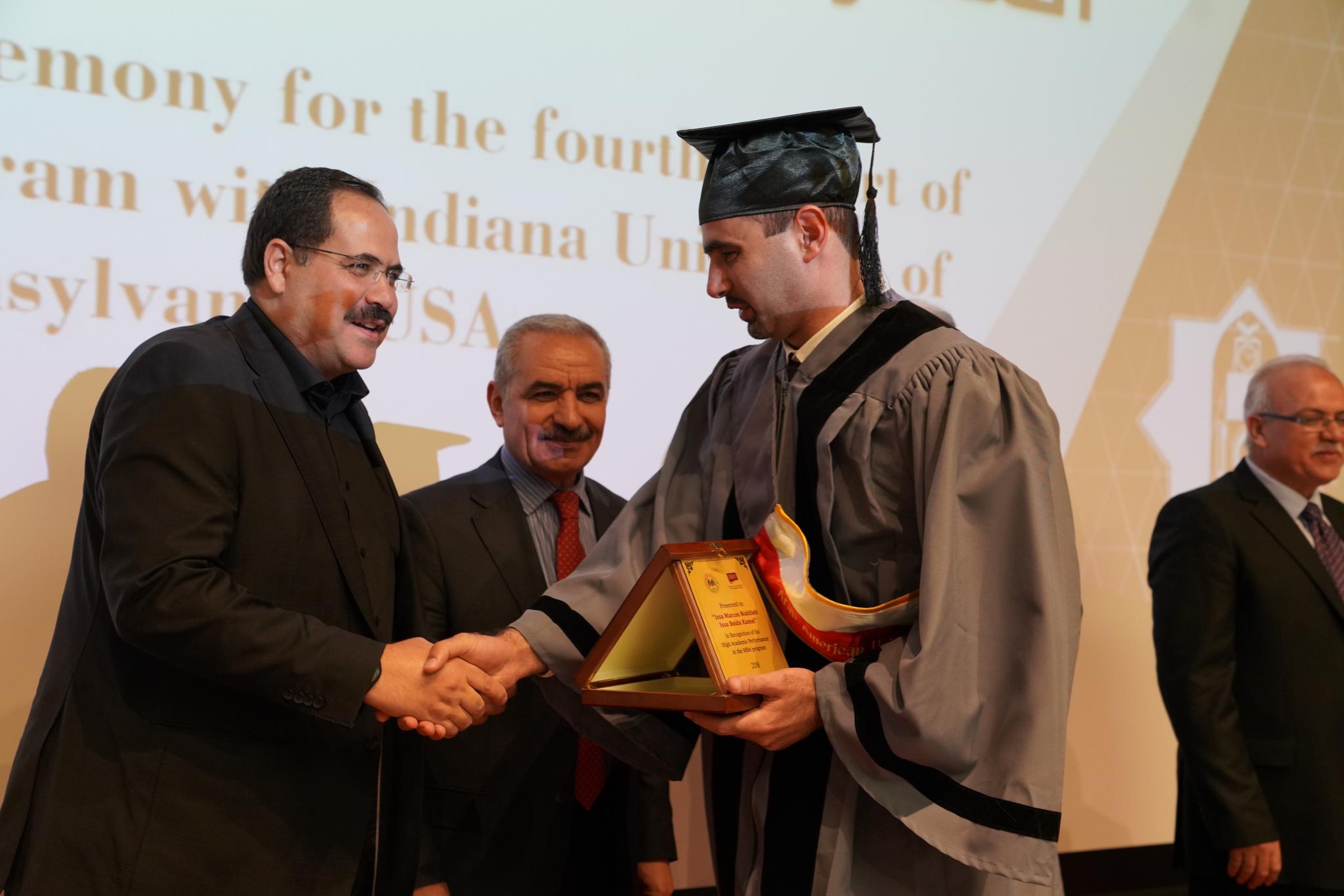