The University Holds a Seminar on Geographical Names in Palestine 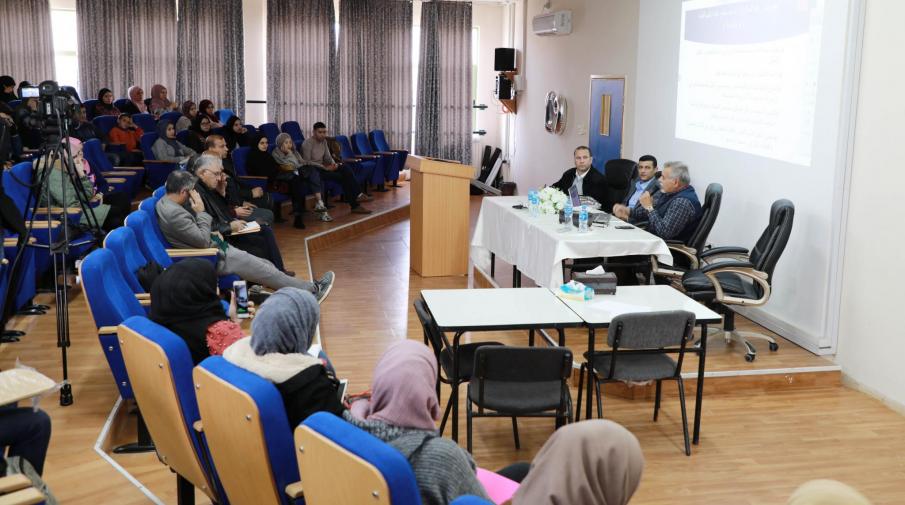 The seminar was opened by Dr. Faisal Sabah Head of the GIS Department at the University. The seminar emphasized the importance of this seminar in enhancing the students' knowledge of the importance of geographical names in Palestine and linking them to GIS systems and their future role in harnessing what they learned in the service of this important sector in Palestine. Which expresses the identity and belonging since the adherence of the names is part of the adherence of the land and history.

He added that the occupation authorities have tried to obliterate all traces of the Palestinian Arab identity in the country and the connection of Palestinian people to their lands by changing the names of hundreds of religious and archaeological sites, streets, neighborhoods and historic buildings, in addition to the names of lands, hills and mountains especially in Jerusalem and gave them Hebrew and biblical names of Israeli leaders that have nothing to do with these places and distributed the Palestinian territories with settlements and bypass roads which became Hebrew names, this poses a very serious challenge not only to the Arab Palestinian presence in the country but also to the nature of civilization and historical memory

Dr. Freihat pointed out the importance of the names of places and geographical features, assuring that it is the historical identity of the place and the clear indication of its cultural identity, which must be preserved and entrenched as it carries in its contents and implications a clear reflection of the cultural heritage for the Palestinians and the ancient connection with their homeland throughout history.

The Acting Director of the Palestinian Geographical Center at the Ministry of Transportation and Communication, and member of the National Committee for Geographical Names Mr. Bashar Hamayel, confirmed that the committee began its work from the Ministry of Planning and at the time it was on English maps issued by the British Mandate government before the occupation of Palestine in 1948, The team assigned at that time collected the names from the English maps and computerized there was about 25 thousand name, and doing work fields to the places and sites in all regions, and after the abolition of the Ministry of Planning the file of geographical names moved to the Ministry of Education Which was added to the Geomolg system, and then in the National Committee we checked the names by word and meaning.

He warned the Palestinian citizens inadvertent of transferring the Israeli names to instead of the Palestinian names, assuring that this has very serious consequences towards the Palestinian cultural heritage and the Palestinian places and presence. He explained that the committee is in the final stages of producing the Atlas, which will contain 20,000 names. As he assured that universities are one of the most institutions that we must work with in this regard because it brings together all Palestinian citizen and the ability to communicate with the university students to check the names and adding new ones.

The Atlas will be distributed to all international institutions and bodies, especially the United Nations to establish and strengthen the Palestinian right to the names of places, villages, mountains, valleys and historic places in Palestine.

At the end of the seminar, many questions were raised regarding geographical names and the mechanisms of dealing with the occupation, which seeks to falsify, distort and steal names and call them Jewish Israeli names.