The University Hosts the Book Publicity Ceremony of "the Diplomacy of Siege" by Dr. Saeb Erekat

Arab American University hosted a ceremony where Dr. Saeb Erekat Secretary of the Executive Committee of the Palestine Liberation Organization (PLO), announced the publication of his new book "The Diplomacy of Siege"/ The siege of the martyred President Yasser Arafat. 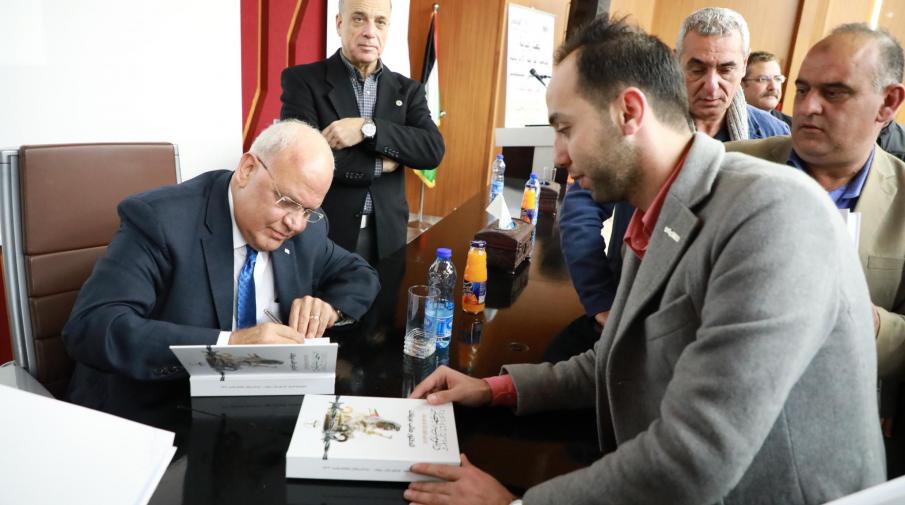 The university hosts the Book Publicity ceremony of "The Diplomacy of Siege" by Dr. Saeb Erekat

The ceremony was sponsored by the National Bank and attended by representatives of official and popular institutions, leaders of the security services and a group of university students, and Palestinian writers

The book contains 578 pages medium size book and is a crucial document with ten chapters about the correspondence, negotiations and meetings that took place during the siege of the martyr Yasser Arafat in the province with all the relevant parties and provides a deep reading during that stage.

In his speech, the Vice President for Academic Affairs Dr. Zaki Saleh conveyed the greetings of the President of the University Prof. Ali Zidan Abu Zuhri. "Today we celebrate the launching of the book “The Diplomacy of Siege” published by Dr. Saeb Erekat, which constitutes a new theory in negotiation and diplomacy. There is no doubt that the writer Dr. Saeb Erekat has focused on the Palestinian national consensus on the approach of the leader Yasser Arafat and avoid the internal differences that do not serve the national cause.

The Governor of Jenin Major General Akram Rajoub said in his speech that Dr. Saeb Erekat speaks in his book the Diplomacy of the siege of an exceptional figure in the history of Palestinian people, the late martyr Yasser Arafat, who built from the beginning of the Palestinian revolution many strategies that are challenging for other leaders and world leaders to build and establish. He added that Yasser Arafat, the one of the first bullet and the detonator of the modern Palestinian revolution, contributed to the return of the Palestinian cause to the international arena and revive it in the minds of the Palestinian people, where the occupation bet that Palestinian adults will die and the young will forget their issue. Also the values ​​of unity and love, when he was talking about the problems of students, the problems of mothers and the problems of the poor, he was familiar with all the details, he contributed to developing solutions as he contributed in the establishments of institutions and ministries that take care, follow up and address the concerns and problems of citizens, this is Yasser Arafat, who must remain immortal within us. "

Professor Nafez al-Rifai, head of the Palestinian Writers Union, stressed that the book is a valuable political book, that documents the important historical stage that lasted for four years from 2000 to 2004 until the departure of the martyr leader Yasser Arafat. He explained that if the book contained more details it would have been an encyclopedia, but it was placed in ten chapters, even he had pressed some meetings in a number of lines only, and the question here was whether Saeb Erekat was a historian or a solution maker, and has become aware of what this Israeli occupation and how to deal with it.

In his speech, Professor Nihad al-Beqa'i a writer, researcher, cartoonist and director of Dar Al-Arkan for production and publishing in Acre, said:  In the book “The Diplomacy of Siege” has a strong answer to the extent of circumventing the national project. This answers that the extent of steadfastness and challenge presented by the Palestinian decision-maker in general and Yasir Arafat in particular, where there is no dispute that Yasser Arafat is more than proficient in the art of maneuvering in the fields of politics and mastered the art of possible in the atmosphere of impossible, but he mastered the most steadfast art in the fields of reality and the corridors of diplomacy, especially in his final scene of his life.

In his speech during the ceremony, Dr. Saeb Erekat reviewed the chapters of his book highlighting its stations and narrated some stories about the meetings that were taking place between the Palestinian, Israeli and American sides and the positions of the late President Yasser Arafat and his steadfastness in all stages until his siege and murder.

He added that those who want to defeat terrorism must end the Israeli occupation of Palestinian land because terrorism and occupation are two sides of the same coin where it oppressions the peoples, bloodshed, violence, injustice, threats and intimidation, and kills the dreams and hopes of the people.

Dr. Erekat said that the United States of America as the greatest and largest country in the world, must be responsible and respect the will of the people and stand in fair positions with the rights of the oppressed peoples and that the White House needs men of state and not men of real estate and Palestine and Jerusalem is not a real-estate for sale, waiver or compromising. The Palestinian leadership and the Palestinian people will not accept a state without Jerusalem as its essence and capital.

He also called on Hamas to end the division and achieve national unity on the basis of the Cairo agreement. "When we disagree, we go back to the ballot box and not to the bullet box in reference to the Hamas takeover of Gaza," he concluded. "God honored us for being Palestinians defending our land and our holy sites. " 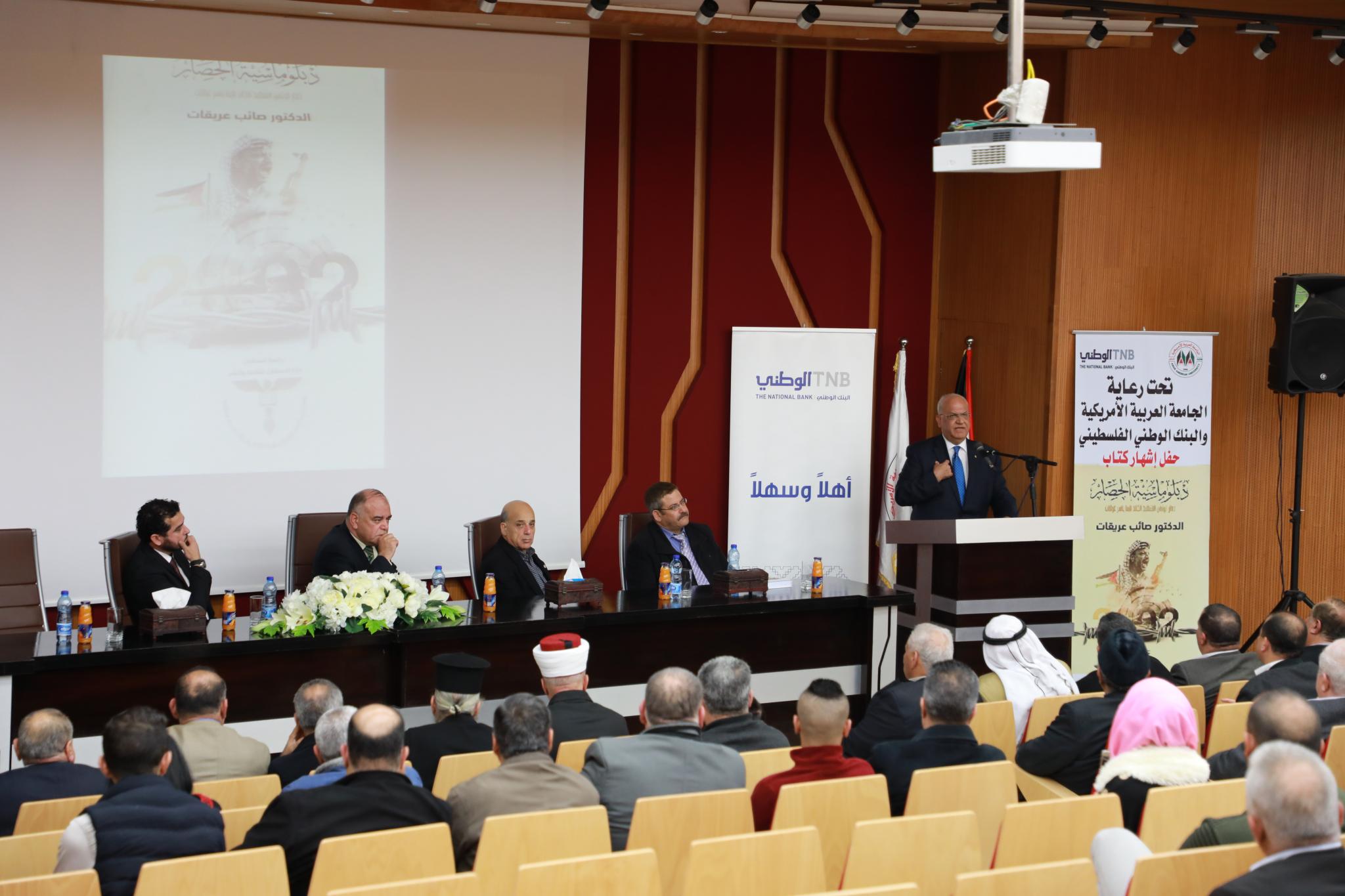