The University Hosts German Expert in Media and Social Media

The Arab American University Ramallah campus hosted the German expert Christoph Dinkelaker in Media, social networking websites and Middle Eastern Studies in a lecture for students of the Comparative Peace Processes and Peacebuilding course in the Master of Conflict Resolution and Development Program. 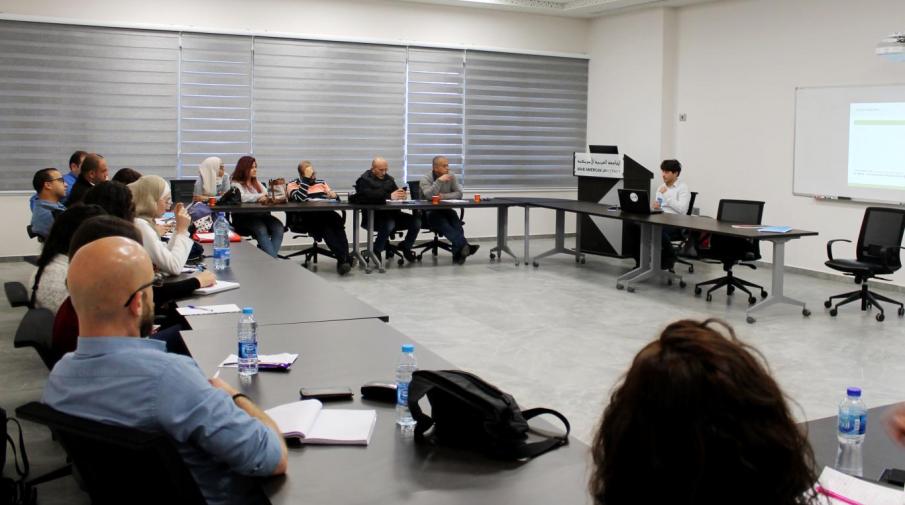 Part of the lecture

The course instructor Prof. Dr. Ayman Yousef, Professor of Political Science and Conflict Resolution at the University, welcomed the German expert. Pointing to the importance of direct face-encounters with national and international expertise, as they have a positive impact on the students' rationality of thinking, broaden their horizons in knowledge and scientific research.

The expert talked about the general features of the Western media coverage including online ones covering events in the Middle East and the Palestinian-Israeli event scene in terms of form and content. Christoph pointed that the European centrality overwhelms the Western media, especially in dealing with East, Arabism, Islam and Palestine’s issues, and its viewed based on European perspectives of narrow interests and considerations rather than being an attempt to promote the issues of justice, equality, development, fair rights and self-determination rights, including the right to freedom, Social and national liberation.

He added, there are stereotypes and prejudices noticed by observers and specialists in Western media, especially when it comes to Iraq, Iran, Palestine and other Arab countries where stereotypes prevail over the region and those countries in favor of Israel, which promotes the Western media as if it’s a democratic phenomenon in a dark environment. Pointing, in the absence of real images that reflect the people’s suffering, especially in conflict and war areas like Palestine was because of focusing on major strategic issues, most of which were political and dominated the social, economic and daily life issues.

Christoph stressed on the importance of working to activate citizen's press, field work and caring for daily life issues and the daily suffering of the general public to reach balanced realities in a world dominated by strength and pragmatic interests prevailing in the relations of States together.