The University Hosts the National Championship for Kids in Kung Fu 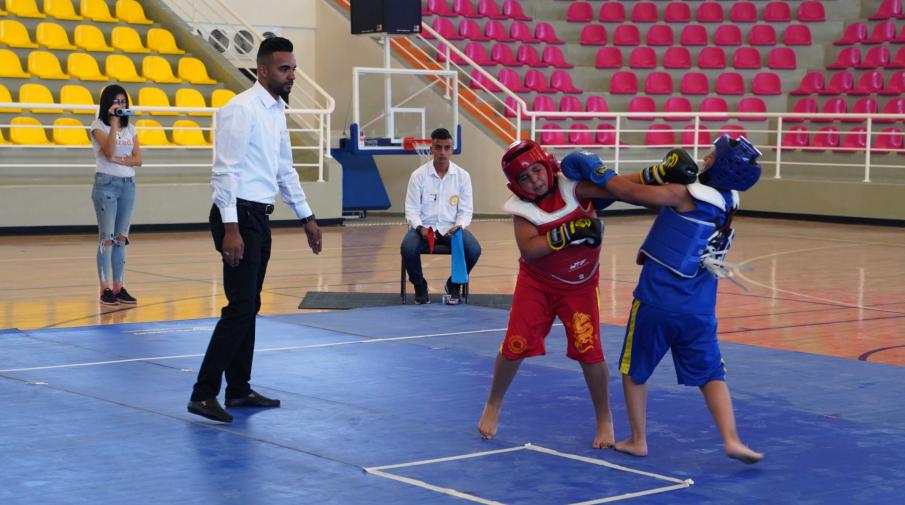 Part of the championship

The match started with the entry of 16 judges and 13 teams from all around West Bank, then sang the national anthem and read Al-Fateha on the memory of the souls of the martyrs  then said the championship oath and judges oath.

The president of Palestinian Kung Fu Association Mr. Hussain Al-Khateb said that this championship held within the annual agenda of the association. Where the teams are competing in the classification of the provinces and regions throughout the year to win the national championship, pointing out that the mechanism of playing in this match is fighting competitions on the ring according to the games standards and methods adopted for international competitions.

He also thanked the Arab American University for harnessing its sports facilities to support the various Palestinian sports. As he added that the Association has participated in the Olympic week in the opening and closing ceremonies held in April this year. Praising the efforts of this national academic edifice in supporting various sectors of Palestinian society, academic, culture, and sports.

For his part, the Director of Sports Facilities at Arab American University, Mr. Udi Darghma expressed his gratitude to the Palestinian Association of Wu Shou Kung Fu for choosing the university sports hall to organize this match, assuring the University's support for all sports games where these facilities were set according to international standards, pointing out that Kung Fu championship  is the first of its kind in North West Bank, and expressed the University's readiness to cooperate with all sports Unions for individual and group games.