Organized by the Ministry of Culture 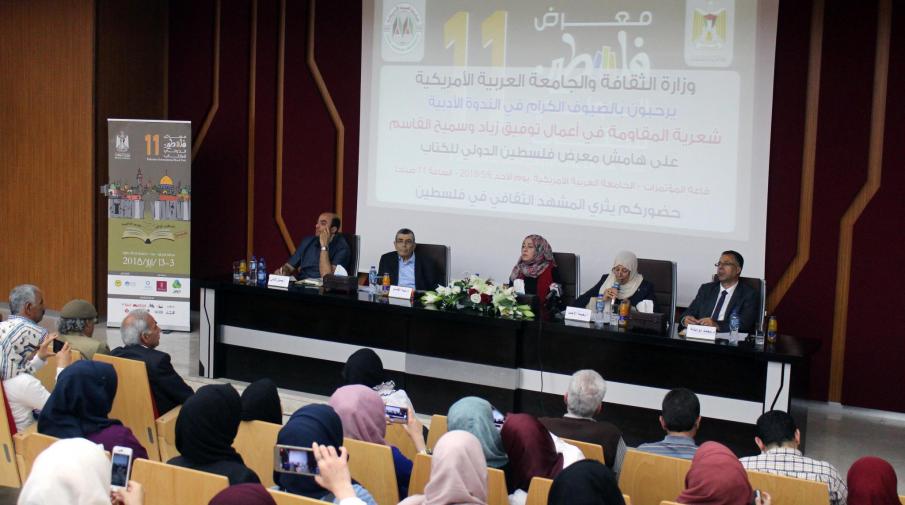 The session, which was hosted by Chairman of the Arabic Language and Media Department at the Arab American University Dr. Mohammed Abu Al-Rob was attended by Arabic Language Lecturer at Arab American University Dr. Mahmoud Dawabsha, Acting Director of the Minister of Culture Office in Jenin Amal Ghazal, poet Naima Al-Ahmad, writer Dr. Nabeh Qasiem, writer Jamil Kettaneh, and the Iraqi poets Adnan Sayegh and Rushdi Khayoun, the members of the Ministry of Culture in Ramallah and Jenin, members of the academic and administrative bodies and university students.

The Arabic Language Lecturer at the Arab American University Dr. Dawabsha presented the poets Ziad and Qasim, stressing that the university open its doors to all cultural activities and events to improve the cultural scene.

As for the Acting Director of the Ministry of Culture in Jenin Amal Ghazal, she thanked the Arab American University for hosting this important symposium especially as it addresses two poets who played a major role in the struggle of their people.

The poet Naima Al-Ahmad, the writer Dr. Nabih Al-Qasim, and the writer Jamil Qataneh spoke about Ziad and Al-Qasim's poems, their literature and struggles, the characteristics of their poetry with its purposes and style, and how they influenced the Palestinian people.