AAUP President Prof. Ali Zidan Abu Zuhri, honored the student researcher specialized in the master program strategic planning and fundraising Ghadeer Khalil, who won first place in the master category of national competition "University Student Researcher" for year 2018. The competition was organized by the Ministry of Education and Higher Education where students and researchers from various universities participated in. 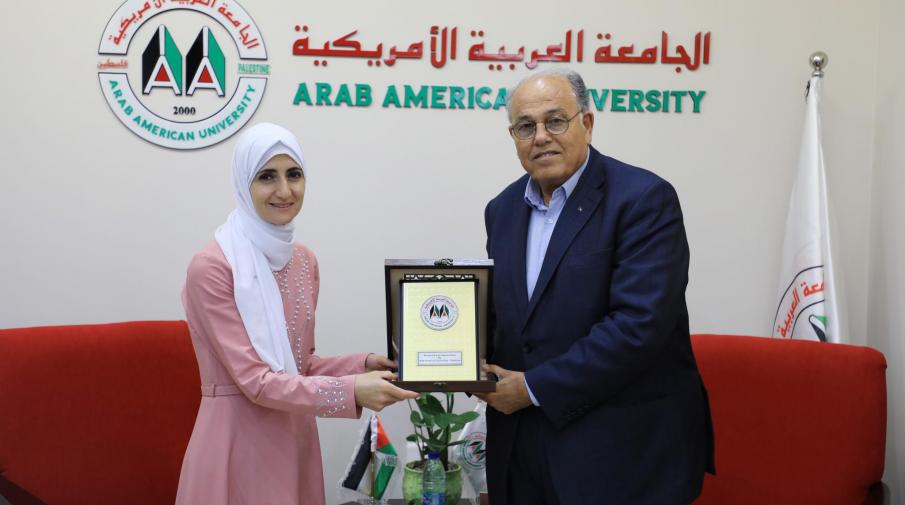 During the honoring, which was attended by the Dean of Scientific Research Dr. Mahmoud Al-Manasrah, Prof. Abu Zuhri congratulated the student Gadeer Khalil and said "The university is proud of its students and researchers as it harness all its potentials to encourage the continuation of such achievements and enhances scientific research in all specialties, and to carry out vital researches, so it can become a positive effect, and a national reference that develops solutions to all problems and develop a civilized society in Palestine".

As he added, that he is very proud today to honor a hard worker and distinguished researcher that was able to succeed in winning this award and provide a research that influences the Palestinian culture and show the development in the culture of the student Palestinians.

The student researcher Ghadeer Khalil thanked the university for their support. Adding that she will always be grateful to the university, that she chose to be her first step towards excellence and future.

She stressed that her research, entitled "The prevailing local culture and its relation with the effectiveness of strategic planning in Palestine". To be the first research in this trend in Palestine to measure the variables of cultural dimensions that exist according to Geert Hofstad's theory of cultural dimensions. To identify the prevailing culture in Palestine, and to integrate these variables with the effectiveness of strategic planning. She also pointed out that the results showed that Palestine is characterized moderate between male culture and female cultural, which distinguishes Palestine from all other Arab countries, where the results showed that other Arab countries are based on patriarchal societies.

According to researcher, the study showed that the percentage of respect and appreciation for officials in Palestinian institutions and families reached 45%. This confirms that employees have no fear in sharing their ideas and participating in planning and decision-making.

The study, which included 121 employees from the private, public and civil institutions, succeeded in explaining 75% of the relationship between prevailing culture dimensions in Palestine and the effectiveness of strategic planning. The aim of the study is to provide advice, guidance to officials and decision makers to take in consideration of the prevailing culture dimensions in Palestine to ensure the success of future strategic plans.

A Recent Survey Study by the Poll Center in AAUP: The Palestinian People are Far from the "Herd Immunity"
04 Aug 2020