Dr. Saba’ Jarrar from the Department of Sports Science at the Arab American University, participated as Palestine representative in the annual Drassa Forum of sports sciences, held in Casablanca, Morocco recently in partnership with the Association of Moroccan Journalists. As a keynote speaker at a forum on “Sport as a Soft-Tool to Improve and Achieve Sustainable Development,” (Drassa: A Research and Development Academy for the UAE Sports Science Activities) 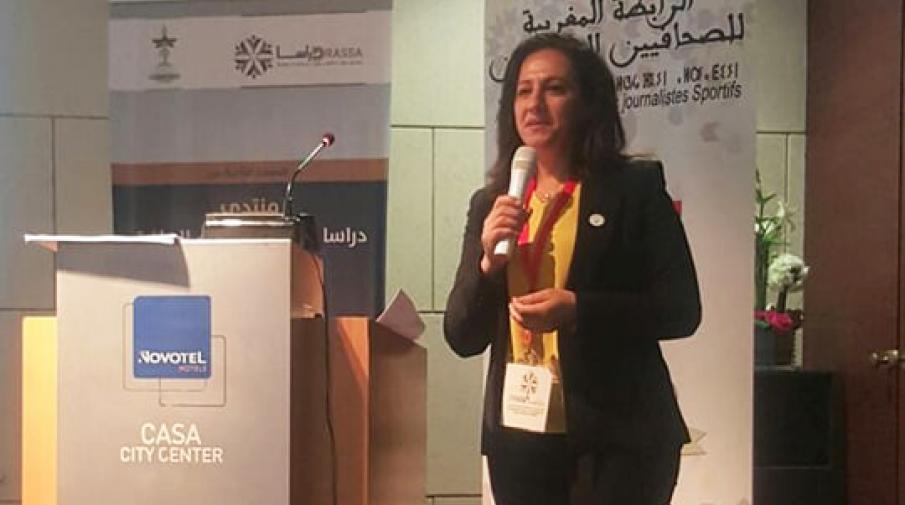 Dr. Saba’ Jarrar during her participation as Palestine’s representative in the Drassa Annual Forum for Sports Sciences

Dr. Jarrar mentioned the UN resolutions that emerged and evolved from the international organizations on sustainable development and social responsibility since 1989, embodied in the eight UN goals of the 2000 Plan. Thus developing the seventeen objectives adopted in 2015 for their 2030 Sustainable Development Plan and the United Nations role by announcing sport as a tool for community development and peacemaking through a 2016 decision that said it is a mean to achieve 2030 sustainable development goals.

Also presented a vision of how to enable sports to play this role and the success elements it has as a tool for change and influence in societies, this stems from the concept of the power of playing with the inherent and acquired side of sports as a human activity. Jarrar concluded with some Arabic and Local programs that support sport as a social responsibility tool in Palestine and the Arab world.

Jarrar presented few recommendations to the Forum, the most important was to consider sport a strategic tool for achieving national plans for sustainable development consistent with 2030. Along with adopting the Arab American University's experience by offering Sport for Community Development course as a tool for sports empowerment and ability to change, and choose the Arab Organization for Community Responsibility objectives for joint Arab action.

Dr. Jarrar participation got the attention of specialized journalists who attended the forum. So she was invited to participate in Darasa Board of Directors’ meeting, which discussed the sports and sports media issues. After the forum sessions, the Academy invited her to join Derassa’s Directors Board, which discussed the academy’s upcoming plan and applying a series of administrative changes, most notably asking Jarrar to join as a board member.