The President of Arab American University Prof. Ali Zidan Abu Zuhri, welcomed a delegation from the Jordanian field hospital in Jenin, who visited the university as they discussed the means of joint cooperation between the two sides. 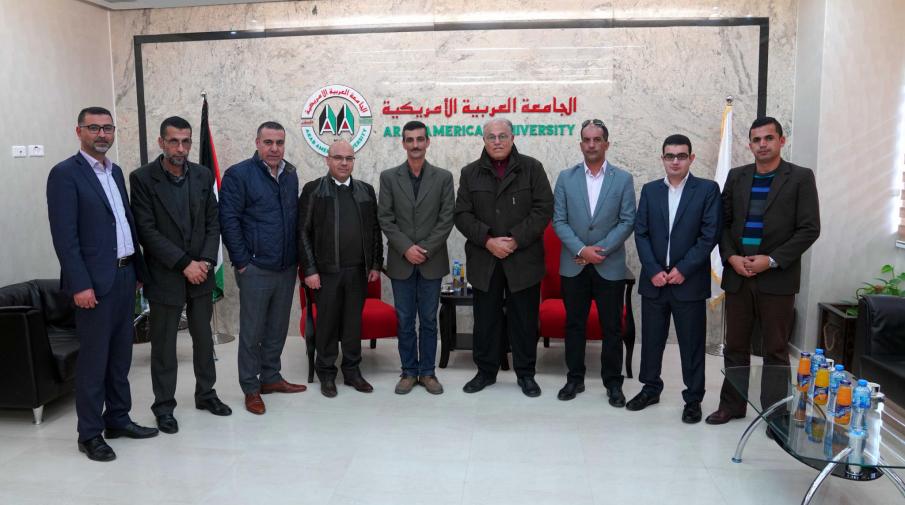 The delegation included the commander of the pilot station Salim al-Batush, the liaison officer, 1st lieutenant Amer al-Matar, and the technical station director 1st Lieutenant-Colonel Dr. Hadeeb Sawalha. They were accompanied by the Colonel in the Preventive Security Service Bilal Zakarneh, they were welcomed by the Vice President for Administrative and Financial Affairs Mr. Faleh Abu Arhra, the Dean of Student Affairs Dr. Bashar Daraghmeh, and Public Relations Manager Mr. Fathi Amor.

Prof. Abu Zuhri welcomed the guest delegation and assured the deep historical relationship between the Palestinian and Jordanian peoples, appreciating the role of His Majesty King Abdullah II in supporting the Palestinian cause. He also gave a detailed explanation of the university and its academic programs in all degrees. As he assured the cooperation between Arab American University and Arab and international universities including the University of Jordan, expressing the University's readiness to cooperate with the Jordanian field hospital, contributing to the success of their mission.

During the visit, the delegation took a tour arround the university faculties, departments and facilities.