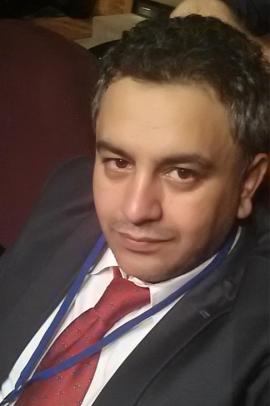 Ziad Abu Khaizran graduated from the Arab American University in 2003-2004 from the Professional Diploma program in Medical Tests with Honor.

In 2004, he started working in the Palestinian labor market different fields and encouraged by his professors to continue studying.

Abu Khezran worked at Razan Center for Infertility and IVF. Through the center he joined an educational program in line with his work. In 2007, he joined Al-Quds Open University in the methods of teaching science program to graduate in 2010 with good grade.

His dream didn’t stop here, as he wanted to progress scientifically and in his career. He felt he had great energy to use, so he joined the Polytechnic and Bethlehem Universities in a joint program on biotechnology in 2010-2011, and graduated in 2013 with a very good grade.

Abu Khaizran said his thesis “in master program” discussed mechanism of using biotechnology in existing investment projects and improve it. Pointing, he made this research due to the scarcity of agricultural sector researches and lack of interest in them especially cattle sector. He made a research on milk productivity in quantity and quality for Palestinian cows of all kinds by identifying the improved genes quantity and quantity through automatic milking and model farms. Noting, he succeeded at identifying the possibly responsible genes, and knowing appropriate ages for milking digitally and genetically. It was the Arab world first study relying on information analysis and published in international scientific journals in different languages.

Abu Khaizran was satisfied with his accomplishment, but he saw it as the beginning of his way into other achievements. At the same year, 2013-2014, he joined the doctoral program in the same specialization, got the American Board in fertilization and IVF and got both the US and European Fellowship for fertilization and infertility.

During his PhD, he published several topics, participated in international and local scientific conferences, and became an active member of the Palestinian Medical Technology Association.

In 2017, he finished the PhD program in Biotechnology from Baker Phil University, US. His thesis was about infertility gene in Palestine as it’s not common in Palestinian families, involving hearing loss diseases and chronic diseases. Noting that he is still looking into this Subject by analysis and writing.

“I aspire to achieve more, as my dream isn’t over and the story is going on hopefully to fulfill my goals. Thanks to everyone who supported my education and thanks to my first universities that still supports all its graduates to follow their successes and achievements. Thanks for the Arab American University’s attention” says our graduate.

You have to use all your energies and push it to achieve your dream. Success’ golden role begins with small achievements in a row to reach the one that everyone boasts. Don’t graduate from university unless you have set your goal and started seeking it.