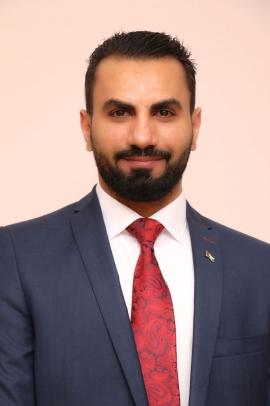 It has always been my dream to study a medical field. My family's desire and support encouraged me to pursue my dream, but my high school average didn’t qualify  me to enroll in any medical program in a Palestinian university and my family couldn’t afford to pay for my studies in other countries. I tried to  find another way to achieve my goal, without any financial burden on my parents.

In 2008, I joined the Physics Department at the Arab American University in the Faculty of Arts and Sciences. Then, in 2011, I graduated from the university and got my Physics degree with a cumulative average of 3.6 GPA. Then for my graduate studies, I enrolled in the Master Program of Medical Physics at the Malaysian University of Science and graduated with 3.5 GPA.

A glimmer of hope sparked when I worked for 3 years in a number of colleges and departments at Malaysian and Palestinian universities including the Departments of Medical Imaging and Physics at the Arab American University. During that time, I tried hard to pursue my dream. I had applied for a grant in several international universities to pursue my studies and waited impatiently for a positive response. But unfortunately, I only got rejections, yet I held to my dream and worked hard day after day despite the repeated rejections.

Then, with Gods help then my parent's consent, I was accepted to work as a PhD researcher in the Department of Medicine and Neurology at the Julich Research Center, one of Europe’s largest research centers. It has one of the world's largest nuclear reactors with advanced scientific researches facilities for health, energy, physics, environment, and climate researches.

Enrolling at the Arab American University to study physics was the first step towards achieving my dream. Although most people think that the only career on can obtain with a B.Sc in Physics is teaching, I believe that Physics is a wide and great field. The researcher studies many vital areas, especially if the dream has the mixture of determination, challenge, seriousness, daily diligence, and continuously pursuit it. I am currently developing what’s called phantom used in the latest imaging equipment in the nuclear medical field, which was invented in 2017 by Siemens International. It’s a hybrid device that combines magnetic resonance imaging (with a strong magnetic field of 9.4 Tesla) and the use of positrons in medical imaging.