The Policy and Conflict Resolution Studies Center at the Arab American University organized an academic conference in cooperation with the Polish Representation in Palestine on October held at the University Campus in Ramallah with the participation of Palestinians and Poles academics and specialists. 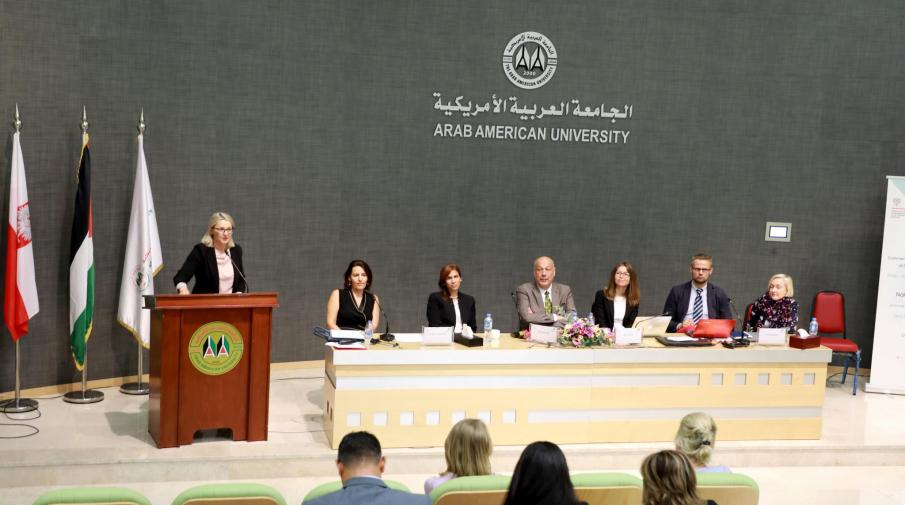 Part of the Conference

This activity is one example of the Policy and Conflict Resolution Studies Center’s many activities aimed to enrich scientific and academic knowledge for conflict resolution students & literature and cultural communication students, as it hosts cultural and academic discussions between students and civil society organizations and international partners. This conference was held on the same day that marks the 100th anniversary of the independence of the Republic of Poland.

The conference began with a speech by the Vice President for Academic Affairs, Dr. Zaki Saleh, who welcomed the guests and thanked the Polish Representation for its support of this activity. Also, he emphasized the University’s willingness and support for all academic and cultural activities which enhanced this cooperation.

Polish Ambassador to Palestine Alexandra Macbeeb thanked the University and The Policy and Conflict Resolution Studies Center for hosting this conference and wished to enhance cooperation in the future.

The first session began with a presentation by Dr. Małgorzata Głowacka-Grajper, specialized in social science and humanities, in which she reviewed some of the problems that faced the formation of the Polish national identity such as socialism, globalization and European identity. As affirmed by dr. Głowacka-Grajper, there are two narratives of the Polish people; one heroic and one tragic reflecting the memories of war and massacres. She emphasized that the Polish identity passed through several stages of transition but succeeded in being an extension of the European identity by joining the European Union.

On the other hand, Dr. Abdul Rahman Haj Ibrahim, specialized in political science and a professor at Birzeit University, focused on the similarities between the Polish and Palestinian narratives. The events that the Polish people experienced throughout history reflect their exposure to wars, disasters and fight for an independent state. These events are similar to the historical Palestinian experience and he encouraged the Palestinians to benefit from the Polish experience that created a national narrative that brought all Poland’s together.

The third speaker, Dr. Kornelia Kończal, researcher of the social history of Eastern Europe, reviewed the history of the relationship between the Germans and the Poles as well as the collective memory of the Poles. She clarified that the Polish memory is divided into several narratives. There is a narrative built upon the memory of the Poles who lived under the Russian socialist rule and memory of the Poles of the Independent Republic of Poland and also the memory of those who lived under the German rule. Dr. Kończal also reviewed the community reconciliation processes carried out by the two Polish and German sides to overcome the historical problems of the relationship between the two peoples in order to create one narrative built upon the positive values of the two parties.

In the Second Session, Dr. Dalal Erekat from Faculty of Graduate Studies at Arab American University focused on the importance of branding the state through the use of public diplomacy and any soft or attractive power as well as the importance of labeling them. The most important factors in the process of nation branding are the cultural, economic, political factors and tourism.

Dr. Erekat clarified that there are several perspectives concerning the difference between public diplomacy and nation branding. Some consider it resembling and others consider it intersecting but on one side public diplomacy is considered to be different from nation branding because of the role of individuals and not the role of the states. Each state has its own labels and characteristics which distinguish it from other states, its uniqueness is reflected in what it does not have. Whereas the public diplomacy looks for what is common between the different states and its task is done by the governmental institutions, on the contrary of nation branding is performed by individuals isolated from the state in the form of campaigns or slogans where the state may choose to support such public campaigns that changes the stereotype of the state on the international scene through its citizens and forms of creativity.

As she also stressed that the shared Palestinian awareness of the national identity began to take shape by the end of the Ottoman rule and developed and strengthened with the emergence of the national feeling at the same time as the historical events that occurred in the Arab region and Palestine in particular. Dr. Habiballah emphasized that the Palestinian identity matured and became evident at the beginning of the sixties with the formation of the Palestine Liberation Organization, which united the Palestinian people and was able to create a national narrative representing all Palestinian. 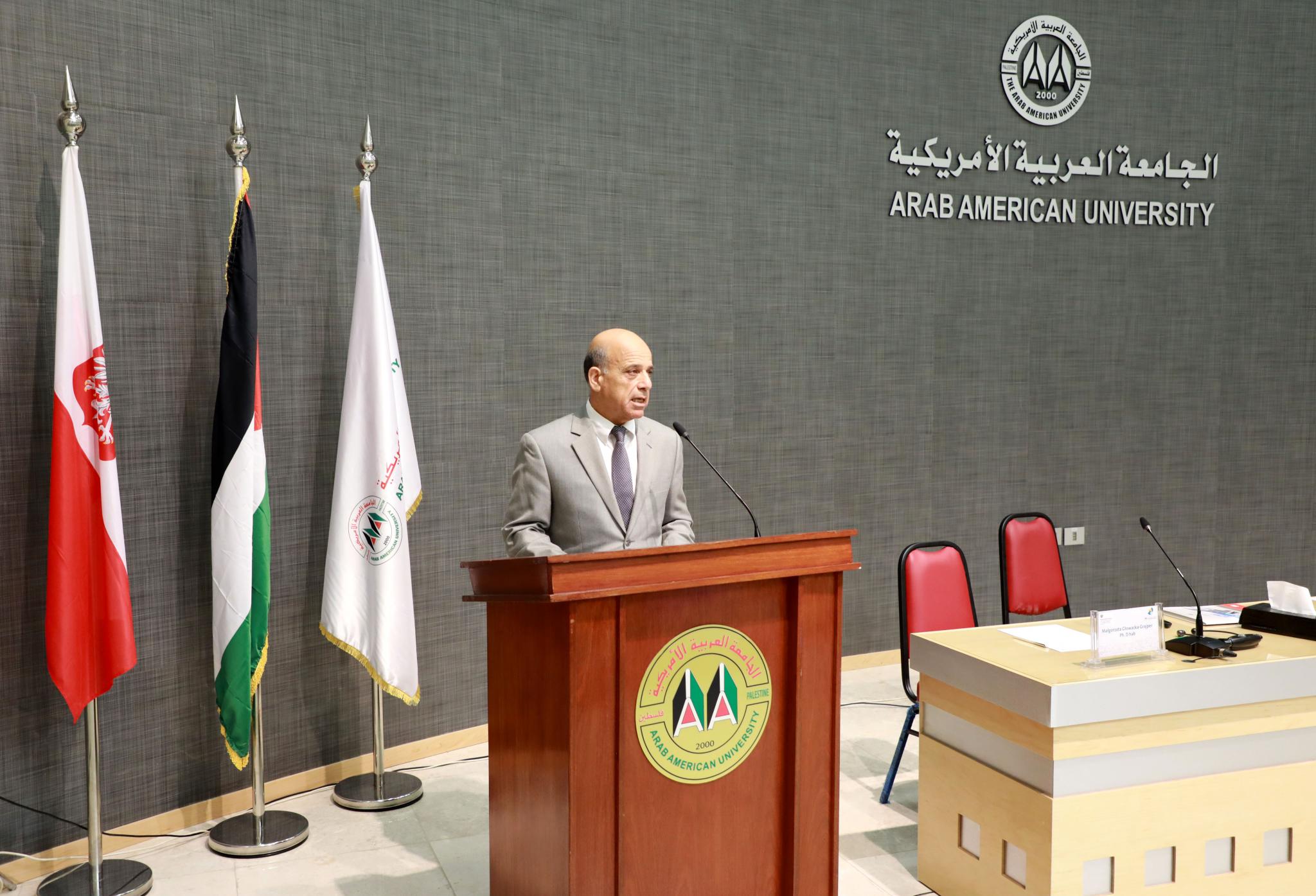 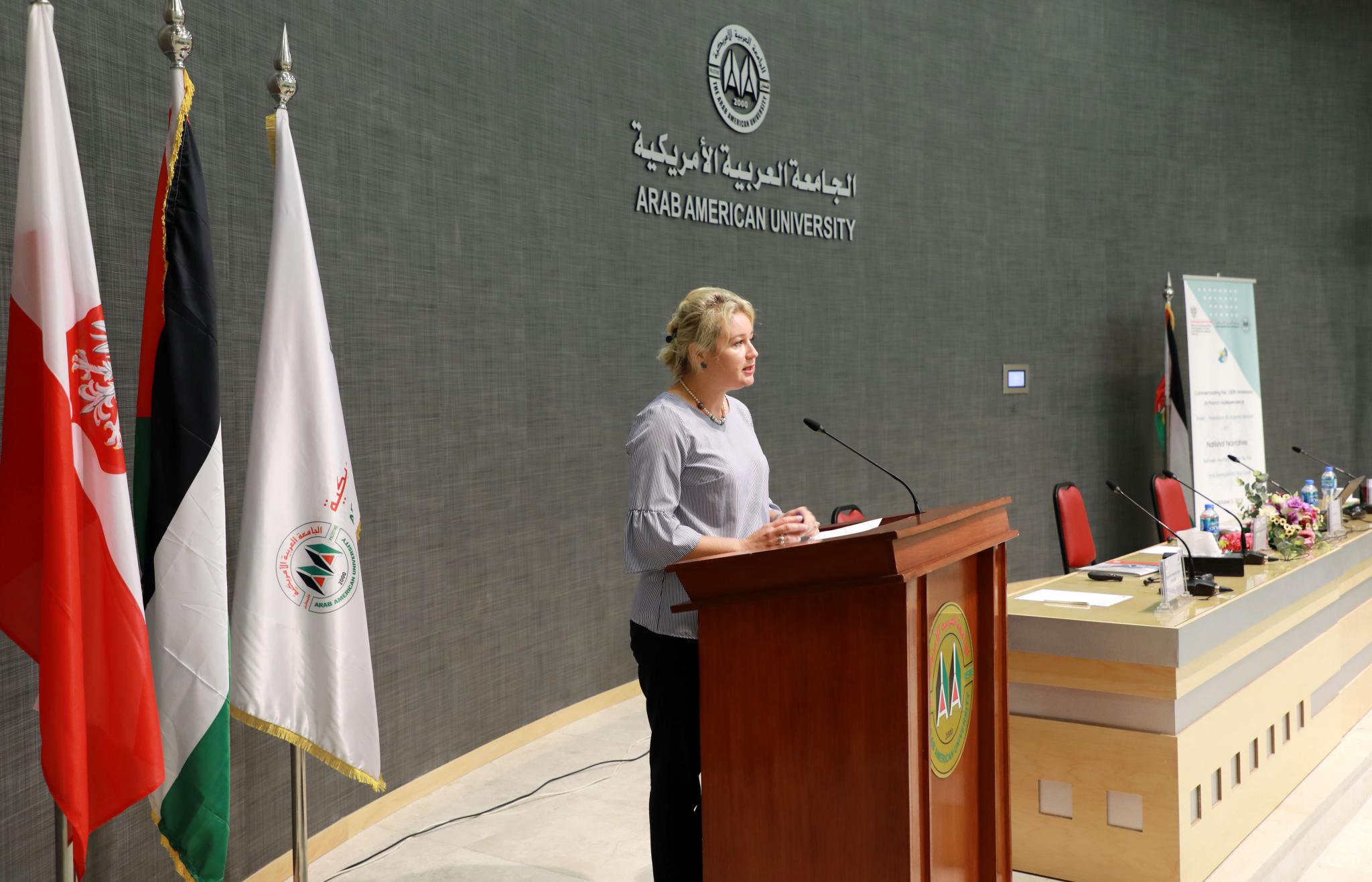 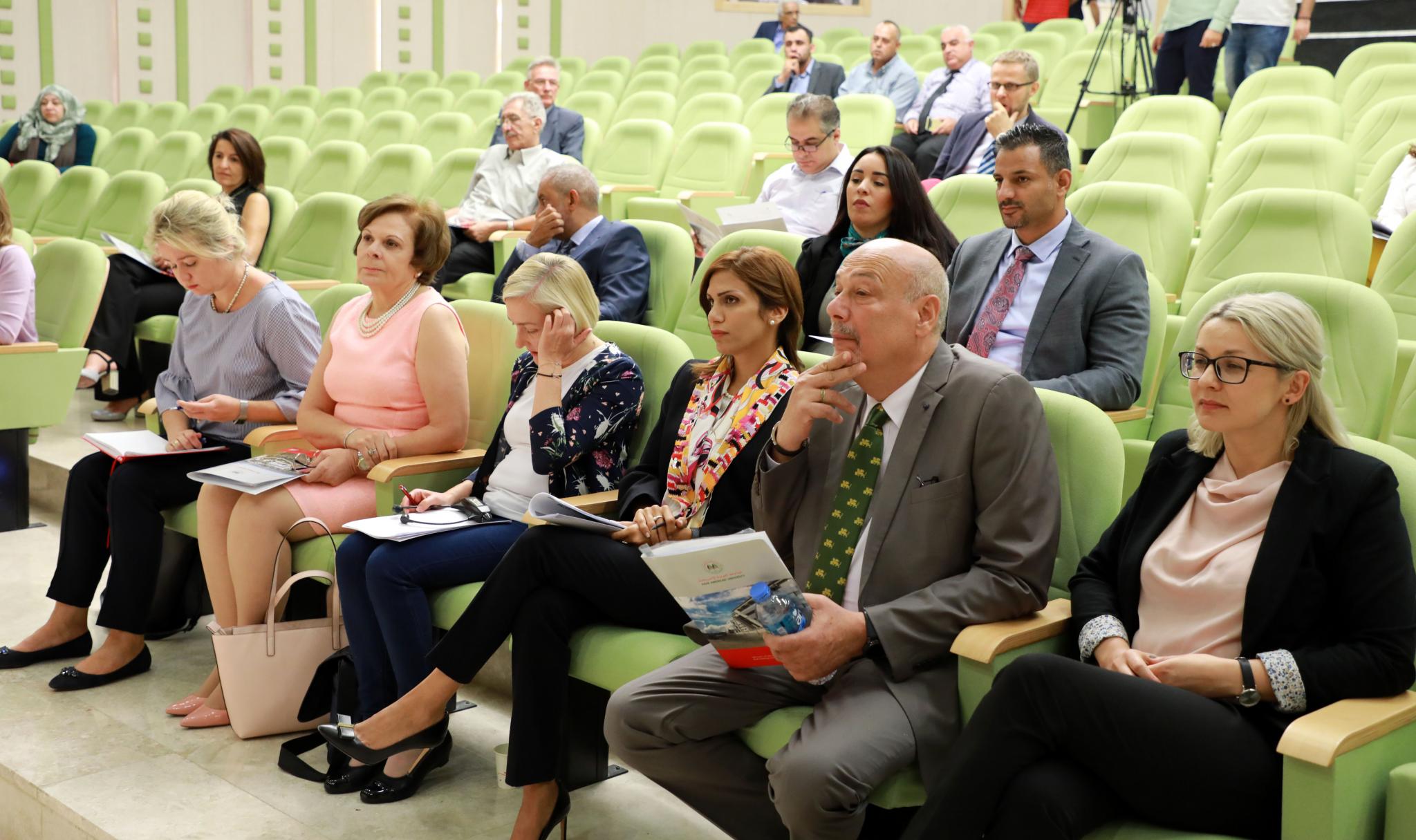 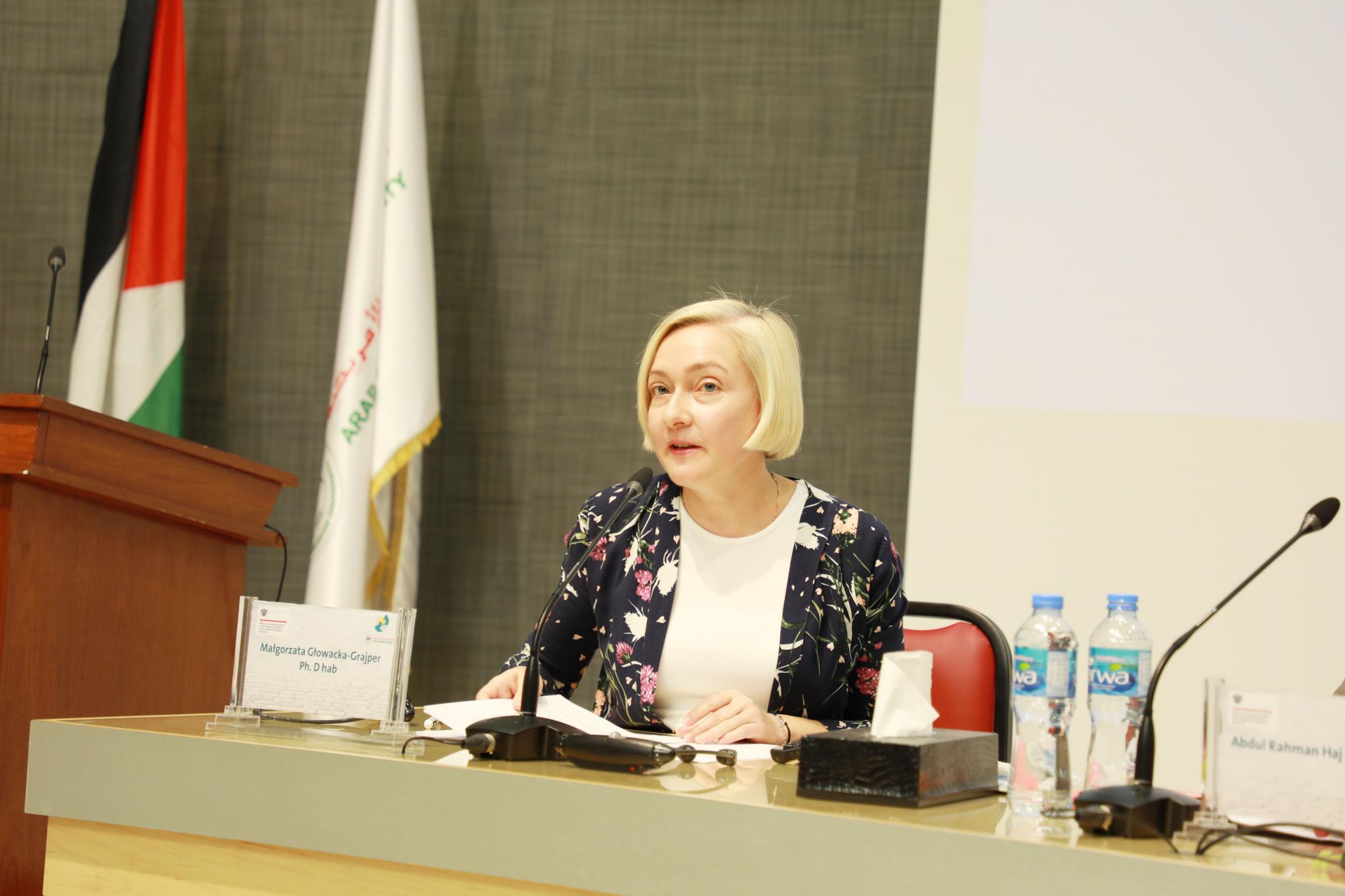 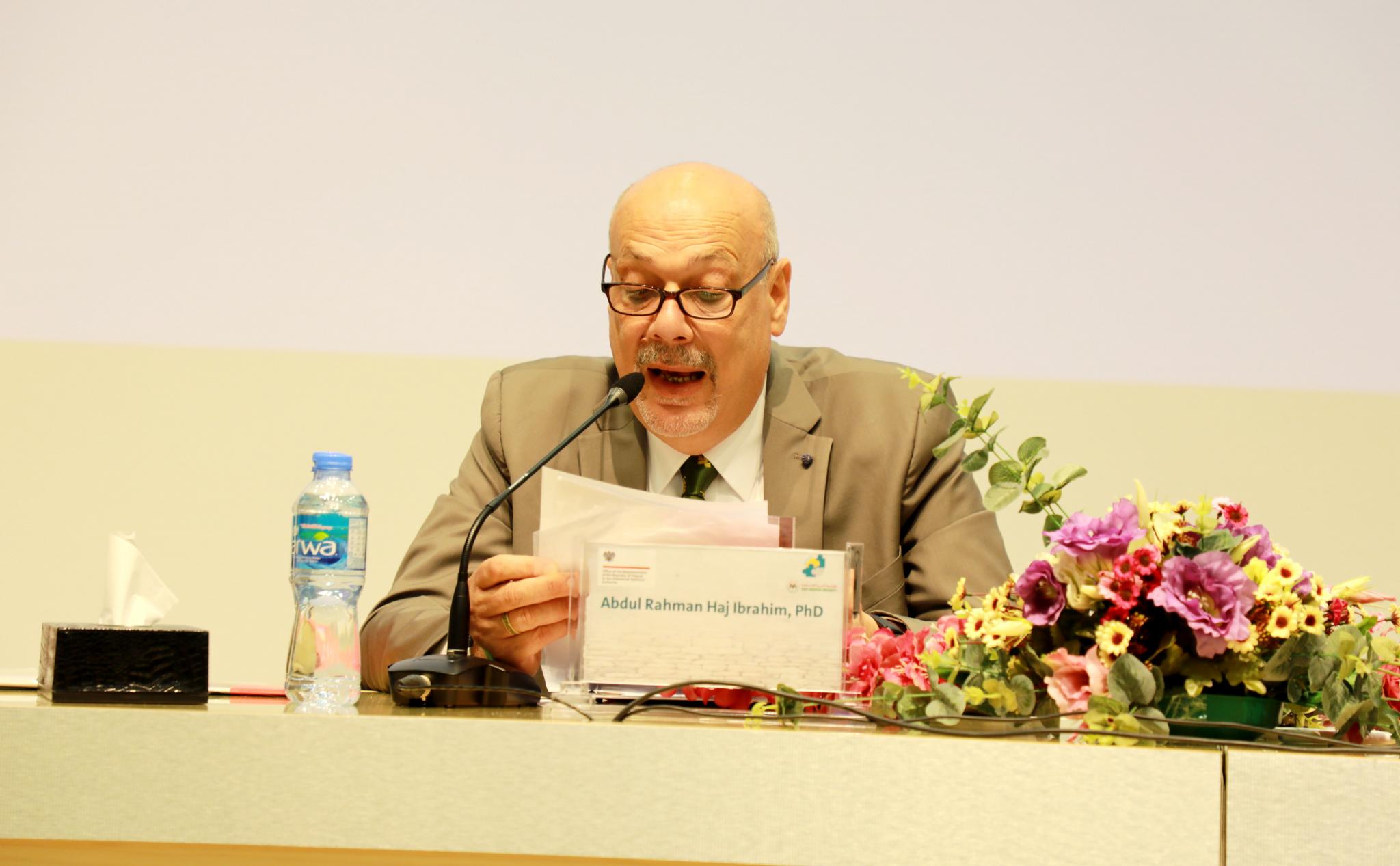 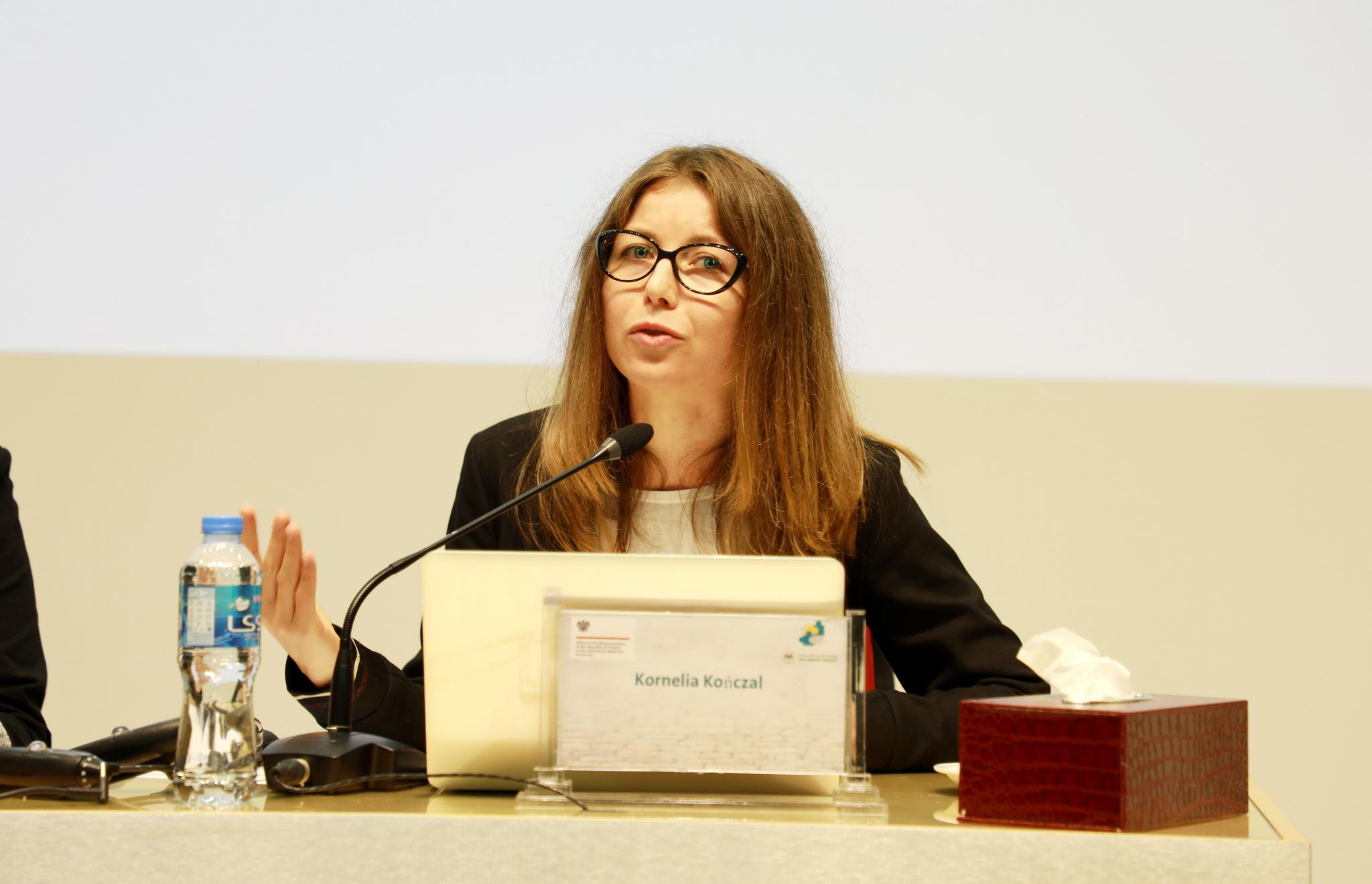 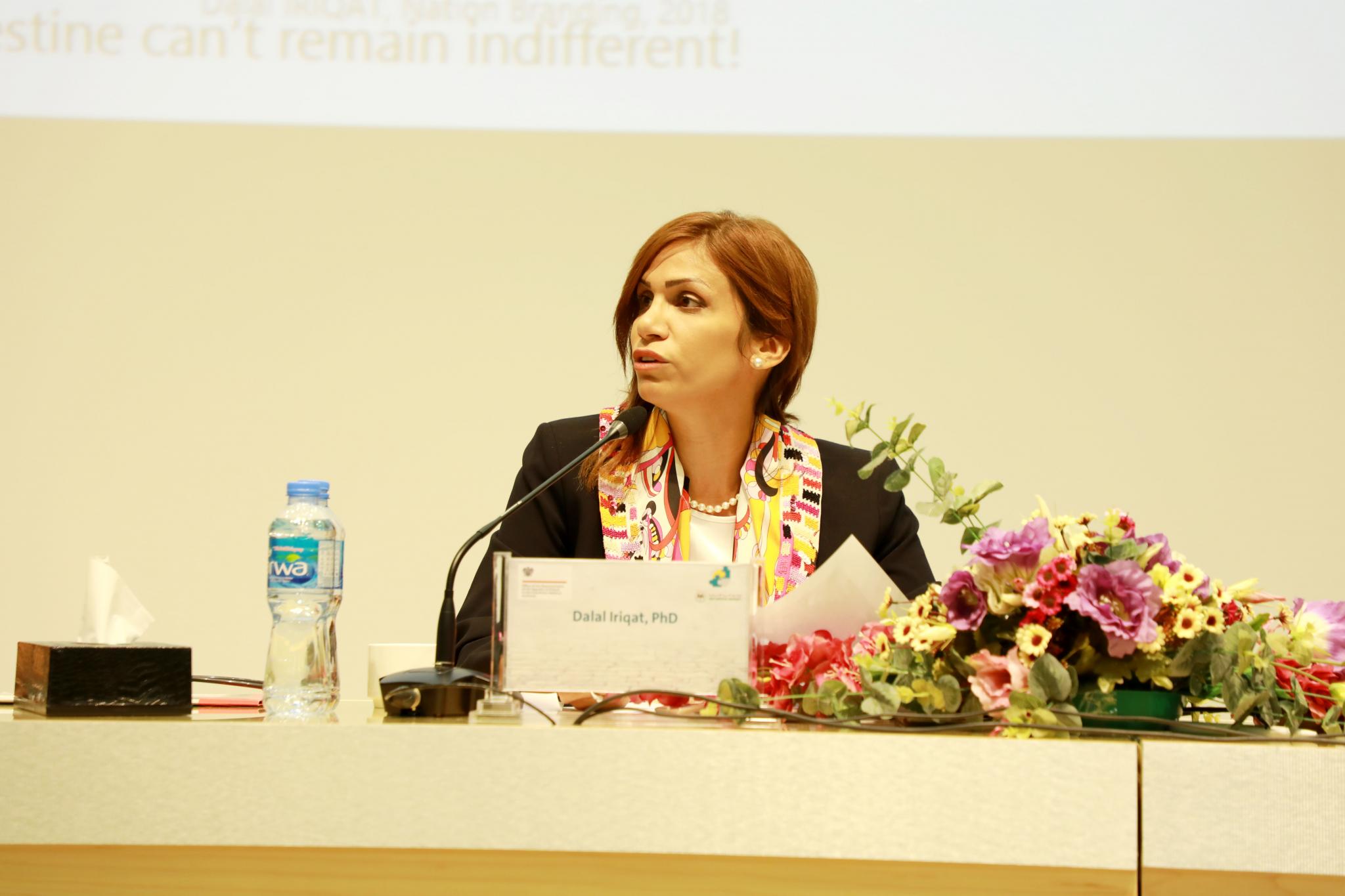 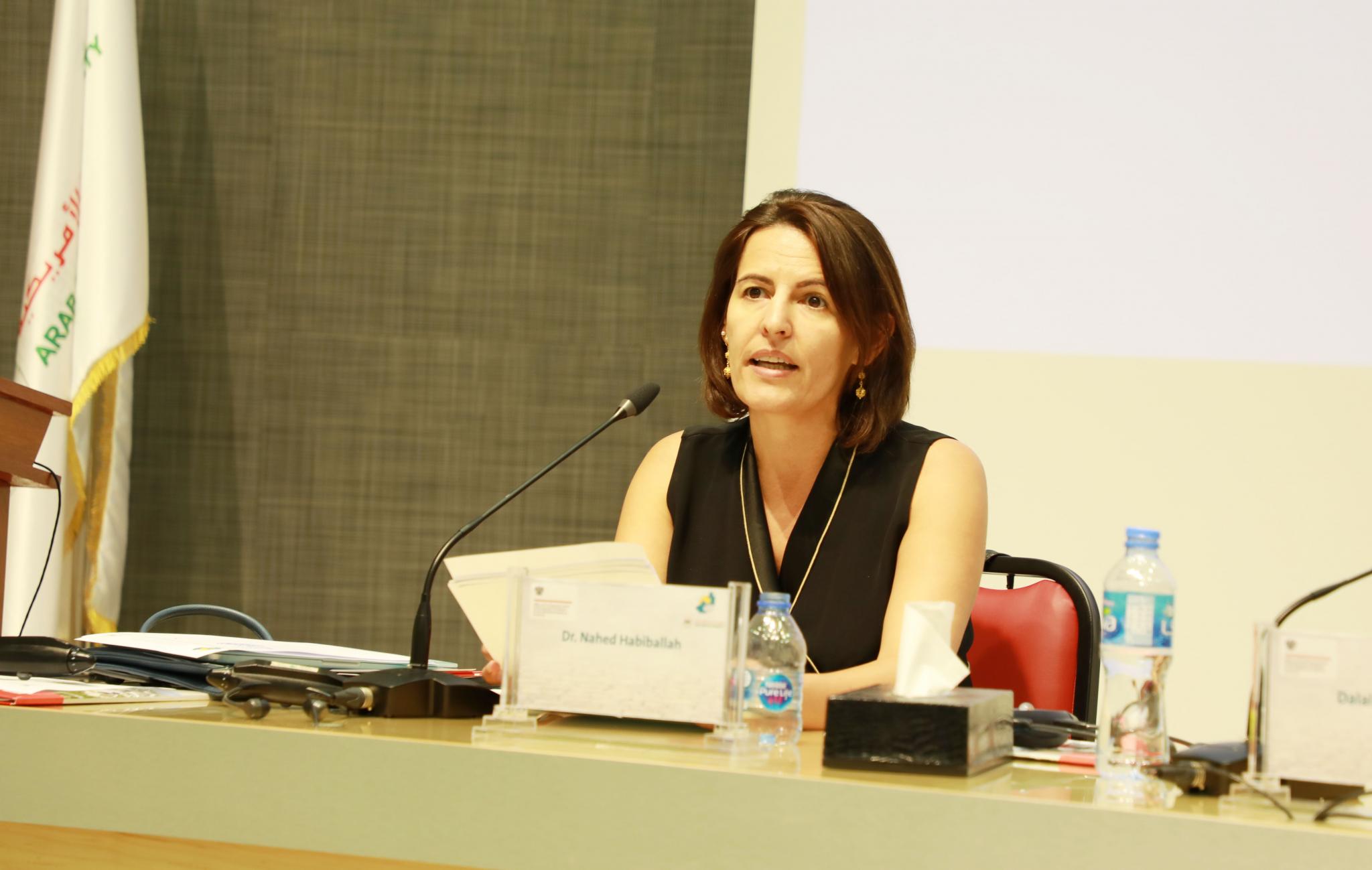 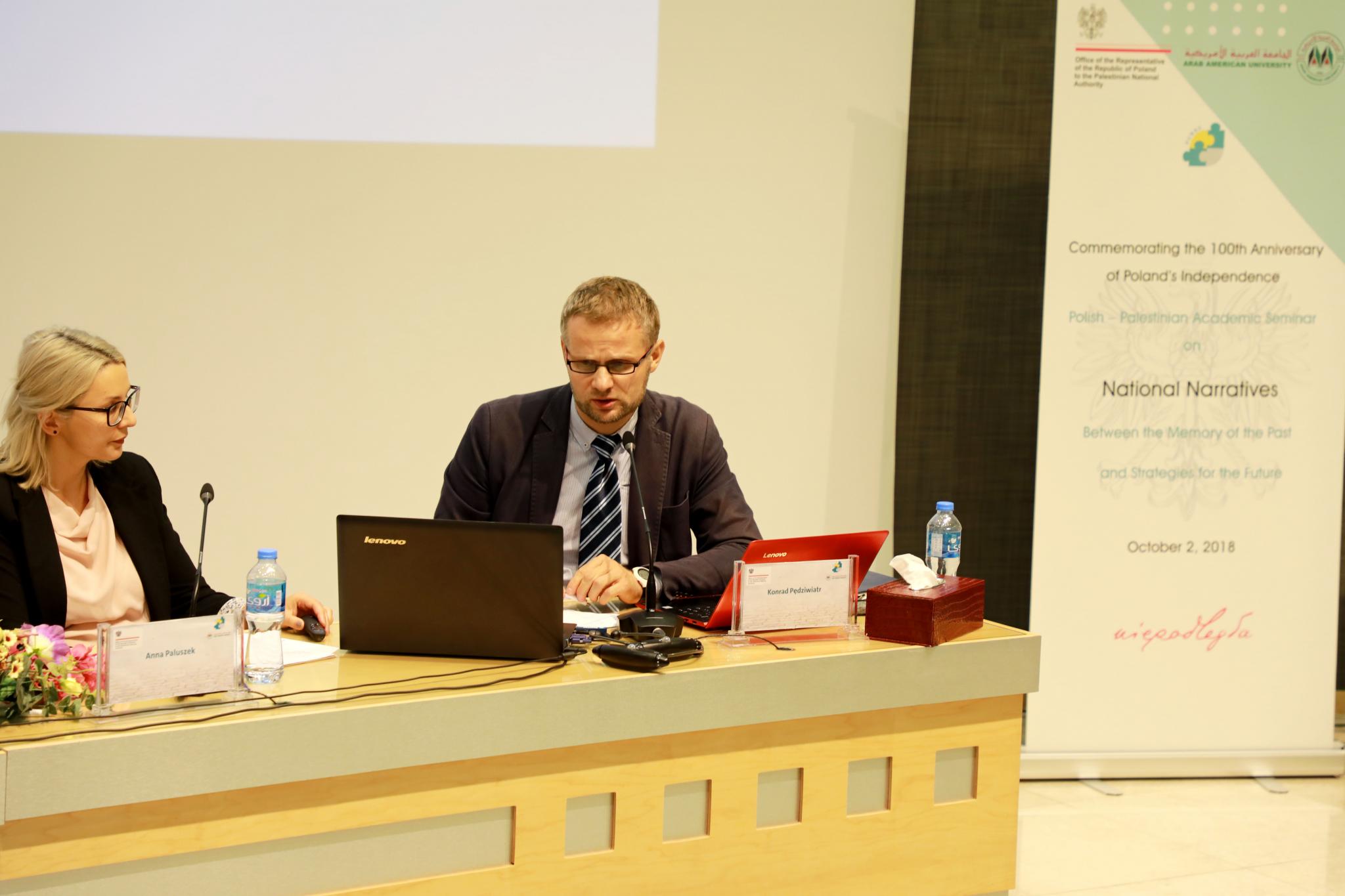 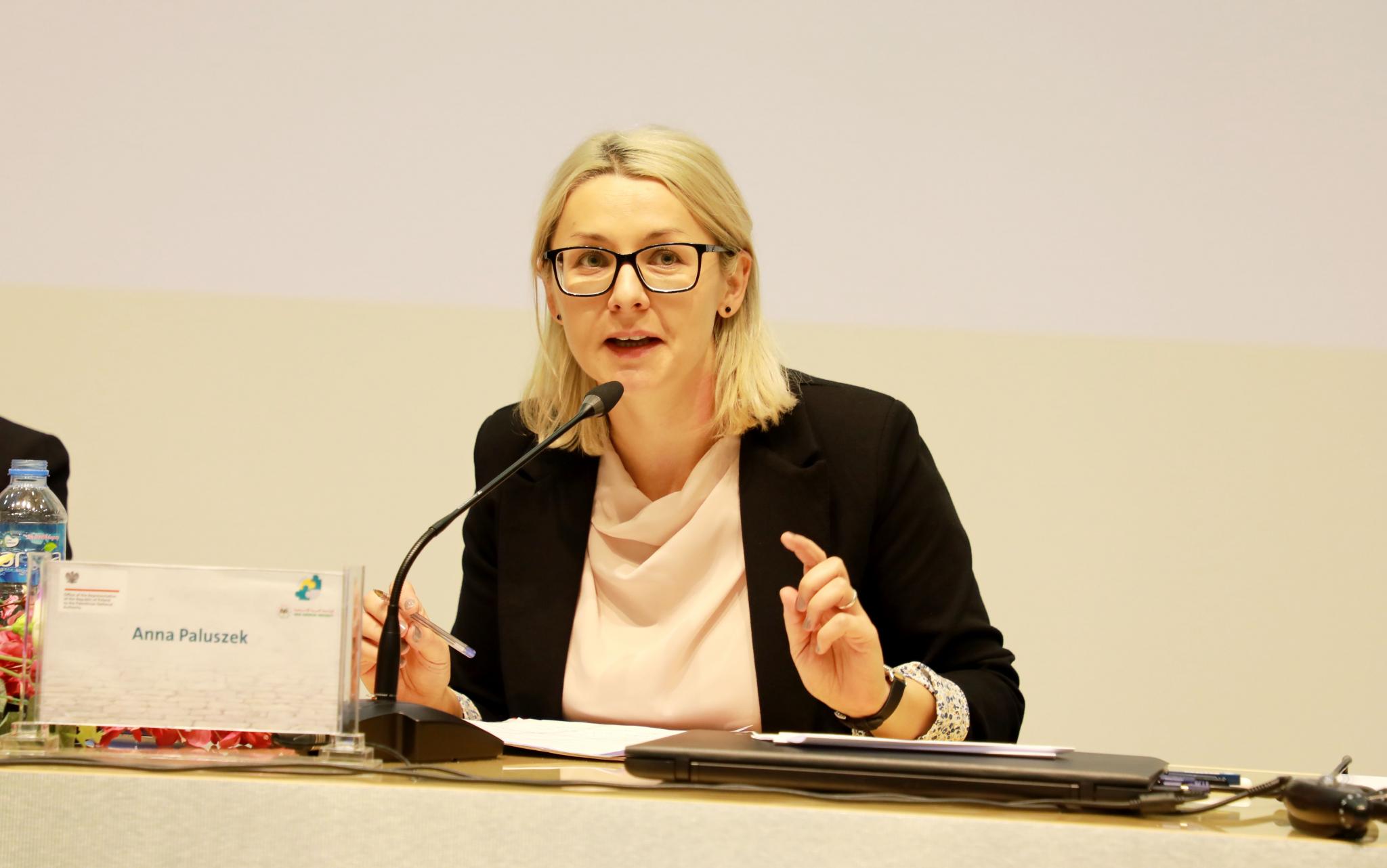