AAUP Organizes a Book Review Seminar to Discuss Dr. Maher Sharif’s "The Palestinian Intellectual and the Stakes of Modernity (1908-1948)"

The Policy and Conflict Resolution Studies Center in Arab American University organized a Zoom Seminar to discuss the book of the Palestinian historian and researcher Dr. Maher Sharif entitled “The Palestinian Intellectual and the Stakes of Modernity (1908-1948)” that was published by the Institute for Palestine Studies in 2020. 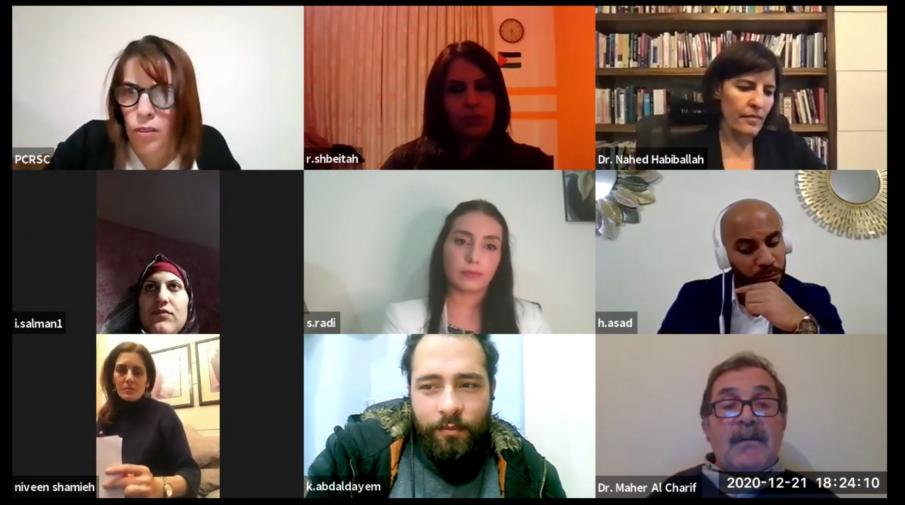 Ms. Rula Shahwan- the Director of the PCRSC started the seminar by asserting that the center will always seek to organize such conferences and academic seminars that have a role in enriching the knowledge of graduate students and the community. The center always hosts Palestinian historian, scientists and researchers to highlight their achievements. Ms. Shahwan also introduced Dr. Maher Sharif- the Palestinian historian who is the head of the research unit in the Institute for Palestine Studies in Beirut and the winner of the Palestine Prize for Social Studies and Humanities 2020.

Mrs. Shahwan mentioned that Dr. Sharif wrote many books and she encouraged students to benefit from his experience and knowledge, some of his books are: “The Economic and Social History of Palestine in 1985”, “The Search for Entity: A Study in the Palestinian Political Thought from 1908 – 1993”, “Palestine in the Secret Archives of the Comintern in 2004”, “Palestine in the Arab Historical Writing in 2016” and “The History of the Palestinians and their National Movement with Issam Nassar in 2018”

Dr. Nahed started the session by explaining that this meeting gives students of the Conflict Resolutions and the Intercultural Communication and Literature Graduate programs the opportunity to participate in a live dialogue and discussion with Dr. Sharif. Dr. Habiballah asked her guest some questions such as why he chose the specific period of 1908- 1948, the impartiality of the writer while writing history, and how can the historian isolate himself from his orientations while writing the history_ indicating that the book reflects that there was an attempt to build a national narrative at that time_ but the question that arises is why this modernist project was not transferred?

Dr. Maher Sharif thanked Arab American University for arranging this meeting and talked about his new book “The Palestinian Intellectual and the Stakes of Modernity (1908-1948)” and said: “the book starts by assuming that Palestine knew a modernist intellectual project by Palestinian intellectuals, who were influenced by the ideas of the pioneers of the Arab renaissance who had contact with modern European cultures, either through foreign missionary schools in Palestine, or through residency and study in European universities, or sometimes through translation.”

Dr. Sharif added: “They put a main goal for themselves which was to transfer their community from tradition to modernity to be able to win the survival struggle that was imposed on it.”

He explained that the book reflects the modern thoughts that the Palestinian intellectuals have faced during the events in Palestine since the late Ottoman era, and during the British Mandate era. This was after the separation of science from religion and after the emergence of the modern education, and there was a great opportunity to interact with modern European ideas and the emergence of printing and the spread of press.

At the end of the meeting, students had the chance to ask Dr. Sahrif questions and they focused on the possibility to recasting history by using new means such as the oral archive, the Islamic-courts archive, the visual archive and personal notes as primary sources to build the Palestinian national novel. On the other hand, Dr. Sharif ensured that the history should be written from bottom to top, which means to rely on the social history of the Palestinian people and not focus on elite sources only.

Recommendations to Create an Observatory for the Digital Election Campaign, and AAUP Discusses “What Do the Social Media Networks Hide to the Palestinian Elections?”
22 Mar 2021