Under the auspices of the President of the State of Palestine, His Excellency President Mahmoud Abbas "Abu Mazen", Arab American University celebrated the graduation ceremony of the 17th and the 18th cohorts, and the first day was a great celebration for the students of the Faculty of Graduate Studies and the firsts in each faculty and department. 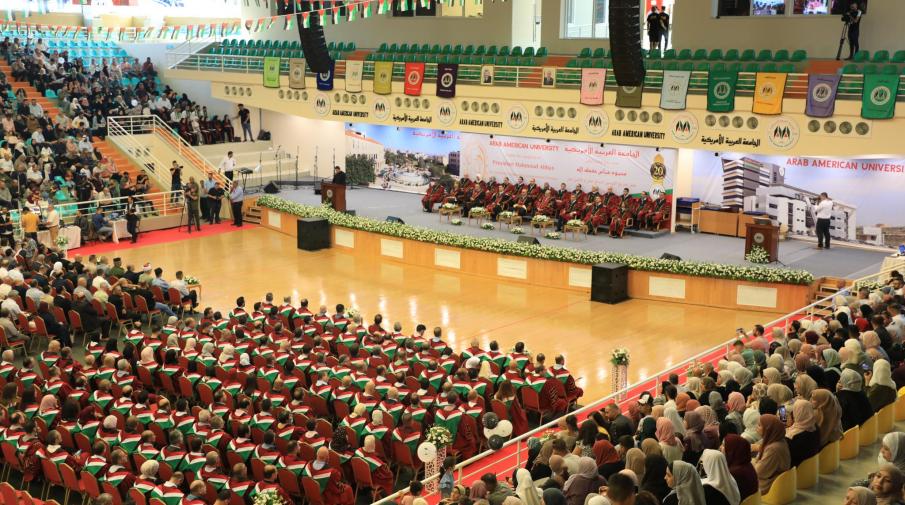 The celebration was under the auspices of the President of the State of Palestine, His Excellency President Mahmoud Abbas "Abu Mazen" and attended remotely by his representative Prof. Mahmoud Abu Mwais- the Minister of the Ministry of Higher Education and Scientific Research with a recorded speech, Prof. Ali Zeidan Abu Zuhri- the University President, Members of the Board of Trustees, Major General Mr. Akram Rjoub- Jenin’s Governor, Mr. Ahmad Al Haj Hassan, Ms. Hania Albitar, the Vice President and the assistants to the President, the members of the Dean’s Council, Mr. Salah Joudeh- the Legal Advisor of the Board of Directors, Mr. Faleh Abu Arrah- the General Director of Arab American University Company, representatives and leaders from the security services of Jenin, members of the Academic and Administrative staff, representatives of official and private organizations and a great number of parents and family of graduates.

The Speech of the University President

Prof. Ali Zeidan started his speech by transferring the greetings of the President of Palestine, His Excellency President Mahmoud Abbas "Abu Mazen"and said: “We are happy to see you today after the unexpected events that prevented such celebration in the previous year, to celebrate together the graduates from the Faculty of Graduate Studies and the firsts on each department, and to announce the beginning of the graduation ceremony activities that will be starting today and for the coming three days. We will be celebrating the 17th cohort that COVID-19 spread last year could not let us celebrate and the 18th cohort who finished their graduation requirements. Prof. Abu Zuhri added: “Arab American University in its both campuses in Jenin and Ramallah became one of them most important education provider in Palestine and the region and its staff, graduates and projects have the main role in building the country. We praise and thank Mr. Mahmoud Abbas for his support and we appreciate his role in saving our national constants, and his scientific role in his permanent support for the educational process”.

Prof. Abu Zuhri also said that Arab American University seeks to follow all the new topics academically and to develop its infrastructure and scientific capabilities to provide the best to the Palestinian community through graduating professional students from modern faculties and programs that fulfill the needs of the local, regional and global labor market. He also indicated that during the past two years, AAUP managed to open new faculties and new academic programs according to accurate studies of the current and future needs of the market, including the Faculty of Medicine and some other creative bachelor and masters’ programs, and in this year alone the university provided 11 new PhD programs.

Prof. Abu Zuhri also talked about the centers provided by AAUP to serve the local community and develop the community, such centers as the climate change center that has a weather station that covers the northern part of Palestine, also the smart green house for agriculture, the policy and conflict resolution studies center, the cancer cases registration center, the heart center and other centers such as the treatment centers for the community as the physical and occupational therapy centers, the dental center and the children rehabilitation center. Moreover, the laboratories in AAUP had a distinguish work under collaboration with the Ministry of Health during the COVID-19 crisis in their advanced laboratories.

The University President also announced about the new centers that will open soon and new high level projects as he said: “we now announce that we are planning to soon open three high level services centers which are: the Physical and Occupational Physiotherapy Rehabilitation Center, the Hearing, Speech and Language Diagnostic and Treatment Center, and the Prosthetic Limb Factory Center which is the first of its kind in the Middle East, additionally, AAUP will start working on rehabilitation process to people with special needs to enable them to get a driving license under collaboration with the Ministry of Transportation. Furthermore, we announce the opening of the first center to the 4th education in technology the AR.VR as this center will provide modern training services for students and professors and will add a contemporary education in the medical and biological sciences under the best international standards to serve the local community that we are part of it”.

Prof. Abu Zuhri added that the achievements of AAUP serve the students, the local community and the country and said: “Thanks to God, and the efforts of the staff of AAUP, we are providing many services to the students, to our people, to our community, and our country. For instance, AAUP has opened its half-Olympic swimming pool to its students and to the local community, the squash fields host official games for squash, and the sports hall hosted international games in the basketball field especially after considering its field as the home field for the Palestine national basketball team”. He added, “Allow me on behalf of the academic and staff of AAUP and on behalf of the local community to thank everyone who was part of doing this and reaching AAUP to this stage, especially Dr. Yousef Asfour- the Chairman of the Board of Directors, and the members of the Board for their continuous care and support to provide all the academic and administrative needs, all thanks and appreciations to them”.

At the end of his speech, Prof. Abu Zuhri concluded by directing his speech to the graduates and said: “I congratulate you on your graduation from you second home, and wish you all the best of luck. You are now the ambassadors to our university and to the country, and you are about to start a new chapter of your life, be ready and set your goals to walk the best bath for your goals and do not walk aimlessly even this was easier for you to do. I would also like to congratulate your parents who waited for this moment. Thank you all for your efforts, wish you the best of luck for your life and for Palestine”.

In his speech on behalf of the graduates, the graduate Ibrahim Maghnmen from the Faculty of Graduate Studies said: “Standing before you today and smelling jasmine brought me back to the years I spent here in this great edifice “Arab American University”, as I can proudly say now that I have graduated from AAUP the university for all Palestinian people, with its distinguish programs and excellent staff and faculty members, and its creativity and leadership in education and scientific research”. He appreciated the roles of the professors of AAUP and directed his speech to then saying: “Dear professors, who are messengers in education in what you provided, we thank you all by praising all the effort you did and still doing, God will give you from his blessings”.

Mr. Maghnmen then talked to the graduates and said: “you are the stars of this night, congratulations on your great achievement, you deserve the best. Let us now do what we are meant to do, let’s be productive in our community and country and remember that with education and hard work, countries are built and saved, so do not hold this certificate without any action, history will remember only those who work hard”.

In her turn, student Niveen Abbas- who is participating in an international contest in the United Kingdom said in her recorded speech: “Today is the day that my family is proud of me the most, my graduation day with all the excellent students. I wanted to join my colleagues our happiness while in Britain as I waited for this day as you and your families did”. She also thanked Arab American University, its faculty members and staff who provided all the needed services to all students proudly, and added: “We will be at your good thoughts as you entrusted us to be, thank you all efforts are much appreciated”.

She said to her graduating colleagues, “Today we turn a page full of sleepless nights, fatigue and achievements as the harvest time comes today, I will miss my friends and colleagues and everything we have lived in this university”.

Representative of the President of Palestine Speech

Dr. Abu Mwais added: “from an empty land to a beautiful university, and from a wild mountain to a university city, this is Arab American University in Jenin and the countryside of Marj Bin Amer and the wild jenin camp. I am proud of all our Palestinian universities that all seek to comprehensive digital systems and to commit to global quality standards in the academic programs and research projects”. He continued: “This university is a success story with unlimited chapters of patience and efforts, and today in this graduation we are collecting the fruits of our effort, towards a modern and contemporary Palestine and Jerusalem as its capital”.

Prof. Abu Mwais greeted Arab American University and all the Palestinian universities that jumped from traditionalism to globalism, from stereotype to integrative and digitalism, and from repeated researches to creative and excellent researches. He also appreciated the role of those who are behind this scene who promised and fulfilled their promises, the Chairman of the Board of Directors Dr. Yousef Asfour, the members of the Board, the leader of this academic efforts and the first president of the university Prof. Waleed Deeb, Prof. Ali Zeidan Abu Zuhri- the University president and the previous presidents, the faculty member, the staff and our dear stuents.

In his conclusion, Prof. Abu Mwais said: “congratulations to students, their families and to the university and to Palestine. Congratulations to the prisoners, you will be free, and the wounded will be healed, victory to Palestine until we pray in Al Aqsa Mosque and Alqiama charch”.

At the end of the ceremony, Prof. Ali Zeidan Abu Zuhri – the University President, the members of the Board of Trustees, General Akram Rjoub and Mr. Jamal Abu Rub, the Vice President and the Deans of the Faculties honored the first of each faculty and then certificates were handed to the following graduates:

Students on top places in their Faculties and Majors 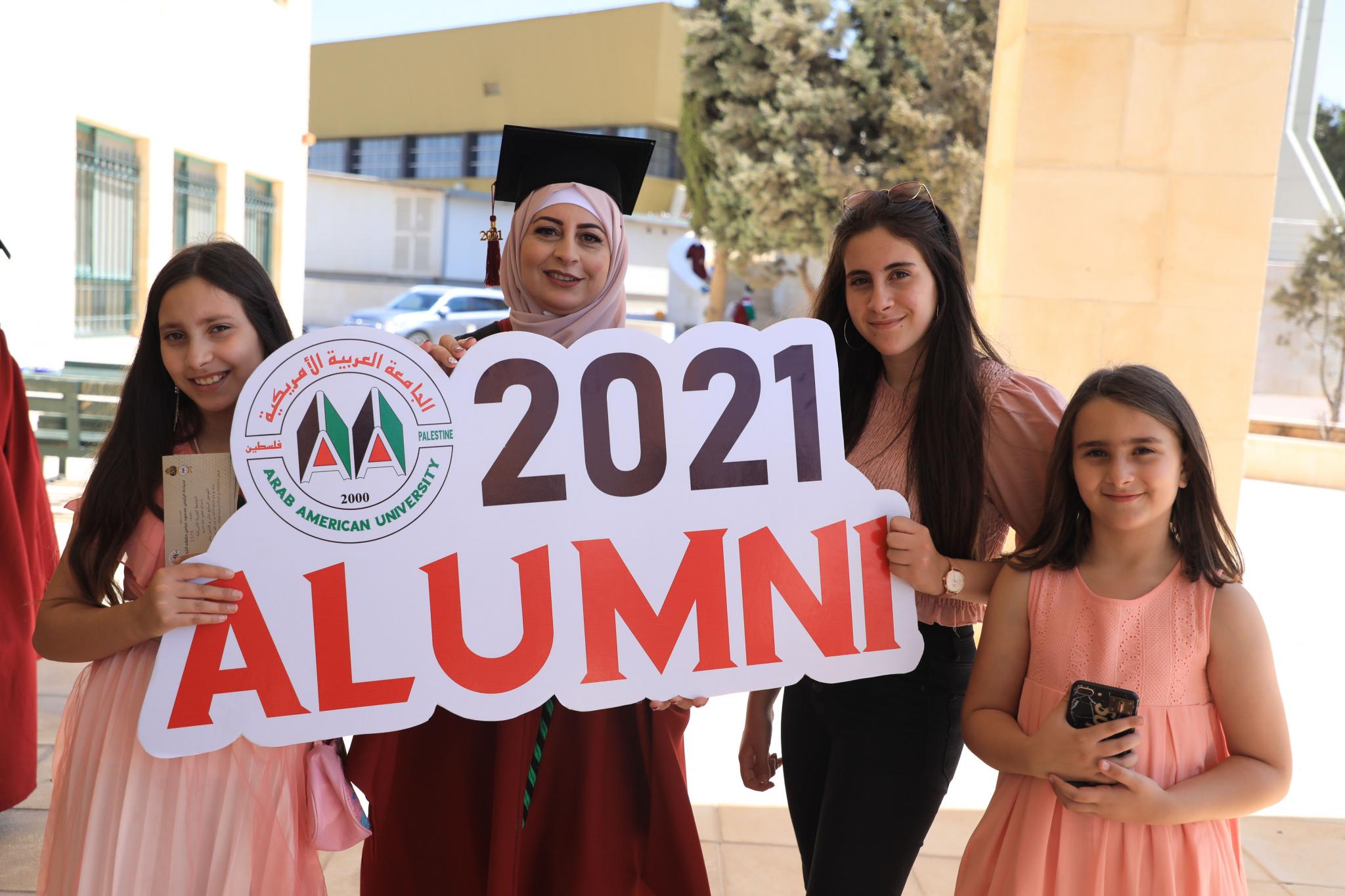 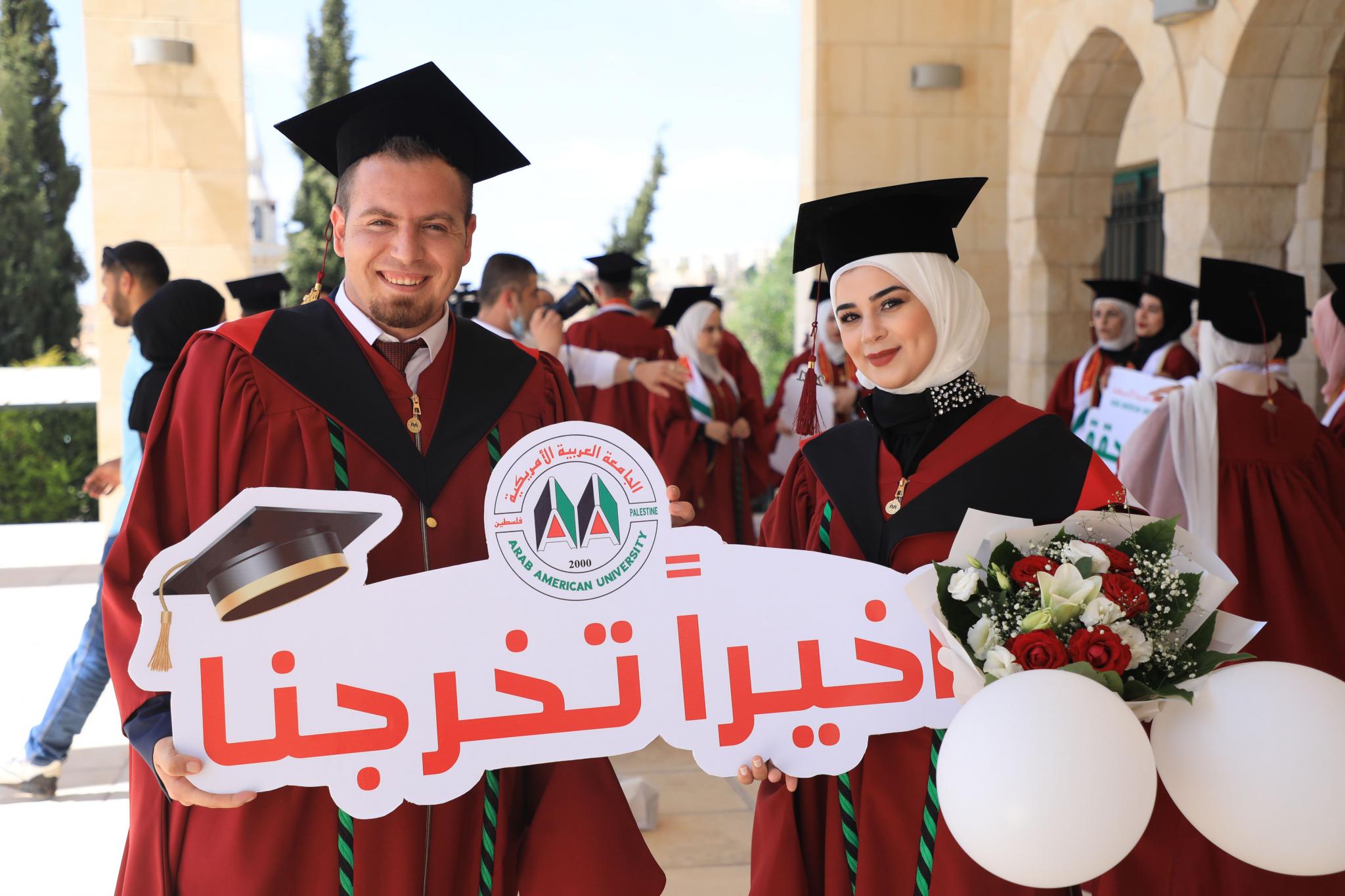 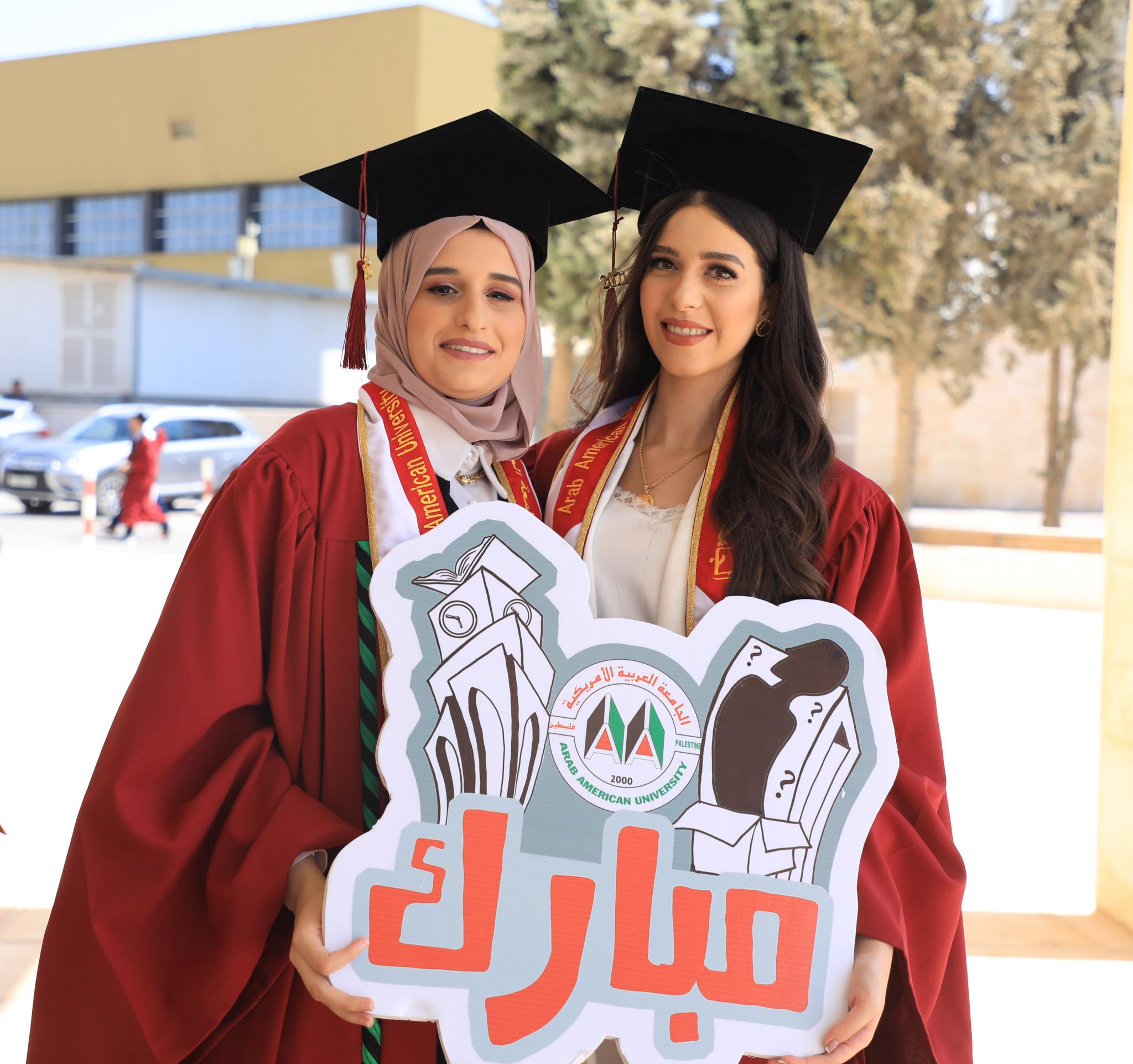 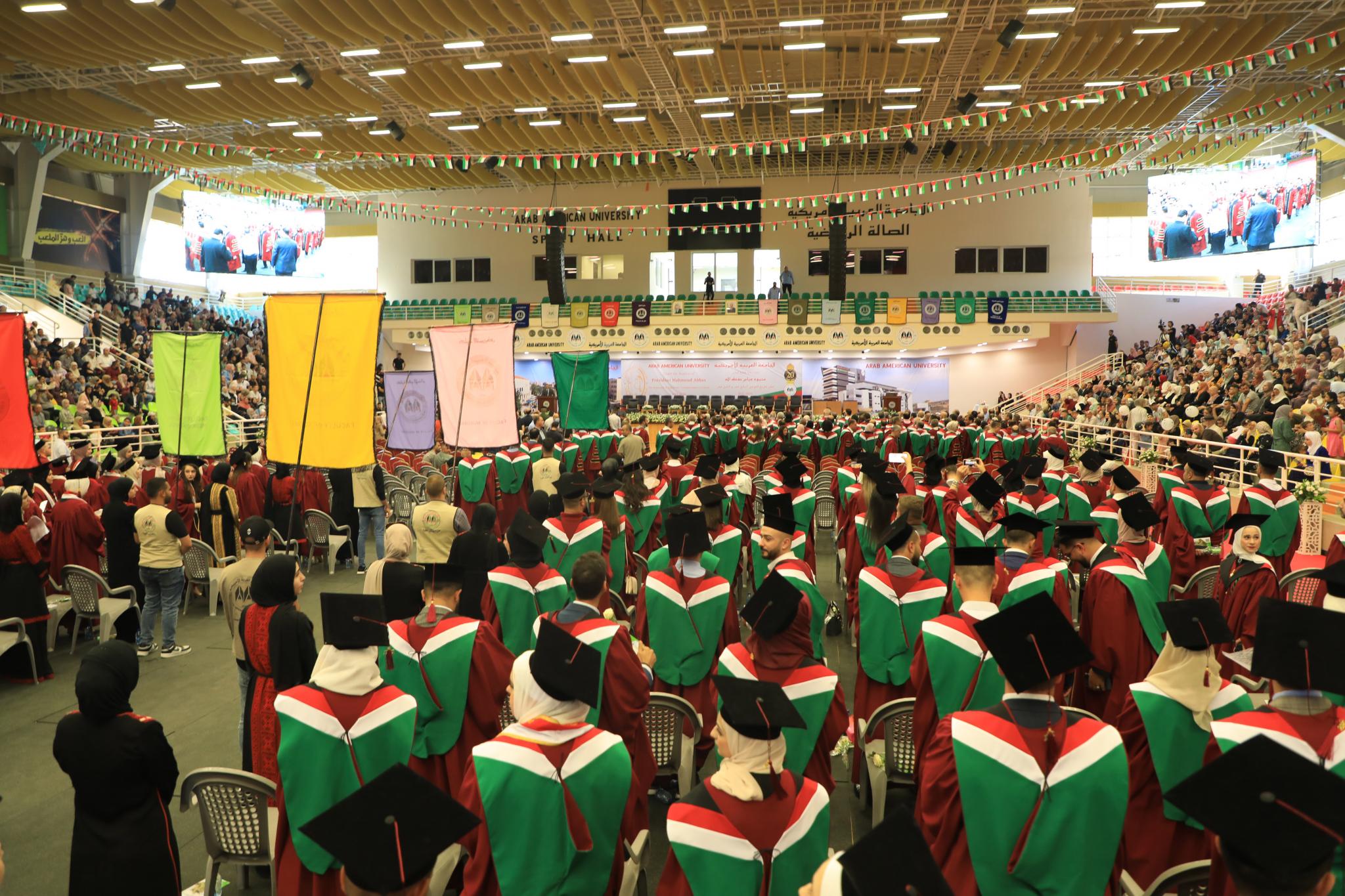 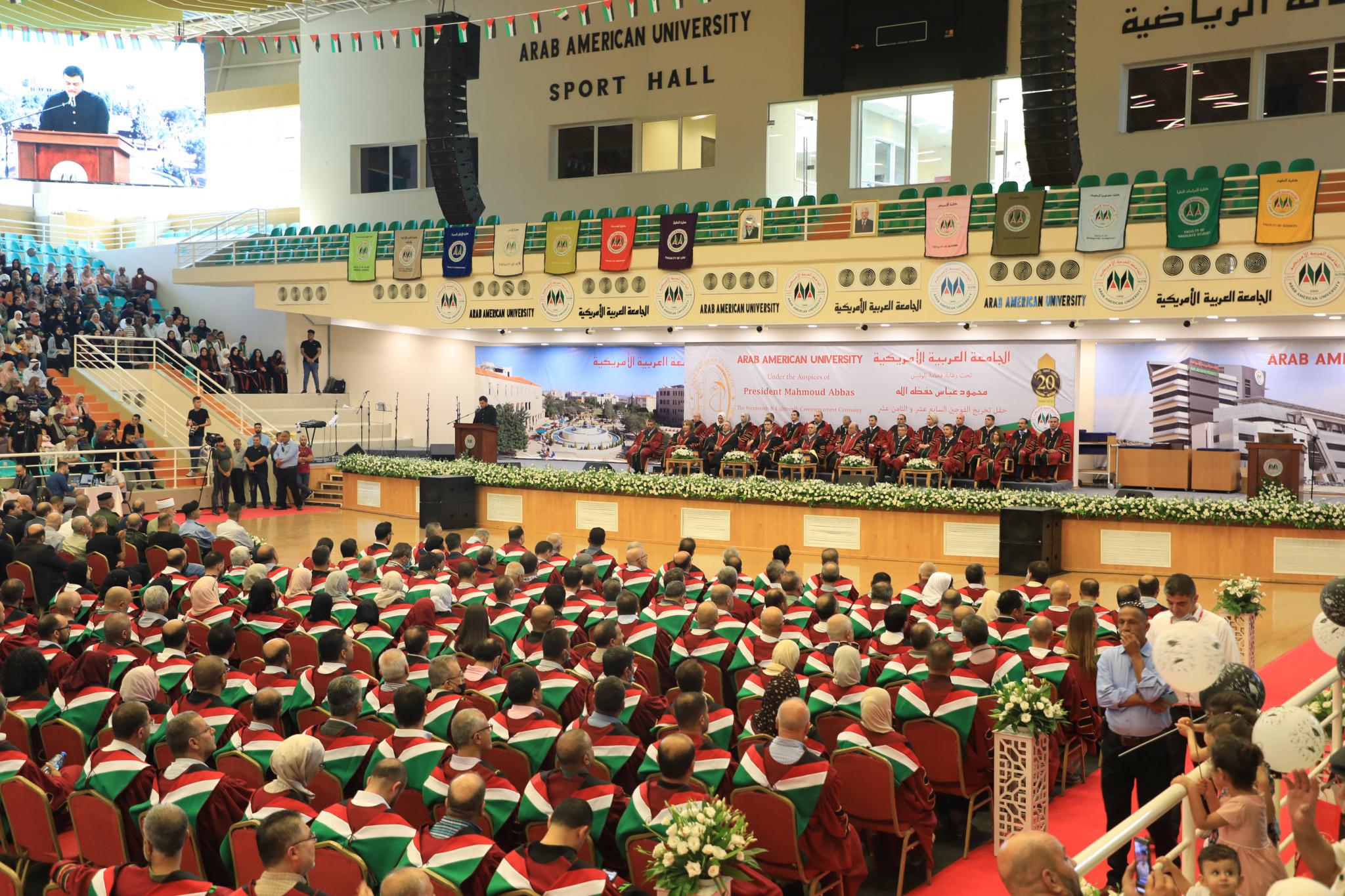 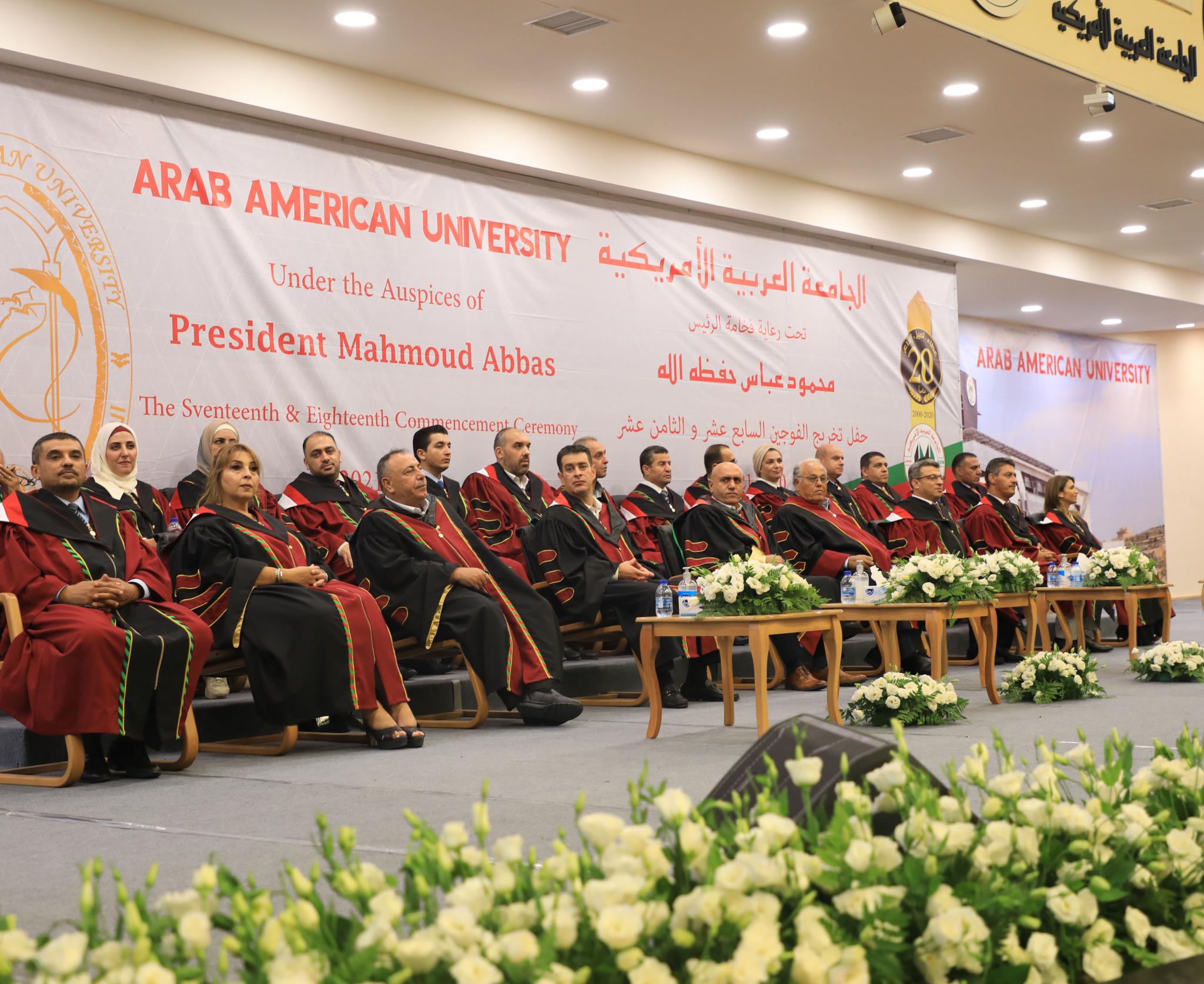 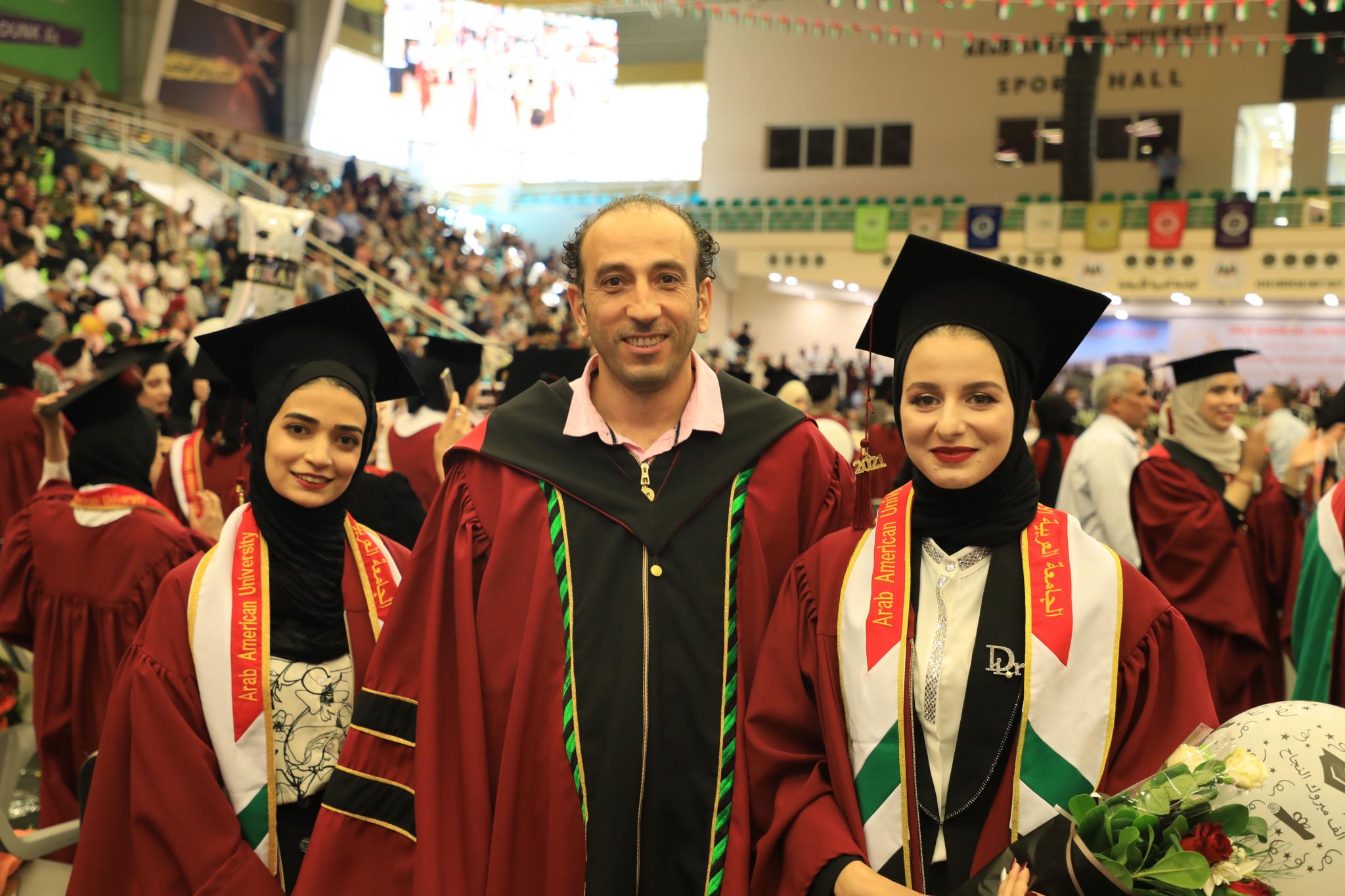 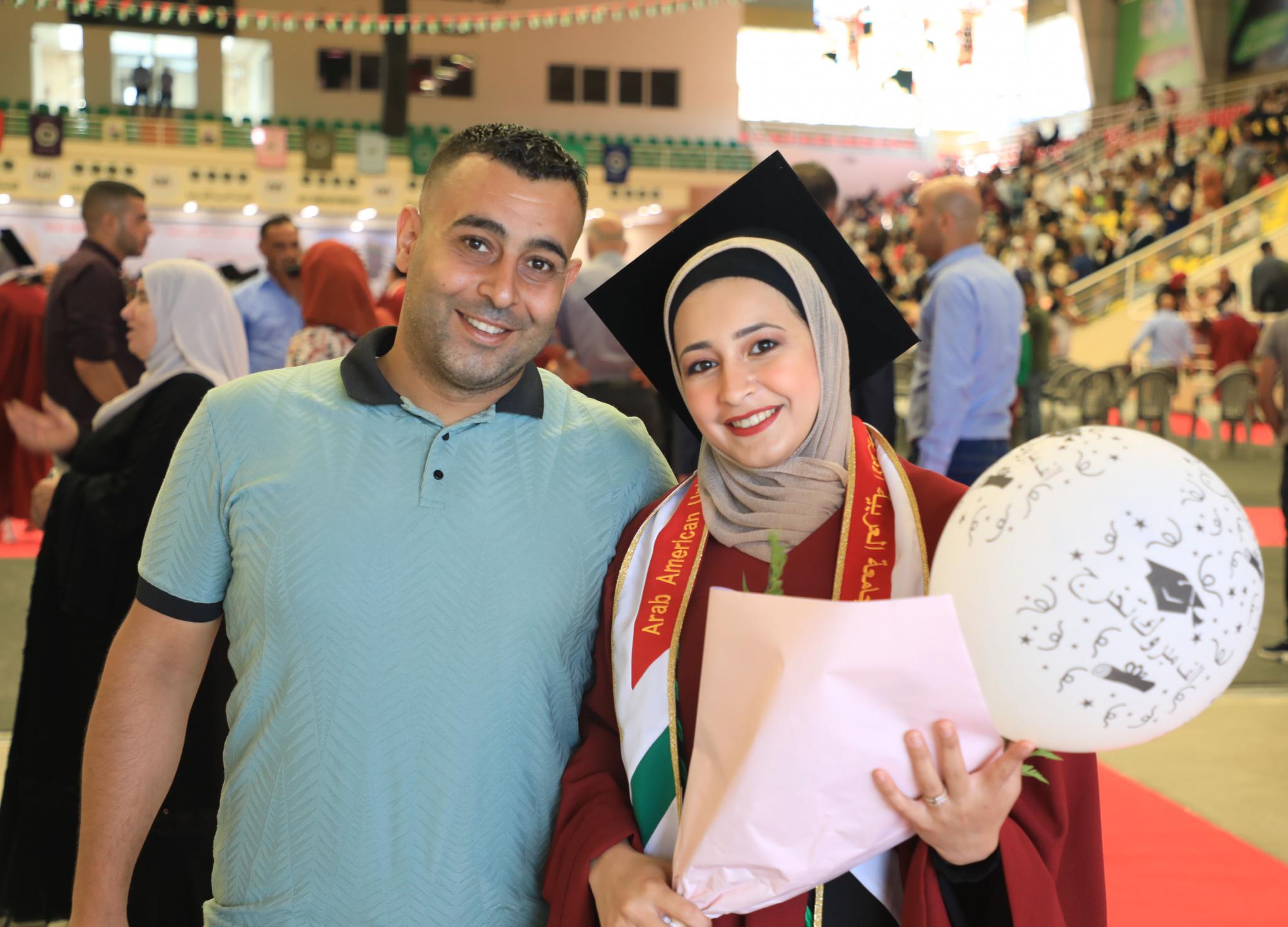 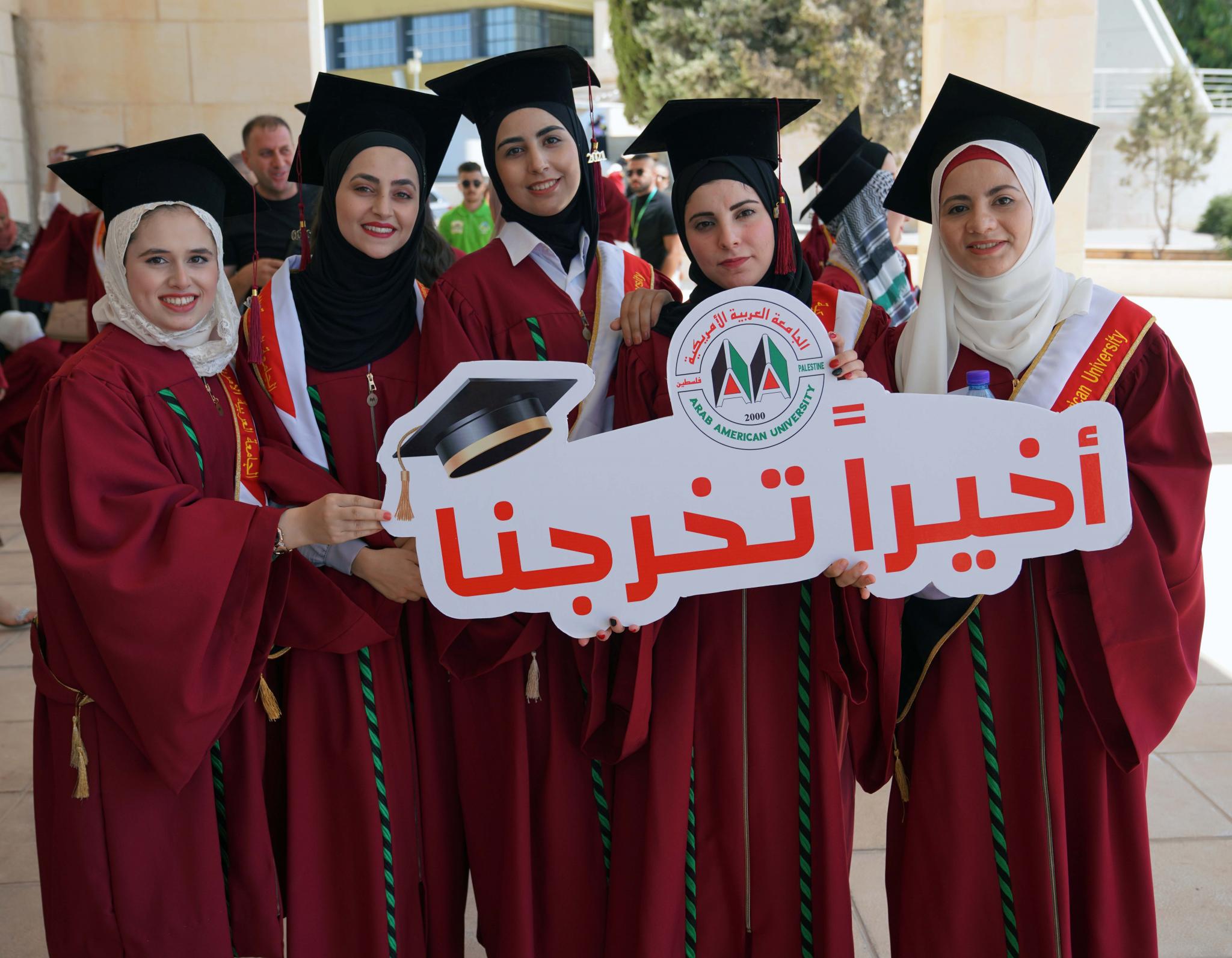 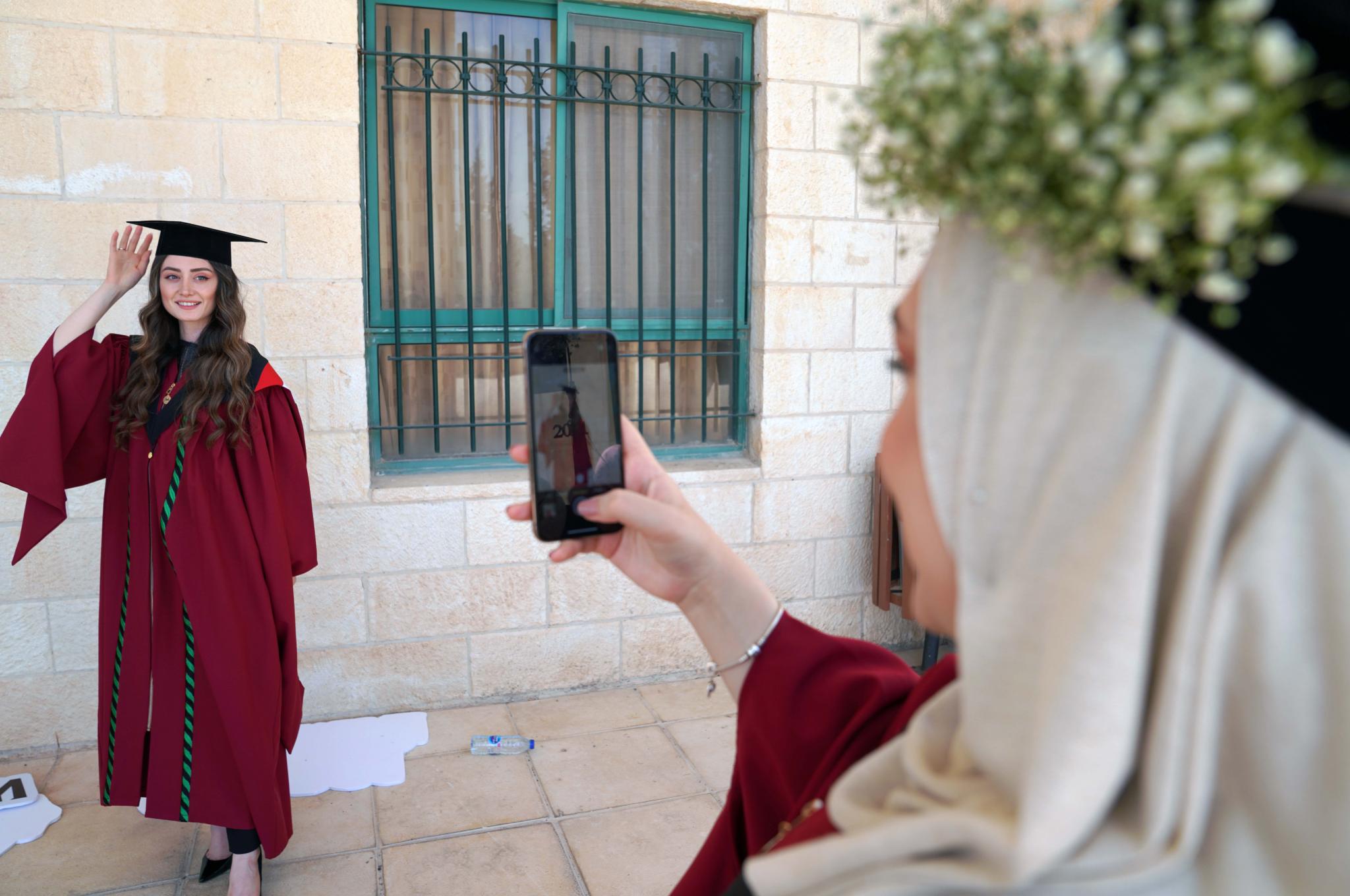 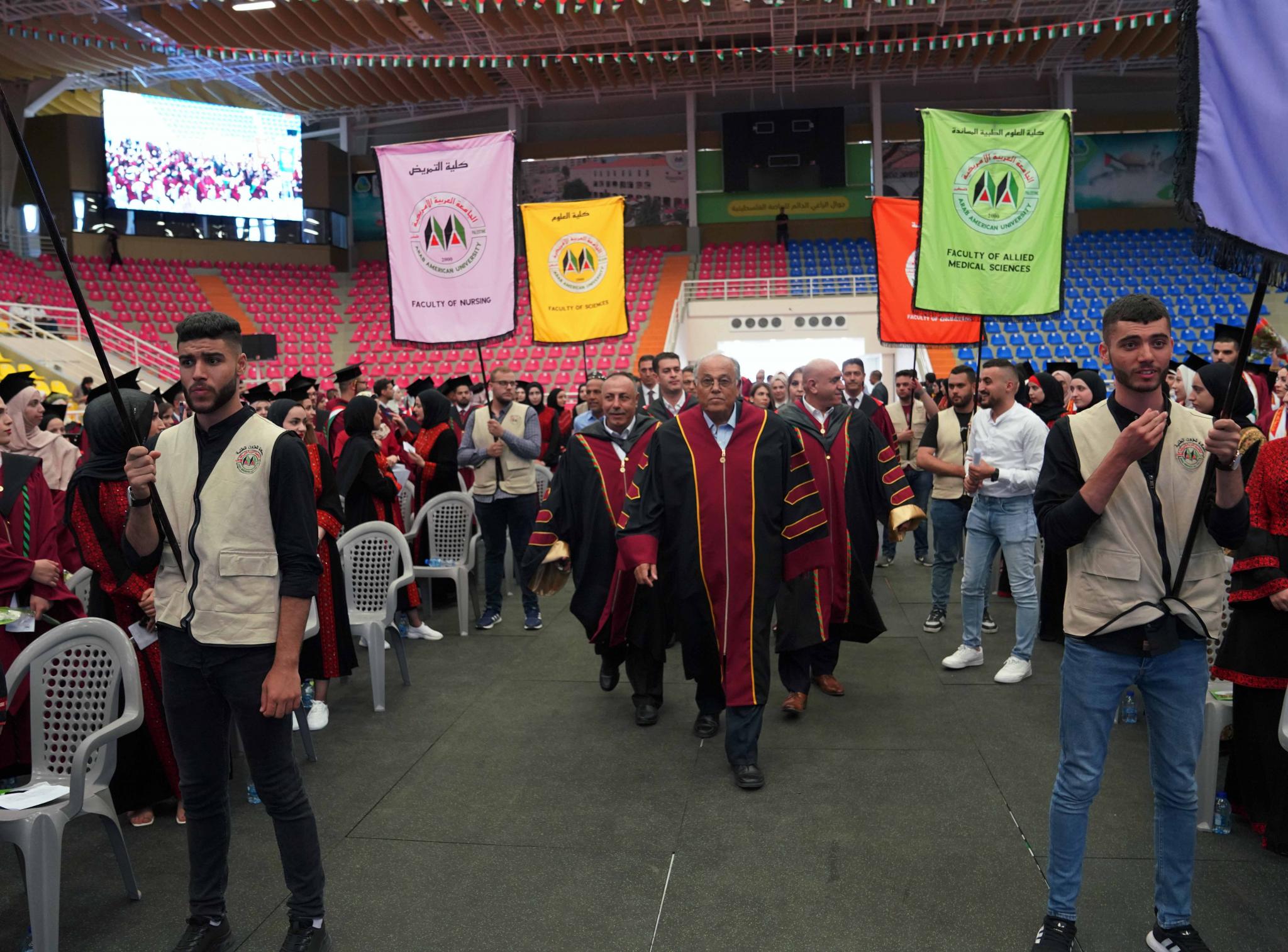 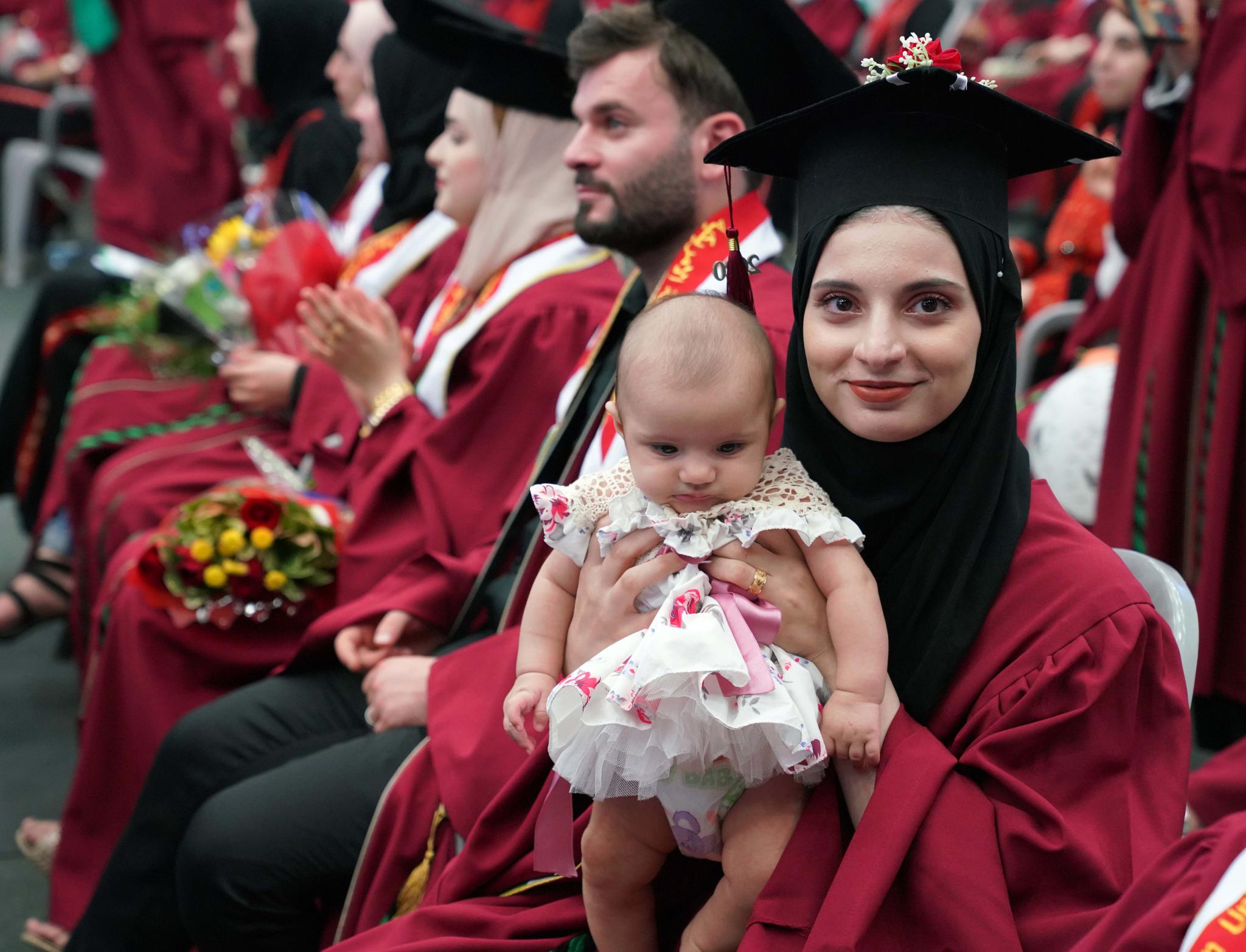 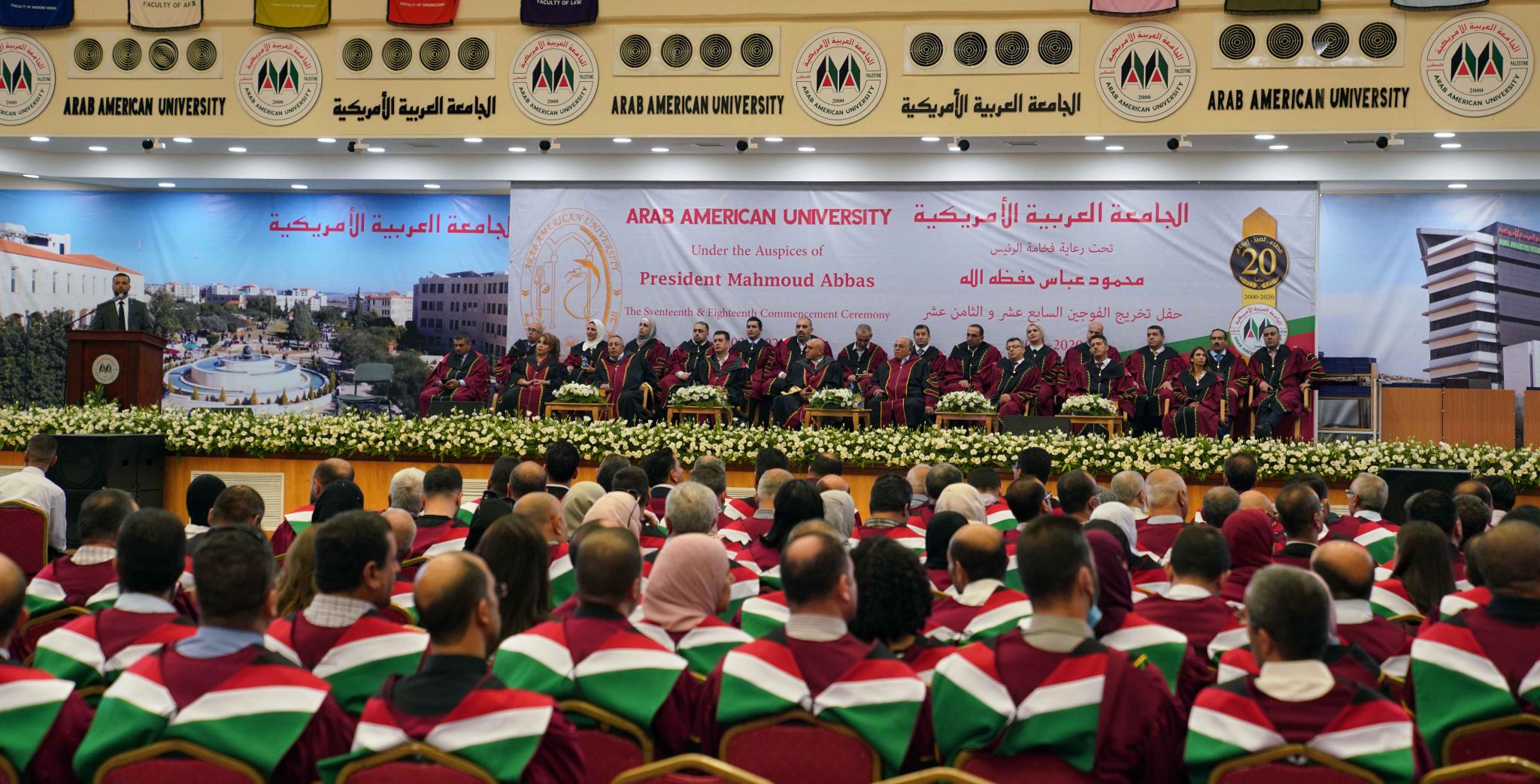 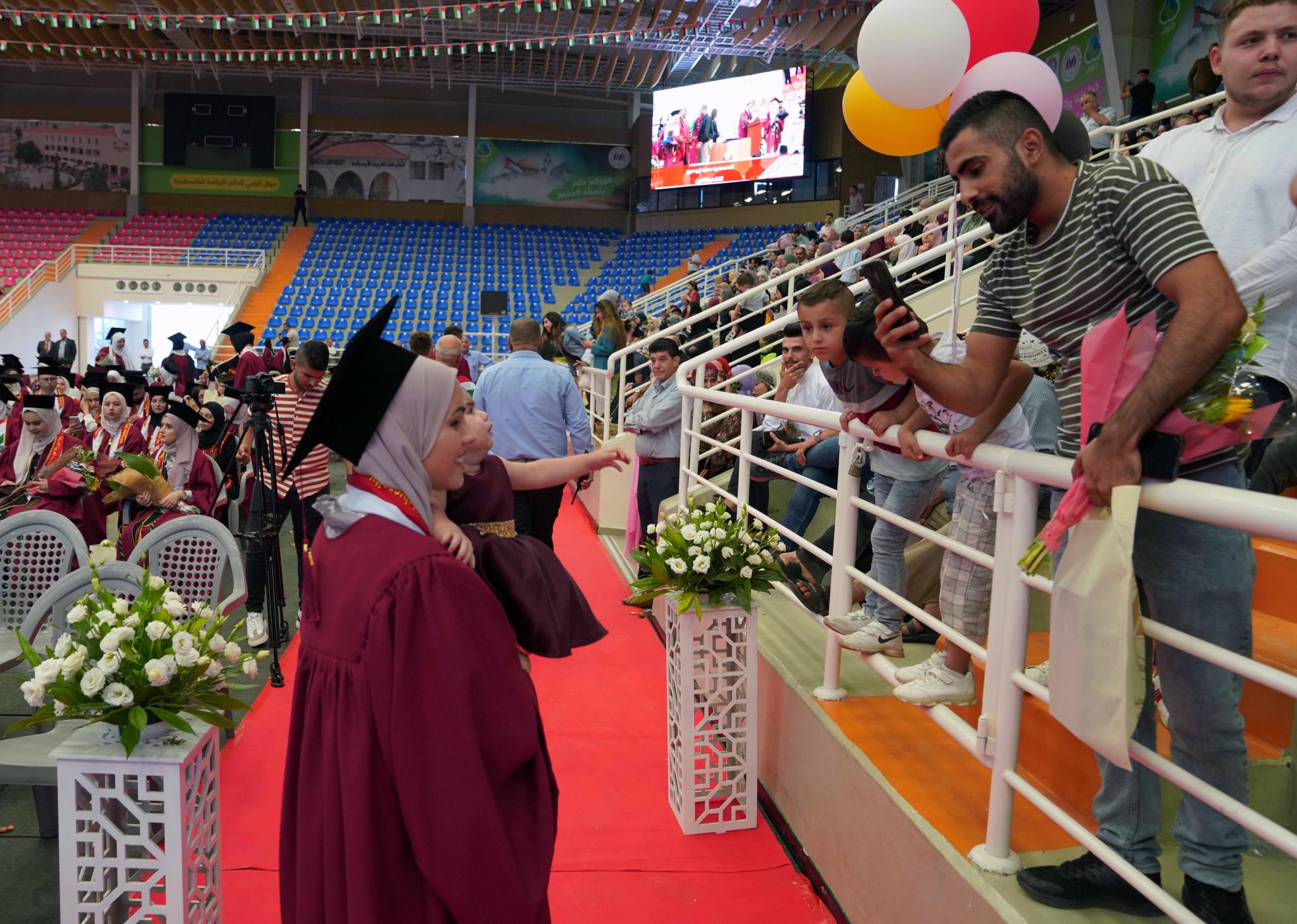 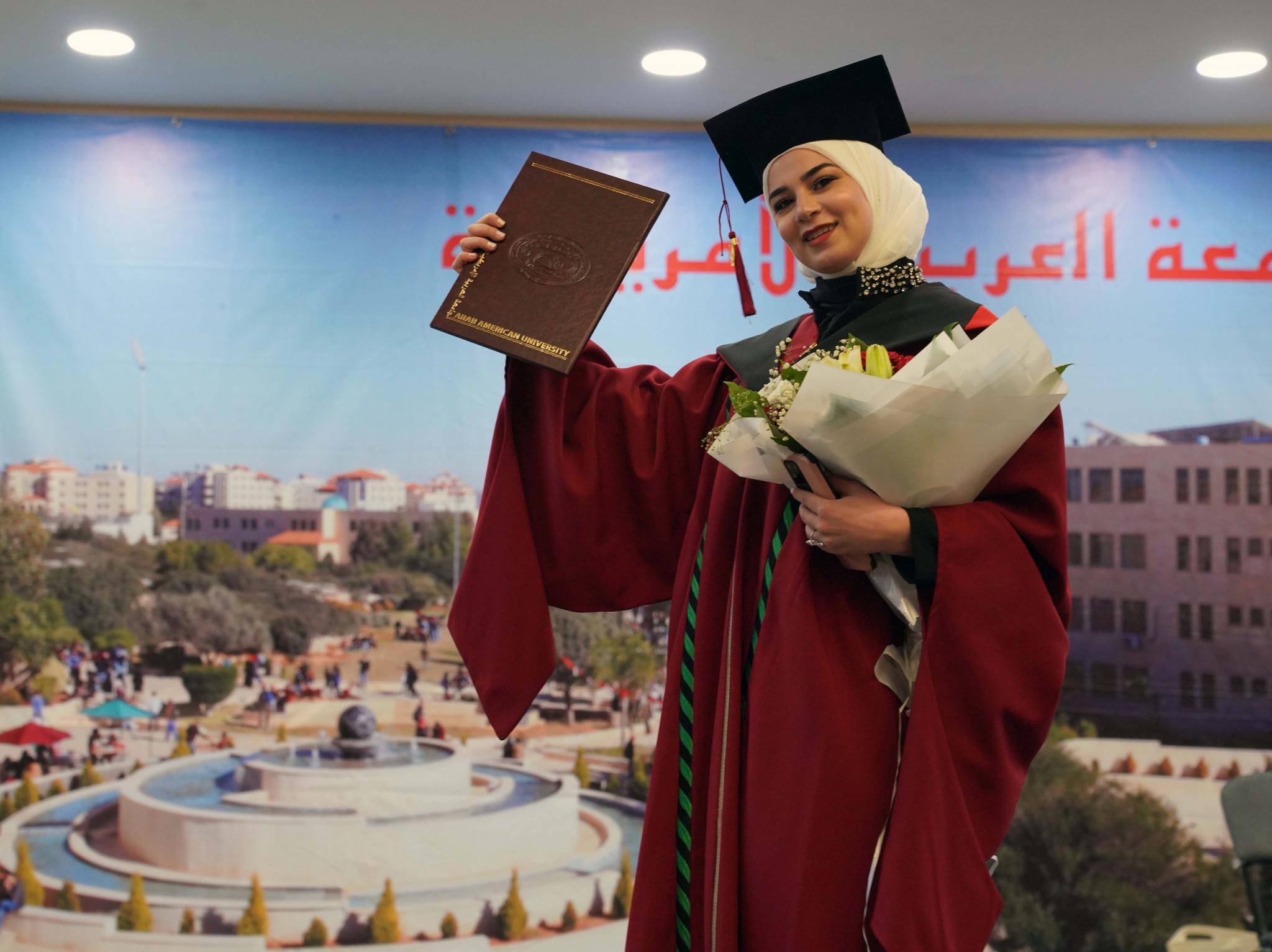 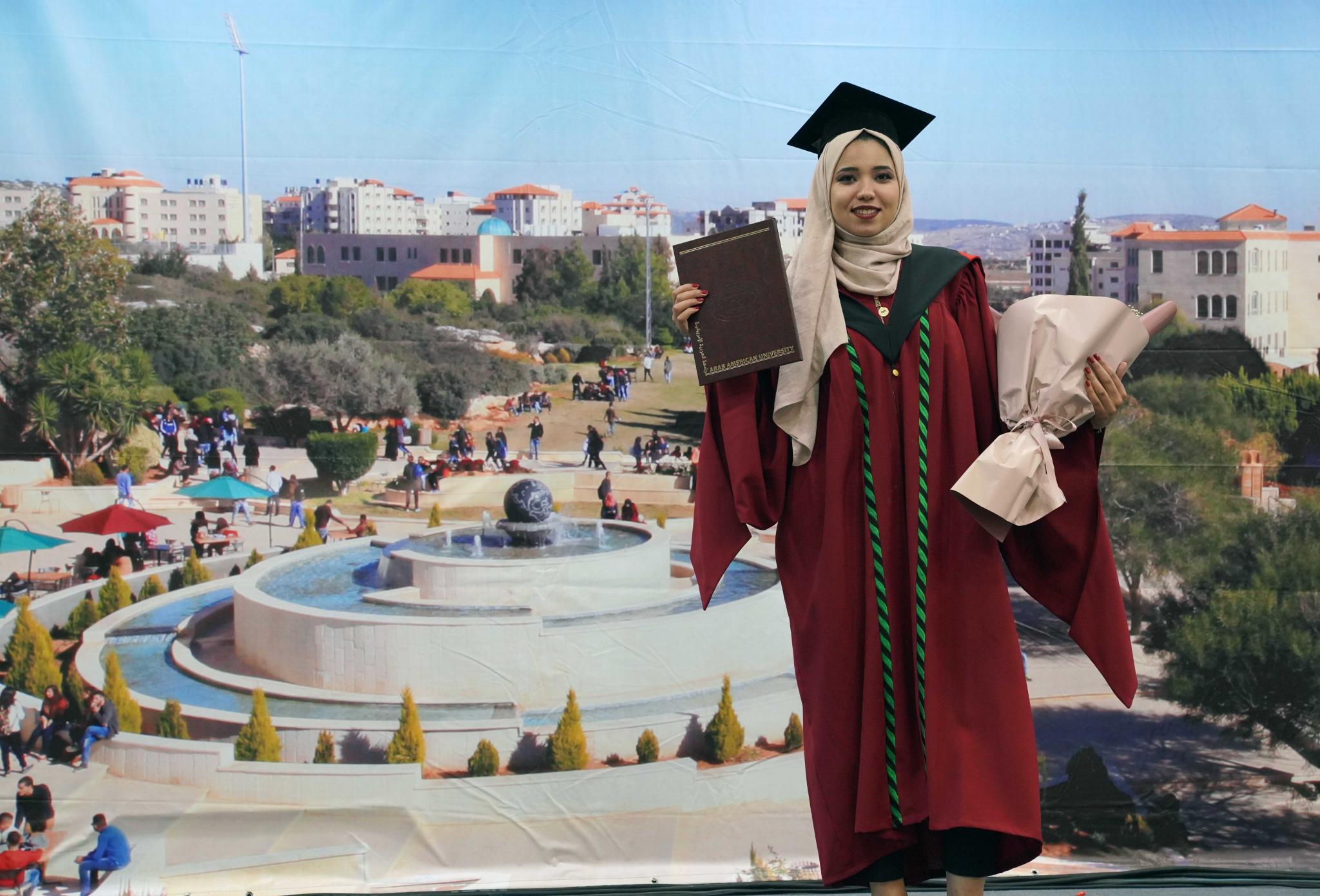 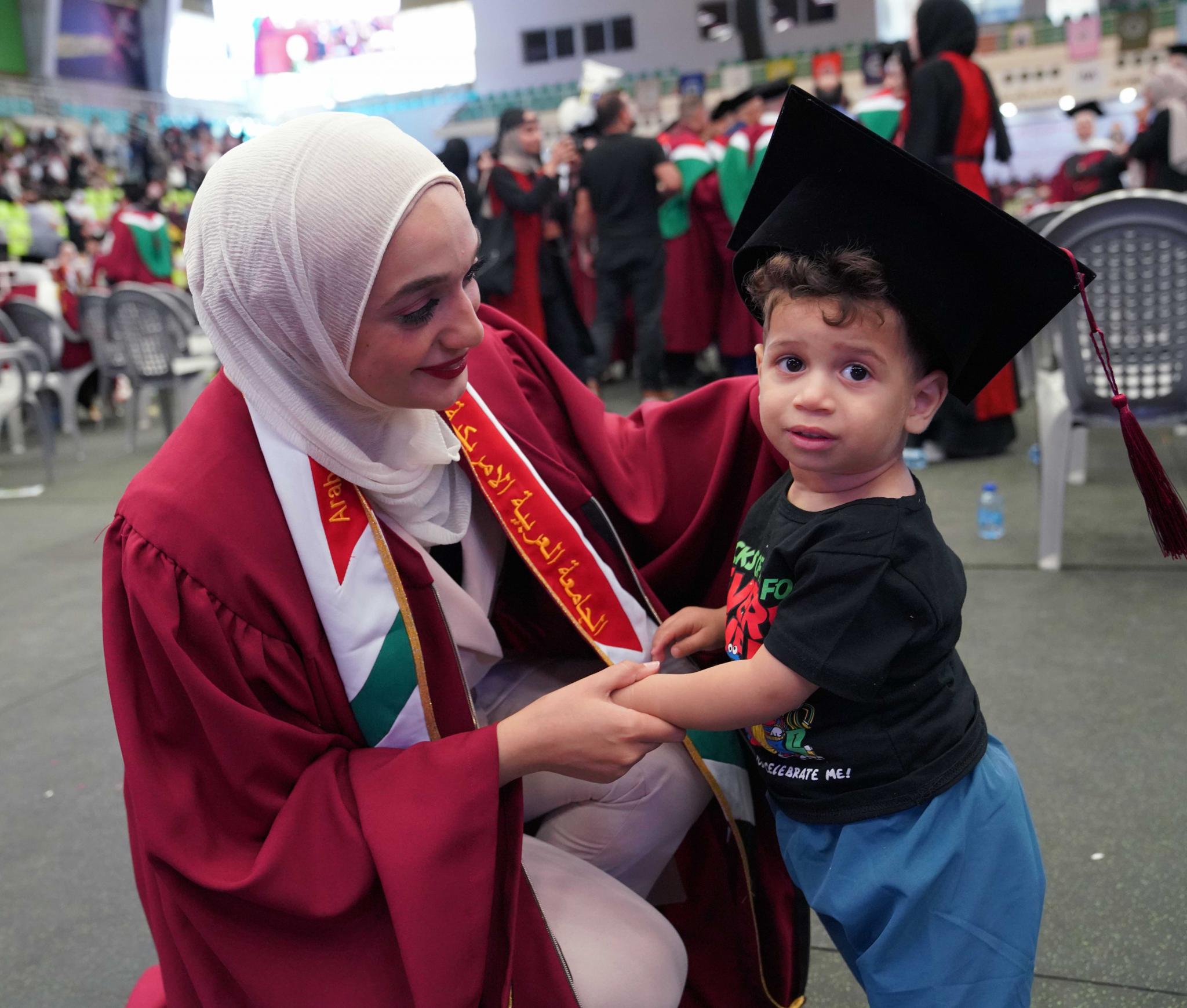 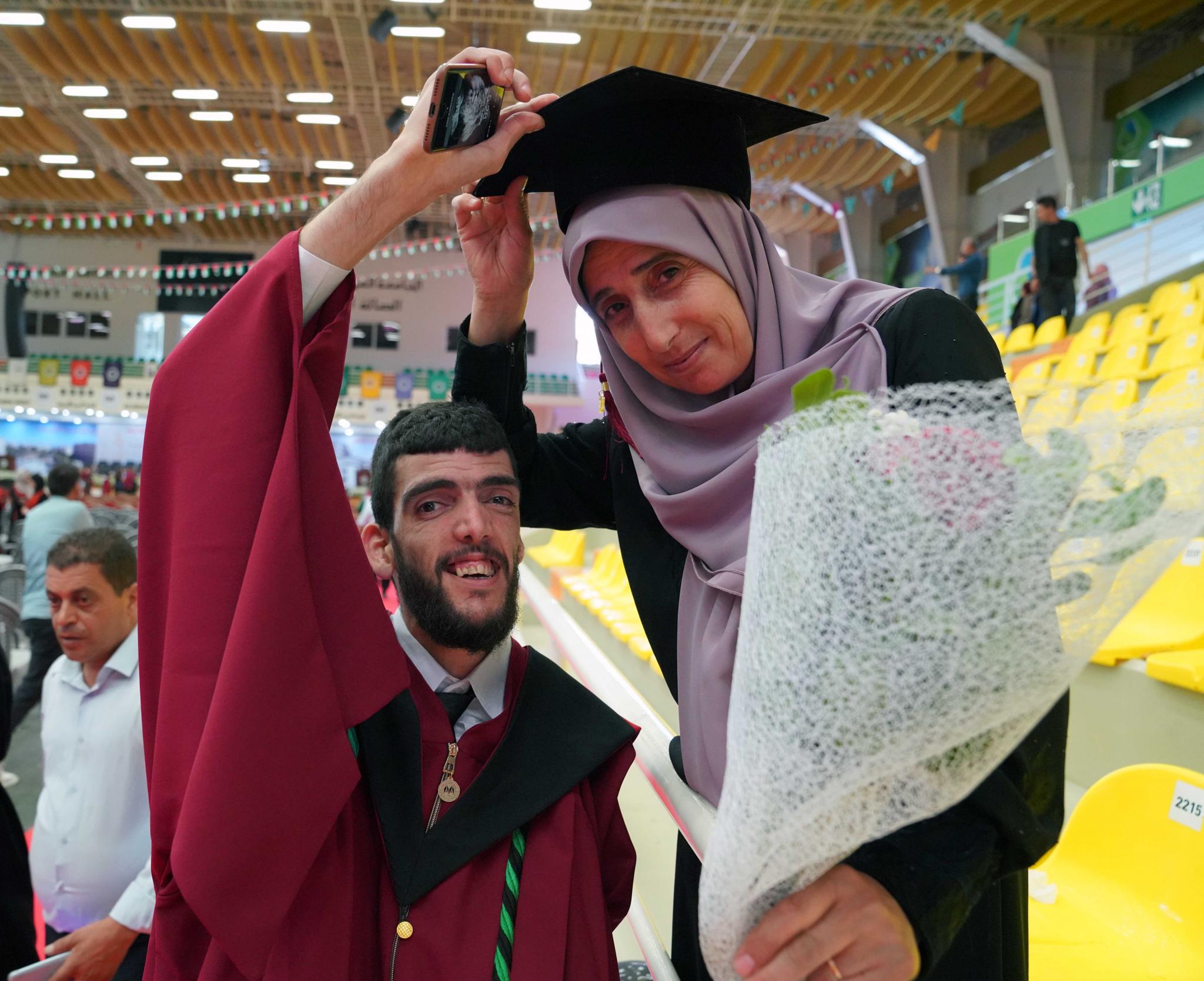 AAUP Celebrating the Graduation Ceremonies of its 17th and 18th Cohorts from the Faculties of Dentistry, Engineering and IT and Sciences
23 Aug 2021
END_OF_DOCUMENT_TOKEN_TO_BE_REPLACED