In cooperation with the Ministry of Culture, the University organized a seminar entitled "The Role of Culture in Economic and Social Development", on the occasion of the 100th anniversary of the birth of one of the legends of economy and culture Rifat Sedqi Nimer. 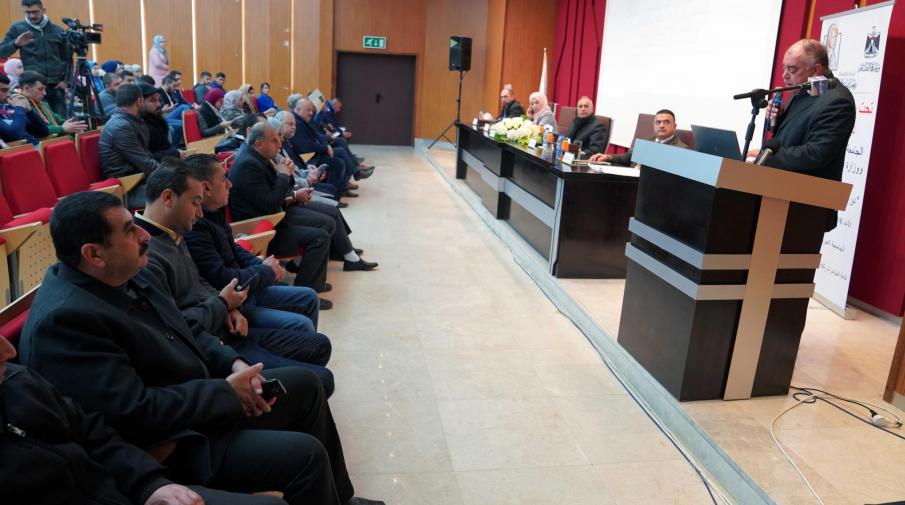 With the presence of the Assistant President of the University for Community Affairs Dr. Iyad Dalbeh, Deputy Governor of Jenin Kamal Abu Rub, Director of the Culture office in Jenin Amal Abu Ghazal, Representative from The Palestinian Consultative Staff For Developing NGOs (PCS) Moatasem Zayed, Director of Bank of Palestine in Jenin Mahmoud Hammad, Deputy Director of the Ministry of National Economy in Jenin Jalal Abu Bakr, and members of the faculty and representatives of government institutions, NGO’s and security sectors.

The seminar was opened by the Assistant President of Arab American University for Community Affairs Dr. Dalbeh, on behalf of the President university he welcomed the audience, and assured the importance of participating students in extracurricular activities to enhance their self-confidence.

He presented a working paper about economic development in Jenin governorate, in which he referred to the effects of the economic sector in Jenin as a result of the shopping of the Palestinians living in the 48 territories in Jenin. He called for the Authorizers to improve the economic and tourism facilities in the governorate, in order to provide a suitable environment to receive Palestinians living in the occupied territories during their shopping.

Deputy Governor of Jenin Kamal Abu-Rub praised the role of the Ministry of Culture for holding the Centennial Event of the birth of one of the legends in economy and culture, and thanked Arab American University for hosting this workshop.

The director of the culture office in Jenin Amal Abu Ghazal, talked about the life of Rifat Sedqi Nimer, who became one of the legends in economy and culture. As he had many interests in cultural fields and national identity.

The Centennial Coordinator in the Ministry of Culture Huda Hijo talked about the Ministry project for reviving centennial personalities who had a national cultural belonging.

The director of Bank of Palestine in Jenin Mahmoud Hammad addressed the role of the bank in supporting culture and the local community, assuring that the private sector cannot achieve its developmental goals without the partnership with relevant institutions.

The Representative of the Palestinian Consultative Staff for Developing NGOs (PCS) Moatasem Zayed discussed the role of culture in social and economic development, assuring that development can only take place with the culture, which is an essential part of development.